If all consumer audio shows came off like the California Audio Show held August 9-11, I’d be one happy camper. Hosted by dagogo.com publisher Constantine Soo at the Westin Hotel adjacent to the San Francisco airport the exhibits were well laid out, the ground organization responsive, even the unpredictable weather in the “city by the bay” cooperated. Laid out over sections of three floors including the lobby level attendance seemed pretty steady over the three days.  Anecdotally exhibitors reported “interested” attendees not just looky-loos suggesting some potential follow-up sales once the smoke clears.   There were some conspicuous absences as might be expected as the number of regional shows has increased.  The likes of  MBL, TAD, Magico,  and Rockport were sorely missed, but there were some great sounding setups and  also some real news. Here is an opening snapshot: 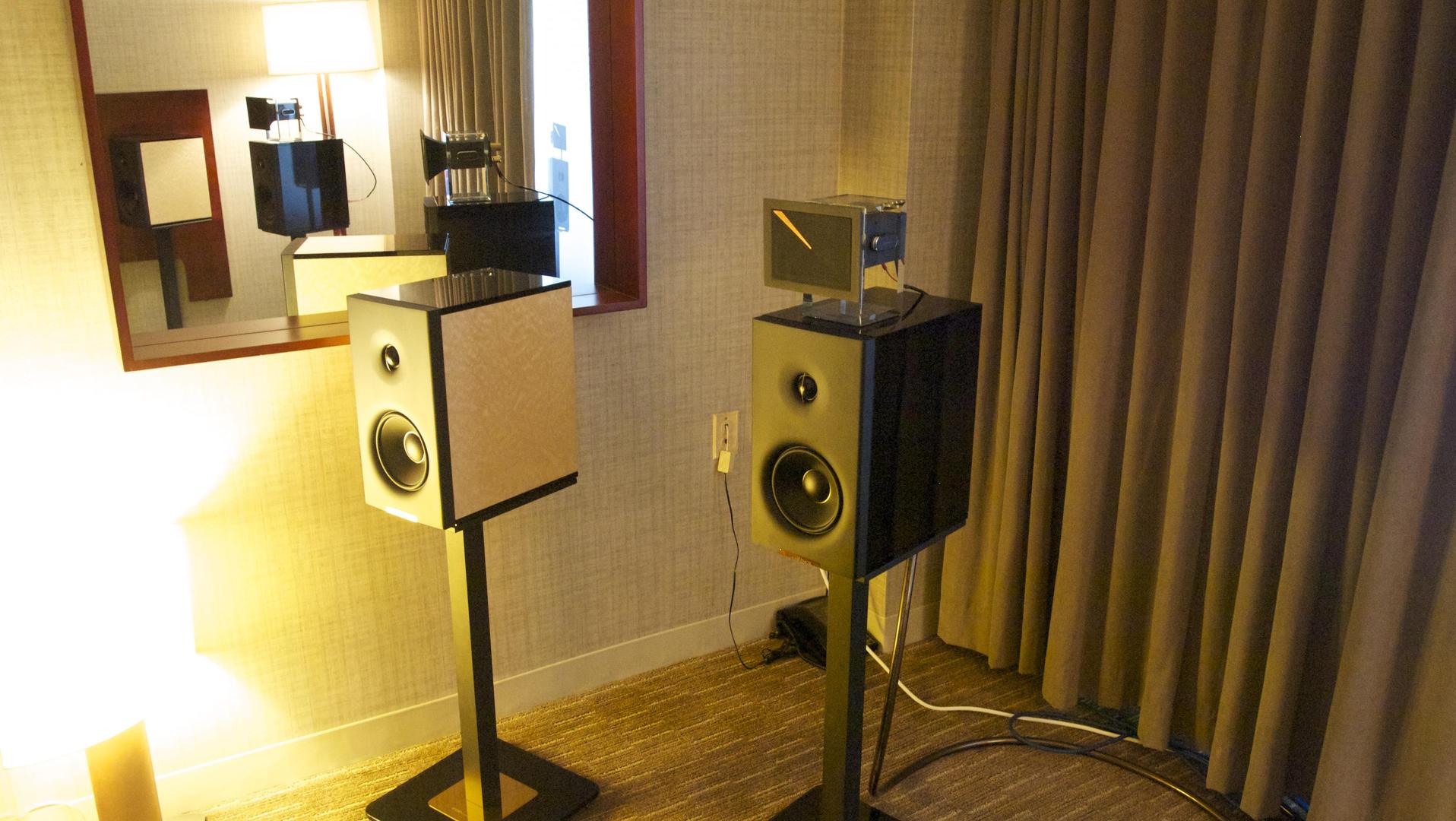 Enigmacoustics already known for its Sopranino electrostatic super tweeter. And it was being demoed atop a pair of Magico V3’s in one room. But an aftermarket supertweeter is for many really only an accessory so what would be the next logical step forward?  A bundle! Or a tandem if you prefer. And it’s called The Mythology M1, a sophisticated two-way, stand-mounted compact with the Sopranino included. The reflex design features a mechanically optimized cabinet comprised of laminated birch ply, tempered glass top and bottom plates plus a thick, aluminum CNC baffle to house the midbass driver and oversize soft dome tweeter. The crossover point is a relatively low <2K but to my ear it presented no dynamic issues for the tweeter. Sonics were impressive–detailed and spacious with an ease and openness that instantly perks up the ear. As a stand alone product I was initially somewhat skeptical of the supertweeter piggyback concept assuming it would distort the HF balance but I couldn’t have been more wrong. It adds an element of spaciousness and air to the top end but leaves the intrinsic character of the speaker in tact. And even more is the case for the M1. The supertweeter  doesn’t color the sound. You only miss it when it’s gone! Note also that dedicated stands are included and reflect the same fine cabinet materials and finish as the Mythology. Dimensions look roughly to be in the Magico Q1 range. No coincidence I imagine.  The price is another matter. Not cheap at $15,000/pr but well shy of Magico territory.

Simply gorgeous was my take on the Acapella Atlas system in Loggie Audio’s Magnolia room (top image).  It revealed little in the way of traditional horn style artifacts, only powerful dynamic reserves that made it appear as if it was coasting.  Chorale music was spacious, with an inner detail that nearly delineated every chorus member.  A relatively compact, 93dB sensitive speaker that utilizes Acapella’s hyper-spherical horn configuration in concert with the  cabinet inset ion tweeter. $99,000 It was brilliantly driven by Acapella’s own LaMusica integrated amp ($99,400), a  hybrid design coupled with the Einstein “The Source” CD player and linked by Acapella’s “Authentic” cabling, a pure solid silver ceramic insulated design.  When the setup sheets lists “inquire” for the prices, enough said is my response. 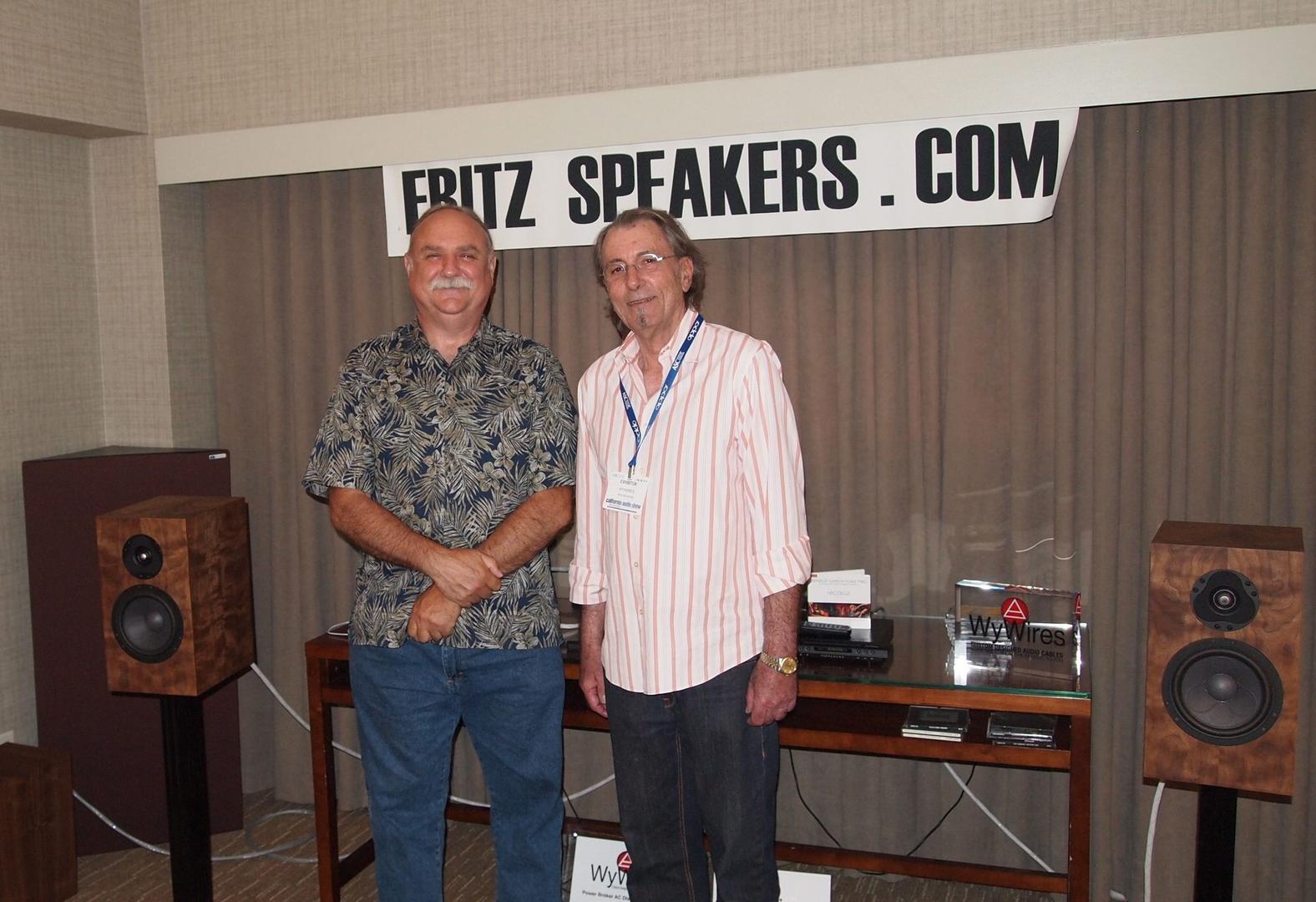 Too expensive for your blood (and mine) I felt considerably more at ease in the company of John “Fritz” Heiler and Wywires cable guru Alex Sventitsky in their more modest third floor room. The small room system consisted of Heiler’s Rev 7 speakers ( $3500/pr, the R is for Revelator drivers), a Wyred4 sound mint integrated amp and DAC plus Wywires’ cost efficient Blue  Series cabling. I was in familiar territory with this system having reviewed the Carbon 7 in Issue 219 and the Wywires Blue Series coming up in Issue 236. These guys really dialed in the sound producing a richly illuminating midrange with smooth highs and rewarding midbass energy. Not the stuff that will obsolete a subwoofer but an impressive presentation nonetheless and a tribute to experienced setup procedure.