NAD electronics has been marching down audio’s red carpet for years, picking up awards and accolades from high-end journalists and customers alike. Its classic BEE line—all buttons and knobs, and blue collar to the core—is still being turned out in sturdy but sensible, olive-gray stamped enclosures. Outward frills are kept to a minimum, and that’s always been NAD’s point. It’s the sonic thrills rather than the visual bells and whistles that customers have come to expect, and that keep them coming back.

The Masters Series represents the more uptown side of NAD. Stylish and sophisticated, this is a company flexing its technical muscles while preserving the underlying value it is famous for.

In case your experience with NAD electronics ended with the original, circa-1978 3020—the modest integrated amp that addicted many a young audiophile to this hobby—you’ll be in for a big surprise. The latest generation Masters Series (the originals were introduced in 2005), as embodied in the M12/22, is unreservedly gorgeous. The aluminum casework is elegantly crafted. Its shiny black, accented front panel and vented top plate are sumptuous to the eye and the touch. Both units are powered-up via a recessed top-mounted switch. The M12’s large, readable touchscreen display easily handles functions normally left to a small army of buttons and toggles. The only vestige of a bygone era is the nicely weighted rotary volume knob. For that, let us all give thanks.

The M12 is a preamplifier/DAC—a high-end segment that has been growing in leaps and bounds. Like the M2 Direct Digital Amplifier, and more recently the C 390DD, the M12 employs its own “Direct Digital” 35-bit processing technology, thereby circumventing all analog stages in the signal path. Music remains in the digital domain through the preamp. By NAD’s reckoning this eliminates the phase shift, noise, and distortion of many analog designs. 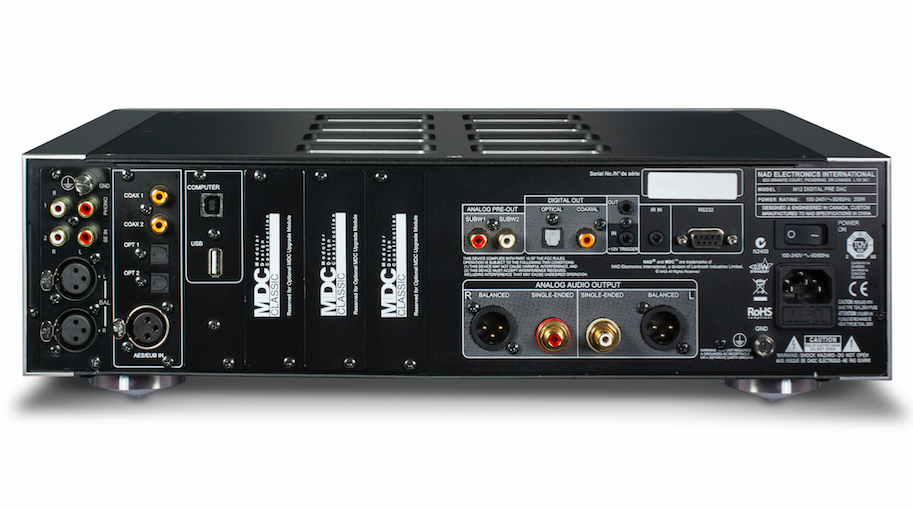 Before I describe back-panel connectivity, a word or two is needed about a unique feature of the M12 architecture. NAD calls it “Modular Design Construction” or MDC, and it looms large in the Masters Series. MDC uses replaceable cards that fit into slots on the M12’s back panel, essentially making the unit future-proof as upgraded features become available. The M12 back panel has slots for three additional modules. Currently one such MDC option is the DD HDM-1 HDMI module with three inputs and one output (3D video pass-through). My M12 review sample, however, was outfitted with the optional DD BluOS network-audio module, which permits streaming of various music services like Tidal and TuneIn radio, plus high-resolution PCM files (no DSD yet) from a NAS device or local USB HDD/SSD. The NAD Controller App (from the iTunes App Store) manages a music library and can be controlled with an iOS or Android device. The card includes integrated WiFi/Ethernet and aptX Bluetooth connections for hi-res streaming from a smartphone or tablet. For Millennials this module is likely a must.

Even without the DD BluOS module, standard M12 connectivity is excellent. The back panel is densely populated with inputs, including AES/EBU, asynchronous 24-bit/192kHz USB Type B, coaxial digital, and optical digital, along with balanced and single-ended line-level. There are also front and rear USB-A inputs capable of 24-bit/48kHz resolution. Additionally there’s a pure Class A buffer using the newest generation of “Super OP Amps” to provide low-impedance balanced and single-ended connections to power amplifiers or active loudspeakers. Also resident is an mc/mm phonostage module with settings for both moving-magnet (mm) and moving-coil (mc) cartridges. Gain is set automatically. Vinyl lovers should keep in mind that with Direct Digital processing a 24/192 ADC will convert the analog signal to digital, automatically setting the gain for the best resolution and lowest noise. The included remote control handles all functions quite capably.


Master Stroke
NAD describes the M22 as a hybrid digital amplifier. Output is rated at 250Wpc into 8 ohms, and >650W into 2 ohms. In NAD’s words, the M22 “uses the latest nCore amp technology licensed from Hypex.” Further refinement of the UcD concept (Bruno Putzeys was its inventor) has yielded distortion that in NAD’s words is now “below measurement, [providing] an ultra-high damping factor and unconditional stability with any speaker.” Additionally, the M22 is DC coupled throughout, from input to output. There is no capacitor in the signal path. The power supply is a custom switch-mode design, while secondary supplies are individually regulated and decoupled at each op-amp to maximize dynamic range and lower noise. The M22 employs NAD’s latest generation of digital Power Drive, which automatically senses the speaker’s impedance and adjusts and controls the amp’s power envelope to more efficiently drive that particular load.

Getting Up and Running
The touchscreen menus are well-organized. The main screen lists the input and volume settings in large script, while smaller shaded boxes indicate current preferences. Settings include: Mode for polarity, reverse, and mono and stereo options; EQ for treble, bass, and balance; and a disable option. Setup is divided into four subsections: Source for renaming inputs; Digital Output for selectable sample rate; Control Setup for IR and auto-standby options; and Speaker for adding and optimizing a subwoofer in a 2.1-channel configuration (including a second-order high-pass and low-pass crossover with selectable frequency).

Activating the DD BluOS module was as simple as connecting an Ethernet wire to the LAN connection. The NAD Controller App instantly recognized my WiFi network from my iPad Air 2. Logging in to TuneIn was easy, but finding my Synology NAS was another matter.

Fortunately NAD is sympathetic to the plight of the computer-phobic, and aware of the fact that hooking up an existing NAS with a DAC/renderer can be a bit of a nail-biter. It offers a couple of helpful options if you get stuck (as I did). First there’s online help at support.bluesound.com, where I searched for instructions and found (Eureka!) the document titled “Synology NAS and Network Discovery Configurations.” Alternatively you can email (as I did) to [email protected] I got a swift response, and within about five minutes, was up and running. In my particular situation the fix was easy—I needed to enable “Guest Access” from the Synology in order for it to broadcast its shared folders to BluOS. Not a big deal, but NAD’s help probably saved me hours of fruitless fiddling.

Sonically the M12/M22 system will remind NAD followers that there is a bloodline here. These components remain true to NAD values in the way they prize midrange neutrality and integrity, yet also throw hints of warmth and richness into the mix. However, the M12/22 begins to depart from NAD tradition in subtle but important areas. Particularly rewarding is its broader, more crisply defined sound at the frequency extremes, where earlier NAD amps often softened up just a little bit. As I listened to Nojima Plays Lizst [Reference Recordings], the greater extension and air that the Masters separates brought to this recording were striking. Harmonics seemed to radiate and rise into the soundspace without a ceiling hanging over them. There was a stronger bell-like quality to hard stabs of the keyboard, and greater fluidity to the lighter touch of Nojima’s arpeggios. Importantly, the top-end and the midrange sounded seamlessly co-joined. There was no sense of treble information “kicking in” suddenly. This benefitted resolution in countless ways. Low-level details were conveyed with superior clarity, which enhanced my ability to locate instruments within the mix. The M12/M22 also provided a level of immediacy that further enlivened recordings. Familiar singers such as Holly Cole and Norah Jones were reproduced with an intimacy that made me feel like a fly on the wall of the recording studio. Perhaps because of the Masters Series’ improved micro-dynamics, transient speed, distortion, or all three in combination, I found a jaunty playfulness in the 24-bit/96kHz version of Malcolm Arnold’s Sussex Overture that I haven’t always heard in the past. This well-known bon-bon, overflowing with orchestral humor, color, and contrast, needs a similarly acrobatic system to let it blossom. 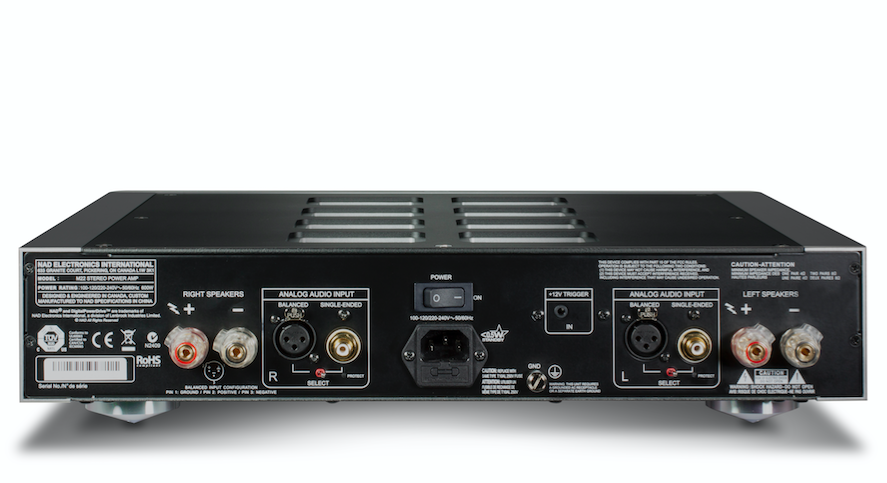 While the NAD duo maintains a solid grip on the midrange, imaging and soundstaging have also firmed up. I’ve been listening a lot to tracks from the LP VHS from the alternative band X-Ambassadors (including the hit “Renegades”—an alt chart-topper). The quartet is led by lead singer, co-writer, and multi-instrumentalist Sam Harris. His brother Casey adds keyboards. Fronted by Harris’ full-throated baritone, which can leap between a rich, chesty timbre and an angelic falsetto, the band serves up jousting polyrhythmic tracks with chant-like backgrounds. Soundspace plays a large role in many of these arrangements. Like the negative space in a photograph, the songs live within their ambient minimalism, with low-level contrasts and pauses followed by strong, explosive, colorful hooks and choruses.

The Masters Series’ bass response was startling. It’s bold and extended with an iron-fisted grip that not only sounded deep during Copland’s Fanfare for the Common Man [Reference Recordings], but which also provided superior pitch definition and tunefulness. In a large measure, this system represents the maturity of Class D bass. Many will remember that even in its earlier iterations, Class D bass response, though its key strength, produced textures and timbre that were often homogenized and overly controlled. The NAD system allowed me to hear more of the dynamic contrasts and harmonic complexities that define the timbre of a bass drum or a tympani or a tom-tom. A prime example of M12/22 capability was the seemingly infinite amount of expression and color that five-string double-bassist Renaud Garcia-Fons [Solo: The Marcevol Concert] manages to snap, pluck, or bow from his instrument—from rattling percussiveness to soothing, lullaby-like fluidity.

So how does the NAD duo stack up in the company of a couple of integrated amps from the “old guard,” such as the Pass Labs INT-250 (review forthcoming) or my current reference, the MBL C51? An amp like the Pass will reproduce ambient and reverberant space just a bit more vividly. It edges the M12/22 in the specificity of individual images, too—chorus members achieved an added level of focus, for example, during Rutter’s “Praise Ye the Lord.” The MBL, on the other hand, is all about the sweetness of upper-octave piano and violin, and the air riding above the harmonics. During Peter Gabriel’s “Don’t Give Up,” it has superior resolution of the delicate percussion accents, the ride cymbal, the Kate Bush vocal (of course), and the bouncing bass patterns and synth pads. The NAD often matched the Pass and MBL in bass performance, particularly in grip and pitch definition. The Pass had the darker, weightier signature; the MBL was a bit warmer overall. But all three integrated amps graced the music with convincing timbre and bloom. In sum, the NAD held its head high in this exalted company. Very high.

Once upon a time, NAD gear was thought to be great entry-level componentry but ultimately a stepping stone to something more fabulous and more refined from some other maker. Not so fast, and not this time. The NAD Masters Series M12/M22 combo proudly holds its own in pretty much any company. And it scores points at all levels—refinement of sound, classy execution, and cool, cutting-edge modularity that gives it attractive and sensible “have-it-your-way” appeal for the old guard and the network-savvy alike. Sensible, serious, masterful.