In NAD lore, “3020” are hallowed numerals. The long-ago integrated amplifier that bore that designation might have been a barebones affair, but it marked a departure from the budget norm when it first debuted in 1980. Built solidly, without extraneous signal-robbing bells and whistles, the 3020 offered musical truth in its tonal balance, lack of coloration, and dynamism in spite of its conservative 20Wpc specification. Music lovers responded en masse; more than one million 3020s have been sold— an astounding number for a high-end product.

Now, the 3020 is back with a “D” prefix for clarification. A capital “D.” As compared with the all-analog original, the new D 3020 is a digital animal designed primarily for computer/USB sources. Power output is a solid 30Wpc thanks to NAD’s ultra-compact Class D topology. True to NAD tradition the amp’s power rating is deceptive in that it can output bursts up to 100W (into 4 ohms) during dynamic peaks. In digital connectivity, it offers aptX Bluetooth music streaming—an efficient alternative to Wi-Fi—plus a USB input that plays back computer-based music in up to 24-bit/96kHz resolution, and operates in asynchronous mode to ensure low jitter.

Nothing can prepare you for just how compact the D 3020 is when you first encounter it up close and personal. Truly a design for our times, it’s improbably small and portable with a vertical form factor that lends it the visual profile of a network router. And I hasten to add, portable enough to be drafted into service as a headphone amp. Note that where space requires, it can also be positioned horizontally.

A top-panel touch control powers the D 3020 on, and the vertical front panel of inputs and volume indicators blinks to life for a few seconds. The gradations of the large volume control are indicated in 20dB numerical steps, the display fading or intensifying as the user makes changes. The look is nifty but I didn’t get much of a sense of precision as I navigated up and down—only a rough idea of where the volume was actually set. 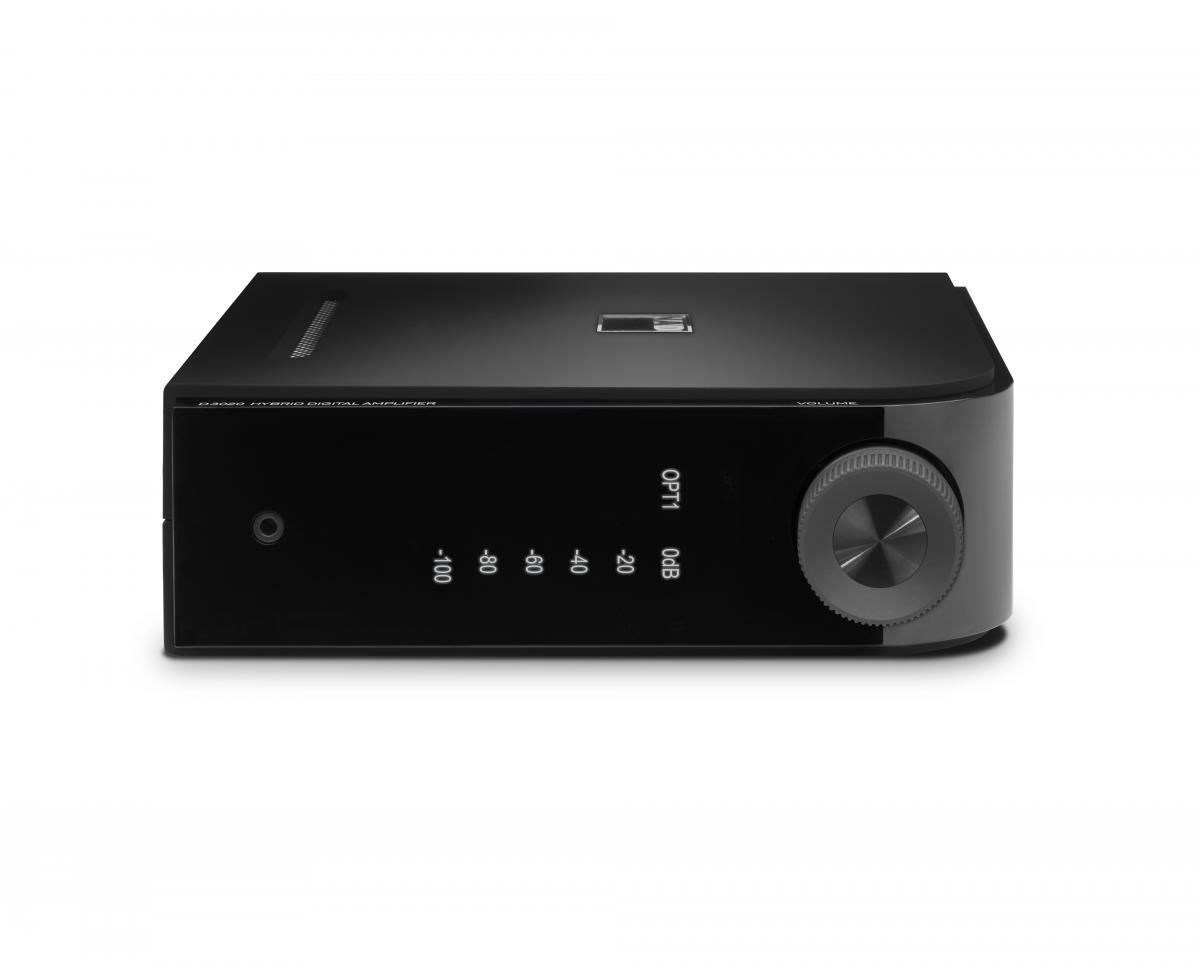 The back panel hosts a trio of digital inputs which includes USB, SPDIF, and Tos-Link plus a subwoofer output and a single, lonely analog input. Additionally there’s a bass-equalization toggle and a multi-purpose auxiliary input that can be used either as a headphone jack from a MacBook Pro or, with the supplied TosLink mini-adapter, as an extra optical input. In a nod toward energy efficiency, when the amp doesn’t sense a signal for about fifteen minutes it reverts back to a 0.5W standby mode.

Operationally I’ve only got a couple of nitpicks. The lack of a mute button seems a weird oversight. Also the iPod-style IR remote is all flat-black, including the navigation buttons. The only way to see what you’re doing is to angle the remote so that it catches a glint of light to illuminate the markers. Most of us will memorize the six key buttons (on/off, volume +/-, and source select arrows), but really!

Sourcing my hard-drive-based music collection via USB was a snap; however, I was more impressed by how easy it was to get Bluetooth (BT) up and running— an area where I’ve occasionally run into snags in the past. Here, I simply selected Bluetooth from my Mac’s SYSTEM PREFERENCES and made certain BT SHARING was selected within the SHARING submenu. This made the D 3020 discoverable as a device. A simple click to connect and, after opening iTunes, I was instantly listening to one of my own “stations” on iTunes Radio. While the sonics of Bluetooth are more geared to convenience than to our inner audio connoisseur, I’d be lying if I didn’t admit that it sounded darn good—not as open and dynamically sophisticated as the high-res USB connection but far better than I remembered from previous BT experiences.

Speaking of sonic performance, the D 3020 for all its humble appearance is pure NAD. It’s firmly midrange-centered in its balance and never over-reaches in the sense of growing shrill on top or tubby on the bottom. Yes, it’s lighter in overall sound due to some bottom-octave attenuation, but the D3020 retains an essential presence, a midrange integrity, that sculpts the body of a performance and makes it live in the listening space. It also maintains a solid grip in the midbass, resolving Lee Sklar’s mellow bass lines with good pace and precision during James Taylor’s “Fire and Rain” [Warner]. Its response softens and loses definition only slightly when confronted with hard-charging electric bass pulses or the double-kick-drum rhythm figures flying off the feet of Metallica’s Lars Ulrich.

Vocals tended to sound a bit dry at times, an issue that affected female singers a little more than male ones. But multiple vocal images were generally very good. For example, during Jackson Browne’s “Colors of the Sun” [Asylum] the D 3020 reproduced a significant amount of the detail and interplay between the vocals of Browne and Don Henley.

While the specs and form factor of the D3020 suggest that it is ideally suited for desktop duty, I wanted to throw a wrench in the gears by giving the NAD a real shake-down with a highly esteemed compact loudspeaker, the Franco Serblin Accordo, a two-way compact of impeccable craftsmanship and provenance, and one of the last speakers authored by Serblin, who passed on in 2013. At 87dB the Accordo’s a medium-sensitivity loudspeaker with midrange and top-end response that are truly world-class. The D3020 never hiccupped at the challenge.

One of the liveliest recordings I have is the electrifying Jacques Loussier Trio playing The Best of Play Bach—a smile-inducing collection of jazz/classical bon-bons. The D 3020 handled the dynamics and harmonic and ambient density of this recording quite faithfully. There was some dynamic constriction and low-frequency pitch instability at moments, but overall performance from a sub-$1k 30Wpc amp has rarely been more impressive. And I admired the grip of this amp once again when confronted with the midbass tom-toms during Blood, Sweat & Tears’ “More and More” [Columbia]. Though piano timbre during “Sometimes in Winter” was a little cool, there was still a suggestion of the felt on the hammers damping the strings.

Perhaps the biggest surprise I encountered during my listening sessions was the quality and smoothness of the amp’s top end. This was a region where the Accordo tweeter would easily expose deficiencies, but the D 3020 met the challenge. As I listened to pianist Janne Mertanen play the Chopin Nocturnes [Alba], transient speed and harmonic openness were truly enthralling. Although there was a little bit of a ceiling over the performance—at least compared with pricier, wider-band amps that operate with more dynamic headroom—the D 3020 had little else to apologize for.

Although I’m an infrequent headphone user, whenever I don my AKG K501 cans (still terrific after all these years) I am always impressed by the gorgeous midrange tonality and intimacy these 120-ohm ’phones produce. As a headphone amp, the D 3020 does its job noiselessly and is musically satisfying. The tonal characteristics that make it so appealing with conventional loudspeakers translate fully to the more intimate world of earspeakers. Frankly I haven’t ever appreciated headphone listening as much I did during the time I spent with the D 3020.

If computer audio is your primary source for music, and Blue Tooth capability is a must, then the D 3020 makes a compelling argument. The other argument is, hello, its price tag of $499, making it by most standards a small miracle of packaging and portability, and with few exceptions a delight to use and listen to. Too small for you? NAD has you covered with a bigger cousin in the new D 7050—a streaming integrated with more power, advanced topologies, plus AirPlay wireless at $999. For many, however, the D 3020 will be just what the digital doctor ordered. Faithful to the original 3020 but totally dialed in to our times.