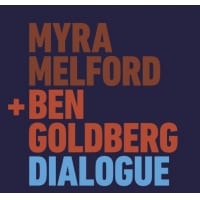 Since moving to the Bay Area a dozen years ago to teach in the UC Berkeley music department, pianist Melford has forged many tight creative relationships, foremost among them her collaborations with clarinetist Goldberg. Each has appeared on the other’s recordings, and the two have toured as a duo. Both are in equal measure composers, solo improvisers, and deep conversationalists, and Dialogue puts the first two identities in service of the third. On 13 tracks, none longer than six minutes, Melford and Goldberg anticipate and bounce off each other’s ideas and mutually adjust the shapes, spaces, colors, and textures they create. The album begins with the reflective “An Unexpected Visitor” by Melford and concludes with Goldberg’s romantic “Anymore,” which has faint echoes of the standard “I’ll Be Seeing You.” In between, the duo experiments with the levels of energy, density, speed, and abstraction, melding into unisons or tight harmonies, swirling in individual yet inseparable currents, and occasionally veering into the melodic freedom, abstraction, and fragmentation associated with such influences as Monk, Jaki Byard, Henry Threadgill, and Steve Lacy. The overall feeling is gentle and friendly, with bemused and affectionate curiosity carrying each tune through complex convolutions toward an elegant resolution.