My Visit With Jacob Heilbrunn and Wilson Audios Alexandria Speakers

For all the collegiality among TAS writers it’s rare that any of us have an opportunity to enjoy one another’s system if for no other reason than we’re just too spread out geographically. However when my wife and I came to Washington DC ostensibly to attend Jon Stewart’s  “Rally To Restore Sanity”, Jacob Heilbrunn and his family extended  to us an invitation to stay for a few days. This wasn’t the first time we’ve barged in on the generous Heilbrunn’s by the way–a couple years ago we also stayed at JH’s and at that time I heard the Wilson Maxx 3 which he later reviewed in TAS (Issue 194).

However there have been some big, and I mean–OMG–big changes since. JH recently purchased Wilson Audio Alexandria’s an acquisiton that afforded me a great opportunity to encounter these speakers under real world, rather than trade show conditions. They occupy a large space in Heilbrunn’s finished, acoustically treated basement–it measures roughly 22ft x 35ft with 8ft ceilings.  And it’s a good fit. In this space they can take advantage of the large acoustic volume to really spread their sonic wings and throw the kind of soundstage that would make many hobbyists green with envy. Me, for instance For the record, the full system consists of a Continuum Caliburn turntable with dual Cobra tonearms (Lyra Titan mono and Air Tight Supreme stereo cartridges), a Playback Designs MPS-5 CD/SACD player and alternatively the dCS Puccini player with U-Clock, a Messenger preamp, Ypsilon VPS-100 phono stage and Classé’s newest CA-M600 monoblock amps. Also Jena Labs cabling, and Isoclean Supreme power cords.  And dual Gotham subs! 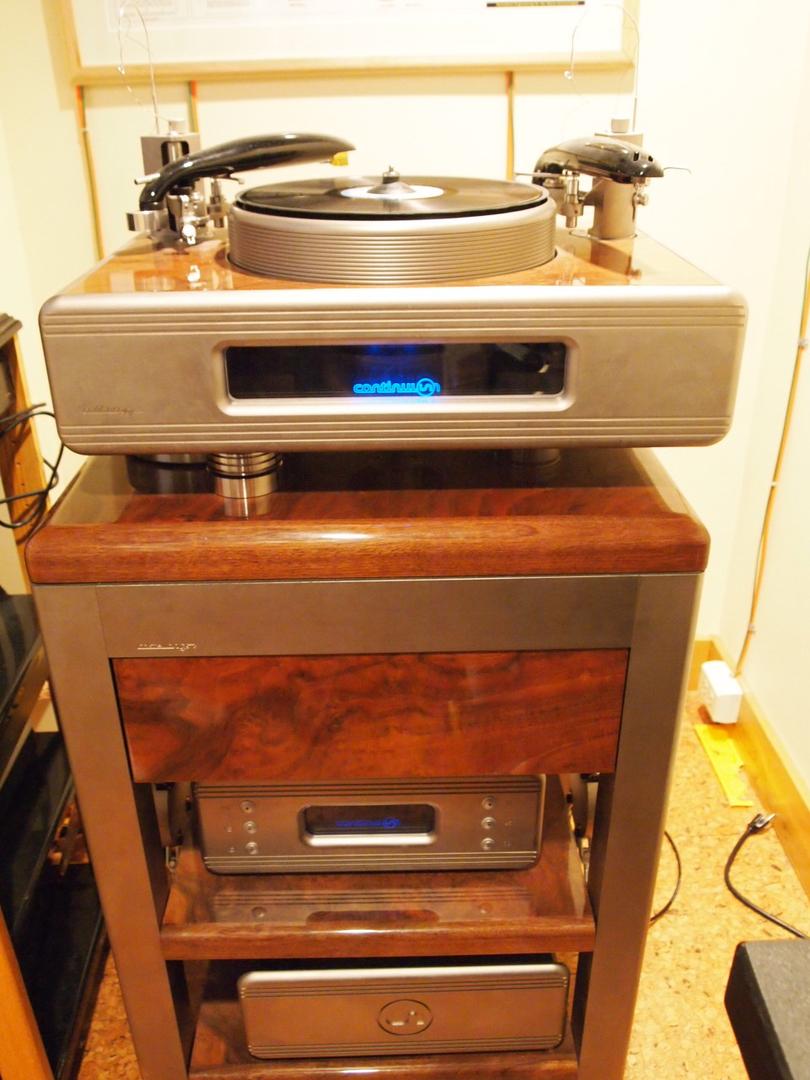 As many of you know my bailiwick is smaller loudspeakers positioned in a quasi-nearfield configuration and fit for the smaller room that I listen in. Big speakers in large environs usually take some getting used to­­–I immediately become cognizant of an entire bevy of acoustic interaction and coloration that my more proximate listening position largely but not entirely avoids. However JH’s system posed no problem getting oriented.  Within a few minutes I felt as familiar with his system as if it were my own (while I constantly reminded myself that it wasn’t). 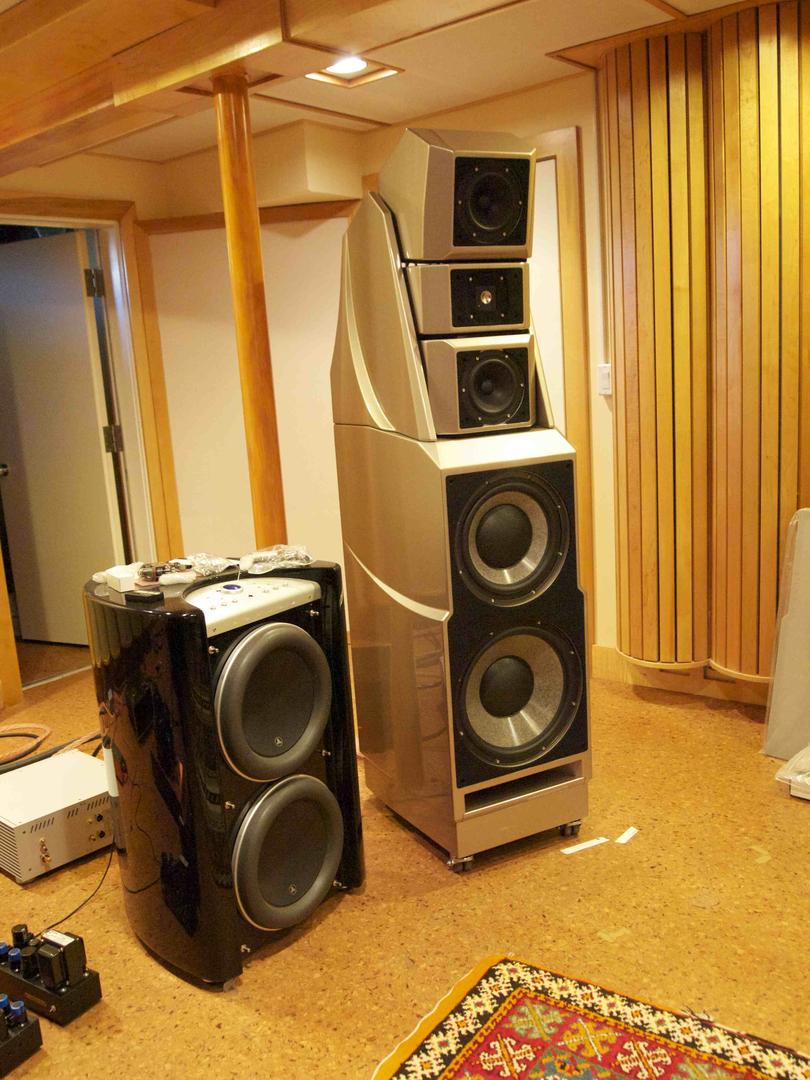 Of course the system sounds superb, why wouldn’t it? It’s reserves are massive and it achieves authentic orchestral levels and authentic scale that are anything but bombastic. Tonally it’s wonderfully balanced, virtually uncolored. In my nit-picking view it’s a warmer even more coherent speaker than the Maxx 3.  Referencing the discs I brought along, nothing ever veers out of joint. If the material doesn’t warrant a heavy hand, the Alexandria will sound positively delicate. In that sense it plays with extreme finesse and if required carpet-bombing-power. Yet perhaps the most interesting aspect of the Alexandria’s performance is not the sheer scale they can ascend to. That is to be expected of such a large speaker. Rather for me, it’s their ability to scale themselves up or down to any desired size in the room–even to play “small”, mini monitor size without sacrificing their essential character. Really. It’s a wonderful effect. Just spin the volume control up or down and the orchestra, band, jazz combo, what have you,  expands, or shrinks all in complete balance and consistent timbre–from the Bunyonesque to a pristine miniature.

In a manner of speaking it reacts to input like a massive, wide-angle, zoom lens that through the upward or downward tilt of volume allows the listener to push the stage and scale images back or move in unsparingly tight, blowing up images to enormous sizes. But whichever direction I chose, the resolution and transparency remained one and the same. It was always the same speaker. Frequency response remained linear at every volume I selected noting that acoustic bass, and other low percussion, baritone sax, trombone and strings were always in character.  It’s an odd effect because as I pulled volume way back I expected inner detail and micro dynamics to blur and recede but that simply was not the case.

I’m still distilling my impressions of JH’s system but the thought occurred to me just how dependant it is on source material. As highly resolved as it is, nothing is missed, including source material shortcomings and limitations–tape noise, microphone compression, recording studio ground loop hums, god knows what­. Fact is the better the system, the more good and the more not-so-good stuff is hanging out there for all to hear. Are systems at this level ( and even “lower” levels) better than the available software? Could be and I’m reminded of my interview with Doug Sax in TAS’ recent Analog Issue 205 where he remarks, “It’s pathetic that the best thing you can buy in 2010 is an LP–an artifact from the 1960s.” I heard some stellar recordings on this system but I still came away thinking that JH’s system was, more often than not too good for most recordings. And you know what? As Jacob popped on another recording, I couldn’t have cared less. 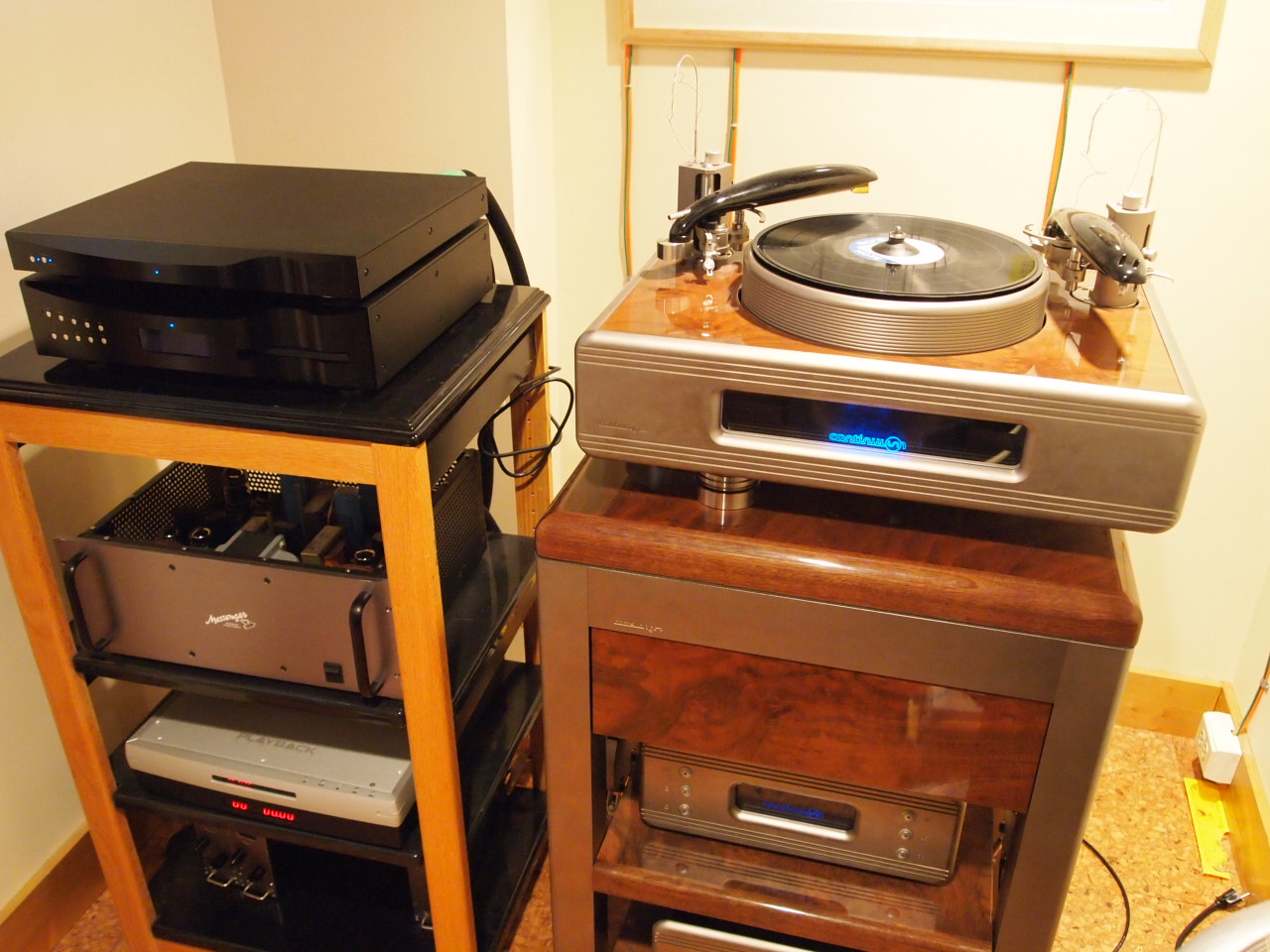 TAS at RMAF: Jonathan Valin on Loudspeakers Priced at $20,000 and Above

Best Speaker I’ve Heard? First Impressions of the Magico Q5 Loudspeakers in JV’s Listening Room + How Q5s Are Made