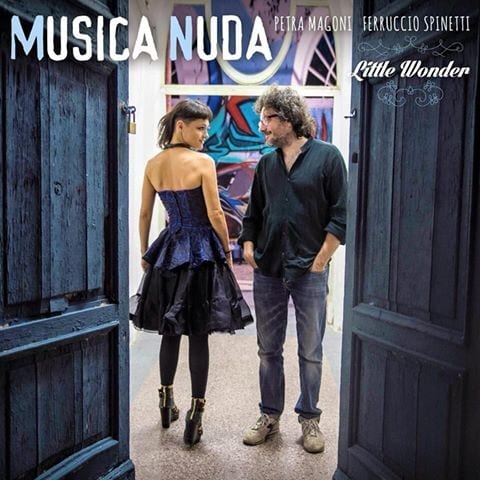 If duets pairing double bass and female jazz vocals have become more widely accepted since the days when Sheila Jordan struggled to find work with that lineup, that may be because more people have realized how lovely bass and voice can sound together. Helping the cause is Musica Nuda, whose eponymous 2004 debut album quickly found an audience; since then Petra Magoni (vocals) and Ferrucio Spinetti (bass) have been a steady concert draw. Their ninth album, Little Wonder, almost acts as a travel guide, visiting Jamaica (a nice reading of Bob Marley’s “Is This Love”) and the U.S. (the best redo of Bill Withers “Ain’t No Sunshine” I’ve heard in some time) before exploring Western and Eastern Europe and South America through material written and/or performed by Chico Buarque, Gianni Morandi, Edith Piaf, and others. As you may have guessed by now, Musica Nuda tend to take songs originally not in the jazz idiom and perform them in a jazz-inflected style. There’s never a sense of strain as they bounce from genre to genre, and Magoni’s sometimes playful vocals and Spinetti’s fluid bass lines receive the warm analog touch on Foné’s vinyl release.