The Munich 2014 High End Show featured more turntables on display than any other show I’ve attended this year—perhaps as many as I’ve see at all the major U.S. audio shows in 2014 combined! Companies like Pro-Ject, Thorens, Transrotor, Avid, Acoustic Signature, and more displayed their entire lines of turntables, making for a mouth-watering analog extravaganza. Because Clearaudio did not exhibit its full line of turntables this year (I’m told Clearaudio only attends the Munich Show every other year) there may have been slightly fewer turntables this year than last, but I believe several newcomers, as well as established manufacturers, more than made up the difference. In any event, Clearaudio was still well represented in several rooms throughout the show.

Many of the best-sounding demos featured wonderful turntable systems as their front ends. Of particular note were a couple of ’tables derived from reference models from AMG, Brinkmann, and Kronos; a new, limited-edition, flagship cartridge from Ortofon; a revamped product line from Pro-Ject; and a couple of phonostages with unique attributes at their respective price points from AMG and Pro-Ject, as well as several reference tonearms. 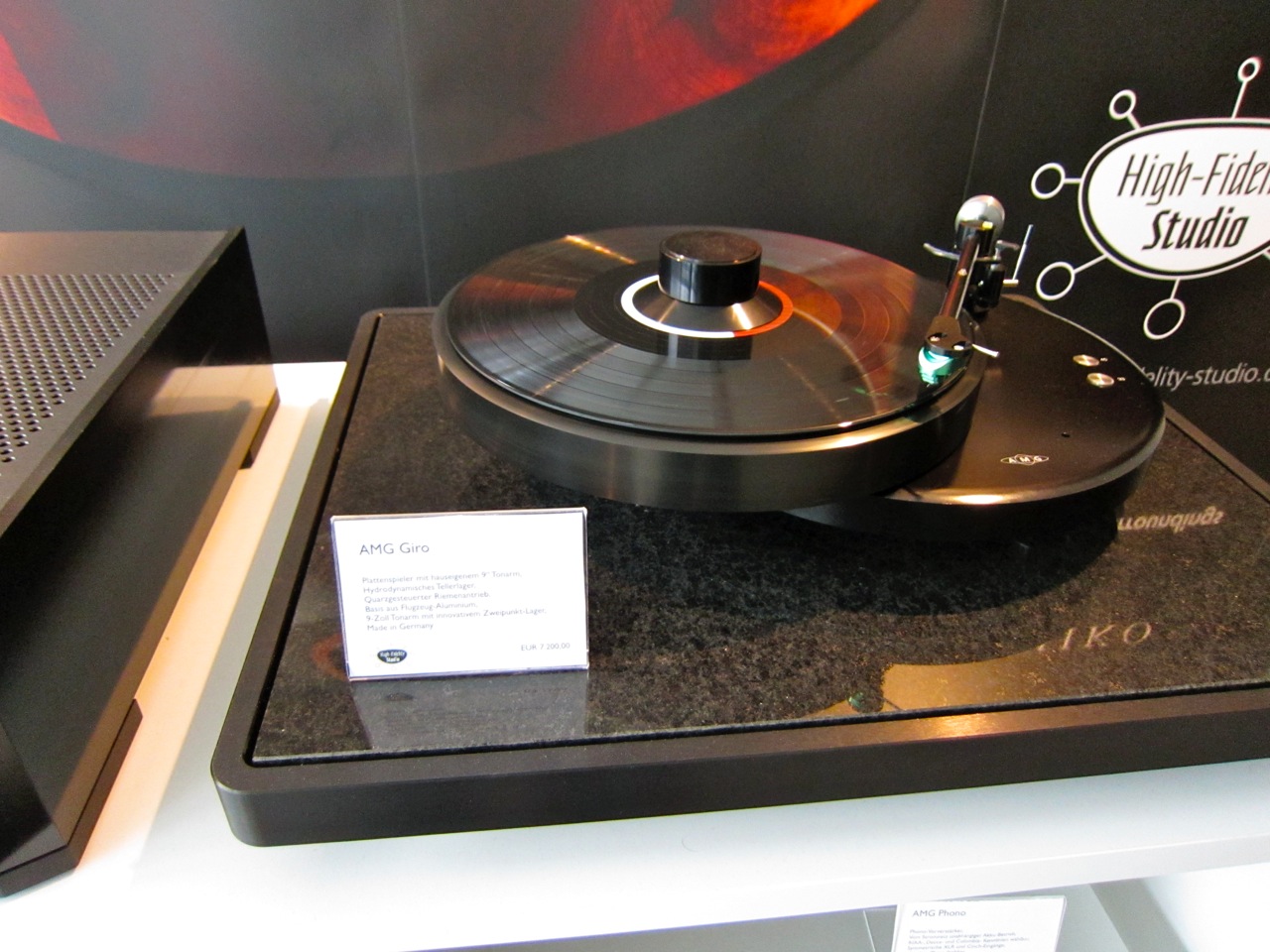 For those of us who heretofore could only dream of an exquisite turntable from Analog Manufaktur Germany (AMG), like the Viella 12 turntable and tonearm, there’s good news! AMG introduced the Giro, a smaller and less costly ’table ($9900 in U.S.) with electronic speed control and a decoupled spindle-design and platter-bearing derived from the Viella, as well as a 9″ tonearm ($3500) employing a scaled-down version of the patented dual-pivot bearing found in AMG’s reference 12J2 arm. The Giro’s belt-driven platter is made of aluminum and synthetic materials. The AMG Teatro MC phono cartridge ($2000) with a special titanium body, which was shown at Axpona a few weeks ago, was also on display.

Not to be missed was the AMG Phono Preamplifier ($5000), designed by Michael Yee. This two-chassis, dual-mono, solid-state, battery-powered phonostage has both single-ended RCA and balanced XLR inputs and outputs. Its front panel enables push-button selection of different phono equalization curves, including RIAA, Decca, Columbia, and mono. Using the right EQ can have a dramatic effect on sound quality, transforming a bright or lackluster LP into a treasure. The AMG Phono Pre is scheduled for delivery in the third quarter of 2014.

In a system with the Audio Physic Cardeas Plus speakers driven by Aesthetix electronics, the sound was immediate and transparent with a very quiet background. 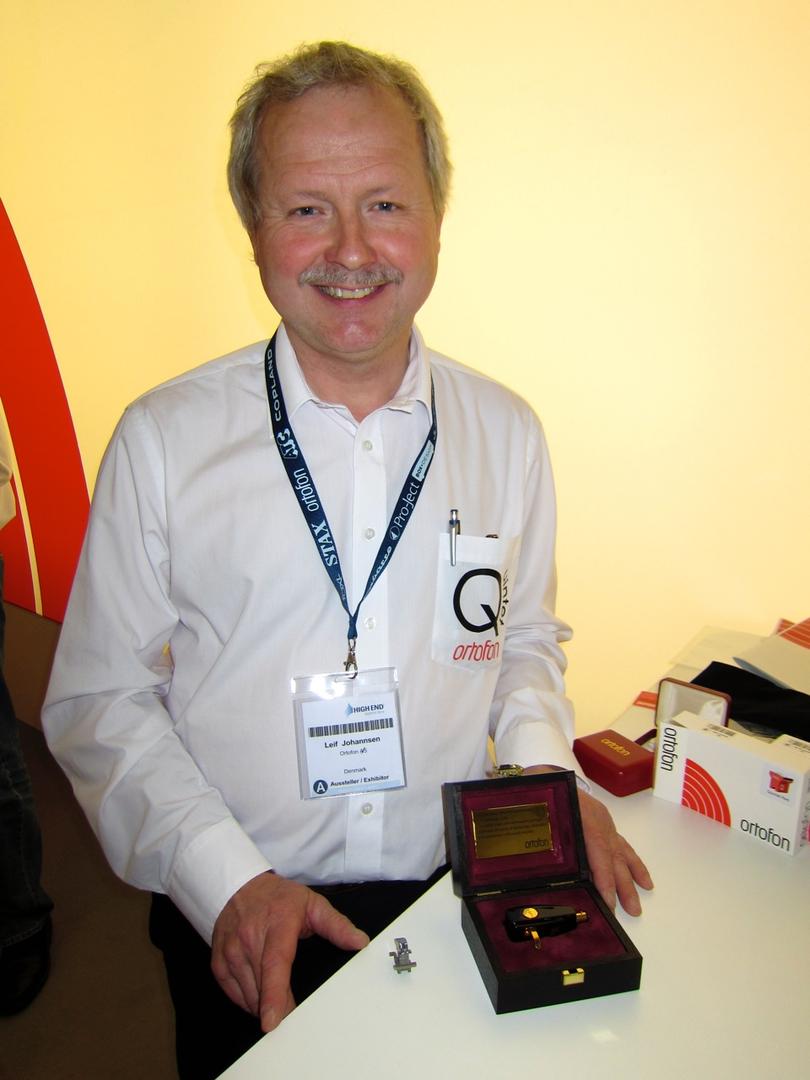 The SPU A95 is a new, limited-edition, reference moving coil cartridge celebrating Ortofon’s 95 years of analog innovation. According to designer Leif Johannsen, Ortofon uses its Selective Laser Melting process to create a single-piece body with very high internal damping and overall rigidity, reducing spurious resonances in the cartridge via the application of layers of titanium. The SPU A95 employs other Ortofon-patented technologies like FSE, which ensures a highly stable force field within the cartridge regardless of the movement of the armature, minimizing dynamic and intermodulation distortion while enhancing dynamics, clarity, and soundstaging. Output voltage is a modest, but quite useable, 0.3mV, and the price is still “TBD.” Only 500 units will be produced and if history is any guide, they are likely to be snapped up quickly. 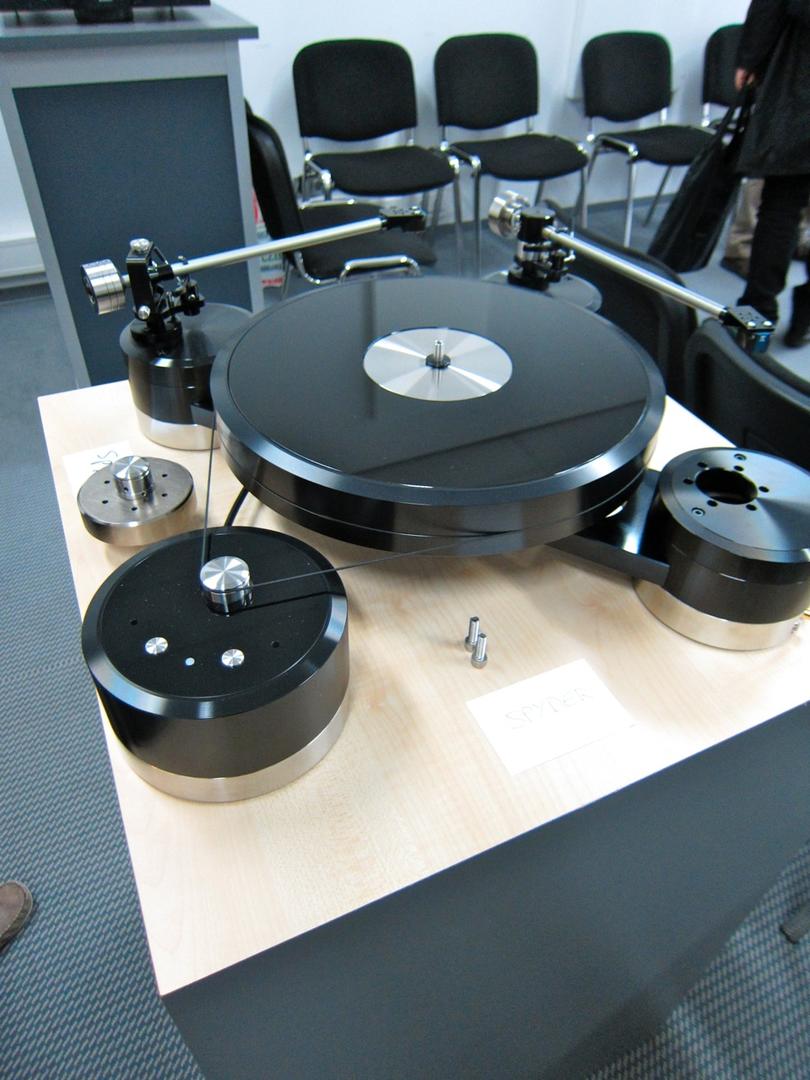 Brinkmann’s new belt-drive Spyder turntable (~$12k) is derived, in part, from its Bardo and Balance turntables, but it also sports some unique design elements of its own. The Spyder uses the Balance’s 12-pole motor, as well as the hydrostatic bearing used in all Brinkmann ‘tables; its minimal-plinth design and aluminum-alloy/crystal-glass platter is similar to the Bardo’s. One unique aspect of the Spyder is that it can be configured with as many as four tonearm towers!

An analog front-end comprising the Spyder, Brinkmann 12″ tonearm (the 12.1), and EMT-ti cartridge in combination with all Brinkmann electronics (Edison phonostage, Marconi preamplifier, and Mono amplifiers) and Vandersteen Model 7 loudspeakers, produced very natural sound, with tight, well-controlled bass—a real feat in the rooms at the MOC! It was among the best sounds at the show. 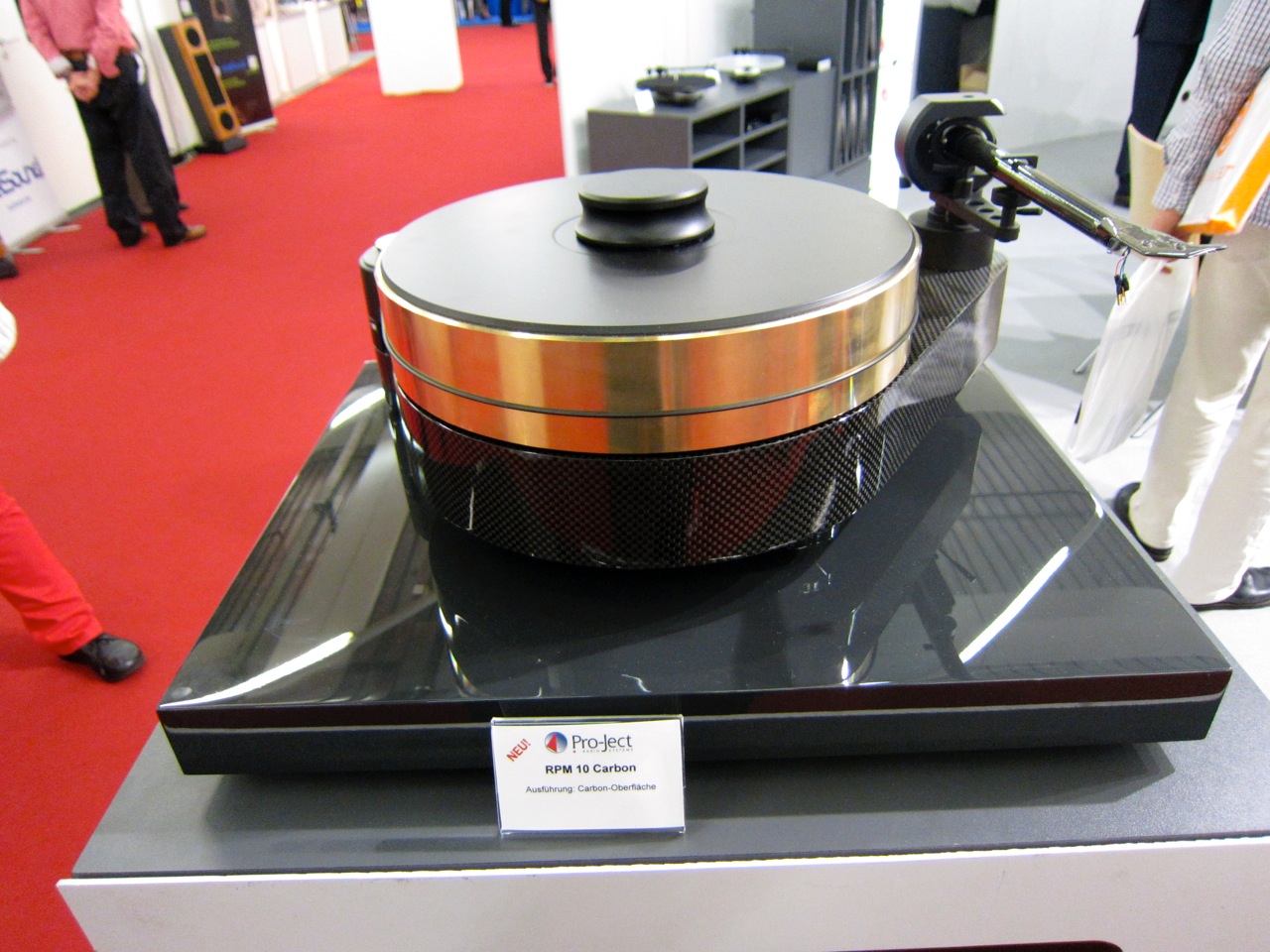 Perhaps no other company in Munich introduced more new (or upgraded) products than Pro-Ject. The company upgraded its entire line of RPM turntables from the entry-level RPM 1 to its top-of-the-line RPM10, and either introduced or upgraded a host of other products, from turntables to phonostages to all-in-one integrateds.

Having reviewed both the RPM9 and RPM10 turntable systems, it was interesting to hear Pro-Ject’s Heinz Lichtenegger talk about the upgrades to both that are due on these shores in a few months. The most evident are better ’arms for both. The RPM9 sports a top-of-the-line Evolution 9CC tonearm whereas the RPM10 includes a 10″ Evolution 10CC tonearm. Each ’table includes an upgraded plinth with a new sandwich construction of MDF, carbon fiber, and steel pellets, along with a new aluminum (or optional brass) platter, a new inverted bearing, new DC power supplies, and bigger magnets to keep the platter floating, among other enhancements. 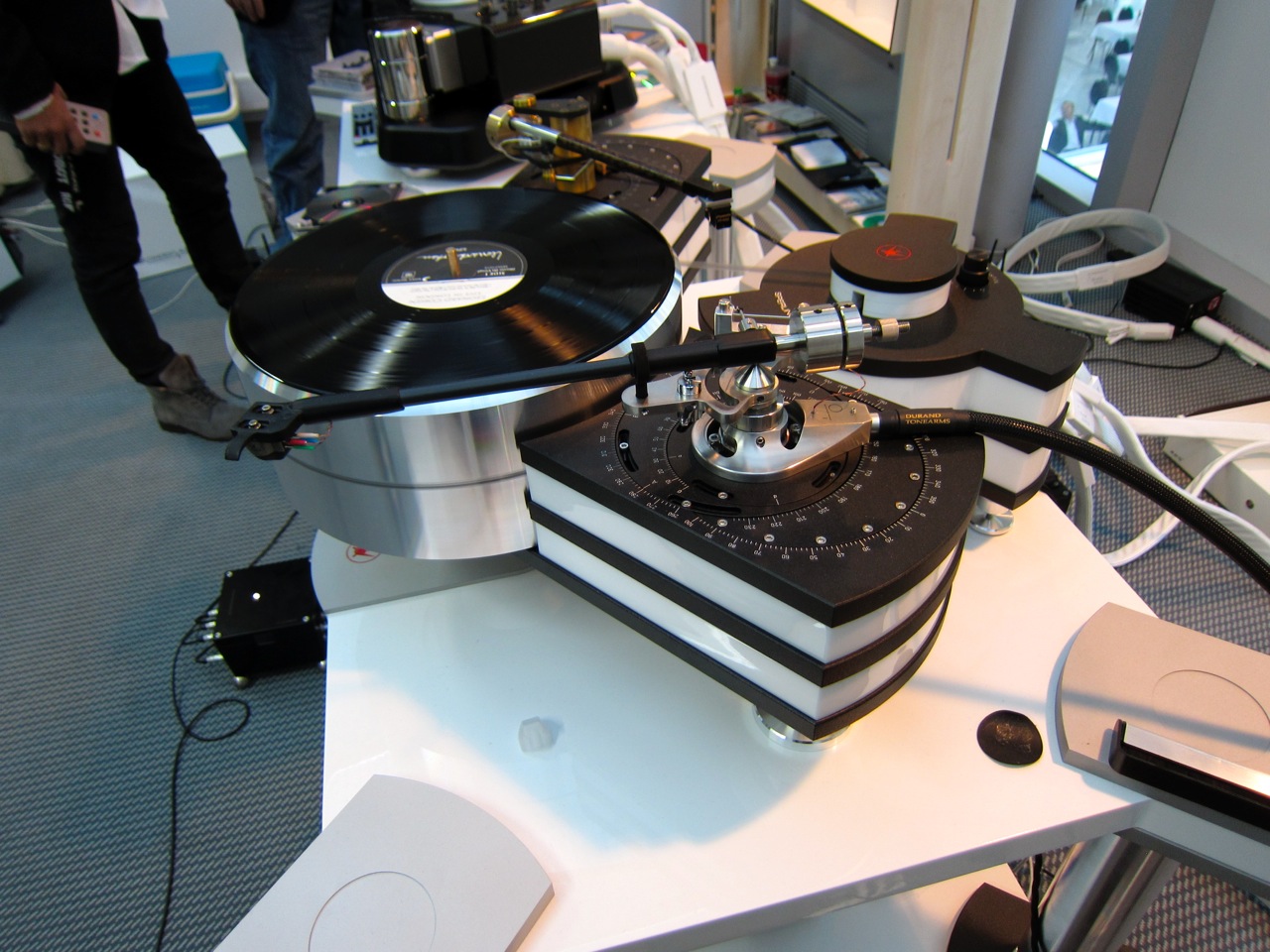 While introduced at the Munich Show last year, the Sperling L-1 turntable (~$34k) was producing some of the best sounds of the show, in a system with Zellaton Reference speakers, an Analog Domain Isis integrated, and an Allnic H-3000 phonostage, along with Durand and Schroeder Reference tonearms with Ortofon MC Anna and Phase Nation cartridges. Its base, available with optional inlays of either wood, acrylic, or POM, is a massive aluminum support structure that allows two tonearm bases to be mounted on it. Users can select the type of inlay material based on their own tonal and visual preferences. The L-1’s innovative new motor housing allows the user to change belt tension while spinning its aluminum platter, and the arm-mounting system is compatible with any length tonearm. This turntable is hand-made in Germany and looks “formidable.” The naturalness and transparency of this system was perhaps the best at the show, and the Sperling L-1 contributed mightily to this effect. 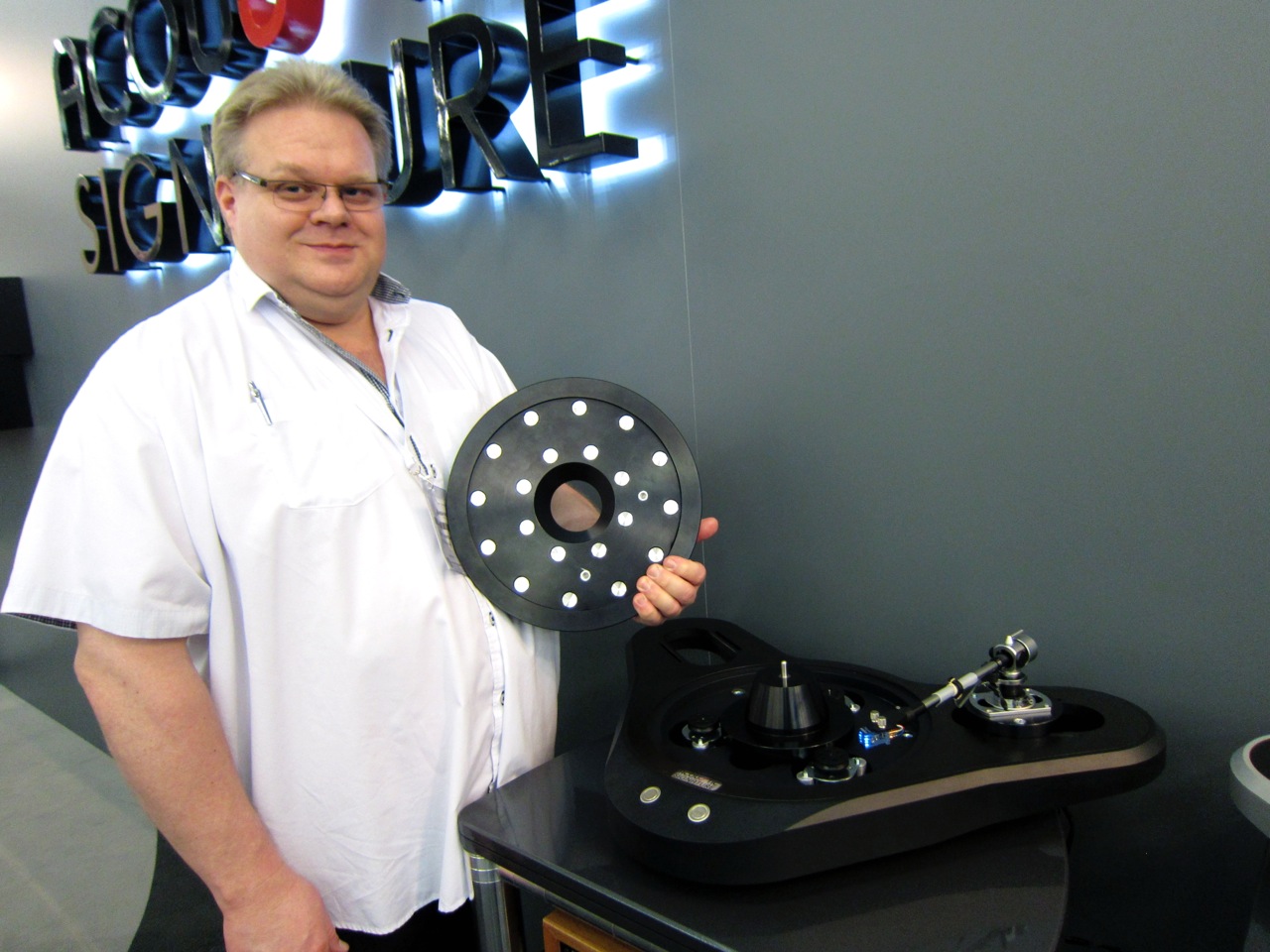 Acoustic Signature introduced its Novum turntable (€16,499), which takes up to two arms (including 12″ models), and uses three synchronous motors. The digital motor electronics are housed in an external box and are completely independent of the mains. It also includes a new Silencer 2 platter, which uses 20 silencers to reduce platter ringing and vibration by a reported 80dB. The company also introduced three new TA-1000 tonearms in 9″, 10″, and 12″ lengths, starting at €1000, along with its reference TA9000 (€15,000 to €17,000) tonearm with hundreds of “bonding units” in its rigid armtube. 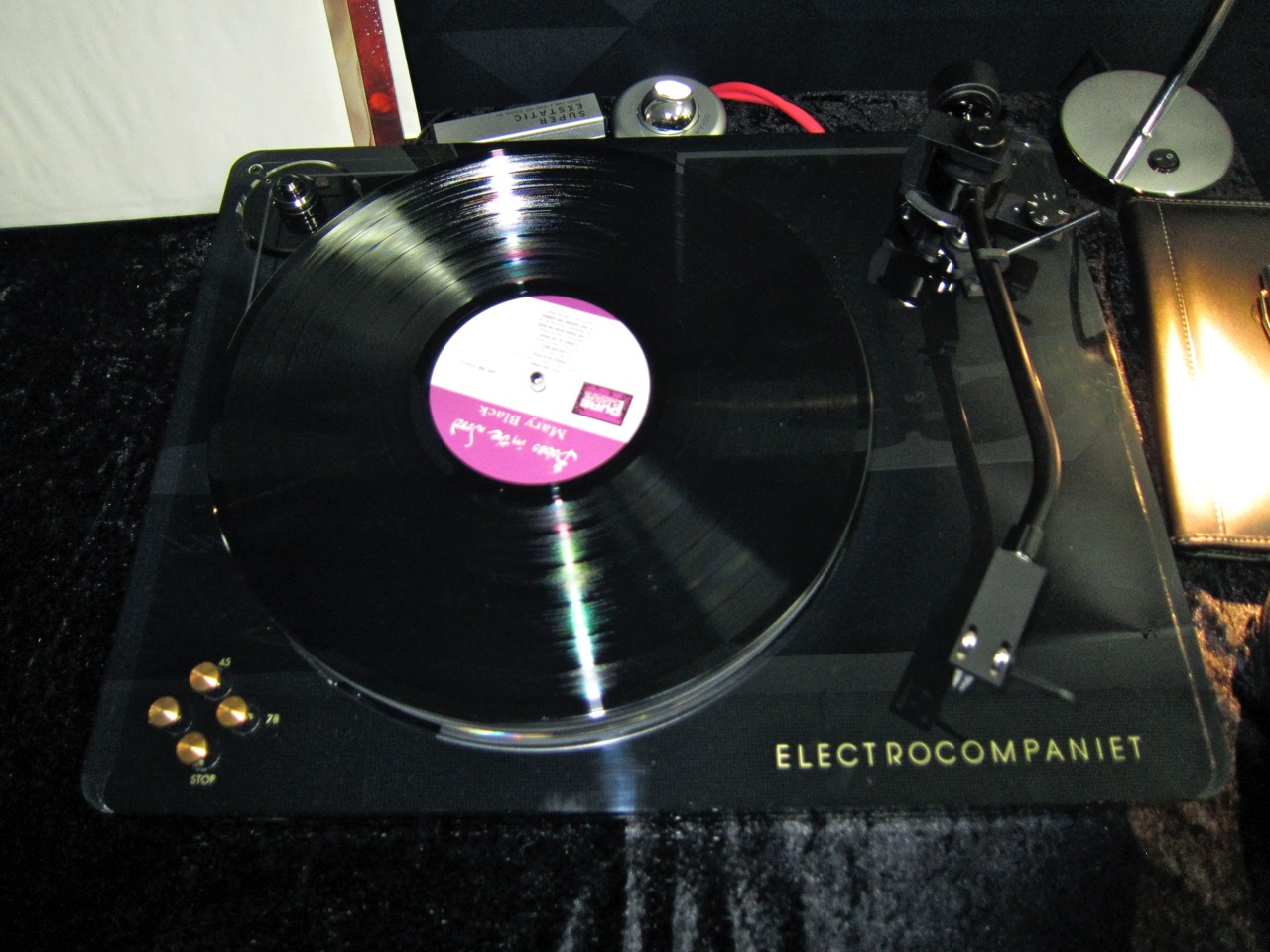 Electrocompaniet introduced a “plug ‘n play” belt-drive turntable, the ECG1, with a unique servo-control system using a small amplifier that reportedly ensures absolute speed control. It also employs an inverted bearing and a 30mm platter made of layers of acrylic and aluminum laminated together. The turntable system ($4995) includes a tonearm (sourced from Jelco) and a Soundsmith high-output, moving-iron cartridge made especially for Electrocompaniet. Along with its ECP2 fully balanced phono preamplifier ($2350), as well as its electronics and speakers, Electrocompaniet can offer a complete analog-based system, as well as a digital one. 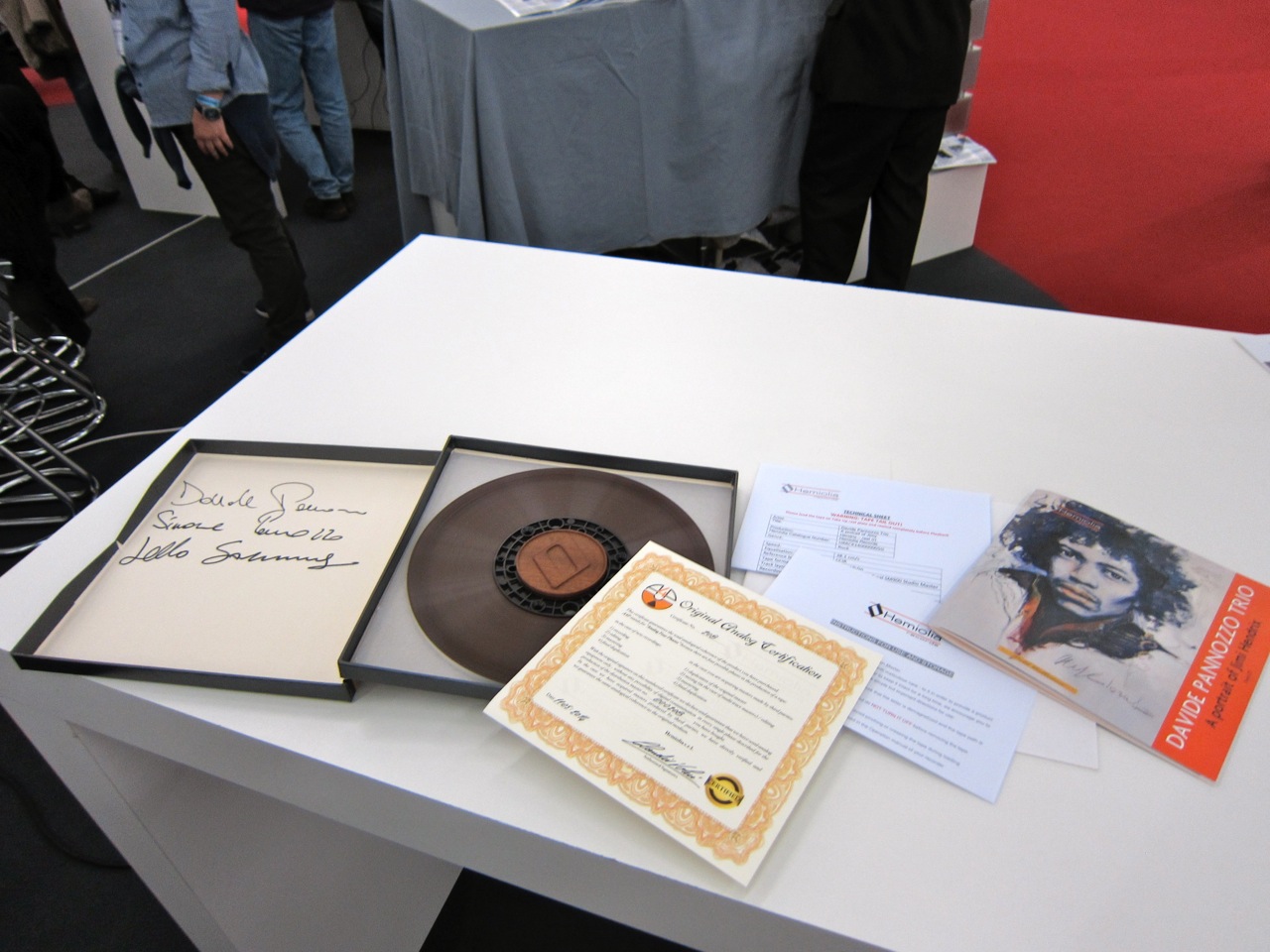 While analog playback predominated in Munich, it was primarily from turntable systems. I did not see as many reel-to-reel front-ends as I have in shows in North America. However, I discovered a new source of high-quality prerecorded tapes! Hemiolia Records, the brainchild of Claudio Valeri and Giorgio Foschi, has a line of analog mastertapes of original recordings. They are painstakingly reproduced with “total analog coherence” from stem-to-stern. From what I heard in Munich, these tapes are really quite good. For more information, go to: www.hemioliarecords.com. 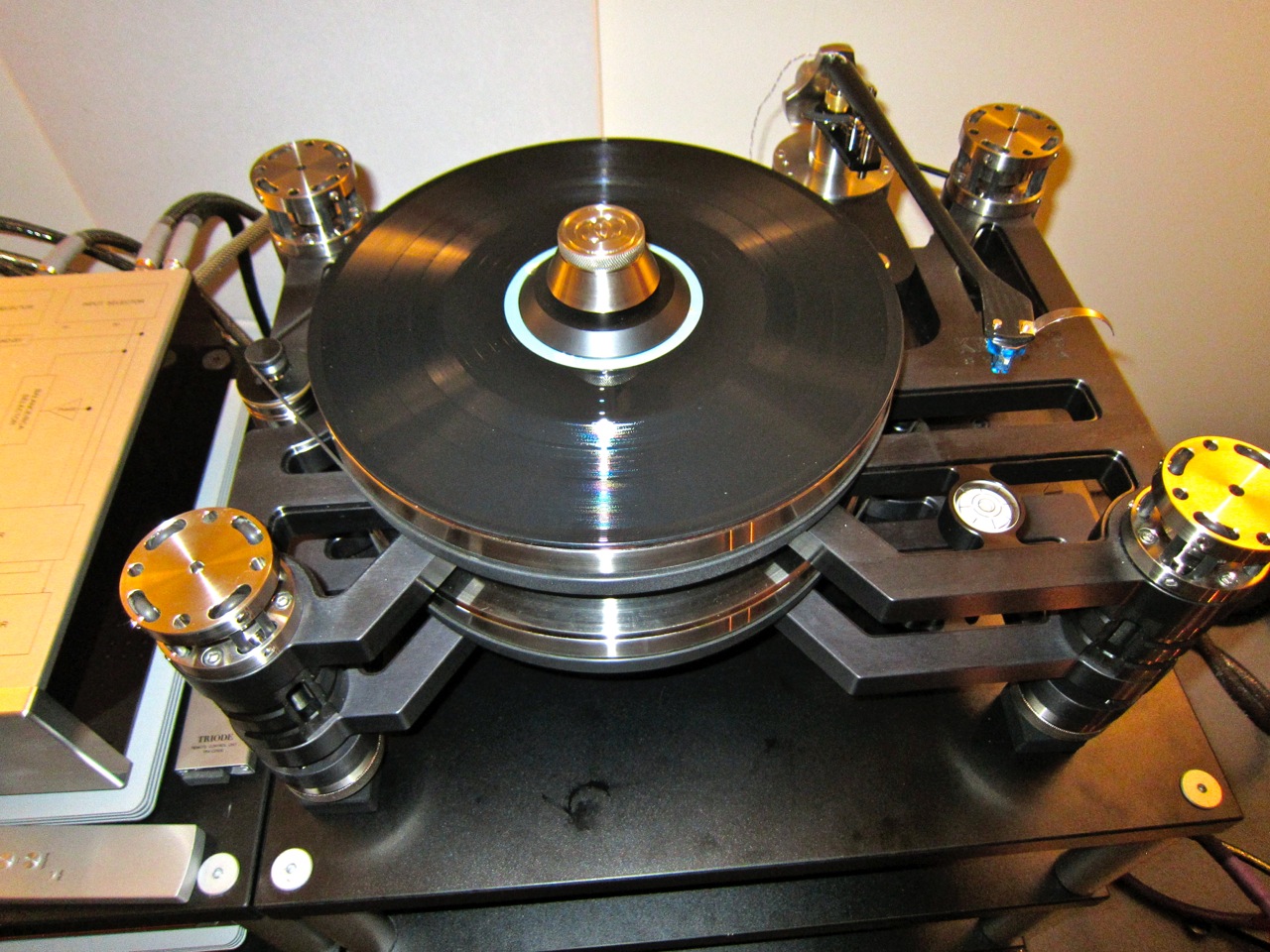 The Kronos Sparta turntable is a more affordable alternative ($21.5k) to Kronos’ reference turntable (simply called the Kronos) and uses the same bearings, motor, and suspension as its more costly sibling. Like the original, the Sparta uses two counter-rotating platters to reduce platter vibration. However, according to designer Louis Desjardins, the Sparta employs a simpler control system, and its second platter shares the same voltage as the first. In an illuminating demo, with the second platter turned on, there was more detail throughout the frequency spectrum, particularly in the highs and the bass. With the second platter off, the soundstage was not as broad or defined; there was less fine detail, and the system sounded less dynamic. 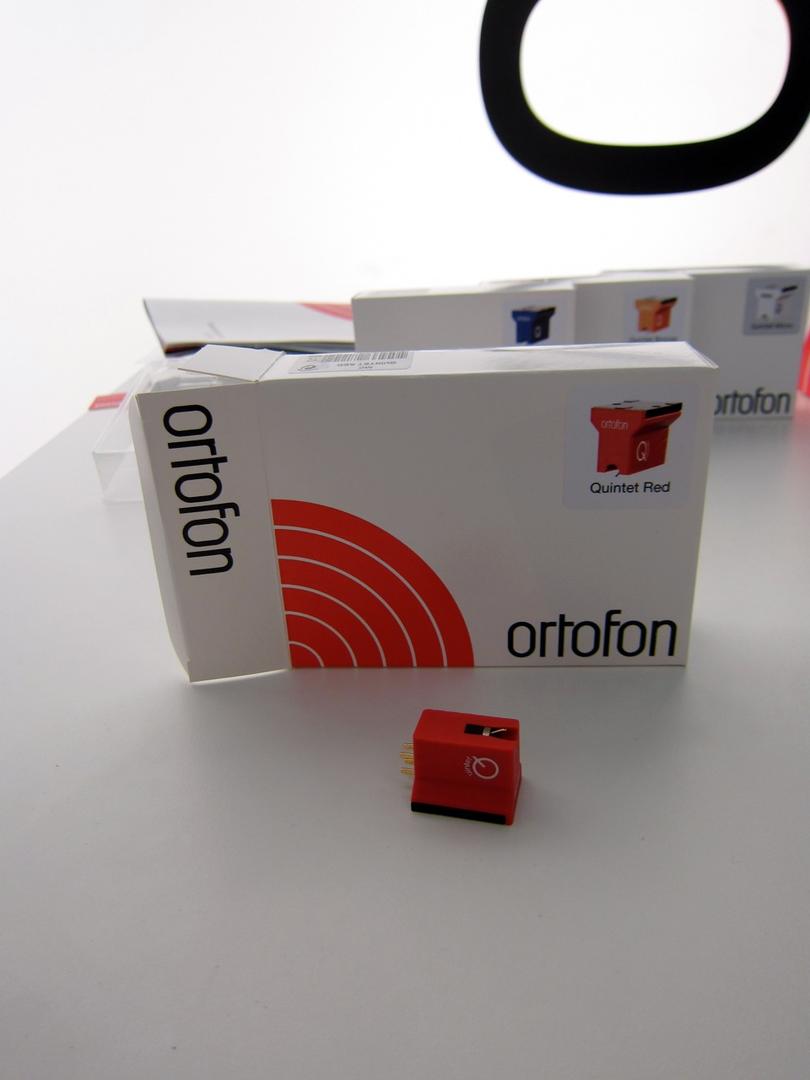 At the other end of the price scale from its flagship SPU A95, Ortofon’s MC Quintet Series is an entry-level moving-coil line of five cartridges that gives audio enthusiasts a much better chance of doing a good cartridge setup themselves. It includes the Quintet Mono (€400), which is an inexpensive way to get more out of your mono recordings, as well as four “modestly priced” stereo MCs: the all-purpose Quintet Red (€250), Blue (€400), Bronze (€600), and the top-of-the-series Black (€800) which uses a nude Shibata diamond stylus. As one moves up the line, the cartridges produce more resolution, detail, openness, and/or dynamics.

Absolare was demonstrating its leather version of Steve Dobbins’ Kodo The Beat ’table (€25,000 Euros) with a Schroeder tonearm and Lyra Atlas cartridge along with a tasty Allnic H-3000 phonostage (€11,000) going into Absolare’s gorgeous-looking (and sounding) electronics.

Avid was showcasing its Acutus SP Reference with an SME V tonearm, along with its full line of turntables starting with the Avid Ingenium.

Pro-ject introduced a new battery power supply for its fully-balanced Reference phonostage, while Soundsmith was showing its new strain gauge as well as a new line of moving-magnet cartridges.

Tri-Planar continues to improve on the original design and execution of its tonearm—it is far more refined than the original Wheaton Tri-Planar I owned several decades ago. The company not only introduced an SE version of its 10″ tonearm ($7500) with a coax-damped carbon-fiber armtube, but its new 12″ tonearm ($9800) is now shipping. Tri-Planar’s designer Tri Mai says the new ’arms are able to extract more ambient information.

Most Significant Trend
Turntables and vinyl were everywhere, as well as more horn-based systems than you’re likely to see anywhere, except possibly Asia.

Most Coveted Products
The Acoustical Systems Axiom tonearm ($22,500) enables SRA and VTA to be set on the fly and uses carbon fiber and titanium layers in the armtube separate by a liquid layer. Fortunately, its detachable headshell is available separately and can be used to upgrade a variety of tonearms.

Two products I can’t seem to get out of my mind were the stunning Estelon Extreme speakers with their height-adjustable high/midrange modules (to help deal with reflections), and Crystal Cable’s diminutive, stand-mounted Arabesque “Minissimo” speakers which produced surprisingly satisfying, natural, and immediate sound.