Morrow Audio is a relative newcomer to the high-end cable segment. Founded in 2006 and based in Independence, Kentucky, the company currently manufactures both a pro line as well as a comprehensive consumer line that includes power cords and an expanding assortment of headphone cables. Morrow’s interconnects and speaker cables are divided into seven levels not including the Elite Grand Reference Series, which, as the name implies is in a class of its own. Common to all Morrow cabling is a three-pronged design philosophy that it describes as SSI Technology—an acronym for solid-core, small-gauge, individually insulated. Key to Morrow’s SSI configuration is the excellent RFI- and noise-rejection characteristics that its technologies are said to bring to the table.

My review samples included two levels of interconnects, the MA4, the MA7, and the marque’s penultimate speaker cable, the SP7. The MA4 consists of 24 runs of insulated silver/copper conductors and is thin, very lightweight, and manageable. The MA7 ups the ante with 72 runs with its stiffness increasing only slightly. The SP7 speaker wire consists of a whopping 120 runs. For insulation Morrow uses PVDF, a plastic material of the fluoropolymer family. The wires are finished with nylon jacketing and silver-soldered to a choice of terminations. The cables have an attractive, nondescript appearance and are refreshingly light and pliable. Whereas some cables approach the rigidity of conduit pipes, Morrow makes it a breeze to angle its offerings around equipment or furnishings. 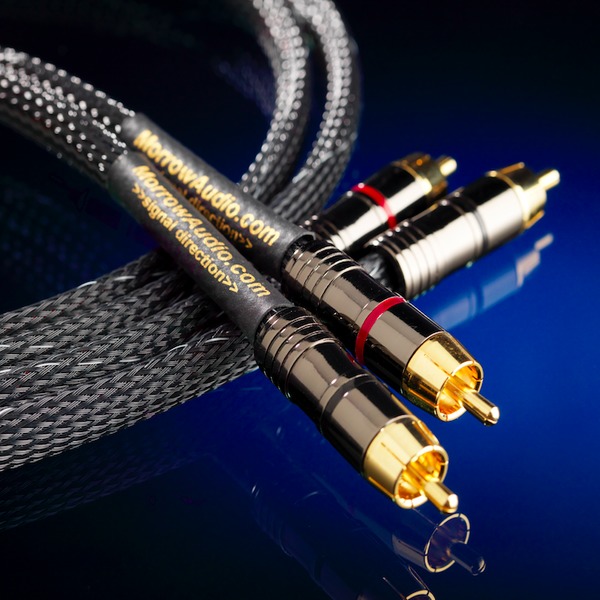 Morrow Audio might be the new kid on the block, but its wire performed like an old pro. The entry-level MA4 was nicely weighted with a firmly centered midrange sweetspot that focused images with clarity and conviction. In all-out extension, MA4 is a hint subtractive in that it couldn’t fully capture the air and ease of the fancier MA7 interconnects. For example, when it was tasked with reproducing the complexities of orchestra and chorus during Beethoven’s Ninth [Chicago, Solti, Decca], the imaging of each section grew a little less distinct, the dimensional outlines of the hall a bit imprecise. The sound also wasn’t quite as dynamically charged, exhibiting hints of compression on the gut-churning opening kickdrum of The Police’s “Murder By Numbers.”

However, the MA4 is particularly well suited to the entry-level world in that it possesses a darker, more forgiving character that soothes and slightly softens treble anomalies rather than resolving every last harmonic detail. This makes it an ideal palliative for systems that already have some attenuation in the lower frequencies and might also have a bit of a treble kick that tends to bleach orchestral string and brass harmonics. At this juncture, I always return to the all-important issues of perspective and system-matching. As well positioned as the MA4 is in its entry- to mid-level niche, it would be overmatched in the company of ultra-high-performance electronics driving resolution monsters like the Vandersteen Treo CT (review forthcoming) or the Wilson Audio Sabrina (Issue 256). Naturally that’s why Morrow Audio offers Level 7. 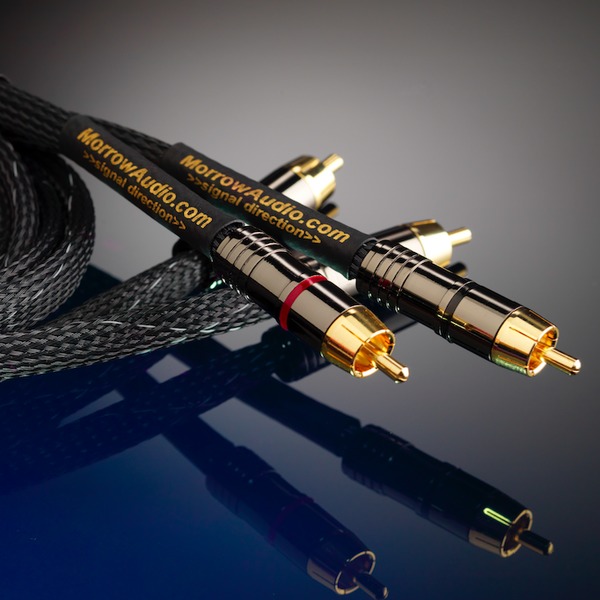 If the MA4 proved to be a great warm-up act, the combination of MA7/SP7 was a very satisfying main event. Compared with the MA4, the darker overall character was lifted. And while the MA4 was midrange centered, the pricier MA7 spiced up harmonics and offered more than a bit juicier textures. It fully restored the delicacy and dynamic throw-down of pianist Ivo Pogorelich’s performance during the Mozart Piano Sonata in A Major [DG]. Though a little cooler overall than its budget sibling, the MA7/SP7 wire was by no means bright or edgy. The sibilance range was nicely controlled and conveyed naturally occurring energy rather than a hard sizzle. Also on hand were very good low-level resolving power and solid bass responsiveness. During Nickel Creek’s “Sabra Girl,” I admired how the MA7/SP7 captured the delicate, acrobatic character and transient speed of Chris Thile’s mandolin, and the ripe resonance of the acoustic flat-top accompaniment, and fiddle player Sara Watkins’ touching vocal on This Side [Sugar Hill]. In soundstage and dimensionality, the Level 7 combination came up a little short of reference level in conveying the vast spread and dimensional depth that top-tier cables such as the much more expensive Kimber Select KS and Synergistic Atmosphere offer. During Norah Jones’ “The Nearness of You,” her piano didn’t fully inhabit the soundspace and decay into the resonant hall. And micro-dynamic differences were not as distinguishable. In comparison, my reference wire placed Pieter Wispelwey’s cello precisely within a pocket of the orchestra, while the Morrow was a little more tentative in committing to this unambiguous, locked-down position [Bruch, Channel Classics]. However, in terms of the absolute sound—acoustic music recorded live in a hall—on balance, the Morrow wire bore most of the hallmarks of the very best cables, particularly in the areas of dynamics, tonality, resolving power, and harmonic nuance. It possessed a general ease and lack of artifice when reproducing complex groupings of musicians on the symphonic stage.

Setting performance aside for a moment, Morrow Audio is also making an aggressive play on the marketing side of the equation. For example, all Morrow Audio wire comes with a lifetime guarantee. Morrow also offers bundle packages, an “easy pay program” option, a break-in service option, and a 60-day return. That’s what I call confidence. Morrow is even shaking things up in the more freewheeling headphone market with innovative ideas such as color selections for some headphone cable models.

By any standard, Morrow Audio is an up-and-comer. Its products may not be head-turners to look at, but in the high end performance is where the rubber meets the road, and perform Morrow’s cables do. Going forward I expect its offerings will challenge many of the more highly regarded notables. An impressive debut.

A Mesmerizing Event at JS Audio