When you acquire something brand-new, whether it’s a car or a fine pair of shoes, break-in time is often part of the deal before the real performance and enjoyment of the product begin. Of course, break-in is also part and parcel of audio gear, and the latest cables from Morrow Audio require, shall we say, a more protracted time frame than most. But as the hackneyed phrase goes, good things come to those who wait—in this case compellingly detailed sound and remarkably natural-sounding instrumentals and vocals.

The review samples I received—loudspeaker cables and interconnects from Morrow Audio’s 3 and 6 series (mid and upper-tier offerings in an ascending lineup of 1 through 7, plus Elite and Anniversary editions)—came with a couple of printed pages of helpful information about the cables, including the break-in time required and what could be expected at different points in the process. Thankfully, Morrow offers a break-in service for its wires for fees that vary according to the number of days of break-in you choose. I did take advantage of a few days’ worth of Morrow break-in time, but logged many more hours—to the tune of over two hundred—on my own, before beginning critical listening. (Morrow Audio founder and designer Mike Morrow discusses more about this and his design approach in the sidebar interview.) The fourteen-year-old company hand-builds its cables for home audio and pro audio, sells them directly (fewer markups), and now has customers in more than 70 countries. Morrow also offers a trade-up program for its own or other brands’ cables.

But what’s really noteworthy about Morrow’s cables is the high value they represent. The 6 and 3 series exceeded my expectations across many criteria for this price category (and beyond), particularly in their low noise floor, RFI rejection, ability to reveal subtle musical details while maintaining natural timbres—especially on acoustic instruments and percussion—and minimal sonic “tampering,” additions, or colorations. 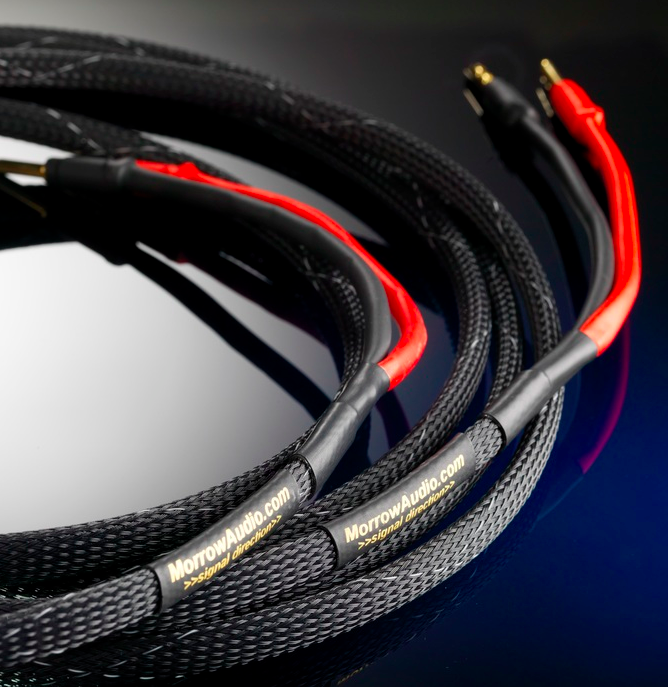 Indeed, Morrow’s approach to cable design focuses on creating the lowest-distortion cables possible, and it all started with Mike’s own setup and his 30 years of electronics repair and audiophile experience. “After a lifetime of personal experimentation I rested on the formula of small-gauge, solid-core wire, and individually insulated strands.” All his cables now contain this “SSI Technology” and use solid copper for the conductor material. Without taking too deep a technical dive, here’s a brief summary: To minimize “skin effect”—the tendency of different frequencies to take separate paths along a wire’s depth, resulting in time and phase errors and distortion—only small-gauge wire is used (in a special Litz construction). Also, Morrow only uses solid-core wire (as opposed to stranded configurations) to provide a more solid continuum for the signal to flow through, ensuring better signal integrity and a higher degree of detail. Some of Morrow’s cables do contain multiple mono strands, but these are individually insulated and bound together with cotton weaving, which in turn is covered by nylon mesh. This is the first time I’ve seen cotton used as a dielectric material in audio cables for a hi-fi system. Why cotton instead of Teflon or other synthetics? Mike explained that he found it to be the best and least reflective dielectric next to open air. As you’d expect, this means the cables are extremely lightweight in comparison with other wires in this price category (and above it), in addition to being very pliable, flexible, and easy to handle. Their design also helps lower the noise floor and reject RFI.

Morrow provided me with a generous array of SP6 and SP3 loudspeaker cables and MA6 and MA3 interconnects for this review. I’ll focus primarily on the mid-to-upper-line 6 series, as these were more commensurate in price and quality with the components in my current setup, but I’ll mention some comparisons with the less expensive 3 series wires, too. (The SP3 cables are only recommended for systems up to 120 watts.)

The system through which I did the majority of my critical listening included KEF R11 speakers connected with Morrow SP6 speaker cables (banana terminations) to the PS Audio Sprout100 integrated amp (with DAC) connected with Morrow MA6 RCA interconnects to the MBL Noble line N31 CD player/DAC. I also did some streaming via Tidal and Qobuz directly through the Sprout by tethering a USB cable to a MacBook Pro and MacBook Air.

As noted, the Morrow wires are very pliable, which made switching cables and gear around a breeze. Though the cables lack bulk and heft, evident care was put into their hand-built construction. They aren’t flashy but look attractive enough, clad in black-nylon woven-mesh outer layers and sporting black and red rubber covers (to indicate hot and ground) on the 8-inch “legs” leading up to the terminations. However, the 6 and 3 series wires appear identical, so differentiating them involves eyeballing the small black Morrow-branded label wrapped around each; these labels also serve as signal-direction indicators, with the label end toward the source for interconnects or the loudspeaker for speaker cables. Their sonic quality and pricing varies by the respective number of SSI wire runs inside—and naturally also by the cable length selected. The SP3 and SP6 cables contain 144 and 576 wires in a special Litz construction; the MA3 and MA6 interconnects have 24 and 96 wires, respectively. The more wire runs deployed, the higher the resolution.

The latter stages of my break-in involved traversing a brief period of “two steps forward, one step back” when it came to sonic improvements. However, after adequate time, the speaker cables and interconnects (the SP6 and MA6 in particular) settled into smooth sailing. Bass extended as it should have; slight traces of graininess or glare in the highs dissipated; backgrounds stayed very dark and quiet; soundstaging opened up; and details that had been obscured shone through with greater clarity, resulting in greater musical realism. On Andrew Bird’s Are You Serious album streamed via Tidal (Master MQA) on one laptop and Qobuz (Hi-Res) on another, the harmonics of strummed acoustic guitar strings sounded increasingly natural over time on tracks like “Puma,” where the leading edges of upright bass became more and more precise and easier to follow, and the transient attacks on Bird’s violin pizzicatos came through more and more cleanly and sharply, as if he were right there, plucking away. Ditto the presence of his expert whistling, pure and clear on “Saints Preservus.”

Percussion displayed an evenhandedness and sense of effortless continuity, from pristine tambourine attacks to the long, long decays on the chimes in “Left-Handed Kisses.” The title track’s rhythmic and melodic layers were so resolved and compelling that I was no longer content just nodding my head or tapping my hands to its catchy groove, but started feeling the urge to dance. Not to pick nits, but I detected some slight lingering harshness on the occasional electric guitar and amp/pedal, as if those deliberate distortions had grown exaggerated. (This arguably heightened the intended rough-around-the-edges effect.) But, wow, what these wires brought to the “detail reveal” game within my system rather exceeded my expectations.

Among the most impressive aspects of having the Morrow SP6 and MA6 in these setups seemed to involve unearthing and extracting the essences of performances through the finer points of vocal and instrumental details. The more accurately the textural, timbral, and spatial information was expressed, the more convincing and compelling the musical experience became. Think neutral and detailed without veering into analytical territory. The eerie and lush layers on Sharon Van Etten’s “Jupiter 4” from Remind Me Tomorrow range from swirling synths and highly resolved brushstrokes/taps to rapid-fire guitar flourishes and vocals that are by turn plaintive and hypnotic. Each element was distinct yet balanced and blended seamlessly into the mix, enhancing the song’s slow-building tension.

As for CD playback, which also involved the RCA interconnects, the Morrows achieved a natural-sounding sense of balance among all the layered instruments and vocals that provided a bit more realism, albeit with an occasional touch of perceived dryness. Sources were rendered with an easygoing and non-fatiguing effortlessness. This is not to say that the cables were at all slow, but rather that they facilitated a listening experience that leaned more toward leisurely relaxation than toward rocking out. In other words, there was a laid-back vibe; yet the musical information still came to you as pretty true-to-life.

I enjoyed this sense of leisurely basking within a smooth soundscape. I was only going to play a few tracks on Calexico’s Feast of Wire disc [Quarterstick], but ended up staying up late to listen to the whole darn album. Tiny details kept emerging—the tinny upright piano’s lingering decays, the cello’s warm bowing and body, and the ambient cues of the recording space on “The Book and the Canal”—drawing me deeper into the music.

In comparing the cables from the 6 series and the 3 series, as you’d expect, the primary differences are in the degree of resolution conveyed, correlating with the greater and lesser numbers of wire runs inside. Some additional tradeoffs I perceived in the lower-cost 3 series involved a bit more of that laid-back feel with slightly less punch on attacks—such as the block strikes and mariachi horns on “Quattro” from the Calexico disc, for instance. On playback of some recordings the vocals/singers  seemingly shifted forward, such as on some tracks from Holly Cole’s Temptation CD from Analogue Productions. The aforementioned sense of giving equal weight to instruments and vocals—assuming the source material warranted this—seemed dialed back by this greater midrange prominence.

These comments are minor points in the scheme of things and not meant as hard knocks against these wires. Lovely harmonics and low noise floors were still there. Instrumental textures and tones were still pretty credible and inviting. The amount of musical detail conveyed with these SP3 and MA3 wires in the system remained pleasing and non-fatiguing—and the fact that the 3 series wires don’t set you back a ton of dough makes them even more remarkable. That said, the 6 series cables seem worth the extra cash, IMHO.

Overall, I came away with very positive impressions of the cost-to-performance ratio in both the 3 and 6 series wires. These cables may have taken their sweet time to unfurl their full potential, but the sonic results were worth the wait. Sure, more expensive cables in my systems have yielded even greater results, in dimensionality, for one, but price-wise and quality-wise, Morrow Audio offers a broad enough range of cables to suit any customer, be he audiophile, music lover, or musician. In sum, these easy-to-use wires are also easy to on the ears—and on the wallet—making them, well, an easy recommendation.