A question for audiophiles: Does the word “lifestyle” give you pause when it comes to hi-fi gear? If a loudspeaker looks a bit too elegant, do you tend to question its sonic bona fides in relation to how much time, attention, and budget went into its design and finish? If so, be forewarned. In the case of Monitor Audio loudspeakers—and the company’s other offerings (such as integrated amps, streaming products, soundbars, and even soundframes!)—equal emphasis is placed on both great sound and visual appeal.

Although the British-owned-and-managed company has been in business for more than four decades, the brand is still somewhat under the radar in the U.S., but that’s likely about to change. Monitor Audio has increased its presence at U.S.-based hi-fi shows, and this year’s CES saw the debut of its flagship Platinum PL500 II loudspeakers, which delivered remarkably high-end (think Raidho-like) sound and style well beyond its $29k price. (Even JV was impressed by them! He gave them a shout-out in his show report, calling them the “surprise of CES.” I, too, was impressed by the PL500 II’s and will be reviewing them in an upcoming issue.)

Monitor Audio’s loudspeakers are divided into tiered categories whose precious-metal names are reminiscent of credit-card designations (and in keeping with the lifestyle aspects of the brand’s image): Bronze, Silver, Gold, and Platinum. Which brings us to the loudspeaker under review, the Monitor Audio Gold 300, which is the top model (alongside the Gold C350 for home-theater) in the eight-speaker Gold lineup. Given its build-quality, applied technologies, and high-end finishes, its $5699 (more for piano ebony finish) pricing seems fair. Far from frivolous, this model delivers style and substance in spades or, er, diamonds. It’s an elegant three-way floorstander featuring a pair of 6.5″ bass drivers, one 4″ midrange, and a high-frequency ribbon transducer that, according to company specs, has a frequency response extending from below 30Hz to over 60kHz! 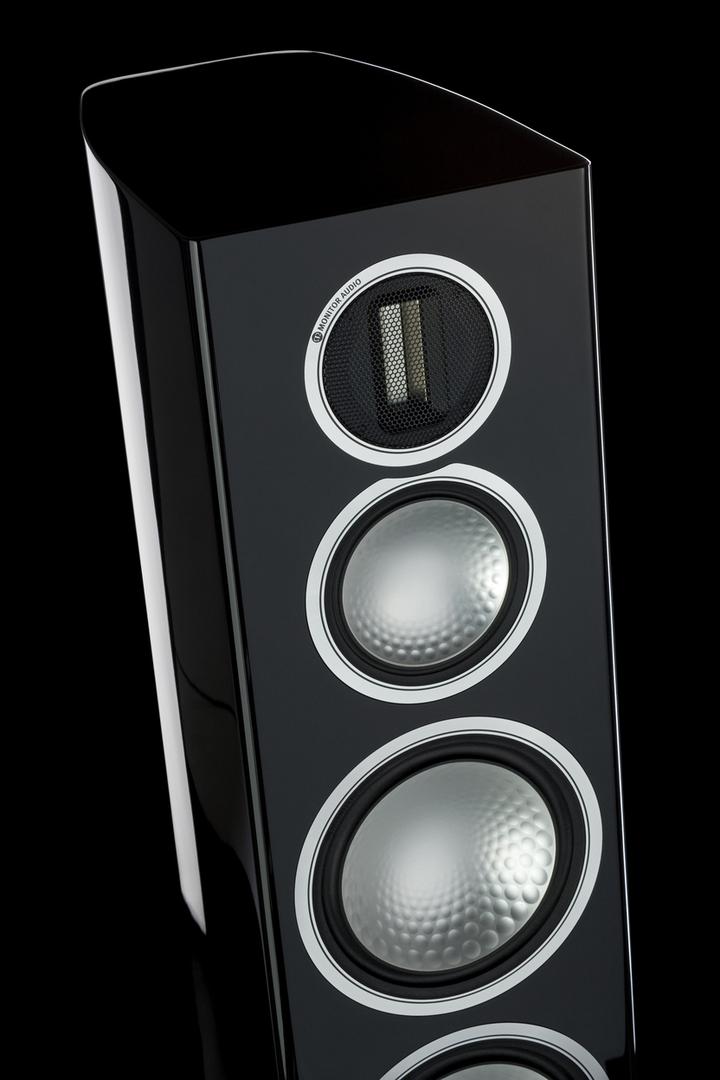 Monitor Audio’s Dean Hartley is the principal designer behind both the Platinum PL500 II and the Gold 300 and works closely to develop innovative technologies with the company’s engineering group, including the acoustic team (five people with three electronic engineers, six product designers, and five general project engineers). Dean is present for every listening session throughout product development as well. [I had lunch with Dean at the recent CES, and was greatly impressed by Monitor Audio’s driver and enclosure technology, as well as by the company’s dedication to sound quality. —RH]

A plethora of proprietary technologies has been employed inside the Gold 300, many with trademarked names, most notably the C-CAM (Ceramic-Coated Aluminum/Magnesium) alloy metal-dome drivers. Metal may not be an easy material to work with, but Monitor Audio is among the pioneers of metal-cone driver technology and has been using it for the past 20 years. Here, the complement includes a C-CAM ribbon tweeter and C-CAM (with RST, no less) bass and midrange. Melding impressive sound with cool-looking functional design, the drivers’ shiny metallic surfaces have small, round dimples in a graduated pattern that makes them resemble a kind of space-age honeycomb. Other trademarked elements are Pureflow Silver internal cabling and HiVe II port technology that is said to smooth airflow for improved transient response and tighter bass with improved tonal accuracy. The driver systems use single-bolt-through construction for decoupling from the baffles and (per company claims) to increase front-to-back cabinet bracing and stability.

The Gold 300’s smooth curved enclosure not only looks attractive, but is also said to reduce standing waves. As befits a modern-day high-quality speaker, the MDF cabinet features radial- and cross-bracing for greater rigidity. The speaker is available in four luxe-looking finishes—a dark walnut wood veneer, or high-gloss piano finishes in black, white, or ebony. Generally speaking, I’m a non-grille gal, but the ones here attach discreetly with “invisible” magnets for an unobtrusive and streamlined appearance. 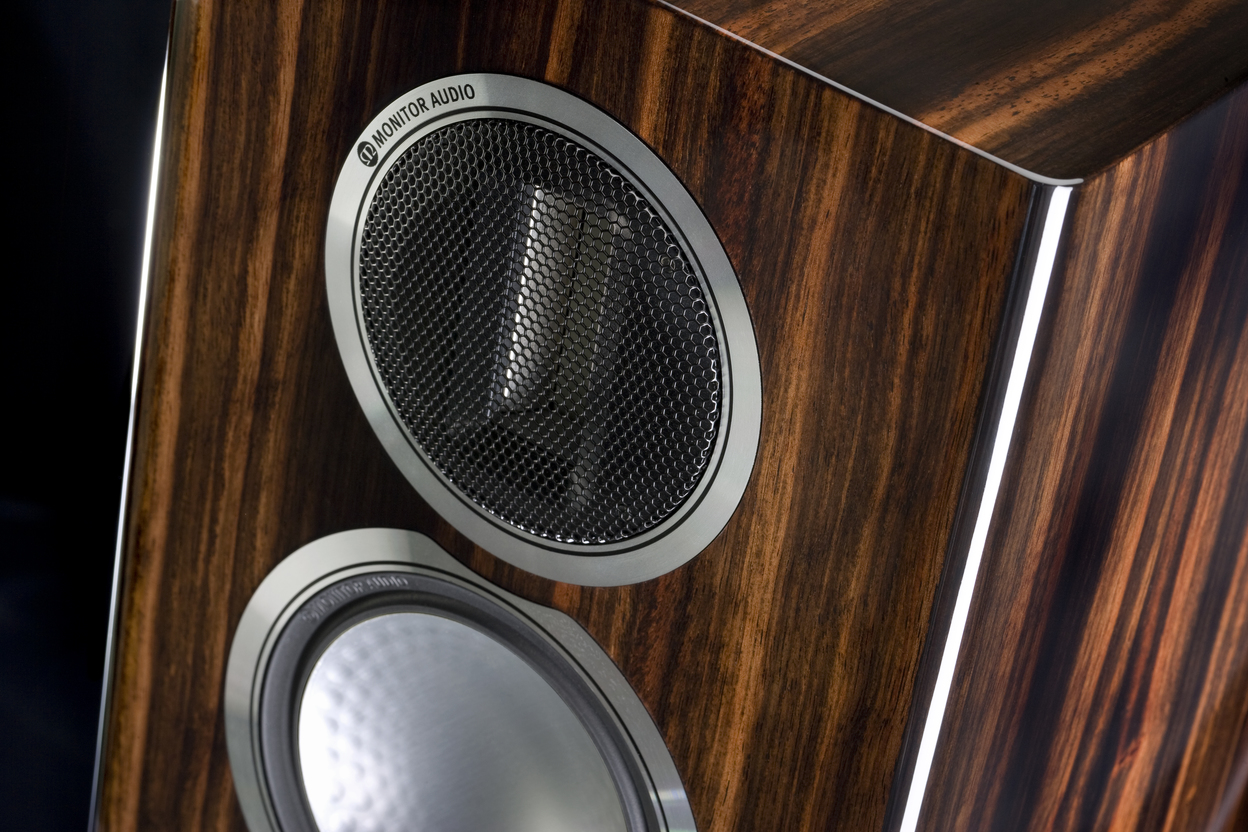 My review samples arrived in piano black lacquer, which nicely accentuated those futuristic-looking embossed metallic drivers. If this speaker had a dress code, it would be black tie. Of all the loudspeakers I’ve had in my systems at home, none has received more compliments than the ultra-high-gloss Gold 300. Even friends who aren’t audiophiles have been wowed by the speaker’s fine looks—and in short order, its superb sound impressed them in equal measure. But before I describe the 300’s sonics in greater detail, let’s talk a bit about setup.

The Gold 300s come with black-metal X-shaped bases with screw-in feet or floor spikes that connect via locking nuts and washers at each of the bases’ four end-points. After attaching those bases—which (luckily for me) was a straightforward assembly process using the bolts and Allen wrench included—I toed the speakers in slightly and positioned them roughly 8 feet from my listening-room sweet-spot and approximately five feet from the rearwall. Generally, this placement delivered immediacy, impact, and excitement, even at tempered volumes. Depending on what I was listening to—or in some cases listening for—I also spent some time sitting and standing farther away from the speakers (between 10 and 12 feet). This additional distance brought forth a greater overall sense of blended cohesion and coherence among the drivers. (Happily, my listening room is large and deep enough that I can afford to move my sofa back a couple of feet.) In fact, my only real criticism with this transducer was its fairly directly frontal projection at relatively close range. But as noted, some distance took care of this.

After appropriate break-in time, I began critical listening with the NuPrime IDA-8 Class A/D hybrid 100Wpc integrated amp (which I reviewed favorably in Issue 263). Its smooth liquidity and sense of effortlessness suited and balanced out the more or less “bottom-up” character of the Gold 300s. For the bulk of my listening my source was an Acoustic Signature Challenger Mk. 3 turntable with the German maker’s AS-1000 tonearm, an Air Tight PC-7 cartridge, and a Walker Procession on phonostage duty. I did some listening both with and without the addition of a pair of JL Audio e110 subwoofers, crossing over at 50Hz initially, though results proved more favorable when I downshifted to 40Hz, then 35Hz. I didn’t uncover an across-the-board preference; some LPs played back more pleasingly without the subs, others benefited from their added extension and fullness. On tracks such as “My Oh My” and “Never Mind” from Leonard Cohen’s Popular Problems LP, the resolution was remarkable with subs. Every detail of his gravelly diction came nearly as alive as if he were in the room. Fiddle and acoustic guitar, too, were reproduced with noteworthy naturalness.

Broadly speaking, some LPs seemed to fare better sans subs for definition, pacing, and vocal clarity, including Buena Vista Social Club’s marvelous Lost & Found [Nonesuch] collection of “lost” studio and live concert cuts, where guitars—especially the laúd (12-string Cuban guitar)—sounded as warm, heady, and beautiful as the Havana sun. The English Beat’s Special Beat Service [Mobile Fidelity] showed a lively ambience without subs, with plenty of air and space around vocalists and the plethora of instruments, from horns and saxes to strings and percussion. Soundstaging displayed reasonable depth and dimensionality, while bass lines resonated with respectable definition and without chuffing or noticeable overhang. Overall, I found that the NuPrime combination proved quite well balanced, pretty clean, and relatively neutral. Midrange proved to be a strong suit as well.

After some weeks with this system, I switched out electronics—the solid-state NuPrime amp and Walker phonostage for a Soulution 525 full-function preamp and the tube delights of an Air Tight ATM-1S stereo amplifier. (The analog source setup stayed the same.) The general impression here was a fuller and more beautiful sound with plenty of bloom along with slightly darker, richer timbre. Perhaps the most dramatic difference (or improvement) I noticed with these reference-grade electronics driving the Gold 300s was on the sweep and scale of large orchestral works. The gloriously sinister sounds of Khachaturian’s “Masquerade Waltz” [Analogue Productions], especially the lower registers of brass and deep woodwinds juxtaposed with the soaring strings, were felt as much as heard. Transient attacks as well as decays were more pronounced, lending a thrilling sense of realism alongside generous helpings of musicality within a deeper and wider soundstage. Broadly speaking, carefully chosen electronics seemed to expand these transducers’ repertoire—especially if you’re a classical music fan. 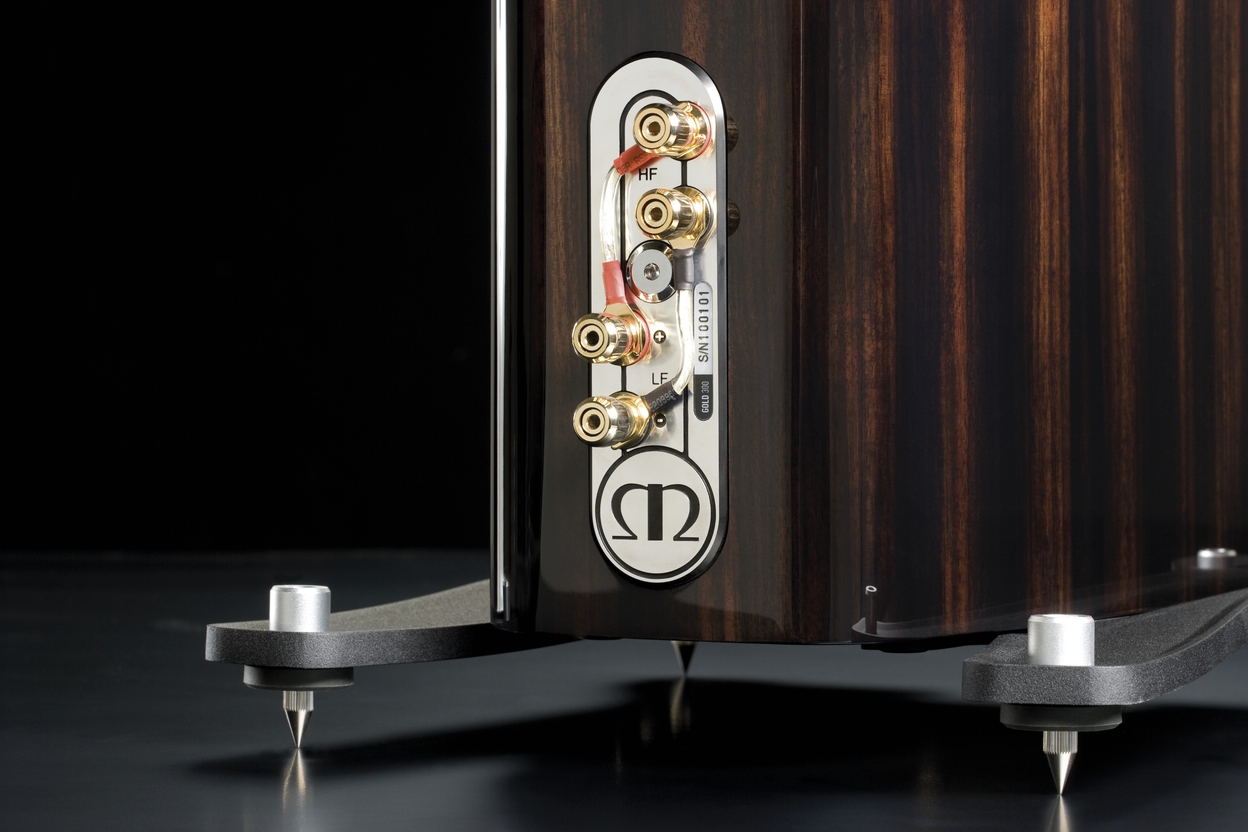 I thought it might be worthwhile to include a few comments by way of comparison with a different dynamic floorstanding three-way speaker in a pretty similar price range: the Focal Aria 948 (which I reviewed favorably in Issue 254). Call it the English versus the French (just kidding!). Both deliver plenty of resolution and detail, but like anything else, it depends on what you like. If you tend to go for transparency and true-to-source accuracy, you might prefer the 948. However, the Gold 300 was consistently balanced, rich, and full—and always sounded musical (yet without much in the way of coloration, depending in part on electronics). The Aria 948 has a more “top-down” sound with a fairly neutral-to-slightly brighter overall balance, while the Gold 300 displays a more “bottom-up” flavor with greater heft. Another important sonic consideration here is the Gold 300’s ribbon tweeter boasting remarkable range (per the specs) versus the Aria 948’s aluminum/magnesium TMF inverted-dome, which can walk a fine line between clean, razor-sharp precision and slightly brighter beaminess in the treble. (Bear in mind these comments are meant to be broad-stroke, at-a-glance comparisons. I recommend doing plenty of listening before buying.) Finally, from an aesthetics angle, they’re certainly both luxurious-looking, no matter which finishes you choose. The Aria 948 is more elegantly austere and slightly understated with its classic wood veneer, while the Gold 300 is more streamlined, slick, and shiny—more along the lines of a sexy car.

Beauty may be in the eye of the beholder, but the Monitor Audio Gold 300 represents a special breed of loudspeakers that successfully combines style with substance, as should be apparent from my experience. In addition to its stellar sonic capabilities (particularly throughout the midrange), consider that such a strikingly handsome speaker may be more likely to meet with partner/spousal approval. (I don’t want to let my review samples go.) Whether or not style is among your hi-fi priorities, the Monitor Audio Gold 300s are highly recommended for a long look and listen.