I first met Dan Wright, President of ModWright Instruments, Inc., at the 2001 CES; introductions were made by Mark Schifter at the Alexis Park campus. At that time, ModWright was still a fledgling company, having only been founded the year before, and one of its first accomplishments was providing mods to the then very popular Perpetual Technologies P-3A DAC, as well as an equally popular power supply for that DAC, the Monolithic Sound P3. What was remarkable to me was that you could order a new PT P-3A with the ModWright upgrades already installed—and they came with a full factory warranty! Aftermarket mods supported under factory warranty by the manufacturer? Yeah, that caught my attention.

By 2003, with everything going very well, Dan took the next logical step of creating his own line of gear. That year saw the introduction of his first product, the 9.0 Series of preamplifiers, including a phono preamp. The trend to offer high-performance audio with an emphasis on quality and value continued with the release of a balanced tube linestage, the LS 36.5. The acclaimed and gorgeous KWA 150 amplifier followed in 2009, and was soon followed by the LS 100 linestage and the KWI 200 solid-state integrated amplifier.

After a long gestation period, a tube-based DAC, the Elyse, and the original PH 150 (2014) were introduced, rounding out a complete ModWright electronics system. With the introduction of the Ambrose EL34 10W SE tube amp, and the remarkable 845 DS monoblock 32W SET amps, first shown at RMAF 2015, Dan’s passion for valve designs has been taken to the next level, and convincingly so.

Over this entire period of evolution and maturation, I’ve had the pleasure of reviewing and owning a fair number of these products (starting with a CD mod in 2001). When Dan asked me if I’d be interested in giving his new PH 150 Reference phono-stage a listen, I didn’t hesitate.

Somatic
At 17″ wide, 12″ deep, and 5″ tall, and with a 19-pound main chassis, the PH 150 Reference is fairly representative of devices in its category and class. The front faceplate features a cut-out ModWright logo, backlit in blue when the unit is powered on, and centered vertically and horizontally. Two large knobs about 2″ in diameter are situated to the left and right of that backlit logo, with recessed pushbuttons, each with its own indicator lamp, just below and between both sets of knobs. From left to right, you have input selection (mm, mute, mc), gain (–12dB, –6db, or 0dB), capacitance (0, 100, 220, 330, 470, and 690pF), and resistance (10, 50, 100, 200, 500, 1k ohms). The left push-button is power, the right is mono/stereo selection. I personally find it an extremely pleasing setup. 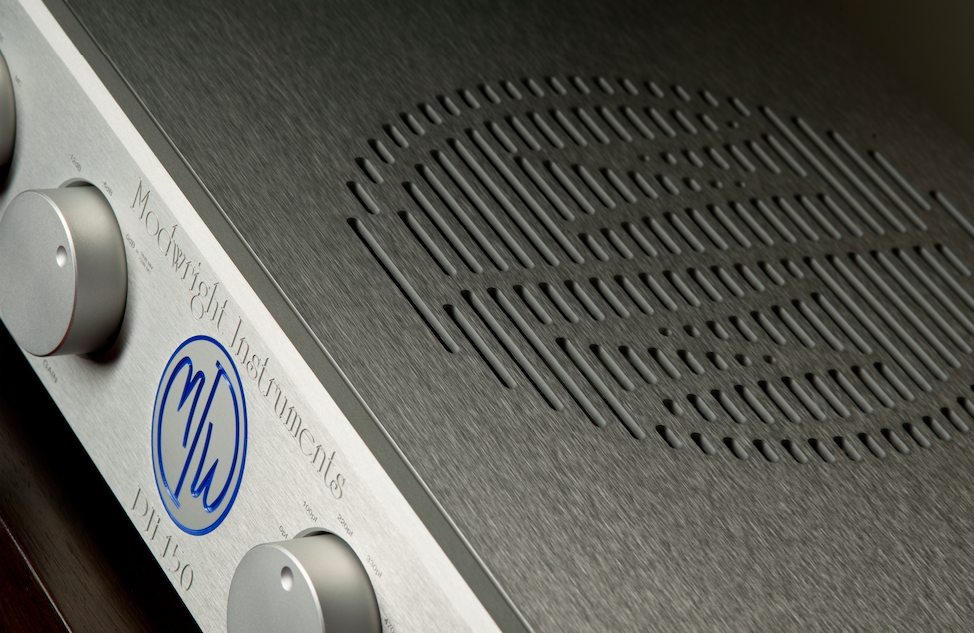 The PH 150 Reference is vacuum-tube design that exploits the advantages of an external power supply, and is ModWright’s most ambitious phonostage to date. The heart of its design is its external solid-state PS 150 power supply. Solid-state rectification and voltage regulation were chosen over the tube rectification and voltage regulation that have been at the core of many earlier ModWright designs. The PS 150 has an 8½” wide, 10½” deep, 5″ tall, 15-pound chassis, which houses the power transformer, current-regulating high-voltage choke, and both high- and low-voltage rectifiers. The supply connects to the main chassis via a four-foot-long custom umbilical featuring 8-pin locking connectors (male on the supply side, female on the chassis side). Both the umbilical connection and IEC socket are on the rear panel.

The first gain stage uses a single 6C45 vacuum tube per channel, in a tube/JFET hybrid circuit, for maximum gain and minimized noise. The choke-loaded second gain stage and final buffer stage employ one 6922 (6DJ8/7308/6922) dual-triode per channel. Coupling between the first and second gain stage and input to the buffer stage are achieved using ModWright’s own custom, oil-impregnated, polypropylene M Series Truth capacitors. Chosen because of their weight and body, the M Series caps contribute notably to the ModWright “house sound.”

The PH 150 Reference ships with Sovtek 6C45s and Electro Harmonix 6922s. The 6C45 is an indirectly heated triode that has been designed for wideband amplification of high-frequency voltage, and is arguably the finest and latest expression of small-signal triode technology. Both tubes were selected for their medium-high mu (voltage gain) and low plate impedance, and because they can deliver a lot of current. The 6922 is a heater-cathode type double-triode designed for cascode circuits as a low-noise, broadband audio-frequency amplifier.

In the buffer stage, the output is direct-coupled to a Lundahl gapped output transformer, with a selection of different secondary windings providing either unity gain or 6dB of attenuation. The final 12dB of attenuation is achieved using a simple voltage divider.

The design allows users to change resistive (mm) and capacitive (mc) loading, as well as adjust gain, safely “on-the-fly” from the front panel. Front-panel controls also allow selection of either the mm or mc input, as well as stereo or mono operation. Output signal selection (RCA single-ended or XLR balanced) and absolute-phase inversion may be implemented at any time using rear-panel toggle-switches. However, neither toggle-switch is demarcated for which position (up or down) represents which selection, RCA or XLR output, or 0 degrees or 180 degrees; nor are the default settings mentioned in the manual. I had to write to Dan to learn that in the case of the phase switch, down would be off, or 0 degrees. While this omission is an inconvenient oversight that could easily be addressed in future iterations, I understand the decision not to destroy the strong symmetry of the front panel by locating the switches there.

Romantic
Starting with the foundation, bass is tight, solid, and rendered with exceptionally well-defined pitch. Timbre throughout the lower registers is pure, with authentic tone and texture. The lowest three octaves are offered with authoritative weight, impact, and impressive slam when such information exists on the recording, with no demonstrable sense of softening or slurring.

Midrange tone and texture are among the PH 150 Reference’s great accomplishments. Everything from human voices, to horns, to pianos and strings is presented with purity, tonal accuracy, and almost effortless resolution.

Treble is pure, clean, and detailed, and perhaps most importantly, highly resolved. No, that is not “code” for overly energetic, etched, hard, or glaring. Rather, the PH 150 is truly detailed in the high end, with none of those traits that can be mistakenly interpreted as “resolution” in lesser gear. The PH 150’s almost magical presentation in the top octaves extends smoothly beyond the audible. One delightful result is a sense of “air” to spare, though never at the cost of detail or a softening of focus. 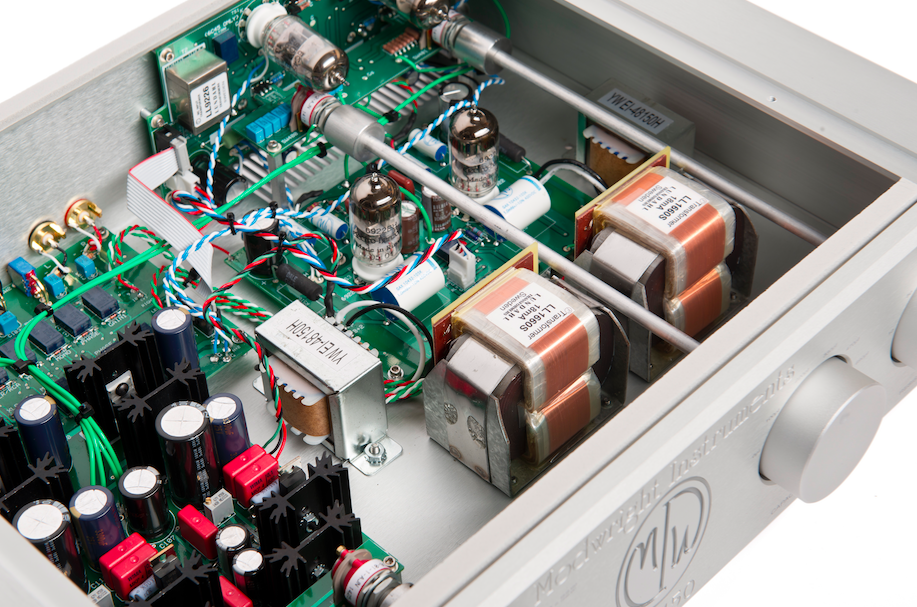 While it may not be the last word in resolution or transparency compared to über units such as the Audio Research Reference Phono 10, the D’Agostino Momentum Phonostage, or the Soulution 750 (all in the $30,000+ neighborhood), the PH 150 has the ability to serve up some of the most precise leading-edge transients I’ve heard. And its remarkably detailed view into the performance is full-bodied, as well.

Included among its other numerous strengths are an exceptionally low noise floor, the ability to portray bold and vivid tone, remarkably accurate staging and spatial cues, and wildly dynamic expressiveness. Its ability to capture silences, both with nothing tracking at all and between cuts, is remarkably reminiscent of the quietest noise floors I’ve experienced from phonostages costing considerably more. I cannot recall any tube phonostage I’ve heard that is quieter. As such, music through the PH 150 Reference is allowed to emerge or erupt from one of the blackest backgrounds that a phonostage can offer.

Horns, ranging from solos by Miles Davis or Wayne Shorter, through smaller rhythm sections like those of Chicago or Big Bad Voodoo Daddy, to the brass sections of symphony orchestras, have an incontestable purity of timbre, with a seemingly effortless conveyance of their signature brassy character. They are also imaged in realistic size and with stable location.

This ability to accurately express vibrancy of tone, with proper color and texture, and to realistically render body and instrumental bloom, with none of the euphonic warmth of less ambitious valve-only designs is again on par with much more expensive phonostages. In this particular regard, it quite possibly rivals my current reference, the Dynamic Sounds Associates Phono II.

As touched on, the PH 150’s ability to reveal spatial information—ranging from that on an intimate four-piece jazz combo recording like Dmitri Matheny’s 2014 Sagebrush Rebellion [Papillion/Blueport], to the vast acoustic of a large-scale orchestral work like Beethoven’s Ninth Symphony—with realistic size and accurate and stable individual voice placement is exceptional. I believe its inspired performance in this quarter is a result of the synergy of its remarkably low noise floor, superb resolving capability, and see-through transparency. I freely admit that staging is a hot button for me, and the PH 150 Reference surpassed even my relatively high expectations in this regard.

Combining tonal purity with musical transparency, the PH 150 also delivers remarkably swift transients and microdynamics. Its engaging ability to uncover detail, texture, and “space” down deep near the noise floor is quite exceptional.

On Rickie Lee Jones’ 10-inch, seven-song EP, Girl at Her Volcano [WB], the dynamism and subtlety of the piano work on “Walk Away Rene” and the power of the drums on “Under the Boardwalk” were simply stunning. The snap of Chris Layton’s snaredrum near the beginning of the title cut from Stevie Ray Vaughan’s Couldn’t Stand the Weather [Epic] was also sharply rendered: a visceral assault you feel as well as hear.

Again from Couldn’t Stand the Weather, the time-keeping of drummer Chris Layton has rarely been better resolved. Early in the opening of that title track there are several breaks as the band repeatedly pauses and restarts. During those breaks, Layton’s low foot-tapping was so audible, so clearly and cleanly outlined in space, you could almost envision what brand of shoes he was wearing!

Upper Class
This latest phonostage from ModWright is an exceptionally mature offering from a company that is growing into its prime.

Its hybrid tube-JFET circuit and robust external solid-state power supply give the PH 150 Reference the ability to combine the bloom, body, spatiality, and microdynamics of the best tube designs with the ultra-low noise, bass conviction, transparency, effortlessness, and pitch definition of sand-based devices.

At this price point, one has every right to expect something exceptional. ModWright’s gorgeous two-box unit is extremely well designed, confidently executed, and a pleasure to behold, visually and sonically. Its transparency, transient speed, timbral purity, palpability, expansive yet accurate soundstage, fine resolution, and deep, black, virtually silent backgrounds combine to make the PH 150 Reference a truly noteworthy achievement—and one of the best buys in, and even somewhat above, its class. I consider it a standout in a group that includes a host of other extremely accomplished phonostages including the Jadis DPMC, the Lamm Audio LP2.1, and the Zanden Audio Systems Model 120, to name a few.

In short, its ability to simply reveal music is undeniable and infectious. It is such a stirring and superb performer that I have sent ModWright my check; I am adding it to my stable of gear. Most enthusiastically recommended.