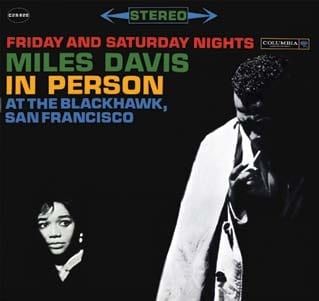 In Person Friday and Saturday Nights at the Blackhawk is an anomaly. Whereas even acoustic Miles generally recorded live albums in larger and more formal venues, these 1961 performances took place in a nightclub. On the heels of Kind of Blue and Sketches of Spain, the music here swings surprisingly hard: no brooding ballads, no ground-breaking experimentation, no walking on eggshells. Because Miles favored stable personnel over the wayfaring common in jazz circles and had reservations about this short- lived lineup, it’s surprising a recording crew showed up at this engagement, but fortunately it did. Seldom will you hear the great tenor saxophonist Hank Mobley, who led and graced dozens of classic Blue Note sessions, blow harder— or for that matter Miles; pianist Wynton Kelly is equally animated as a soloist and sometimes frisky accompanist. Mastered by Kevin Grey, this 180-gram two-LP set from Impex boasts remarkable clarity and a quiet pressing. As the owner of 31⁄2 copies of the original Columbia release, I’ve found that some pressings are better than others, and since a clean original will probably cost you at least much, you may want to snatch one of these limited- release issues before they’re gone.