Merrill Audio Advanced Technology Labs was founded by Merrill Wettasinghe with the goal of offering purist audio designs that aim squarely at the state of the art. As Merrill puts it, “We are focused on audio and not price points.” That’s an unusual stance for any high-end company, but comports with Merrill’s passion for fine audio and music. For someone who has studied piano for over twelve years and has been building audio gear since the age of 10, you would expect no less than a house sound that values accurate tonal reproduction coupled with the transient speed and detail of the real thing.

Not all phonostages are created equal. And I’m not fixated here on differences in RIAA circuitry. Over the years, all possible circuit types, active as well as passive, have been investigated. I’m not sure that one particular circuit is necessarily best. The key lies in execution and the Jens phonostage is a prime example of a good design executed in brilliant fashion. The designer, Jens Waale, was raised and educated in Denmark. He combines a genius for electronics with an undisputed passion for jazz, having actually taken the time to see the likes of Louis Armstrong, Ella, and Oscar live.

The Jens phonostage had an extraordinarily long gestation period. About five years were spent perfecting the design, at which point Merrill Audio commercialized it with Dr. Waale, adding a few modifications along the way. It should be noted that this is a moving-coil (mc) only unit; there are no provisions for moving-magnet (mm) cartridges, rather inconvenient for those of us like me who use a mix of cartridge types. The RIAA equalization is based on extensive calculations that take into account the loading effects of the front and back impedances surrounding the EQ circuit. The resultant RIAA accuracy is considerably better than 0.1dB. Both channels feature matched components for superb channel balance. The matching process is apparently quite long and costly; while Merrill Audio has become good at this, it still takes a lot of time to build every unit. 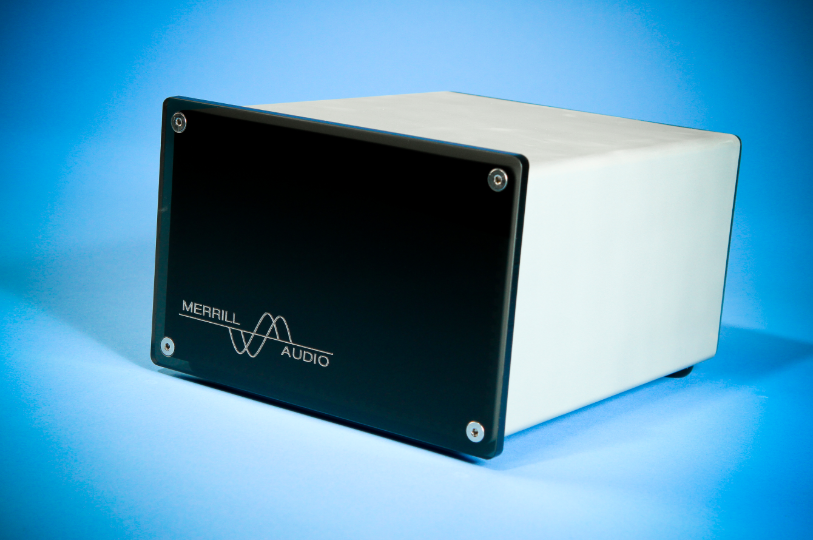 The external power supply, aptly named Kratos after the divine personification of strength in Greek mythology, provides a DC voltage to the main chassis via an umbilical cord. Each channel is completely independent with its own power supply and extensive filtering. The power supply features multiple stages of regulation and filters per channel. The overall gain is fixed at 72dB. To achieve such a high gain, several cascaded gain stages were implemented using FET and bipolar transistors, with component types selected for the lowest residual noise and high slew rates. Each stage has its own dedicated booster power regulation. Extreme care was taken to minimize noise. Each gain stage was hand designed on the PCB to bring the noise down to almost zero. The commercial PCB design is said to have taken six months to perfect. Much effort was spent on minimizing ground line noise, which meant finding the correct combination of grounding for the whole unit. This was initially based on basic principles, but the last mile as they say, was accomplished with a lot of trial and error. According to Merrill, “It took Edison about 2000 tries to get the light bulb correct, and that was about what it took to get the grounding correct.” The gain stages are encased in a copper shield to reduce external RFI. All of this effort resulted in a phonostage with barely measurable noise over a wide bandwidth up to 1MHz.

Cartridge loading is adjustable via two knobs located on the rear panel over a range from 5 to 5000 ohms in 12 discrete steps, which includes 100 ohms, my favorite setting for the Clearaudio da Vinci V2, as well as 50 ohms, which I use for the Koetsu Rosewood Signature. The selected impedance is not marked next to each knob detent, which forced me to move the knob fully clockwise to its starting point and then count the number of detents to reach a desired impedance. It would have been really nice if the selected impedance were displayed on the front panel. Instead, the front panel uses three pairs of blue LEDs to indicate the unit’s operating state. If everything is good to go, only the two bottom LEDs remain lit—very geeky but not super-helpful.

With a gain of 72dB, a 0.5mV nominal cartridge voltage is amplified to a 2V line-level signal. That means that in addition to a typical medium-to-high-gain preamp, the Jens may also be connected directly to a buffer preamp or autoformer volume control, unless your power amp is exceptionally insensitive. Because the Jens is supremely revealing of a cartridge’s sonic signature and tonearm setup, preamp selection becomes critical to overall system performance. Unless you choose wisely, the preamp may end up being the weak link in the chain and obscure the Jens’ remarkable clarity. It is deserving of a high-resolution system and will perform optimally in that context. I tried several means of volume control, and in the end settled on a tube preamp—in particular, the Supratek Chardonnay, because its imaging prowess complemented that of the Jens.

The Jens is not euphonic and does not glorify recordings with gratuitous second-order harmonic distortion. As such, don’t expect it to transform the timbral profile of your existing system. Paradoxically, its most consistent sonic signature is no signature at all. The perception of absolute purity devoid of all forms of distortion was endearing on exceptionally well-recorded vinyl. Of course, poor recordings had nowhere to hide, and the question in this case would be: Can your system handle the truth? I think most of us would be willing to relax accuracy in favor of a smidgeon of second-order harmonic distortion by introducing some tubes into the playback chain. Even a long-time solid-state designer such as Nelson Pass has come to realize that the fun factor of music playback should not take a back seat to accuracy. He recently designed and distributed the H2 harmonic generator, which allows the user to dial in a particular level of second-order harmonic, though about 1% seems to please most listeners. The basic idea is that many music lovers actually desire subjectively good sound. And if music playback is foremost about entertainment and emotional involvement, then the consumer should use whatever makes him or her happy. Hey, Nelson, I couldn’t agree more.

Tonally, good recordings were reproduced with a sweet midrange and layers of sumptuous textures free of irritating distortion artifacts. The presentation was never pushed forward, as is often the case when the upper midrange is bright sounding. Transients, both at the point of attack and during decay, flowed organically with speed and purity. The Jens was also highly revealing of microdynamic nuances and manifested extra gears to propel the music from loud to very loud without even a hint of distress.

The ability to decipher and connect with the emotional content of music, especially on vocals, is a priority for me. If you have ever wondered how a singer can mold lyrics to represent different emotional states such as joy, sorrow, fear, anger, as well as impartiality, you may be surprised to learn that psychoacousticians have studied this subject. Singers do this via phrasing and amplitude modulation. For example, the average syllable duration is shortest in fear and longest in sorrow. Anger is usually performed with the loudest sound levels, while fear is associated with the lowest levels and these patterns seem to mimic those used in everyday speech. I can try to point to objective criteria such as low distortion or transient speed, but they do not fully account for the perceptual joy afforded by the Jens of connecting me intimately with the music’s emotional content.

Probably the Jens’ second most thrilling sonic aspect is its ability to facilitate and construct a believable soundstage; depth, width, and yes, a height perspective in the case of a large planar speaker. Of course, there are no height clues encoded by the recording microphone. But in the case of a large planar speaker, such as the Analysis Audio Omega, with its large line-source quasi-ribbon, the impression of image height materializes, something a mini-monitor point source cannot accomplish. To be sure, the soundstage dimensional impressions I’m describing are subjective and can’t be measured by test gear, but are critical to the gestalt of being there. When everything was right, image outlines came to life distinctly, as if illuminated by individual spotlights, and bloomed with 3-D authority.

This ability to isolate individual voices and instruments was not confined to purist recordings in acoustic spaces, but was also apparent on multitrack recordings in which pan-pot settings for each track in the mix create an artificial soundstage. A case in point is Doyle Lawson and Quicksilver, a gospel/bluegrass release on the Sugar Hill label [SH-3717] dating back to 1981. It’s been near my top-of-the-pile for decades. When an album you know well—and that has been auditioned through a multitude of phono preamps—suddenly takes on new life, it’s a testament to the magic a piece of equipment like the Jens is capable of dishing out.

Think of the Jens as a labor of love and as a towering achievement in the realm of phonostage amplification. In the right high-end context, it delivers the music with a rare and remarkable combination of clarity, emotional conviction, textural purity, and superb dimensionality. I hope that the Jens tickles your buy-gene. I’m certain you won’t regret it.

Qobuz says “No” to MP3 in Move to All Music, One Price Plan, Studio Premier