Mercedes-Benz has created a novel technique for greatly improving the sound of car audio. The technology, called FrontBass, moves the woofers from the door panels to the footwells and uses the car’s structural beams as enclosures behind the woofers. FrontBass debuts in the all-new 2013 SL roadsters, and is expected to migrate to other Mercedes vehicles in the future.

The primary reason for this unusual placement was the opportunity to load the woofers in the “longitudinal beams,” two hollow rectangular structural members that run parallel to the ground from the footwell toward the engine compartment. Loading the woofers in relatively large sturdy metal chambers of just over half a cubic foot each instead of the doors confers significant sonic virtues, as you might imagine. 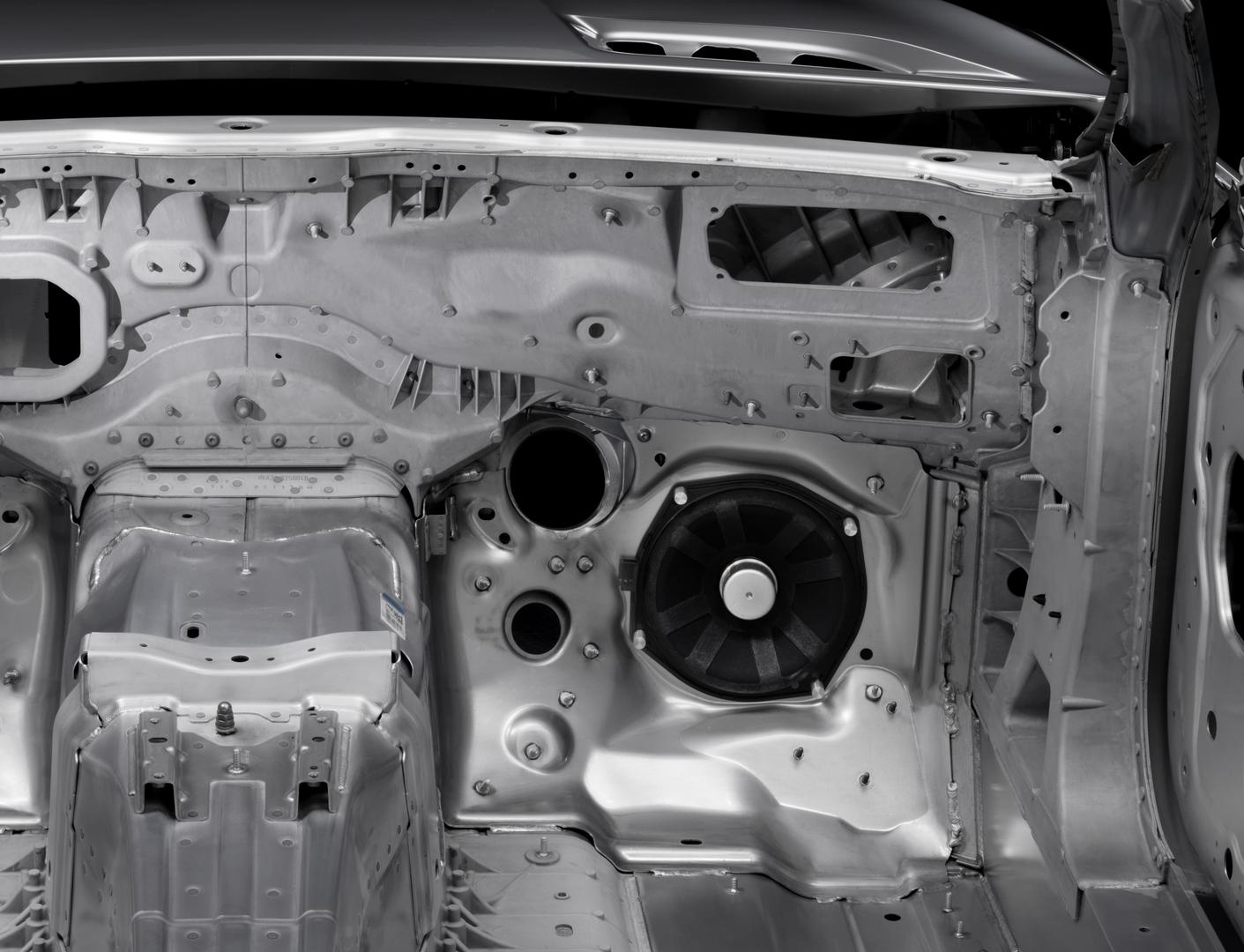 But this location led to many other advantages beyond woofer-loading. The woofers can be mounted on a sturdy metal baffle (Fig.1) that is integral to the car’s structure. Reducing baffle vibration is a primary goal for designers of freestanding high-end loudspeaker; baffle vibration is a significant source of coloration. By mounting the woofers on a solid piece of metal that is part of the car’s frame rather than in door panels, Mercedes engineers realized a significant immediate benefit.

The potential for better low-frequency reproduction-quality is just the beginning of FrontBass’ virtues. By moving the woofers out of the doors, Mercedes engineers could position the midrange driver and tweeter closer together, and higher up on the door, than in previous designs. Keeping the midrange and tweeter close together increases coherence. Moreover, positioning the drivers high up on the door results in a more open and spacious presentation. This mounting location also avoids the unwanted effect of a driver’s and passenger’s legs absorbing and blocking sound from the loudspeakers as happens with speakers mounted low in the doors. 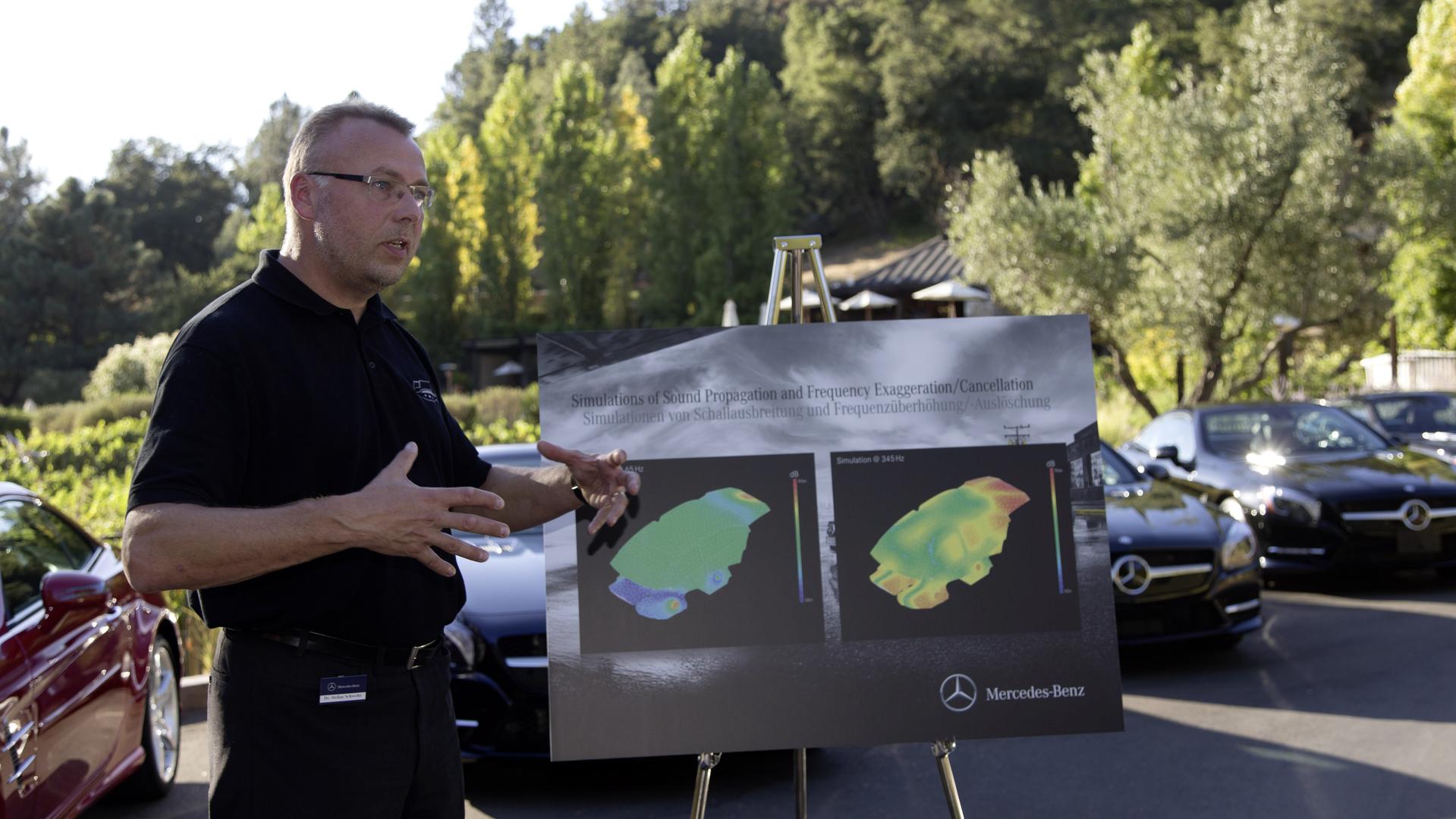 Mercedes engineers conceived FrontBass in 2004 and patented the technique in 2005. It took this long for FrontBass to appear in a vehicle for several reasons, not the least of which was the need to re-engineer the car’s structural components to meet crash performance requirements. Cutting large holes in the footwells to accommodate the two 22cm (8.6**) woofers necessitated a new design. Moreover, Mercedes needed to work with loudspeaker and electronics suppliers to redesign the audio system from the ground up around this new technology. Mercedes used this time to optimize other variables in car-audio sound-quality, including the absorption properties of the seats, which were taken into account when choosing interior materials. Dr. Stefan Schwehr, Senior Manager Human Machine Interface Comonents, whose group led the FrontBass development, showed us a number of acoustic measurements of the new system. In Fig. 2 he can be seen in front of a plot of bass distribution throughout an automobile cabin.

As I mentioned, FrontBass debuts in the all-new 2013 SL roadsters. Three audio options are available; a non-branded basic system, a Harman-Kardon package, and the top-of-the-line Bang & Olufsen system. All employ FrontBass and a 14-speaker surround system. The difference is in the amplifier and driver quality. 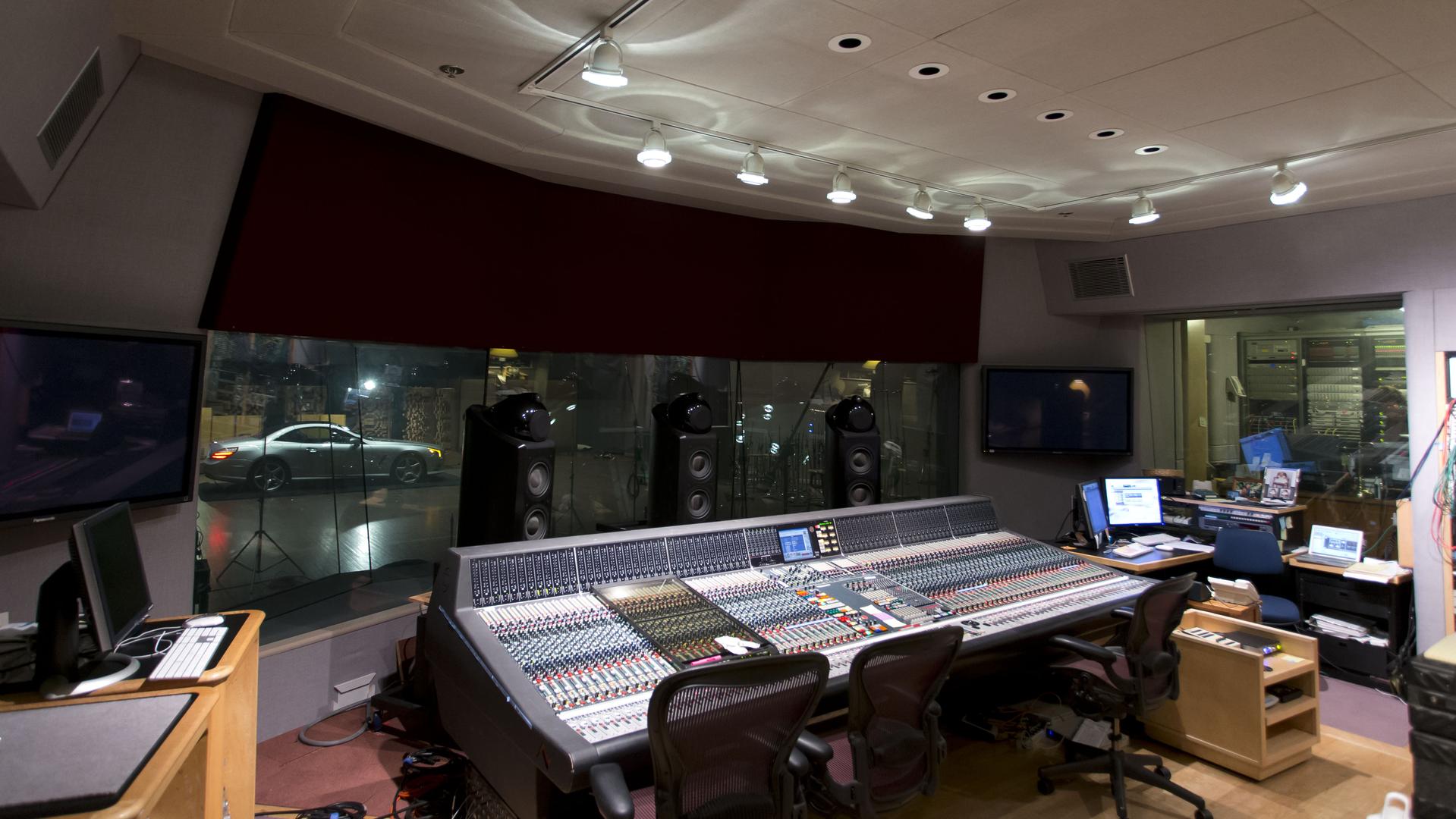 To show off car’s sound quality, Mercedes commissioned Skywalker Sound (Fig.3) to create a multichannel sampler disc specifically mixed for the SL’s acoustic environment. The disc is called Signature Sound, and might become a blueprint for future surround-sound releases available to Mercedes owners. Grammy-Award-winning engineer Leslie Ann Jones (Director of Music Recording and Scoring at Skywalker Sound) and producer Herbert Waltl remixed some classic pop and rock tracks, as well as classical recordings, to five-channel surround from the multi-track masters. The surround mixes were mastered by Michael Romanowski (who is also a partner in The Tape Project) and encoded into the DTS format for storage on a DVD-Video disc. The 14 pop tracks ranged from a classic Doobie Brothers hit, to Yes, to Creedence Clearwater Revival, to Lady Gaga. Ten classical tracks were also remixed to surround. An SL 550 was parked for several months on the Skywalker scoring stage, allowing Leslie Ann Jones to listen to a mix in the car and then walk a few steps back into the control room and make adjustments. (Fig. 4 shows from left to right Romanowski, Jones, and Waltl, with the SL 550 on the scoring stage behind them). 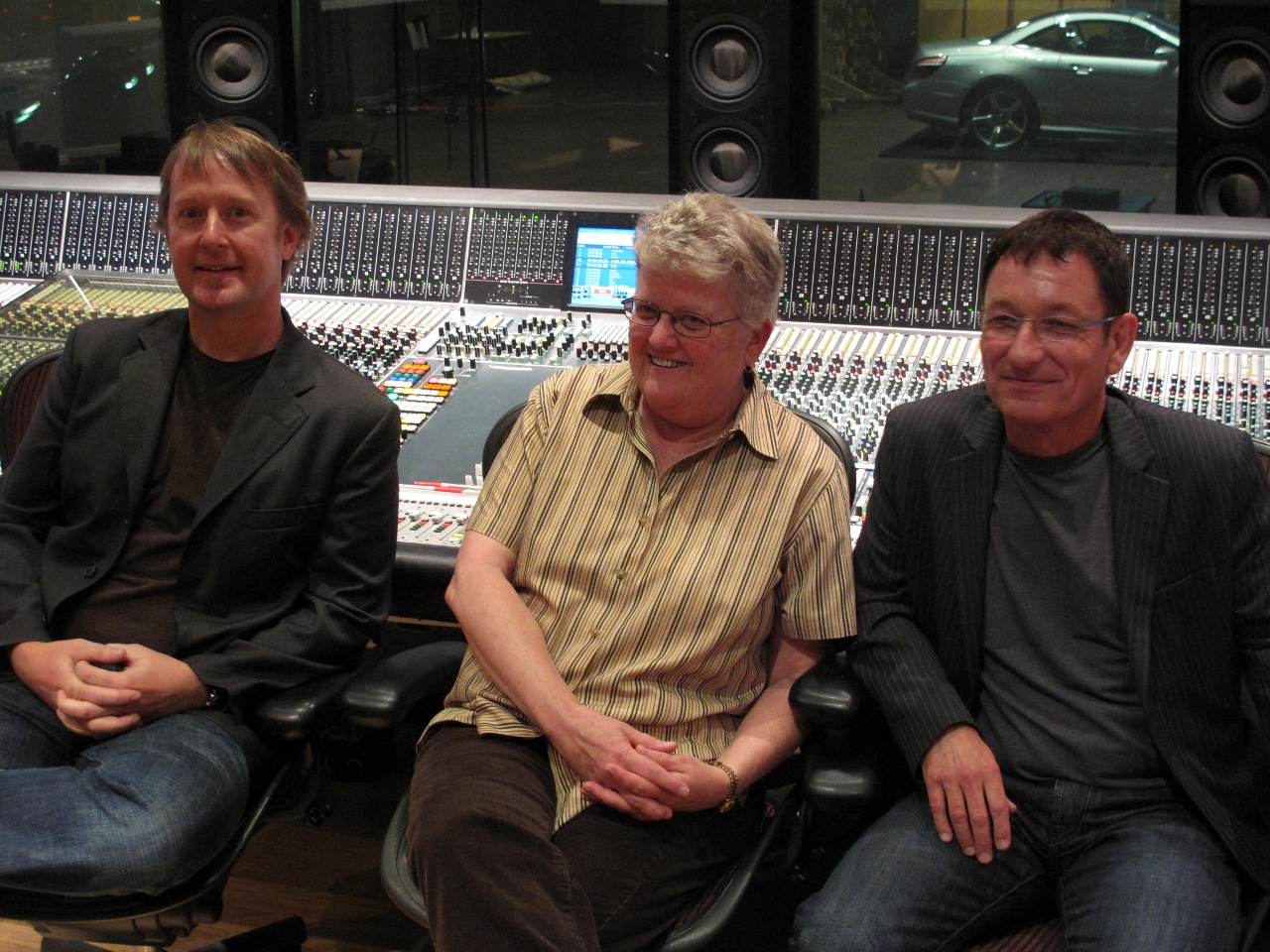 Although it wasn’t stated explicitly, I got the impression that this Signature Sound disc is a pilot project for future surround-sound remixes available exclusively to Mercedes owners. When I asked why the engineers didn’t create a DVD-Audio disc to take advantage of the format’s high-resolution discrete multichannel capabilities, the answer was that they wanted the first disc to be representative of future downloadable releases. I surmise that Mercedes will gauge customer reaction to the Signature Sound disc before deciding to get into the music licensing and distribution business. 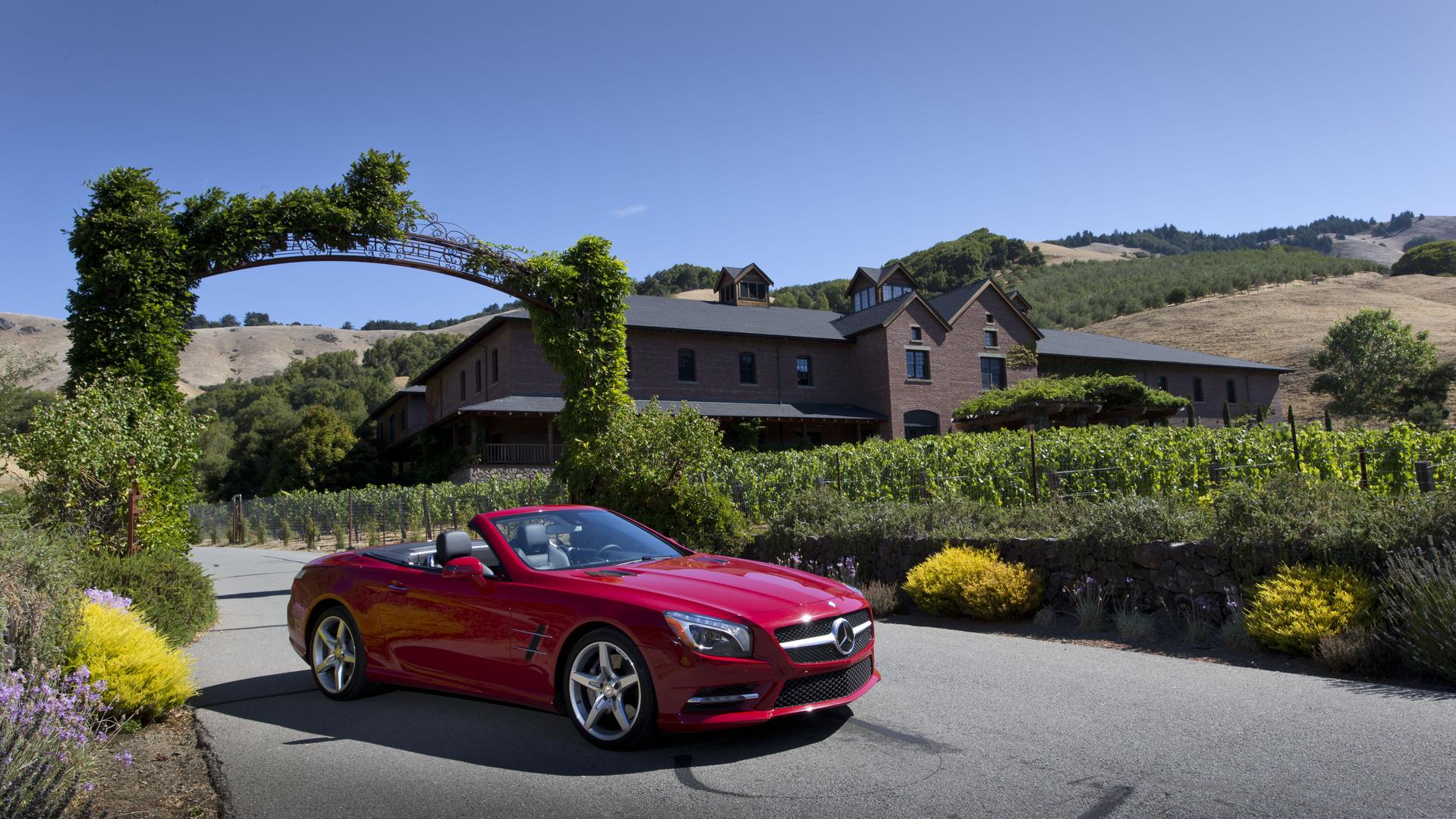 I was invited along with eleven automotive journalists from Germany and the U.S. to Northern California for presentations of FrontBass, a visit to Skywalker to learn about the Signature Sound disc’s creation, and plenty of seat time in the SL 550. (Fig. 5 shows the SL 550 in front of the technical building at Skywalker Sound.) In addition to evaluating the FrontBass system with the Signature Sound disc, I brought a wallet full of my reference music which, combined with the five hours of seat time (both driver and passenger positions), gave me a good feel for the SL 550’s sound. I was able to audition only the mid-level Harman-Kardon system, not the top-level B&O upgrade.

The SL 550 sounded extraordinary, with wide dynamics, outstanding bass, and a big, open sound that belied the two-seat roadster’s small interior volume. Playing tracks from organist Joey DeFrancesco’s CD Part III, I heard bass depth and pitch resolution that was unlike any other car audio system I’ve heard. On many tracks DeFrancesco plays the bass line on the Hammond B3’s pedals, and the SL 550 kept up with the very high levels of very low bass. I played this track at unrealistically loud levels to test the system and was surprised by the bass’ depth and power, lack of strain, and clarity of pitch. If the audio system can handle this disc at these playback levels, it can handle anything. Kick drum not only had real extension and impact, but the SL 550 system exhibited a transient fidelity that I’ve not heard before in an OEM car audio system. That is, the kick drum had a steep transient attack and equally sudden decay, infusing the music with a lively and propulsive quality rather than sounding thick and slow.

Vocals on the Signature Sound disc were particularly impressive, with convincing imaging above the dashboard. Lead vocals and other centrally placed instruments were spatially distinct from the rest of the mix, but fully integrated with it rather than sounding detached or disembodied. It’s an interesting phenomenon to hear from a car stereo a centrally placed image as a pinpoint in space (just as we hear it from a high-end home system).

The midrange and treble were similarly impressive, with a smooth yet detailed tonal balance. The cymbals on the great 88 Basie Street combined delicacy and finesse with detail and resolution. The sense of air around the cymbals was also outstanding. I was particularly impressed by how much the sound changed with the recording quality. The SL 550’s system didn’t impose a “sameness” to all music, but rather was transparent enough to resolve subtle differences. Overall, the SL 550’s audio system was terrific, particularly considering the small cabin. I wish I could have heard the top-of-the-line B&O system.

The car environment poses some difficult challenges for audio designers. The speaker placement options are limited, there’s lots of reflective glass, and the cabin volume is small. On the plus side, however, the designer has several advantages over, say, a designer of freestanding loudspeakers. The car-audio designer knows precisely where the speakers will be positioned, where the boundaries are, and where the listener will sit. The design team behind FrontBass and the SL 550’s audio took maximum advantage of these variables to create an exceptional-sounding system.

As much fun as I had listening to the music system, the SL 550 was the star of the show. This is a spectacular car, merging luxury with sport, massive power with refinement, and classic styling with a modern look. Now the venerable SL has an audio system that’s just as thrilling as its driving quality.

Jim Smith joins Lee Scoggins as he talks about his […]