Some of the most noteworthy companies in the high end don’t do it. Magico doesn’t. Neither does Rockport nor Wilson Audio nor Audio Research. But Burmester and TAD do. What I’m refer- ring to are companies that produce a complete chain of components from source components and amplification to loudspeakers—the soup-to-nuts manufacturers. Yes, they are rarities; yet giving a buyer the opportunity to assemble a bespoke system built from a common vision by a single manufacturer is an attractive proposition to many—just as it is for the manufacturer, where one-stop-shopping adds more to its bottom line. It’s attractive for the allure of system integration and continuity. And there’s the implicit promise that everything having been designed under the same roof, a synergy of performance is achieved that goes beyond the much more common mix-and-match approach. MBL of Germany is one such company.

With its iconic line of Radialstrahler omnidirectional loudspeakers sup- ported by superb Reference Line source and amplification components, one word that never comes to mind when you think of an audio system by MBL is submissive. MBL is among the most dominant, alpha-wolf players in the high end. Whether it’s a system built around the MBL 101 E Mk.II Radialstrahler or the four-tower MBL 101 X-tremes, its products impose their musical will on the listener and are the envy of every eye in the house.

But what about audiophiles who long for the full MBL treatment, have the financial resources, but are limited to smaller environs? They’ve not been forgotten. This is a full MBL system review. The whole frankfurter. It’s composed of three of the six all-new (and exquisite) Corona electronics and the MBL 120 compact loudspeaker. My impressions, except where noted, reflect the sound of the system in its entirety. (LP sources were reproduced courtesy of the Parasound JC 3 phonostage.) 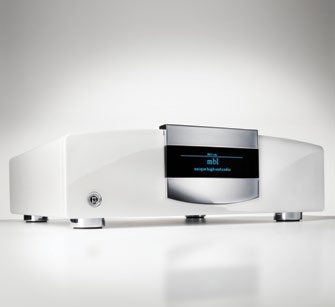 This is not my first encounter with MBL loudspeakers. The MBL 121 was one of a handful of truly great reviewing experiences, and in spite of a few small reservations I said as much in Issue 176. However, time doesn’t stand still and, though the 121 has now been relegated to the past, in its wake comes a new generation of compact Radialstrahlers led by the MBL 120 and the slightly smaller MBL 126.

In a way, this review turned into something like a homecoming—like revisiting an old friend. That is, an old friend who’d been putting in a lot of time in the weight room. Visually the MBL 120 profile is mostly unchanged, but, in engine-speak, it’s been heavily bored and stroked. It remains a stand-mounted omnidirectional three-way, now employing MBL’s latest cutting-edge, radial, carbon-fiber midrange and tweeter drivers known for their delicate petal-like diaphragms. These are proprietary designs, manufactured virtually by hand and not seen anywhere outside of MBL. The mid- range and tweeter drivers sit atop one another in an array situated above a new, much-more-rigid, bass-reflex cabinet. There a pair of 6.5″ side-firing aluminum, long-stroke mid/bass drivers (in- creased in size from the 121’s 5.5″ drivers) are aligned in a push- push configuration and mounted on a solid aluminum block to eliminate spurious cabinet resonances. Refinements abound, ex- tending even to the head plate of the speaker stand (optional but fairly necessary), which disappears seamlessly into a recess of the speaker enclosure, permitting the routing of speaker cables through the stand to an exit at ground level–an extremely tidy installation.

Sonically the 120 is a more refined speaker than the 121 in every category. It’s more extended across the frequency spectrum and far less colored in the mid and low bass, yet it retains an element of warmth and romanticism that makes music physically come to life in the listening room. Its overall sonic character is consistent with every Radialstrahler I’ve experienced—a character that makes it a standard-bearer for low-level resolution and micro- dynamic nuance. Its rendering of dimensional space is nearly tactile. And when I play back something like the virtuoso solo acoustic guitar of Lawrence Juber [LJ Plays the Beatles, SolidAir], the speaker virtually dissolves as a source within the soundfield, leaving something akin to an invisible man fingerpicking in my room. With the lights down it’s almost kind of creepy. I’ve heard the 101 E back-to-back with the 126, and except for the greater extension and dynamic output of the 101 E they were sonically indistinguishable.

The most impressive single achievement of the 120 in my view is that MBL’s chief engineer Juergen Reis and his team have not simply enlarged the cabinet and improved extension and output, they’ve also reduced resonant colorations to a significant degree. The speaker is more comfortable than ever before with heavily weighted orchestral music. There’s greater fidelity to musical timbre. The cabinet is so colorless that the full voice of an instrument from transient through decay isn’t chained to the box or port. And for a speaker like the MBL, where the midrange and tweeter array is not only baffle-less but utterly transparent, the initial worry is whether the conventional box enclosure will smudge and slow the presentation throughout the crucial transition range from midrange octaves to bass. This is something I listened for with interest during the Jen Chapin recordings ReVisions [Chesky]. The amount of air that the baritone sax and stand-up bass move in this recording can seriously overpower a good loudspeaker, dampening transients and suffusing fundamentals with rhythm-impairing overhang. It’s a pitfall similar to the discontinuity sometimes noted when transducers of differing types—ribbons and dynamic drivers or a powered sub and electrostatic panel for example— are mixed and (mis)matched. The 120 manages the transition with grace and gusto. It’s one of the most controlled reflex enclosures I’ve encountered.

Bass not only extends into the mid-30Hz range but does so with a musicality that few other stand-mounted speakers can muster. The plucky 121, for example, had good firm punch that kept it in the game into the forty-cycle range or so, but its roll-off below that frequency was fairly severe. Not so the MBL 120, which not only extends into the 30Hz range, but eliminates the brick-wall roll- off below that. The 120 truly stands its ground, undaunted and undisturbed by the onslaught of bass drum and tympani bursts during the Copland Fanfare [Reference Recordings], reproducing each salvo with a remarkable combination of impact, weight, and grip. And when it finally begins rolling off in the low end, it does so ever so gradually, without drawing attention to port or box. I could not localize the enclosure in the room.

In my space at least, basic RTA measurements from the listening position indicated only the smallest frequency deviations from flat. Beyond the predictable room gain in the midbass there were no significant bumps or dips. But I didn’t need a meter to hear the superb tonal balance. A few short minutes with Stravinsky’s Pulcinella, from the glorious Argo pressing, were all that was required. In my listening room, no system worth its salt does not at some point have to contend with this naturalistic and demanding LP. This is the kind of material the MBL system cuts its teeth on. And in most instances it is unmatched in its ability to retrieve ambience in an acoustic setting, and to define timbral and tonal contrasts, running the gamut from a soaring piccolo to a throaty trombone to a bellowing bass, with all kinds of transient delicacies. No, it can’t quite summon the full dynamic authority and deep bass reserves of a TAD Evolution One or Wilson Sophia III, both brilliant floorstanders, but other than that there’s no room for complaint.

Soundstaging is the bailiwick of all Radialstrahler models. Yet for the uninitiated it also reminds one of the different philosophical camps of music reproduction. Beyond tonal fidelity the MBL system draws one into its unique ambient reality. With every note it reminds you that you are no longer in the world of direct-radiating monopole speakers. It’s a realignment that emphasizes the entirety of the music event first and places a specific soloist in the context of that whole. And that “whole” has never been more holographic and enveloping as when reproduced by this system. It’s no exaggeration to state that the 120 exists to reproduce choral music like the Rutter Requiem. It gathers together the extremes of low-level detail and macro-dynamics—from the soaring soprano soloist and plummeting organ pedal points, to the individual voices and sections of the Turtle Creek Chorale—into the vastness of the hall acoustic. The harmonic interplay is complex and silken, the overall impression profound and full of emotion.

One issue remains the same for me. The MBL 120 is more effective with some genres of music than with others. In contrast with the traditional direct-radiators its omnidirectional-design slightly de-emphasizes the sweet spot. For classical music and jazz ensembles and chorale work I find this characteristic entirely compelling and natural. For close-miked studio albums, which lack much in the way of natural acoustics and ambience, individual images become less fully realized and fleshed out, less there. On the other hand, off-axis listeners benefit from the omnidirectional behavior and quite literally hear more music compared with traditional designs (where sitting farther to one side of the ideal listening position emphasizes the channel closer to that listener). This is no small difference. I can’t tell you the number of friends who unknowingly fell in the love with MBLs because of how much music they were “getting” at even the most absurd listening positions in my room. Which is correct? Omnis or standard forward-radiating monopoles? They both have their own valid claims. And since it’s an unwinnable argument, personal taste and listening habits will have to be your guides.

While I have more to say about the Corona electronics in the extended sidebar, in some ways I can’t say enough. Prior to adding the Corona ensemble to the mix I spent time listening with gear that ran the gamut of price points all the way up the mountain to TAD C2000/M2500 combo. The more expensive TAD gear was exemplary in low- end control, speed and dynamic thrust— some of the best I’ve heard. And this makes a lot of sense considering the fact that I’ve also recently taken possession of the TAD Evolution One loudspeaker, a true full-range product that needs a tight-fisted dose of low- end attention to sound its best. However, I also thought that musically the Corona gear serves the MBL 120 more persuasively. It retains the gravity and weight of MBL electronics but it also brings out a more lush romantic aspect in the loudspeaker. There’s just a little more sweetness to Anne Sophie- Mutter’s violin and bloom to Edgar Meyer’s acoustic bass and warmth in a lengthy reverberation of a drum. There is not an octave where astringency of any kind rears its head.

Final note: Like all omnidirectional loudspeakers the MBL 120 can be a challenge to dial in. Experimentation is encouraged: cheating this way and that way until you fine-tune the balance of direct sound and ambience that corresponds with your own particular listening bias. The rewards are magical, however. Suffice it to say this is no blue-collar system. All in, buyers will be looking at fifty grand or so, and that’s quite a splurge. (MBL’s entry-level system comes in at $32k.)

But it’s still a fraction of the price of a full-bore MBL Reference Line setup. Without a doubt MBL has created a system competitive with its finest efforts, but scaled down to accommodate smaller spaces (not lesser aspirations). It’s complete, it’s turnkey, and it’s an MBL. It’s hard to argue with that.

Paul Simon: So Beautiful or So What