I’ve never listened to a MartinLogan speaker before. That’s a gap in my audio experience that I’ve wanted to fill for a long time. So it was with genuine excitement that I accepted the review for the company’s newly revised and updated 35XTi bookshelf model. I wasn’t sure what I was getting myself into, but it’s hard not to look forward to something from a venerable company like ML. Maybe I’m letting my nerd colors show a bit here, but hey, if I can’t be an equipment geek in The Absolute Sound, I might as well give up.

Anyway, when they arrived and they weren’t ginormous electrostatics that look vaguely like dinosaurs, I was baffled. I mean, MartinLogan makes big flat obelisks, not boxy bookshelf speakers. But here’s the thing: As soon as I plugged them in and started listening, I forgot all about what I thought I knew about MartinLogan, and just enjoyed the music. That’s a hard thing for me to do, by the way. A speaker that turns off the old hamster wheel in my skull and makes me ignore everything but the sound is doing something impressive.

On the surface the MartinLogan 35XTi ($699 each) look like pretty standard bookshelf models. My review pair came in a nice reddish walnut with a curved silver MartinLogan badge beneath smooth, simple grille covers. Under the grille are a 1.25″ by 2.4″ Folded Motion XT tweeter atop a 6.5″ aluminum cone woofer. The tweeter in particular is interesting—it’s based on the Heil air-motion transformer concept—and a nice break from the standard dome driver. The 35XTi’s have solid, quality binding posts that allow for bi-wiring, which I did not use in this instance, but which would certainly benefit the listener. I did all my listening with the speaker grilles off and found the sound a bit tighter that way. 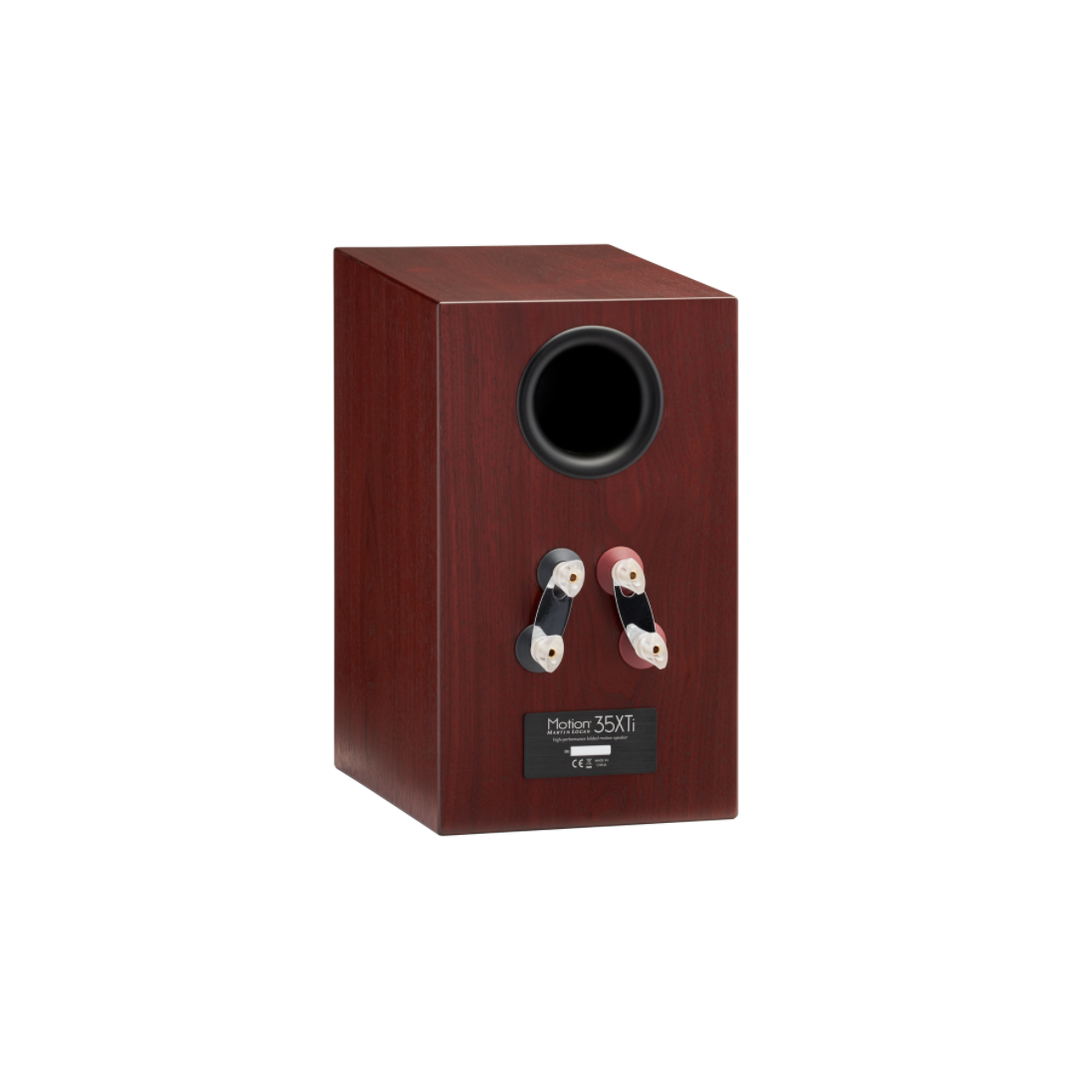 MartinLogan rates the impedance of the 35XTi at 4 ohms and recommends a power amp of anywhere from 20Wpc up to 250W. My Parasound HINT 6 integrated amp sits toward the upper end of that spectrum. Though the ML’s sensitivity is listed as 92dB/2.83V/meter, suggesting that 20Wpc would likely be fine, I’d err on the side of caution. I never felt my HINT 6 was getting anywhere near straining these speakers, but I suspect they might be less contented when driven by an amplifier at the lower end of the recommended power range.

My initial impressions were overall very positive. The fit and finish was impressive; the 35XTi’s looked neat and clean; and my first few minutes spent listening to them with background music were enjoyable. If I’m not going to get their big planar speakers, I guess these are the next best introduction to MartinLogans.

I began my serious listening with a new jazz album called Reverence from saxophonist Muriel Grossman on the fantastic RR Gems label. Side III opens with a screaming, almost cacophonous wail from Grossman’s saxophone that eventually resolves into a rhythmic jam called “Chase.” The Hammond here drove the sound, overwhelming the drumming. I was surprised at how tight the bass was; indeed, the 35XTi did a very nice job with the rhythm section as a whole. On some speakers an organ can sound a little mushy and undefined, but not here. I caught flourishes from the Hammond player rising up in the mix as Grossman continued her lilting solo.

The next track on that same side is called “Tribu” and starts with a rolling bass solo. It showcased the 35XTi’s depth and strength in the lower region. They don’t dig down deep and likely won’t shake the floor, but their bass was still dynamic and solid. After the bass solo ended, the cymbals came in with very nice sparkle and no uncomfortable glare. At times though, the saxophone could sound a little bit too intense, especially in the throes of a really good jam. As a consequence, I found myself playing the 35XTi’s a little quieter than I normally would, which didn’t necessarily take away from the pleasure I got from listening to them.

When I switched over to my Zu Dirty Weekends and played the same track for comparison, I found the guitar and saxophone leads were a bit smoother and the combination of the bass and the drums had a little more clarity. Not to say that the 35XTi was lacking in either department—far from it, actually. I liked the forward nature of the 35XTi’s midrange. It felt forceful in a good way. So far, though, I felt that the upper-midrange and treble really shined the most, especially compared to the Zu DWs. Maybe it was the Folded-Motion tweeter, but the cymbals had just the right amount of sparkle without getting all grainy and uncomfortable. Even the Hammond’s loudest high notes weren’t shouty or harsh, which was a small miracle.

Next up, I put on Lana Del Rey’s new album Norman ____ Rockwell. I couldn’t think of any other album to better demonstrate midrange purity. Del Rey’s signature breathy vocals are buttery smooth and absolutely flawless, and the arrangements flit from stripped-down acoustic guitars to full-fledged orchestral bombs. Her neo-gothic and very American style feels like pop on the surface, but her layered lyrics and breathy vocals really elevate every song she puts together. Needless to say, I’m a fan. The track “The Next Best American Record” is a very self-aware ballad with Del Rey’s vocals front and center. The reverb and acoustic guitar accompaniment simply sounded easy through the 35XTi. During the chorus, when her voice moved up through her range, the shimmering quality of her vocals came through clear as day. Del Rey has the ability to be both soft and strong, and the forceful presentation of the 35XTi really reinforced that dichotomy.

I think that was the aspect of the 35XTi’s that I liked the best. Their impactful forwardness—for lack of a better term—felt driving and engaging. However, that same enjoyable intensity could occasionally come off as harsh or a little too forward. These aren’t the most neutral speakers I’ve heard, or the warmest, but they have an enchanting quality about them.

I finished my listening back on the turntable with an album from the spiritual-jazz-oriented trumpeter Matthew Halsall. He’s had a few albums reissued lately, and I grabbed the deluxe version of the record Colour Love. On Side C, the track “I’ve Been Here Before” begins as a slow, almost sensuous march, centered by the trumpet’s call and colored by a shimmering harp. To my ear, that deep, lingering bass note was the center point around which the composition seemed to flow. The 35XTi reproduced it with aplomb—a nice, appropriately booming note in contrast with the ethereal harp and trumpet playing. It was that impactful quality again, making even a slow, quieter song come across with power.

A more upbeat outing from Halsall and company was the track “Mudita,” a nicely rollicking tune with a very solid and interesting drum solo toward the end. The mix showcases the dynamic range of the drums, and fits perfectly into the 35XTi’s profile. Cymbals shimmer, sparkled, shone, and the kick, snare, and toms were all firm and carried a nice wallop. When the horns came back up again, the drums kept rolling, contrasting with the almost gentle trumpet style. It had me nodding along the whole time, really just enjoying the stomping beat.

In the end, I liked the 35XTi. It’s as simple as that. They look nice and their sonic qualities kept me listening. In fact, I’ll probably leave them up for a little bit past the end of this review, just because I like them. There are a million different ways speakers can voice music, but it’s those presentations that keep me sitting and listening that really matter. The 35XTi really hit it out of the park in this regard. I think they’d be great party speakers, and they did my ever-growing jazz collection justice. Well worth a listen.