Of all the gear I’ve had the good fortune to own over the course of the past two-and-ahalf decades, the Mark Levinson Nº 31 Reference CD transport, Nº 35 digital-toanalog converter and Nº 38S preamplifier easily stand out as some of the finest components to grace my listening room. Few will disagree that the Nº 31 was an absolute work of art when it came to both sound and build-quality. (Still makes me grin to think about how incredibly cool it was to show off that motorized lid to all my audiophile buddies.) In combination with the Nº 30 DAC (as well as the more affordable Nº 35), these two stunning pieces made for arguably the best CD playback available at the time.


The Nº 38S was also beautifully crafted, and while it embodied the same kind of sonic sophistication that has been the hallmark of Mark Levinson products since the company’s inception back in the early 70s, I found the preamplifier to be a bit less engaging than expected, and perhaps too polite. It was all-in-all still a nice unit, though, and one that I never had any remorse about buying. The only thing I did regret back in the earlyto mid-90s is that I never completed the system I had worked so hard to assemble with Levinson amplification.


So it was with much anticipation that I awaited the arrival of the Mark Levinson Nº 436 monoblock power amplifier for review. I was also quite excited at the prospect of hearing how these $12,500, 350Wpc brutes would mate with the stellar imaging and accuracy of a loudspeaker like the B&W 800D. Would my decade long wait to finally hear a pair of Levinson amps in my system meet my expectations? At the risk of ruining the ending for those who are actually able to resist reading the conclusion first, I’m afraid I knew the answer to that question nearly straight out of the box, and have heard nothing in the months to follow that would change my mind. The 436 is easily one of the best and most pleasurable amplifiers I’ve had in my system. The 35- year tradition of excellence continues.


One aspect of the Levinson’s performance I did have a change of heart about over time was whether or not this amp was as “laid-back,” as my initial impressions indicated. After first listening with the Focus Master 3 loudspeaker, I paired the 436 with the B&W 800D. While it still didn’t have the fireworks of, say, a Krell amp, the presentation seemed more dependent on the recording than on any inherent characteristic of the amplifier. Another contributing factor could very well have been the more up-front nature of the B&W versus the Focus Master 3. Whatever the reasons, the match between the 436 and 800D seemed particularly good.


Listening to Aaron Neville’s rendition of the Sam Cooke classic “Respect Yourself,” from Bring it on Home…The Soul Classics, [Burgundy Records], the last thing you’d describe this amplifier as being is laid-back. The 436 can crank with the pros. Even at the highest volume levels my ears could tolerate, bass control was absolutely rock-solid. Images were locked in place as well, with no hint of congestion or smearing. The equally impressive midbass was punchy and robust, while vocals were as full-bodied and textured as I’ve heard from this artist. 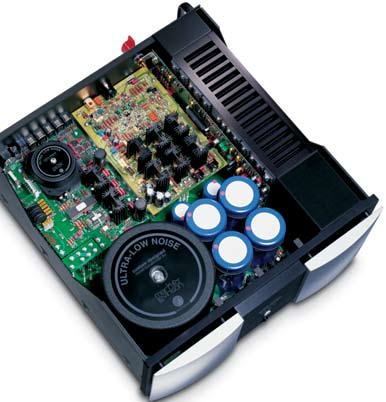 What I enjoyed most about working these amps hard was that I never felt assaulted afterwards. As contrary as it may sound, there was an overwhelming sense of effortless power that was invigorating yet relaxing at the same time. And I loved the precise definition, tight control, and authoritative dynamic punch in the deep bass as well as the midbass. The 436 seemed to make music “pop” from the loudspeakers. And when you’re talking about making a speaker like the B&W 800D “pop,” that is one special treat, indeed.


Shifting gears a bit, Aaron Neville was certainly fun, but it was Keith Jarrett’s The Carnegie Hall Concert [ECM] that impressed me the most, revealing the true finesse and sophistication of the 436 and its abilities to adeptly draw the listener into the music. Three-dimensionality was sensational. The wall-to-wall spaciousness was infused with a wealth of rich detail that didn’t seem to have a beginning or end, along with images as beautifully sculpted and layered as I’ve heard. Listening to track three, separation was superb; each key-strike of the piano was clear and distinct, effortlessly flowing as if on wings across the space in front of me. The first time I listened to this recording with the Levinson amp, I’ll have to admit to backtracking the Meridian 808 CD player at least a half dozen (or more) times just to verify I wasn’t imagining what I was hearing. This is the closest I’ve felt to recreating the wholeness of a live performance in my listening room. Makes me wish I could have been at Carnegie Hall to actually witness the event.


As seductively and involvingly as the 436 rendered Latin guitarist Jesse Cook’s “Cancibn Triste” on Obsession: New Flamenco Romance [Narada], I never found this amplifier to be too polite. (In my view, excessive politeness can ofttimes equal boring.) Once again, three-dimensionality, resolution of detail, and separation were superb. I also found the violin to be especially natural with nice texture and tonal color. As amplifiers go, I’d give the 436 very high marks for musicality. And listening to old favorite Nickel Creek [Sugar Hill], I’m not ashamed to admit the vocals on “Out of the Woods” brought a tear to my eye. They were absolutely gorgeous—full, natural, and textured— the best I’ve heard on this recording. The robustness and definition of the midbass also deserve another mention, as they added a whole new dimension to the bass fiddle. The detail and pinpoint imaging of the string plucks were also the best I’ve heard on this disc.

It’s tough to find any fault with an amp like the Levinson. In a side-by-side with the McCormack DNA-500 I did find the high frequencies of the 436 to be just a tad soft. This explains my initial impression that the 436 leaned just a bit to the dark side. (Funny thing, though, after listening to this amplifier for just a day or two it doesn’t seem dark at all.) The McCormack actually performed surprisingly well against the 436 and is in my view a top contender at its price point. But the Levinson in pretty much every regard easily justifies its $5000 premium over the DNA-500.


For me, this hobby has always been about connecting to the music. As ruggedly built and aesthetically pleasing as the 436 may be, it would just be another cold hard piece of machinery full of parts without the emotional connection that it provides, and that I believe we all seek. The exceptional performance of this classic Levinson amplifier will surely impress, but it will be the masterful ability of the 436 to engage the listener that earns it a permanent home in your system. If I were a rich woman, I would buy this amplifier in a heartbeat. TAS