Marcus Miller: A Night in Monte-Carlo

A Night in Monte-Carlo 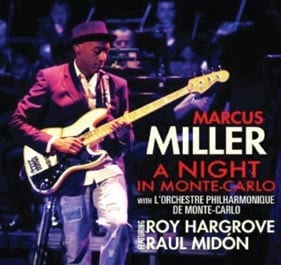 Bassist-composer-arranger-producer Marcus Miller reveals the full scope of his talents on this live outing recorded in 2008 on the French Riviera. Joined by the Monte-Carlo Philharmonic, turntablist DJ Logic, singer Raul Midon, and trumpeter Roy Hargrove, Miller presides over large-scale reinventions of his own compositions, jazz standards, operatic selections, and a gospel classic. His rendition of Miles Davis’ “So What” has a funk bounce, though swathed in lush strings and woodwinds. Logic’s skillful scratching adds a street texture to the mix while the bassist unleashes his monstrous slap chops on this timeless favorite. Miller’s pen, as well as with his singing fretless electric bass, is prominently featured on a singular realization of Gershwin’s “I Loves You Porgy,” and carries the melody from a Puccini opera that segues smoothly into the samba “Mas Que Nada.” Trumpeter Hargrove blows brilliantly on a stirring rendition of “Amandla,” Miller’s title track to Miles Davis’ 1989 album, then switches to a warm flugelhorn on “I’m Glad There Is You.” Miller’s second instrument, bass clarinet, stars on an inspired reading of “Amazing Grace” and on the lone studio track, a haunting take on Billie Holiday’s “Strange Fruit” with Herbie Hancock on piano.