I’ve abbreviated the names of these two components in the title of this review so that they wouldn’t occupy half the page. Their full names are a mouthful: Marantz PM-KI Ruby Ken Ishiwata Signature Reference Integrated Amplifier and Marantz SA-KI Ruby Ken Ishiwata Signature Super Audio CD Player with DAC. “KI” are Ken Ishiwata’s initials, the redundancy, I assume, because the full moniker might not survive a parsimonious copyeditor’s blue pencil. Ishiwata has been with the Marantz Corporation since 1978 and was its principal design auteur for most of that time. The first product to sport his initials and be designated a “signature” model—to my knowledge no one else in product development at Marantz (or any other Asian audio manufacturer?) has been given similar distinction—was, I believe, the CD-63 Mk II K.I. Signature, a tweaked out budget-level CD player marketed as a limited edition that got excellent reviews, sold out fast, and quickly acquired cult status (scarce to nonexistent on the used market, they are treasured by their owners, and at least one major audio reviewer retains it as a reference).

About ten years ago in anticipation of his third decade with the company, Ishiwata was given carte blanche to design an integrated amplifier and SACD player, the only “limitation” being a $3500–$4000 price point. Thus was born the KI Signature Pearl integrated amp and SACD/CD player, marketed in a limited edition and also the recipient of highly enthusiastic reviews. And now, to celebrate Ishiwata’s forty years (hence, ruby) with Marantz we have a new amp and SACD/CD pair again bearing the signature moniker and offered in a limited edition: two thousand units of each component in black or Marantz’s familiar champagne gold, early adopters privileged to have matching serial numbers. I am not sure what separates these units from the “reference” line of amps and SACD/CD players that have also appeared under Ishiwata’s aegis, including the similarly priced, non-signature Reference pair I reviewed six years ago. He has stated publicly that he is not the sole designer of Marantz products, rather, the head of a team that contributes considerably to the designs. But since he is well known for including long, patient, and detailed listening as an integral, indeed determinative part of product development, perhaps the signature models indicate a more personal involvement with less delegation at the various stages of any given project or simply a more subjective voicing of the sound, about which more anon. That might explain why these latest Signatures now sport Ishiwata’s actual signature laser-engraved on the top edge of the thick faceplate of each unit together with a red LED to symbolize the ruby. Ritz and glitz? No doubt, but inasmuch as Ishiwata is one of the rare Asian designers to have attained celebrity guru status—Marantz long ago gave him the formal title of “Brand Ambassador”—those who buy the KI Rubies will doubtless value the ornament.

I should point out that in the previous paragraph I put the word “limitation” in quotation marks because, unlike many of my reviewer brethren, I do not believe that expense necessarily, or even routinely, equates to good or superior design: experience, expertise, solid engineering, good judgment, and the like do. Except for the matter of overkill in the casework and other aspects of chassis materials and construction or a commitment to intrinsically more expensive technologies (e.g., getting high power out of vacuum tubes), there is no reason why a correctly designed amplifier in the four-grand range will not perform as well as or better than one of similar wattage costing multiples of that figure. With Ishiwata, however, “better” is a loaded word inasmuch as he believes passionately in voicing his components to sound a certain way that he freely admits is not strictly neutral but is musically beautiful, though without straying too far beyond the bounds of “acceptable neutrality” (my phrase, not his). His description of the sound of the 63 Signature (in a What Hi-Fi? interview from May 2019) could to varying degrees be applied to every product he’s had a strong hand in or at least to every one I’ve heard (including the four I’ve reviewed for TAS): “I knew it wasn’t a neutral sounding player, but it was so musical, you could enjoy listening to music forever with this player.”

Ishiwata’s favorite technology of any is analog tape, and he is known to love vinyl. A practical man, however, he realized early on that the future belongs to digital—he predicted streaming, using that very word, before anyone else in high-end audio I’m aware of even heard of the term—and built his initial reputation as a high-end auteur on the basis of the magic he could work with standard 16/44 (i.e., Red Book) CD playback. But given his preferences, it’s hardly a surprise that the digital technology he embraced and continues to embrace over all others is DSD. I have long familiarity with Ishiwata SACD players inasmuch as I’ve owned the modestly priced SA-8004 SACD/CD player ever since I reviewed it eight years ago (TAS 211), a highly musical, non-fatiguing player that “sacrifices a small amount of detail and absolute resolution for a presentation of great naturalness and musicality. It’s a player I never tire of listening to.” Two years later I reviewed Marantz’s Reference Series SA-11S3 SACD/CD player (together with the PM-11S3 integrated amplifier) and I judged it quite the best reproduction of SACD I had ever had in house, representing a real improvement over the SA-8004, notably in detail, neutrality, and overall authority, while retaining the wonderful musicality for which Ishiwata’s digital components are renowned. I’ll anticipate my conclusions to the extent that I find the KI Ruby at least as good, probably better, one reason perhaps being that Ishiwata is so committed to DSD that the new player upsamples and converts all digital inputs regardless of format of origin to DSD before final conversion to analog. 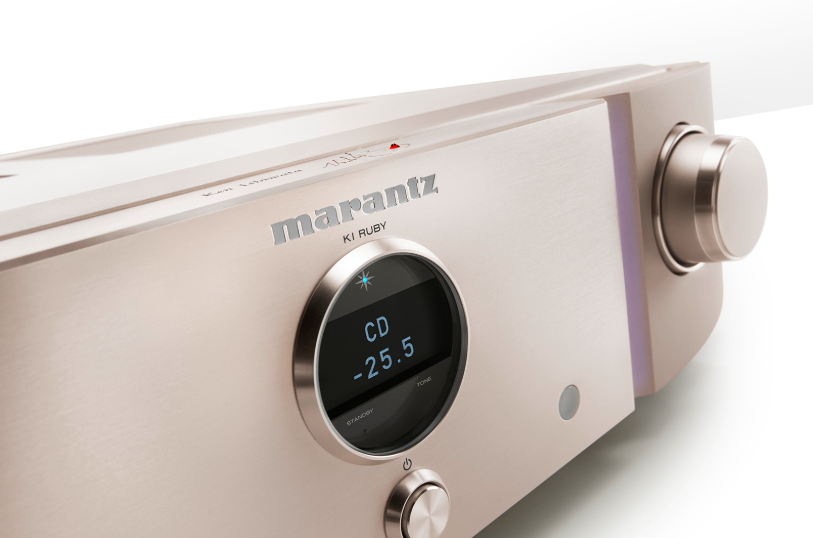 The word is that these new components have been designed from the ground up. Maybe so, but quite a bit of technology, circuitry, build, and features from the Reference Series seems to have found its way into the Rubies. Way back when Ishiwata modified the CD-63 he was paying attention to such matters as physical damping of chassis, shielding of circuits, and feet that filter or otherwise isolate from external vibration. This may account for the unusual degree of perceived cleanliness, clarity, and velvety black backgrounds in evidence (I regret the velvet cliché, but it is the metaphor that popped immediately into mind during the first listening session). I am going to forego the usual technical descriptions, as that would involve essentially summarizing the very detailed descriptions on the Marantz website. Suffice it to say, there is a great deal of careful, original, sophisticated, inventive, and even innovative thinking here, like, to name just a few items, the liberal use of use of copper and copper plating in the chasses and jacks, a proprietary transport for the SACD/CD player, a Hypex NCore switching amplifier module, a proprietary phonostage with a JFET that eliminates the need for a “coupling condenser,” and the aforementioned circuit that upsamples all PCM signals to DSD.