After complaining about the (un)availability of Magico’s superb, limited-edition, $129k M Project loudspeaker (see my review in Issue 255 or online at http://www.theabsolutesound.com/articles/magico-m-project-loudspeaker/), I am happy to report that Alon Wolf has done something to make things better. No, he hasn’t built more M Pros, but he has launched an entirely new line of loudspeakers based on the driver and enclosure innovations first seen in the Pro.

On a visit to the Bay Area in late August, I spent the better part of two days listening to my own vinyl (I brought some 20 LPs) and select digital files through the first offering in Magico’s new M Series lineup—the $75k M3 three-way, five-driver, sealed-box floorstander—and if this new speaker is representative of what’s in store for Magico fans, you’re going to want to give the M’s a long listen.

Wolf claims that the M3 is the most technologically sophisticated speaker he has made. In fact, he thinks it is his best work—but then he always thinks his newest babies are his best work. This time, however, he might be right.

The M Pro aside, the M3 certainly sounds different than previous Magicos in ways that are, to my ear, entirely for the better. Though neutral in balance and still blessed with the ultra-high transparency, speed, and resolution that are Magico hallmarks, the M3 has the same strong taste of natural timbral warmth and sweetness from the bass through the treble that I’ve grown used to with the Pro. However, it does something else that even the Pro doesn’t do to the same extent—the M3 pulls off a disappearing act that sets a new high for Magico multiways, and a soundstage of dimensions that set a new standard for me in all-dynamic floorstanders.

My jaw literally dropped when I listened to The Weavers at Carnegie Hall, a record that (God knows) I’ve heard heard a few times, as the seemingly vast reaches of Carnegie opened up behind the M3s with a width, depth, height, and volume unparalleled from a three-way cone loudspeaker. For once, Carnegie actually sounded like Carnegie. Venue, audience, musicians, and instruments were equally “there”—the hall huge and filled with joyous listeners sitting at various heights and depths, running from the orchestra level up to “glee club” in the top tier of old Carnegie’s wedding-cake layout, the timbres warm and natural, the transients with the genuine snap of gut-and-steel strings, and the individual voices and instruments imaged as clearly as if you were staring at them in a large-format photograph. This is the kind of densely populated, three-dimensionally immersive, wrap-around stage that I’ve only heard in the past with the MBL 101 X-treme Radialstrahler and the slim-line, quasi-line-source Raidho D5.1 (both of which cost a quarter-of-a-million dollars)—and I’m not sure either of those were quite this immersive.

Of course, Wolf’s custom-made, reflection-free listening room clearly had something to do with this extraordinary staging and imaging. And I’ll have to wait to get the M3s in my own reflection-filled listening room to see if I can duplicate the feat. (For the record, I can’t quite do it with my reference M Pro/JL Audio Gotham system, which costs considerably more than the M3, or even the M3 paired with QSub15s.) But a good deal of this standard-setting soundstaging has nothing to do with Magico’s bespoke digs and everything to do with the M3’s new enclosure, which is clearly the best the company has engineered.

Derived from the Pro (with an added fillip taken from the S Series and a new innovation in driver coupling), the M3’s box uses Magico’s traditional, massive, damped aluminum front, rear, and bottom panels—and its elaborate, bolted-together, aluminum latticework/substructure inside the cabinet—but adds curved carbon-fiber side panels à la the M Pro and a brand-new aluminum top cap (not found in the M Pro) that has a machined-in curve to it. The physical result is the most aerodynamic, diffraction-free enclosure Magico has yet come up with, and the sonic result is the standard-setting disappearing act and soundstaging I just reported on.

There is an additional benefit to Magico’s best-ever, lowest-diffraction enclosure that can be heard in the seamless blend between the tweeter and the midrange and the natural warmth of timbres (orchestral strings, such as those on the great RCA recording Rhapsodies with Stokowski and the RCA Symphony of the Air, are simply and breathtakingly gorgeous), though this may also be due to refinements in the driver complement. Indeed, while similar to the M Pro, the M3 uses somewhat more sophisticated drivers than the Pro—its three 7″ woofers, have later-gen graphene diaphragms (said to be 20% lighter and 300% stiffer than the nanotube-carbon cone material used in the Pro)—and a new and improved driver mounting system that employs a solid copper gasket to maximize coupling to the chassis and minimize the transference of resonances. The large 28mm diamond-coated beryllium tweeter (the same one used in Q7 Mk II) is also an improvement over the tweet in the M Pro. The other driver in the M3—the 6″ graphene-diaphragm midrange—is the same as that in the Pro, and Magico has included the same polymer sub-enclosure for the midrange found in the Pro (and derived from the S Series), which is said to enhance control and articulation, not that Magicos ever wanted for such things. 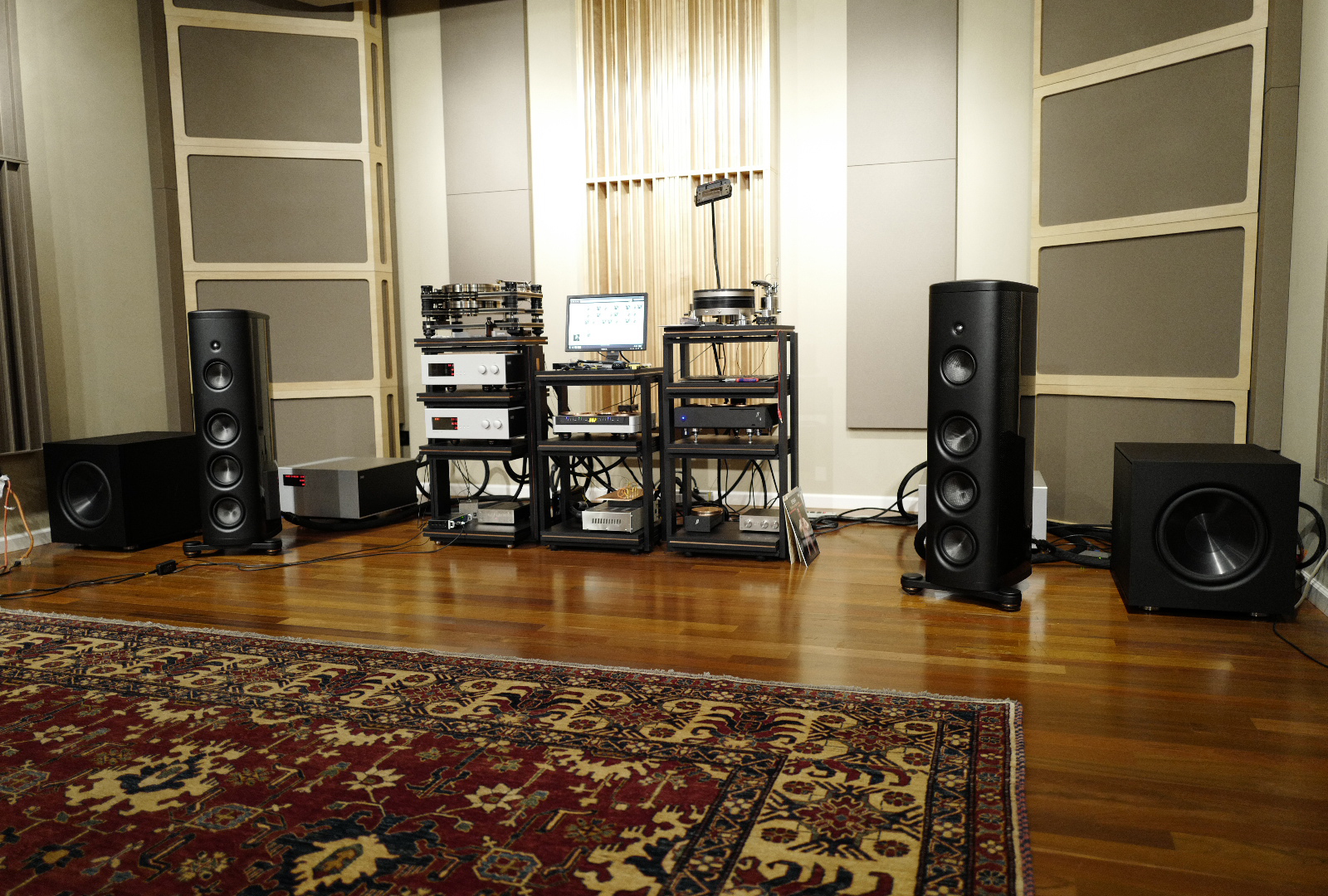 The fact that the M3 uses three 7″ woofers, rather than the three 10-inchers found in the M Pro, makes for a slight difference in power-range fullness and low-bass extension (the M3 is said to play on its own into the upper 30s) vis-à-vis the Pro, though the difference is surprisingly small and can be completely eliminated by adding a pair of $22k QSub 15s or $12k JL Audio Gothams to the package, crossed over around 45-55Hz. (For all sorts of reasons, I’m all in favor of using really good subwoofers, like the Magico Qs or the JL Audio Gothams, with full-range loudspeakers.) With the QSubs in and Soulution electronics driving the entire she-bang and TARA labs Zero & Omega Evolution SP audio cables hooking it all up, I would be hard pressed to say that I heard a substantial difference between the M3s and the M Pros on a powerful, deep-reaching pop cut like “I’m the Man to Be” from El Vy’s Return to the Moon. No, you don’t get all the midbass slam you may be used to from a ported loudspeaker, but you will still get goosebump-raising power, sub-20Hz extension, lifelike tone color unobscured by port resonance, and the peerless bass-range clarity of a sealed box.

All told, the M3 is the most exciting new product from Magico since the revolutionary M Pro, whose legacy it continues and, in many important ways, improves upon. For those of you hungering for the virtually un-obtainable Pro (only 50 pairs of which were built, most of them pre-sold), Wolf and Co. have finally provided an option that can be listened to and purchased. Whether you’re in the market for such an expensive item or not, this is a loudspeaker you need to hear—something wonderful made better. I will have a full report on the M3 when I receive review samples.

Frank Sinatra: A Voice on Air