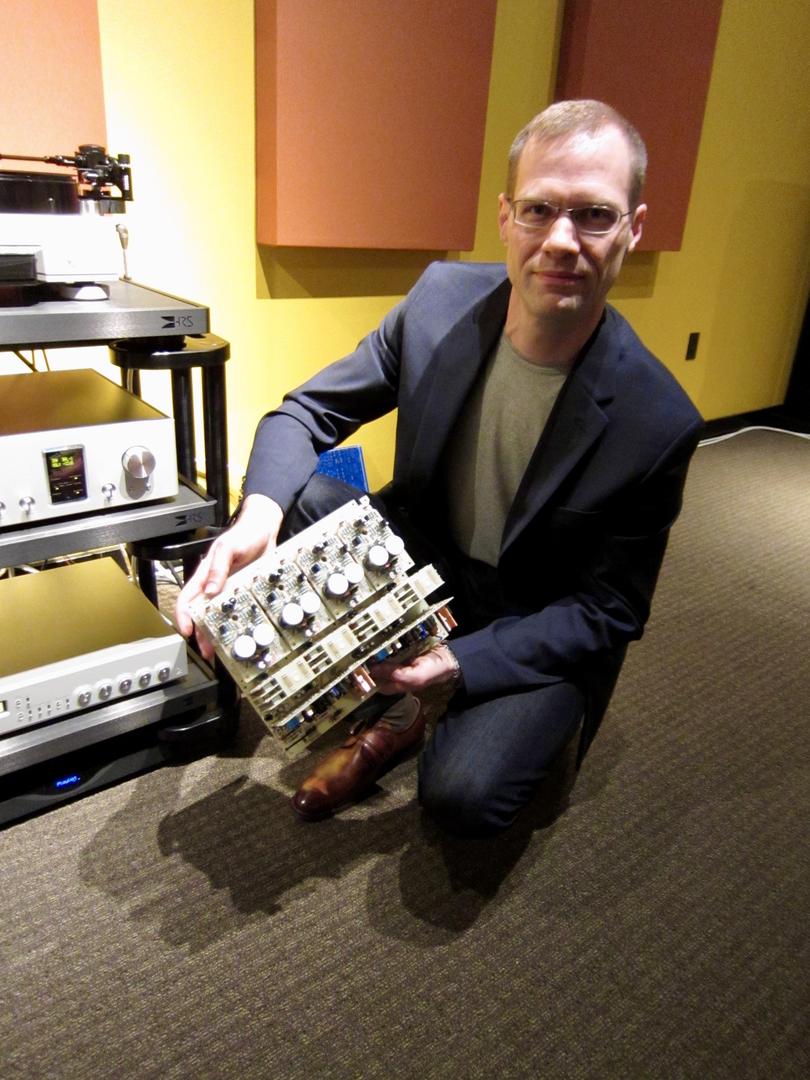 Jeff Sigmund, President of Luxman America, began with a brief discussion of the company’s long history in audio reproduction. I was surprised to learn that Luxman will be celebrating its 95th anniversary this year, and that 80% of the component parts used in its products are customized to Luxman’s specifications based on listening tests. Jeff then played Luxman’s elegant reference C-900u control amplifier and M-900u stereo power amplifier with top-of-the-line Dynaudio Confidence 60 loudspeakers in Pearl Audio’s primary demo room. The analog front end featured the new TechDAS Air Force V turntable with the remarkable Graham Phantom B44 Mk III tonearm. Cabling was Valhalla 2 Reference from Nordost. 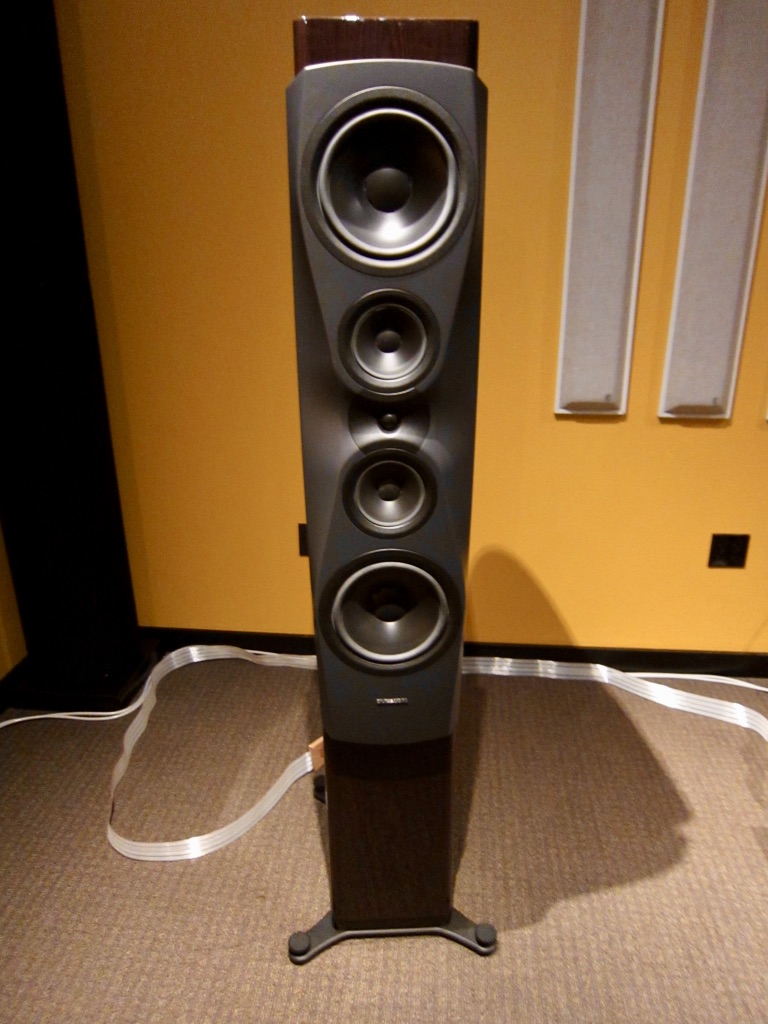 Besides its reference control and power amplifier, I was really taken by Luxman’s EQ-500 phonostage ($6495)—a vacuum-tube design with seven tubes, three inputs, a large-capacity transformer, and independent step-up transformers for moving-coil cartridges. (The EQ-500 also accommodates moving-magnet cartridges.) I particularly liked the front panel controls for easy adjustment of cartridge impedance and capacitance.

The overall sound of the system was glorious—quite natural, detailed, dynamic, and highly engaging with a very low noise floor. The sound was undoubtedly enhanced by the expert setup of the Pearl Audio staff: John Loranger, Russ Sherrell, and Connor Willemsen. System setup can make all the difference! I have never heard any reference Dynaudio speaker sound better, and the new Confidence 60 seems fairly priced in this highly competitive segment at $40,000/pair. It sports a single Esotar3 soft-dome tweeter flanked by twin 15cm midrange units and two 23cm woofers. Frequency response extends down to 29Hz, and I never thought the low end needed to be augmented with a subwoofer. 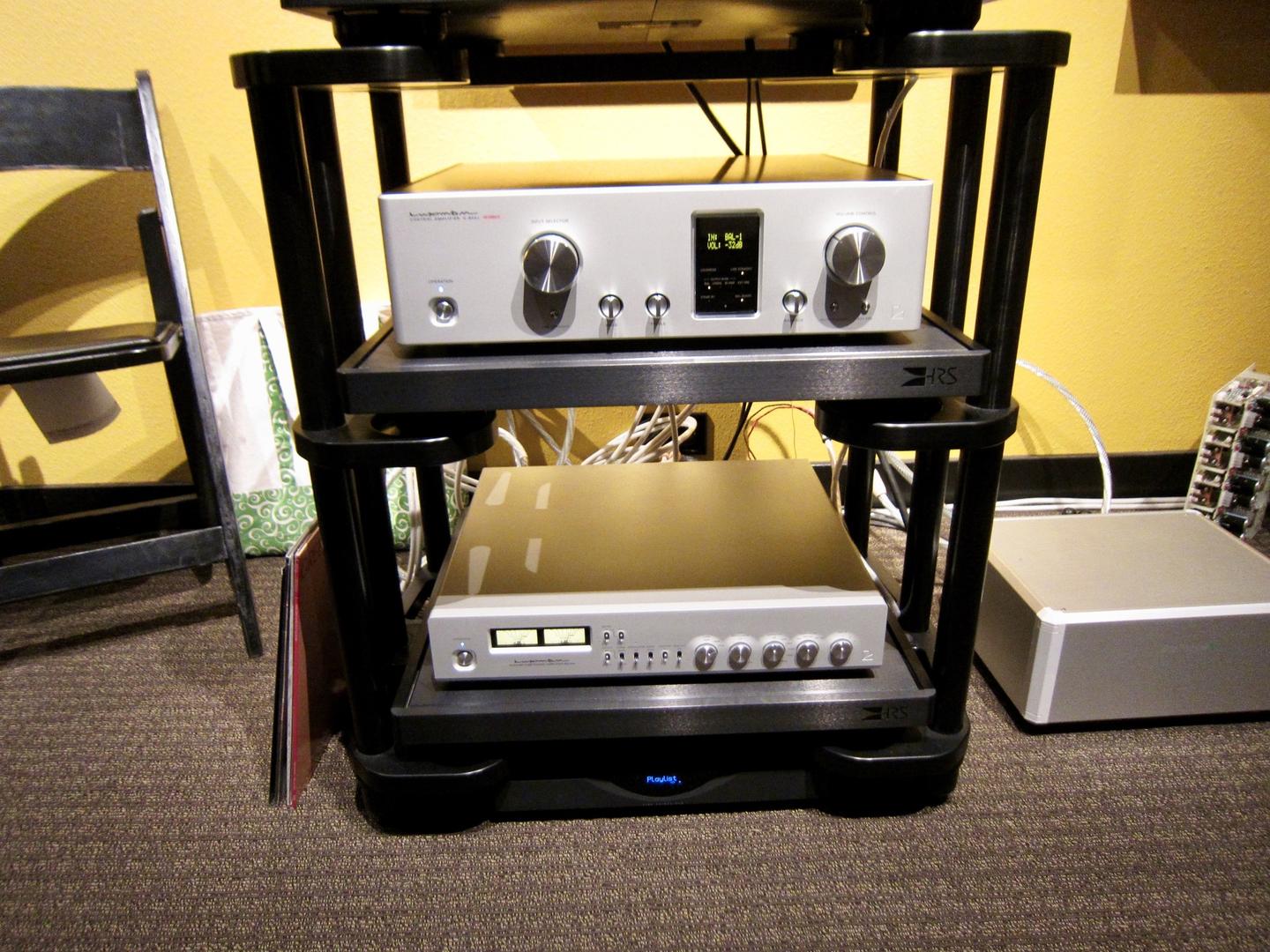 The “u” in the C-900u and M-900u names indicates that they are the ultimate products in the extensive Luxman line. This designation is well deserved based on my listening. Each unit is attractively priced at $14,995, and each rivals separates costing many times more. These products are fully balanced designs, without no phase combiners in their signal paths. For example, the four independent modules in the C-900u independently handle the hot and cold legs of the left and right audio signals. Luxman’s LECUA 1000 stepped, fixed-resistance attenuator is used for precise volume adjustment and may be controlled by either the front-panel dial or the remote. The M-900u stereo power amplifier produces 150Wpc into 8 ohms and may also be used as a monaural amplifier, quadrupling its power to 600W into 8 ohms. A single stereo unit was more than enough to produce startling dynamics with the new Dynaudio Confidence 60. Large analog meters not only enhance the unit’s looks but are also a lot of fun to see. 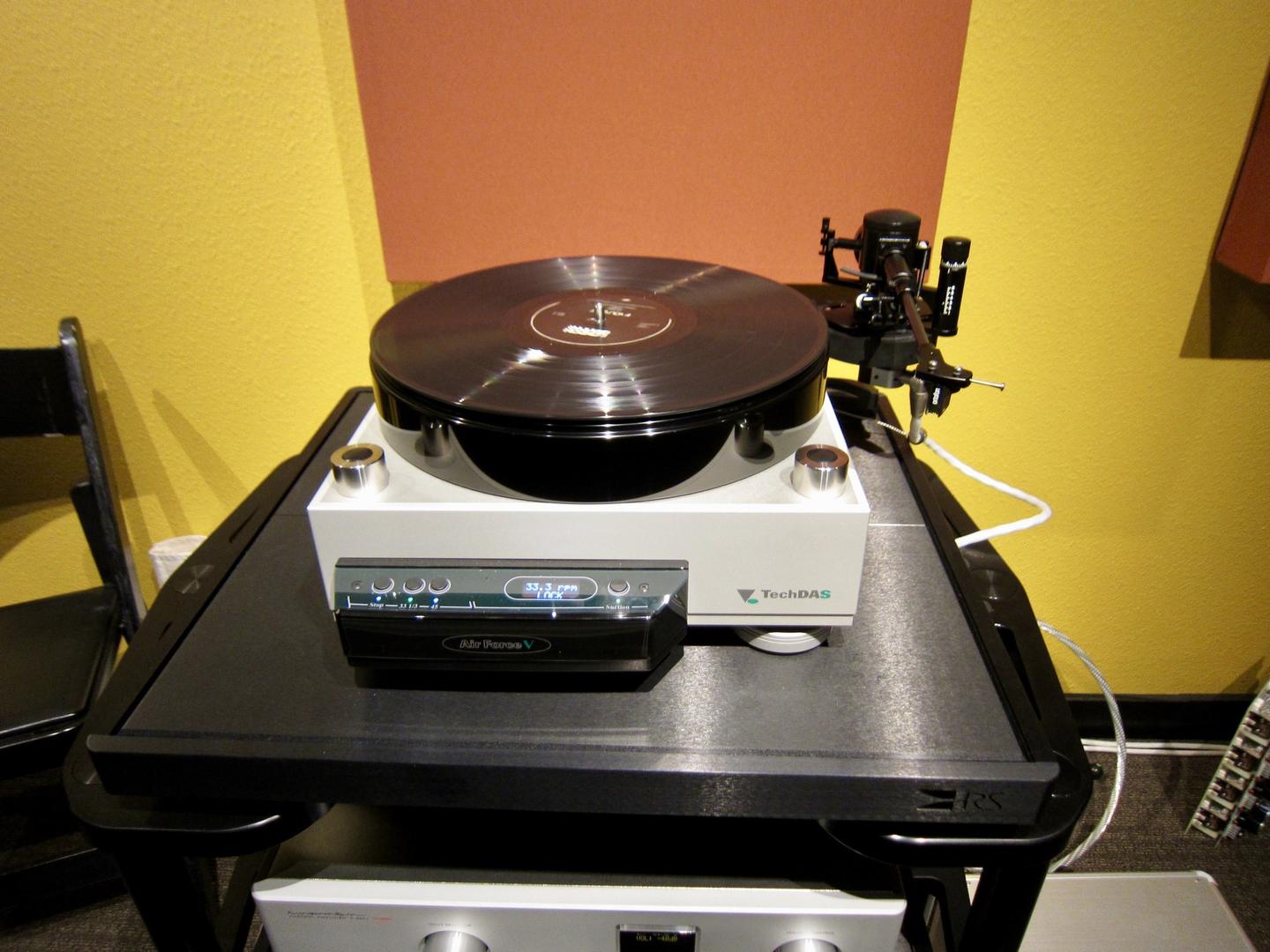 On London Grammar’s “Hey Now” from the Truth Is A Beautiful Thing album [Columbia] on the TechDAS Air Force V ($19,995) turntable, the female voice was very natural and smooth sounding; yet it was also very detailed and engaging across a wide and deep soundstage. Mounted in the Graham Phantom tonearm, the Ortofon Candenza Black moving-coil cartridge has never sounded better. Bass was both extended and controlled, giving a solid foundation to the music. Like the bigger TechDAS ’tables, the Air Force V features an air bearing and vacuum hold-down. It looks and sounds like a winner!

With the latest version of the Linn Klimax DSM with the Katalyst DAC as the digital front end, the system had great slam and detail, yet sounded natural without edge or stridency on female vocals. The demo concluded with a unique track: “Helvegen” by Wardruna from the album Runaljod—Yggdrasil. The sound was visceral—big, full, rich, and impactful, yet with great control and superior bass articulation and power. I could feel the air being moved against my chest! What a great track to end the demo, and demonstrate the range of these new Luxman separates and Dynaudio speakers! 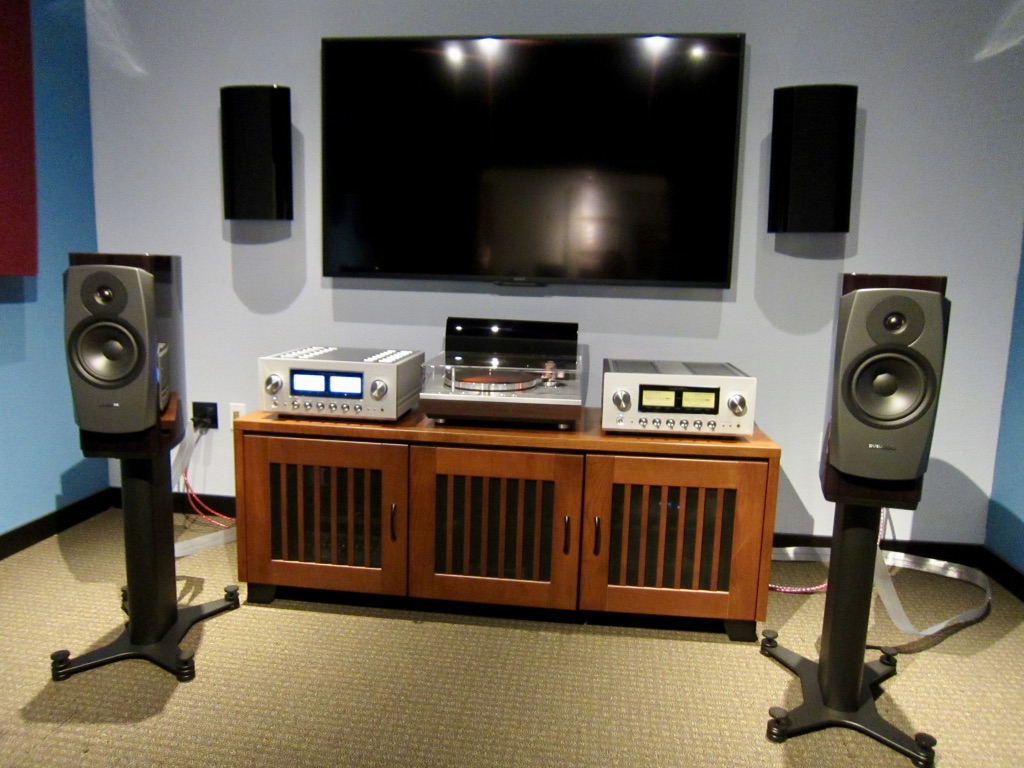 The smaller demo room at Pearl Audio featured the Luxman L-509X reference integrated amplifier ($9500), as well as the Luxman L-590AXII Class A integrated ($9000), powering Dynaudio Confidence 20 stand-mounted loudspeakers. Both integrated amplifiers feature LECUA technology (derived from the separates), very precise channel matching, a high-quality phono amplifier compatible with moving-coil and moving-magnet cartridges, and a headphone output. We switched between the L-509X and L-590AXII with a Luxman PD171A turntable as the source, and both sounded remarkably good. I preferred the added sweetness of the Class A L-590AXII, though the power and control of the L-509X (120Wpc into 8 ohms) also had great appeal. Both integrateds were natural and engaging on a variety of tracks and exhibited many of the attractive sonic characteristics of Luxman’s reference separates, albeit on a smaller scale.

I came away quite impressed by these new-generation Luxman components and Dynaudio loudspeakers. Seminars like this one at Pearl Audio are not to be missed by those interested in high-performance audio. There’s an opportunity for critical listening, learning, and mingling with local enthusiasts. If you can catch the Luxman tour in your area, check it out!