How do you organize and store your music? Physical media, I mean. Like many audiophile LP collectors, I have at times struggled with keeping my ever-expanding collection under control. I’m not planning to stop acquiring new vinyl, so my need to better organize it is likewise growing. Enter Koeppel Design, a small, crafty, San Francisco-based company launched in 2013 that has carved out a niche for itself designing and manufacturing high-quality organizational solutions for collectors of music and other media.

A longtime record collector herself, founder and visual designer Kate Koeppel (the “o” is silent)—who also runs her own graphic design practice—became frustrated by the lack of functional and elegant solutions for storing and displaying her LPs. The only such products she came across were nearly all poorly made, plastic, or ugly (or all three). So this prompted her to create her own organizational solutions perfectly suited to the experience of accessing, handling, and playing records—the analog ritual. 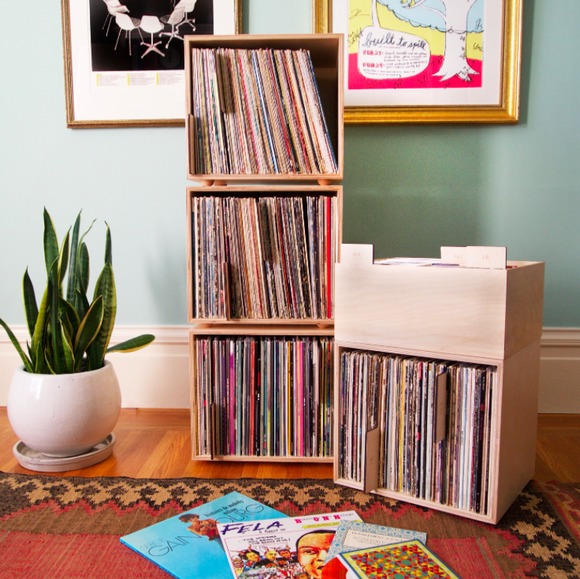 Koeppel Design’s offerings range from assorted record dividers with engraved or stenciled cut-out letters to stackable storage crates and a record tote bag. All dividers and crates are made of beautiful, high-grade, multi-ply European birch. The company of craftswomen works exclusively with California-based suppliers, printers, and other small businesses to produce its goods. Custom orders are also available for other kinds of storage/dividers for CDs, DVDs, 10-inch records, books, and so on. Koeppel can even create file cabinets or the storage setup of your dreams, and also is a supplier to a number of record stores, radio stations, and the Rock and Rock Hall of Fame + Museum Library and Archive.

Koeppel sent me a full alphabetical set of her wooden record dividers (in a vertical orientation, though they can also be had in a horizontal configuration), one for each letter, with offset tabs so all the letters are visible. Several options are available; it depends on how you prefer to organize your discs: partial alphabetical (A-F, G-L, etc.), by genre, by decade, or whatever else your little heart desires (see sidebar). (My audiophile father organizes his huge LP collection by record label, so he’d be a good candidate for a custom order of record dividers labeled Decca, Deutsche Grammophon, RCA, Philips, EMI, etc.) From the moment the heavy boxes arrived, I knew the makers were serious about their craft, though they also have an irreverent sense of humor: A tagline on a sticker included in my shipment read: “We will help you get your sh*t together.” Even the paper packaging tape was Koeppel-designed, well made, and witty, with small line illustrations of tiny turntables, amplifiers, headphones, desk lamps, etc.

Though deceptively simple in design, the  dividers are beautifully made, and as attractive as they are sturdy—built to stand the test of time. And it must be said, for the asking prices, they should last and last. In addition to being organizational, they’re also functional: The dividers take some of the pressure off your records by distributing their weight among the wooden panels. No fear of splinters either—these babies are as smooth as a baby’s behind. I opted for the elegant simplicity of the engraved letters, but the stenciled cut-out letters are cool-looking too—reminiscent of vintage printing techniques. Placed horizontally, the dividers fit right into the shelves of my Ikea Kallax storage units where I keep most of my LPs. Of course, now I’m coveting Koeppel’s wooden record crates.

Another item from Koeppel I must mention is the record tote bag. Made of durable Japanese denim with soft yet sturdy navy cloth shoulder straps (just wide enough), a large front pocket, and another pocket inside, it’s functional and smartly designed. And it’s gender-neutral too. Another noteworthy and important feature is the smooth wooden rectangular “base”— made of the same wood as the dividers—that you place in the bottom of the bag for structure, so your LPs can rest easily. Priced at $109, the tote is not inexpensive, but a bag made with such painstaking construction and quality materials seems built to last. I took one with me to schlep records and paperwork around the Tokyo International Audio Show, and it worked so well that it doubled as my carry-on for the flights home. 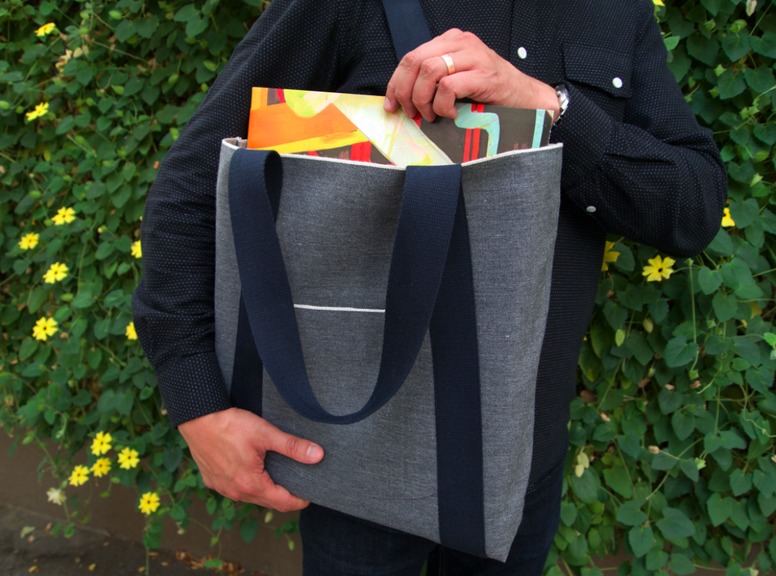 Audiophiles will certainly appreciate the careful craftsmanship and attention to detail behind the Koeppel products, but they are also functional. The dividers are built for the long haul, and to help your LPs last. Less handling means less wear and tear to the covers, ultimately helping to preserve your albums. And if time is money, the less time you spend hunting for, say, that direct-to-disc favorite, the more you’ll come out ahead. Perhaps best of all, you can forget about rickety plastic crates—unless you’re out digging for more vinyl.

Personal Collections
I asked Koeppel about the most unusual custom-order requests she’s had. Here’s her response: “At this point, nothing feels too unusual about how people like to organize their collections. I’ve found that a lot of (if not most) vinyl collectors are very particular and their individual systems of cataloging can be very specific to their own personal collections. Alphabetical by last name is the most common, but we’ve also helped clients organize by label, by decade, by sub-genre and artist, and of course, by BPM [beats per minute]. I’ve had a few clients who’ve abandoned their cataloging by album color, for instance—and switched to a different method thanks to record dividers.

“I’ve had a few people tell me they want help to organize their collections autobiographically—à la the movie High Fidelity—but so far, that hasn’t been realized quite yet! I’d love to help someone make that one happen with highly specific engraved panels for different periods of their lives—sections with exes names, or by emotions, or where they lived at the time for instance. Puberty might be fun to explore musically, and probably weirdly wonderful.” [And it’s often the time when certain music becomes indelibly impressed in one’s memory.—Julie Mullins.]

If you look through a list of the products that […]

The QR1 by Audiovector of Denmark is a two-way compact […]

Way back what feels like forever ago, when I was […]