Five hundred dollars doesn’t go far in the world of high-end audio. It will get you some high-performance cable, an entry-level moving-coil cartridge, or one Sonos music player. And if $500 doesn’t go that far, $50 gets you even less—maybe a couple new LPs or high-resolution downloads. But what if I told you that you could buy an Internet-savvy player for under $60 ($59 MSRP, $44.21 street) that can remake any analog receiver, preamp, or stereo system into a device capable of playing any Internet radio stream, most streaming music services, or almost any music file located on your network-attached storage device (NAS). Well, that is exactly what the Muzo Cobblestone can do. With both WiFi and Ethernet connectivity the Muzo offers “late adopters” a way to enjoy the latest in Internet music interoperability.

Technical Description
The digital heart of the Muzo Cobblestone is a Wolfson WM8918 DAC chip. While the original Cobblestone supported only up to 44.1kHz PCM files, the current version, A31, can play up to 96/24. Formats supported include MP3, WMA, ACC (ACC+), Apple lossless, FLAC, APE, WAV, and ALAC. The Cobblestone does not support the DSD format, or PCM files with resolutions above 96/24.

The Cobblestone does not have any digital outputs. The only output you will find is a 3.5mm single-ended mini-stereo analog connection located on its back. The Cobblestone’s other con-nections are an Ethernet LAN port and a mini-USB power connection.

The front/top of the Cobblestone has the only physical controls, which comprise three buttons—one for moving to the previous track, a second for play/pause, and the last to skip forward to the next track. All other controls for the Cobblestone can be found on the Muzo Cobblestone app for iOS and Android devices. This app offers a myriad of features, which I’ll discuss in the ergonomics section of the review.

Setup
Connecting the Muzo Cobblestone to a system is easy and relatively painless. You have two options, wired via the Ethernet connection or wireless via WiFi. For WiFi you need to use a system that supports the 2.4GHz band instead of the higher-speed 5GHz band. I chose a wired connection for most of my review, but I did try wireless to check ease of setup. The first step, after connecting and powering up the Cobblestone, is to install and then activate the Cobblestone app. After adding a device via the opening screen, you will need to supply your network password and, once that’s done, the Cobblestone will be connected to your network and will see network-connected devices such as your network-attached storage (NAS). The only tricky part of the initial Cobblestone setup is that if you want to use a music library located on a NAS drive you will need to have a music server or music-sharing app such as Twonky running on your NAS. Both Synology and QNAP NAS drives come with Twonky already installed, merely waiting to be activated.

Setting up streaming services was also a snap—all that was needed was my username and password and Tidal was up and running. IHeart radio was the same—all that was required was password and username. Tunein radio was even easier to set up since it required no username or password. It took me less than five minutes to add my seven favorite stations via the app’s search function.

Once set up, the Cobblestone proved to be robust and reliable. Occasionally it would not find a musical selection on my NAS on the first try, but on the second try it always connected properly. Even sudden power outages had no negative or lingering effects.

Since the Cobblestone has only an analog output, it will connect to the rest of your system as if it were an analog source—any line-level analog input connection will do. Once it was connected, I turned the volume control setting on the Cobblestone app to full level and controlled the overall system output from my system’s volume settings instead of from the Cobblestone. You could also set up your system so the device controls the volume level if you wish.

Ergonomics
In the several months I’ve had a Cobblestone in one of my systems I have yet to discover any serious shortcomings in its operation. There are, however, several changes I would like to see in the next version of the control app. The first issue I had with the Cobblestone app is with its sleep function. I’m in the habit of putting on music in my bedroom as I fall asleep, and with the Sonos system when it’s time for the music to turn off it does so with a gentle fade-out. At the end of the allotted playing time the Muzo shuts off abruptly with no fade-out or warning. That should be fixed.

The second minor, but at times vexing, ergonomic issue was with the Cobblestone’s implementation of Tidal. Unlike the iOS and OS Tidal control apps, which allow you to display your music library in several different ways, the Cobblestone app has only one way to display “My Music” albums—alphabetically by album title. If you can’t remember the title, you will find it difficult to find a particular album. On my Mac, using the Tidal app, I can choose to have my albums displayed by “newest first” which I find far more user-friendly.

Near the end of the review period I acquired a second Cobblestone to see how the system would handle multiple units. Once more the app proved to be reliable and the setup was glitch-free. It immediately recognized the second Cobblestone and walked me through the install in less than two minutes. With two Cobblestones I had the option of using them independently or ganging them so they played the same source in sync with one another.

Robert Harley on the Cobblestone
The Cobblestone sounded almost too good to be true, so I asked for a sample to try myself. It was as easy to set up as Steven described; within minutes I was streaming music from Tidal to a Riva TurboX portable system. The Cobblestone is the perfect solution for listening to music in other rooms in your house, or if you want background music or Internet radio without turning on the main system.

But the Cobblestone solves a much bigger problem for many listeners like my neighbor. He dropped by one day and saw me selecting music from my iPad via the Aurender Conductor app. My neighbor was not familiar with streaming audio, and was astounded by my ability to instantly play any piece of music he named. He immediately wanted streaming music in his life, but had no idea how to go about getting it, or making it work with his existing home-theater receiver and speakers. The Cobblestone to the rescue. For $59 my neighbor could add a Cobblestone to his theater system for music in his living room, and for another $59 add streaming music to his outdoor patio system. As Steven said in his review “the Muzo offers ‘late adopters’ a way to enjoy the latest in Internet music interoperability.”

The Cobblestone is an amazingly simple, useful, and inexpensive device that expands the possibilities for enjoying music.

Sound
If you’re hoping to find out the Muzo Cobblestone produces the same level of sonic excellence as even a $2k digital hub/player, I’m sorry to disappoint you, but that isn’t the case. I will state, without equivocation, that the Cobblestone does sonically out-point the Sonos player’s analog output sound-quality-wise. Considering that the Cobblestone is 1/7th price of a Sonos Connect that is something.

The Cobblestone produces listenable, if not riveting, sound. Lateral focus is decent, but depth and dimensionality are lacking when compared with the Sony HAP-Z1ES network player ($1995). The Cobblestone’s overall harmonic balance is slightly dark, with forgiving highs and a warmish upper bass and lower midrange. Despite this forgiving harmonic balance the Cobblestone does not lack midrange detail or decipherability. Dynamics are fair, but lack contrast. 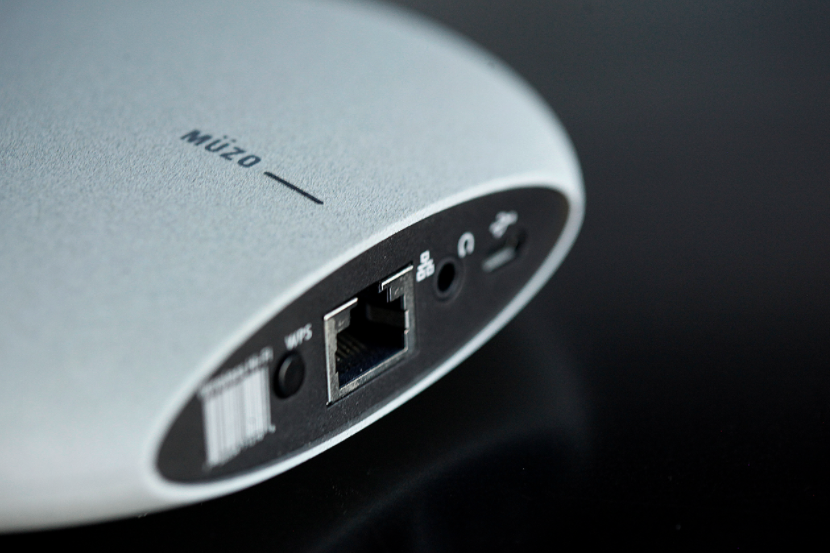 One area where the Cobblestone’s sonic performance was equal to a far more expensive player was in Internet radio. When I compared Cobblestone’s TuneIn Internet radio with the Sony HAP-Z1ES TuneIn radio, I could hear no difference between them on the two stations that I listen to the most—KGNU and KOTO.

Conclusion
Given its features and price, it would be unfair to consider the Cobblestone as a replacement for your current alpha-prime digital music source. But if you want to inexpensively add Internet radio and NAS playback capabilities to a system or if you require a source for a secondary “lifestyle” system, the Cobblestone would be ideal.

I replaced two Sonos units with Cobblestones during the course of the review. Now that the review is completed I see no reason to put the Sonos back in. The Muzo Cobblestone fills that Sonos niche with panache and leaves money in your pocket. Not too shabby for under $60.