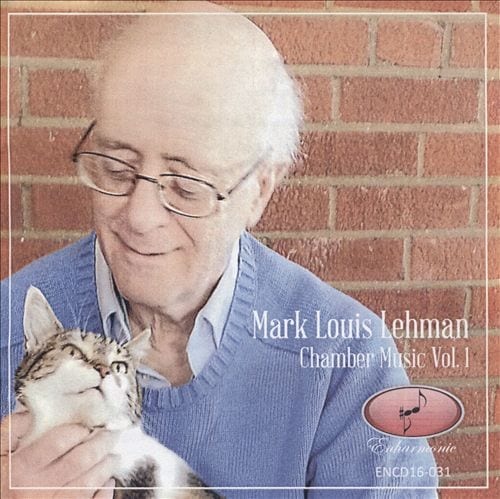 Mark Louis Lehman is one of us, and I mean that quite literally. Lehman has long been on the TAS masthead and was this magazine’s music editor from 2008 to 2014; as an audiophile, former college English professor, and an active composer, he was ideally suited for that role. Lehman’s compositional style is effectively described as neoclassical, and Chamber Music Vol. 1—all of Lehman’s music is for solo instruments or small ensembles; two more CDs are planned—holds seven works that will immediately appeal to those who enjoy this flavor of modernism. Although the composition dates for most of the pieces go back only a decade, this is misleading, as Lehman can labor over a composition for years before deeming it finished.

The four short movements of Hungarian Suite, for solo piano, clearly reference Bartók while Three Primitives (originally for clarinet and cello but here performed on piano) evokes the edgier, more ironic Stravinskian end of the neoclassical spectrum. “Missing-Link Tango,” the last of the Three Primitives, is “encumbered with an undanceable extra beat,” Lehman wryly observes in his liner notes. Much of the material on the disc channels the musical aesthetic of Paul Hindemith, but this isn’t facile imitation. Rather, Lehman’s short pieces—only one, Sonatina for Cello and Piano, has movements as long as five minutes—employ a fluent polytonality, a confident contrapuntal technique, and a gift for unsentimental but immediately engaging melody that breathe the same air as the German master’s music. The Sonatina in C for Piano actually uses a sequence of notes from Hindemith’s Mathis der Maler as the germ for its three movements. Lehman is capable of writing a disciplined sonata form (his Sonatina for Violin and Piano) as well as creating organically expressive fantasia-like pieces such as October Farewell, for solo cello, and Sleeping Cats, a series of  “elegiac reveries” for piano that fondly recall five of the composer’s departed feline companions. All the performances are committed and secure, especially those featuring the keyboard work of Angela Park, who participates in most of the program. The sound, courtesy of several engineers and studios, is immediate and involving.

On Notes from the Midwest (available through www.sowash.com), Lehman shares a chamber music program with a fellow Cincinnatian, Rick Sowash. Sowash, too, has admirable melodic instincts, though his music—on this disc, at least—lacks narrative distinction. Lehman is represented by four pieces, two of which duplicate material presented on the Enharmonic release. Christopher Koon’s reading of Hungarian Suite is capable, though less rhythmically pointed than Park’s. Three Primitives is offered here as a version for alto and baritone saxophones that plays up especially well the “oblique” and “dour” character (to use Lehman’s descriptive terms) of the three epigrammatic movements. Also on the CD is Tres Danzas Pequenas, a set of dances for flute and clarinet based on Caribbean forms, and Sephardim for violin and viola, a substantial work that uses 14th century Jewish melodies from Spain as the starting point for an engrossing grouping of wistful variations and fantasies. The audio quality of Notes from the Midwest is variable. The Sowash works have a somewhat distant sonic perspective; on the other hand, Sephardim, recorded in Jonathan Valin’s listening room, manifests an exceptionally natural tonal characterization of the two instruments.