At audio shows, anytime I’ve run into Michael Vamos, the president of Audio Skies and importer of Larsen loudspeakers, he seems to be in an exceptionally good mood. Maybe he’s on medication. Maybe he’s just been to the hotel bar. Maybe he’s just constitutionally happy. Or perhaps it’s because, unlike most of his fellow exhibitors, he’s had a relatively easy time setting up an audio system in the notoriously challenging acoustic environment of a hotel room. Like all of the Swedish company’s speakers, the Larsen 6.2 is designed to be placed against the wall the listener faces, directed straight ahead. Moreover, this means two often-vexing set-up variables have been eliminated: how far out into the room to situate the speaker, and the degree of toe-in needed. When a pair of 6.2s arrived for review this winter, I left the sofa that I listen from in its usual location and plunked the speakers down against the front wall where they looked right. In my 225-square-foot space, they were about 9′ apart center-to-center and 10′ from my ears. Tonal neutrality and imaging were exemplary from the get-go, and I didn’t fuss at all with the Larsens’ position for the entire review period. Easy peasy.

The Larsen 6.2, $3995 per pair, isn’t going to win any beauty contests. On the other hand, they don’t call attention to themselves, and the requirement that they be situated against a wall is likely to please a non-audiophile domestic partner. The 6.2’s footprint is only 9 ¼” x 10 ½” and the speaker is a mere 30″ tall when placed on the foam pads that the manufacturer provides to couple the Larsen to whatever sort of surface it rests on. The enclosure is fabricated from sturdy MDF and covered with a wood veneer—options include mahogany, cherry, maple, and white or black lacquer. In the high-end loudspeaker world, hernia-inducing mass is an attribute that, rightly or not, has come to garner respect. In this context, the Larsen 6.2 is almost comically lightweight at 30 pounds. Once, when switching amplifiers, I pulled too hard on the cable connected to one speaker and the little guy fell over.

The top portion of the 6.2 and other Larsen models is an odd-looking affair. The speaker’s two drivers are seated in an MDF baffle that tilts back and angles inward toward the listening position (as seen in the photo). Those two drivers, both sourced from Scan-Speak, are a 1″ low-mass textile soft-dome tweeter and a 7″ carbon fiber mid/woofer cone that’s coated with air-dried pulp. A semi-circle of felt surrounds both the tweeter and the empty real estate medial to the driver baffle, and on the horizontal shelf below it is fitted with triangular pieces of fabric-covered absorptive material. A grille cover of black fabric stretched over a metal frame is held in place by three pins; I left it on for listening. The backwave of the mid/woofer is conducted into the 22-liter box, which is vented to the rear. The 6.2’s crossover, characterized as combination second and third order, is built with large, air-wound copper coils, polypropylene SCR capacitors, and non-magnetic connectors. 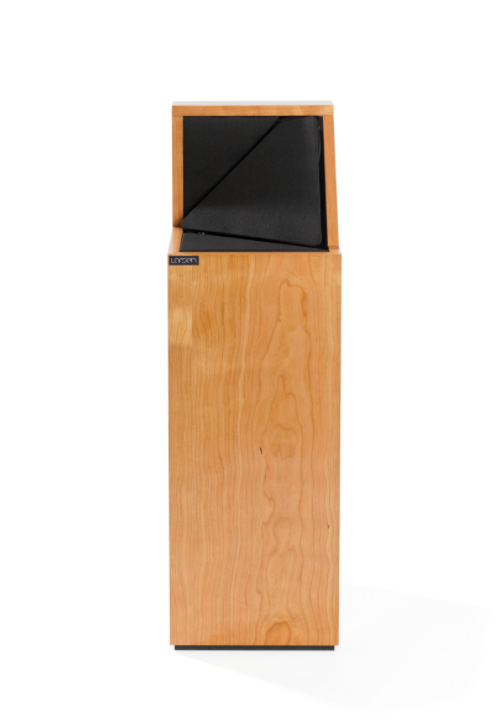 I began listening to the Larsen 6.2s with a pair of Pass Labs XA60.8 monoblocks and, as noted below, two more powerful amplifiers saw service as well. The rear panel of the Larsen sports two pairs of five-way binding posts, and I never refuse a chance to try bi-wiring. For most of my time with the Larsens, I employed a six-foot pair of the latest Anti-Cable bi-wires (at $200/pair, still among the most exceptional values in speaker cable out there) but also used my usual Transparent Generation 5 Ultras, with robust Transparent jumpers replacing Larsen’s standard jumper bars, one of which was missing from the well-travelled review pair of 6.2s. Source material was all digital: I played HD files with a Baetis Reference 2 media computer, either directly into my Anthem D2v pre/pro or via a T+A DAC 8 DSD, and polycarbonate discs using an Oppo BDP-93 as a transport.

For a characteristically cogent explanation of loudspeaker radiation patterns, room interactions, and the manner in which Larsen addresses these issues, I urge you to read Robert E. Greene’s review of the larger Larsen 8 in Issue 251 (available for your consideration, gratis, on the TAS website). The principles that inform the design of today’s Larsens were developed 50 years ago by Stig Carlsson and employed in Sonab loudspeakers; John Larsen worked closely with Carlsson for many years. In brief, unlike conventional speakers, the Larsen’s unique design allows the speakers to be placed against the front wall without creating early reflection from a driver’s backwave that can confuse the ear and register as distortion. Also, having the transducers facing inwards and upwards takes care of the first sidewall reflection. “The angle of the drivers ensures that the sound travels for the longest amount of time before hitting another surface,” Vamos explained. “You only have late reflections left, just like in a good concert hall.”

So that’s the theory. How does it work in practice?

It was immediately apparent that the Larsen 6.2s reproduced music with exceptional tonal accuracy and a high level of resolution. On the first score, singers always sounded like themselves and instrumental timbres were reproduced with all their complexity intact. After a few days of concentrated listening, I got around to the “Old Italian Violin Test” (see my review of the Magico S1 Mk II in Issue 270, or online, for details) in which one artist plays the first minute of the Sibelius D minor Concerto on 30 rare instruments, 15 made by Antonio Stradivari and one of his sons, and 15 by Giuseppe Guarneri del Gesù. With most good loudspeakers, even a listener with little experience in seventeenth-century Cremonese violins will come away from the exercise with the ability to distinguish a Strad from a del Gesù—the former’s brighter, more focused sonority vs. the latter’s darker, earthier tone. With the Larsen speakers, I was able to distinguish among instruments crafted by one of the two workshops. For example, the “Oliveira” Strad, created in 1692, was heard to possess a bigger and bolder sonority than the “Auer” Strad of 1690. It was possible to parse varied hues within one musical tone color.

In terms of resolution, I should stress that we’re not talking about hearing the kind of hyper-realistic musical minutiae that some speakers uncover but, rather, the subtle textural detail that one perceives in a hall, even when sitting fairly far from the performers. Via the Larsens, the ensemble string sound of the Mandelring Quartet playing Shostakovich’s disconsolate and terrifying Quartet No. 8 in C minor was utterly convincing. And with “Southern Cross” from the 1982 CSN album Daylight Again, it was evident that David Crosby wasn’t participating in the richly harmonized chorus on that selection—the inner vocal parts were handled by Art Garfunkel and Timothy B. Schmit, audibly so with the 6.2s.

Larsen’s promotional materials boast of  “deep and precise bass all the way down to 26Hz,” a claim I took with a grain of salt. True, the low-frequency output from a single 7″ woofer in a loudspeaker positioned against a room boundary should be greater than what would be expected from that same driver in an enclosure meant to be placed out in the room. However, with the Pass amps and Anti-Cable wires, acoustic bass lines with small jazz groups were muddy and uneven. Things did get better when the bi-wires were replaced by single-wire Transparent Ultra. But the improvement wasn’t nearly as consequential as that seen (or heard) with two other changes. 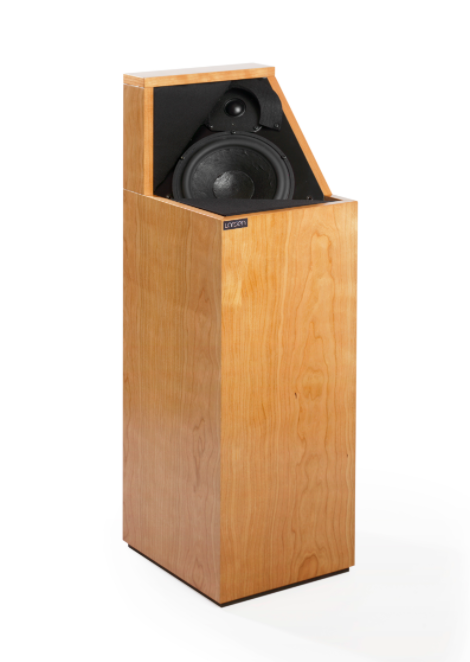 I felt it was important to drive the 6.2s with an amplifier priced more in line with the Larsens, and so I connected them to a $995 Parasound Halo A23. While there was some loss of tonal refinement and detail with the switch, the bass definitely improved. The Parasound puts out 200Wpc into 8 ohms as opposed to 60Wpc for the Passes. Clearly, these little speakers thrive on power; in fact, I later learned that John Larsen’s reference amplifier is a Gamut Di150 LE, which is rated at 180Wpc into 8 ohms. I then did something I wasn’t originally planning on doing—powering the 6.2s with my 200Wpc David Berning Quadrature Z monoblocks, an undeniably unlikely pairing as these amps cost roughly eight times the price of the speakers. The sonic result was amazing, including the bottom end. Bass and kick-drum had satisfying punch, and the organ in the Philadelphia Orchestra’s recording of the Saint-Saëns Symphony No. 3 on an Ondine SACD was majestically massive. Like many well-designed loudspeakers, the Larsen 6.2s will perform well with modestly priced amplification of high quality but also have the potential to sound even better with über-electronics.

The other opportunity to improve bass performance came when I ran a DSP room-correction calibration with the Anthem’s ARC software. Inspection of the frequency response curves revealed some irregularities from around 30 to 400Hz—a phenomenon I’ve noted with most loudspeakers I’ve measured in this fashion. Employing the calculated room correction helped to smooth out the bass response considerably, on paper and to my ears. The lesson is this: The up-against-the-wall placement of Larsen loudspeakers offers a definite advantage in terms of bass output compared to free-standing speakers in a typical domestic environment. But that doesn’t preclude room-related irregularities in bass response that may require attention with either physical acoustical treatments or electronic room correction.

For its size, the Larsen 6.2 is a definite overachiever when it comes to bass output and dynamics that won’t leave most listeners uninvolved—whether with late-Romantic symphonic repertoire or energetic pop and rock. If you’re going for realistic dB levels with Boris Godunov or Daft Punk, you’re going to be disappointed. For many, though, the 6.2s will effectively transmit the power and excitement of large-scale music of all sorts because of all the things it does so well. What we have in the Larsen 6.2 and other Larsen models is the full realization of a decades-long effort to understand the behavior of real rooms and to leverage those observations in the design of a loudspeaker that will play music with a minimum of coloration and distortion. If your loudspeaker budget is anything up to $5k, the Larsen 6.2 deserves a very, very long listen.