Have you wondered why only a handful of preamps from audio’s Golden Age, the decade spanning the mid-1950s to the 1960s, are coveted by audiophiles today? This is in stark contrast to tube power amps from the same era. (Judging from what sells on eBay, just about anything is deemed collectible these days.) A plausible explanation has to do with design complexity. The inclusion of rumble filters, bass, treble, and loudness controls and their attendant circuits seems to have been compulsory from a marketing standpoint, shifting the focus to feature-laden designs. I suppose that the generally mediocre sound quality of a phono front end at that time gave such controls a useful role in doctoring up the input signal. But as phono front ends improved dramatically in the late 70s and into the 80s, preamplifiers became purist in nature, eventually splitting along functional lines into line and phono preamps as digital sources became popular.

The LP2.1 represents a significant upgrade of the LP2, which was Lamm’s entry-level phonostage for many years. It is a prime example of what an audiophile phonostage should look like: audiophile-grade passive parts, dual-mono layout, single-ended Class A amplification with no global feedback, and a super-low- noise-and-hum power supply. The emphasis is entirely on signal purity and low-noise performance. Cosmetically, the chassis by Lamm’s own admission is “elegant yet self-effacing,” and fits in with its philosophy that “high-end audio equipment should be a means for contact with music, not an eye-catching piece of furniture.” Forget tone controls and any other bells and whistles. The only choice you have as a user is selection of either moving- coil (mc) or moving-magnet (mm) inputs via a switch on the back panel. A Jensen step-up transformer (SUT) with a turns ratio of about 1:10 is used ahead of the first mm gain stage to provide an additional 20dB of gain for mc cartridges. The overall mc gain is a factor of 1000 (60dB), which means that for ultra-low-output mc cartridges your line preamp would need to provide at most an additional 20dB of voltage gain. The 47k input impedance of the mm stage is reflected through the step- up transformer to the cartridge for a nominal value of about 430 ohms, a reasonable loading for most mc cartridges. Though to be honest, I’ve become spoiled by the flexibility afforded by my current phonostage reference, the Pass Labs XP-25, which provides gain selection and both resistive and capacitive loading choices right on the front panel.

Fifty years ago the 12AX7 dual-triode ruled as the universal choice for phono amplification. However, that began to change in the late 70s when the 6DJ8 frame-grid tube was introduced into audio practice. Phono gain stage designs based on high- transconductance tubes have since become rather popular as a means of reducing noise and optimizing reproduction of microdynamic detail. Needless to say, it’s the approach Vladimir Lamm has followed for many years. The tube complement of the LP2.1 has been upgraded to the Russian 6C3P and 6C45P-E triodes, the exact same tubes used in Lamm’s LP1 Signature phono preamp. The 6C3P is used for the first amplification stage. A passive precision RIAA network is sandwiched between the two gain stages giving an EQ error conservatively less than 0.5dB over the entire audible bandwidth. Phono overload margins are also exceptional at 25mV for mc and 250mV for mm. The new version includes new parts, a better PC board, and a low-noise power transformer. The output impedance has been lowered to 2.8k ohms in order to minimize the impact of long cable runs and line-preamp compatibility issues. Unusual for a modern tube preamp is the use of a tube rectifier (6X4). Vladimir Lamm, who is adept in both solid- state and tube design, opted for a tube rectifier despite the added costs relative to a silicon-diode bridge. It’s a decision I can only applaud, and it may well have been motivated by noise performance, as tube rectifiers generate less switching noise relative to most silicon-diode rectifiers. But in my experience, tube rectification has also proven to be sonically beneficial for preamps and other low-power Class A circuits by reinforcing vacuum tube virtues—in particular, nudging designs closer to reproducing the tonal colors of the real thing. That’s the crux of the matter, and while this observation is purely anecdotal in nature, I can tell you that I sleep better at night knowing that my tube preamp has been detoxed of silicon rectifiers. The LP2.1 is available in two versions: standard and deluxe. The deluxe version offers increased power-supply capacitance, polystyrene bypass capacitors for all film types in the signal path, and a massive damping panel that adds about 20 pounds, nearly doubling the weight of the standard version. Electronic protection circuitry mutes the output until the LP2.1 has stabilized after being turned on. It also provides for automatic muting of the output in the event AC line voltage drops or is interrupted, as well when the unit is turned off. Each preamplifier is hand-crafted and extensively tested. All units are said to undergo a final 72-hour burn-in period and are then re- tested and re-measured. The recommended break-in period is a minimum of 100 hours, and as Lamm notes the unit sounds its best after a minimum warm-up period of 45 minutes. An exceedingly quiet noise floor was a major plus throughout all of my listening sessions. It’s fair to say that every additional dB of noise reduction translates directly into a “dB” of clarity. As a result, the music swelled up from a velvety black background with no perceptible hash or grain. Nuances buried in the groove wall were unearthed with microscopic precision. 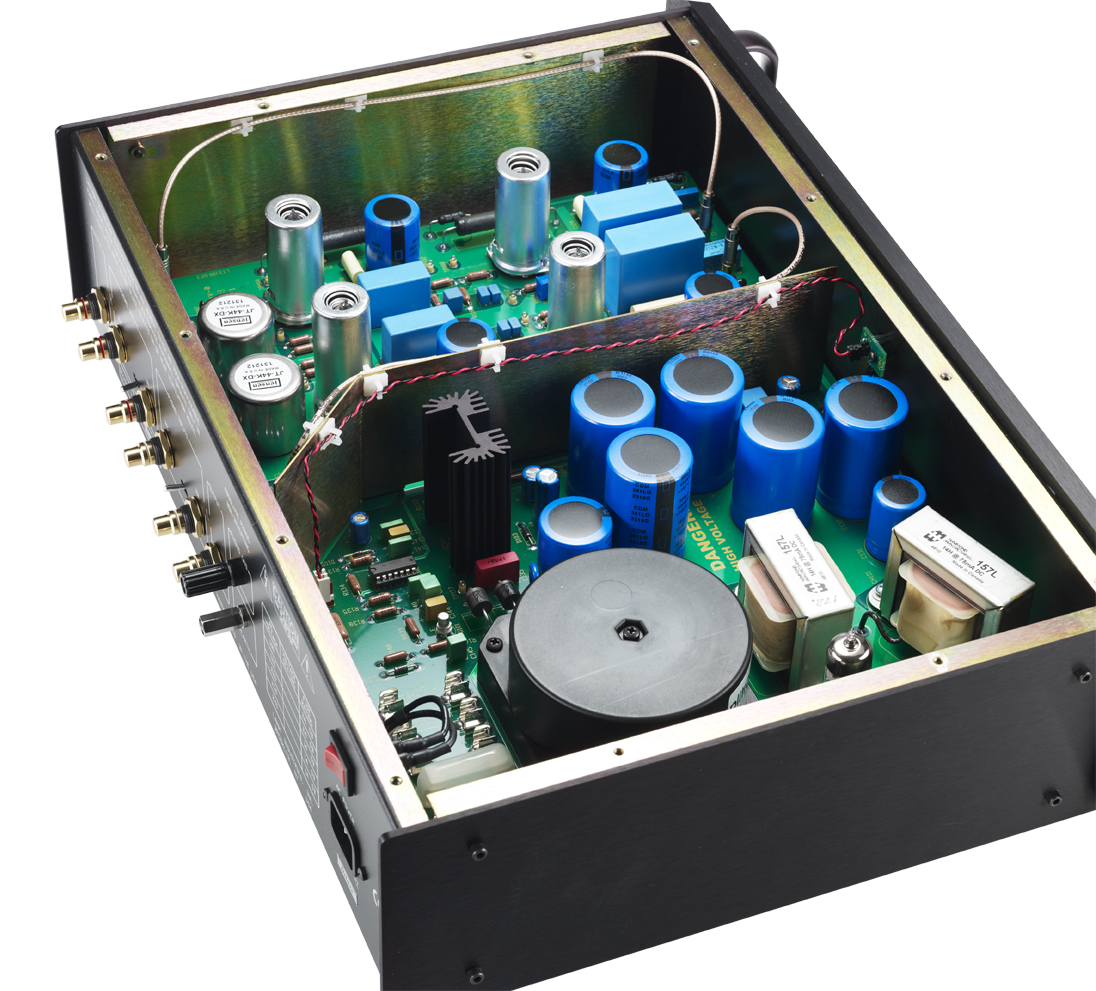 However, at no time did the presentation appear to be overly detailed or etched in nature—the sort of symptoms associated with an analytic character. All preamps have to walk a fine line between too little and too much detail. The LP2.1 was comfortably positioned in the Goldilocks zone. Detail was never in my face; instead it was framed organically within the fabric of the music. And while it’s not all about detail, keep in mind that the music’s emotional content is encoded into the analog signal by means of volume, pitch, and timing modulations. It’s the human voice that packs the most drama, and to experience its full emotional punch requires both a phono cartridge and a phonostage that can fully resolve a recording’s subtleties. The vibrancy and urgency of human voice were reproduced over the dynamic range from soft to moderately loud as well as I’ve experienced to date, including my current reference, and the LP2.1 did all that with no perceptible change in its intrinsic distortion spectrum. Some preamplifiers tend to sound brighter and harsher as they’re pushed harder. Not so with the LP2.1; it remained sweet sounding and composed under all signal- drive conditions. However, the Pass Labs XP-25 was superior in releasing a recording’s pent-up dynamic energy and scaling the dynamic range from loud to very loud. If there is a culprit responsible for constraining the extreme end of the dynamic scale, it may well be the Jensen SUT. I was able to bypass the Jensen by feeding the output of my Live! MC-10 SUT, which uses a Hashimoto transformer, into the LP2.1’s mm inputs. The net effect was to slightly improve both image focus and dynamics.

Bass lines were well defined, but the XP-25 again held the edge. In no way do I mean to imply that these differences define what the LP2.1 is all about. Its transient speed and soundstage transparency rivaled that of the XP-25, but its overall presentation was dramatically different. In contrast to the XP-25, which was a bit cool sounding, the LP2.1 facilitated the ebb and flow of musical textures with just the right touch of warmth and sweetness. Tonal colors were beautifully rendered. Yet, take note that this is not your typical tube preamp. There’s no excessive tube warmth, tube glare, or overly liquid textures. The tonal balance is very much on the neutral side of reality. Mate the LP2.1 with a neutral cartridge and expect the combo to speak the truth and nothing but the truth. Don’t shoot the messenger if you desire a romantic sonic character. If you’re inclined (like me) to slightly romanticize the sound, you’ll have to nudge the tonal character in that direction either via choice of cartridge or matching linestage and power amplifier. One area where there was no mistaking the LP2.1’s tube lineage was in its portrayal of a soundstage. Imagine breathtaking dimensionality and expansive depth perspective. Image focus was precise, and the preamp was able to track the head movements of a vocalist in front of a microphone and the apparent expansion of the image size with volume level.

Space is the final frontier and remains a challenge for two- channel audio relative to a multichannel system. And this is exactly why tube imaging continues to be relevant and why tube gear such as the Lamm LP2.1 reigns supreme. It is a unique product that offers a perfect marriage of traditional solid-state strengths such as bass power and low-noise with the glorious harmonic textures and the dynamic conviction of tubes. In my estimation, the LP2.1 phono preamplifier towers over the competition in the under-$10k price range.