Latecomers to specialty audio may be excused for not knowing that the Klipschorn was integral to the development of hi-fi in the 1940s and 1950s and represented a leap forward in home music playback in its day. Everyone else has probably heard or owned a Klipsch speaker. Before the Klipschorn (still in production since 1946), most people listened to their records through a variation of the Victrola. Paul W. Klipsch’s breakthrough “folded horn” speaker used the corners of the listening room as part of its horn-loading to greatly improve bass extension and dynamics. It could also generate high volume levels with only a few watts of power.

How does a horn work? When you cup your hands around your mouth as you try to shout to your friend across the street, your cupped hands act as an acoustic impedance-matching transformer that more efficiently couples your voice to the air. By placing a compression driver in the “throat” of a horn, the sound generated by the driver is similarly coupled to the air, resulting in a high sound-pressure level for relatively little amplifier power compared to conventional dynamic drivers. Important benefits accrue from relieving the amplifier of so much work, like lower distortion and greater dynamic range. The trick is to do this without making music sound like it’s coming from a megaphone. Too often, horn speakers tended to sound fairly colored, characterized by a yawning “aw” sound and, sometimes, a somewhat aggressive upper-frequency range that seems to beam at you. Some high-end speaker companies currently use horns with fantastic results: Avantgarde Acoustic and Acapella, for examples; even Magico—largely known for its sealed-enclosure, dynamic-driver models—uses horns in its $395,000 Ultimate II.

The $1200 RF-82 II is part of Klipsch’s updated, slim-cabinet Reference line that has both traditional mid/bass cone drivers—two coated anodized-aluminum cones (that Klipsch calls “Cerametallic”) and a titanium-diaphragm compression tweeter behind a 90° x 60° square horn (crossed over at 1400Hz).

The RF-82 II looks like a conventional 44” x 9.3” x 16.3” floorstanding speaker when its grille is concealing its rectangular horn. You do not immediately think “large, squarish, horn cabinet” like that of the traditional Klipsch or JBL or TAD. The review samples came in a cherry wood-grain vinyl wrap that looked attractive from the listening position. Overall, the RF-82’s appearance and build-quality struck me as higher than its $1200 price tag would normally suggest (no doubt partly achieved by manufacturing in China).

Amplifier connections are made via two pairs of binding posts for bi-wiring, although the speakers come with their own jumpers for single-wire hook-ups. Speaking of single-wiring, Klipsch recommends that you connect the positive speaker wire end to the upper speaker post and the negative end to the lower one (with the jumpers in place, or course)—which is what I did. True to Klipsch tradition, the RF82 II is a very easy speaker to drive. With a 98dB sensitivity and 8-ohm impedance, it ought to be. None of the amplifiers I had on hand had any trouble, even when playing very demanding recordings. I listened with the grilles off.

I was curious to hear what such a high-sensitivity speaker would bring to the equation, since I normally use a speaker that takes considerably more power to drive, the Dynaudio Confidence C1 (85dB, 4 ohms). While I have recently reviewed speakers that are a bit easier on amplifiers than the C1 and used a 93dB/12-ohm number some time ago, the RF-82 II still presented the most benign load of any speaker I’ve had in-house. Accordingly, I thought I would have to turn down the volume control a lot to compensate for the increase in efficiency. Clearly, the Hegel H100 (120W, Issue 206) and H200 (200W, review this Issue) integrateds as well as the Gamut M200 (200W) power amp were all loafing with most music material on the RF-82. (Even though the C1 theoretically requires about 15 times more power to drive than the RF-82, the volume control settings I used with the C1 vs. the RF-82were not nearly as different as I anticipated.) Although the RF-82 takes only a few watts to drive, I noted a marked improvement in control, dynamics, and a general sense of ease as I moved up the “amplifier power chain.” In theory, it shouldn’t matter. Nonetheless, the RF-82 benefited from more and cleaner power each time a more powerful, cleaner amplifier was used.

As I sat down with the RF-82 to listen to various familiar selections, I was struck by how much toe-in mattered to the overall sound. Klipsch recommends aiming the front baffles toward the listener. When toed in this way, the RF-82 sounded overly bright and forced. Fortunately, this is easily solved by simply decreasing or increasing toe-in, as required, for best sound in your setup. I ended up with the speakers firing nearly straight ahead with the speakers about 32” from the sidewalls, 65” from the backwall, and about 7′ 4” apart (measured tweeter-to-tweeter). Imaging, including centerfill, did not suffer at all when I did this. Overall resolution actually got better because midrange sounds were not overwhelmed by splashes of overbearing upper-frequency content. (I have fairly good sidewall-reflection damping materials in place, so typical comb-filter effects may be more controlled in my room than in an equivalent untreated room.) Upper frequencies blended better with the lower frequencies, and the music seemed to assemble into a more coherent whole with less toe-in. Lateral imaging was quite good, but depth could have been better. I heard venue depth with some recordings, but this was mostly through obvious delay or echo rather than the more explicit illusion of 3-D soundstage depth that higher-performing (and more costly) speakers recreate. 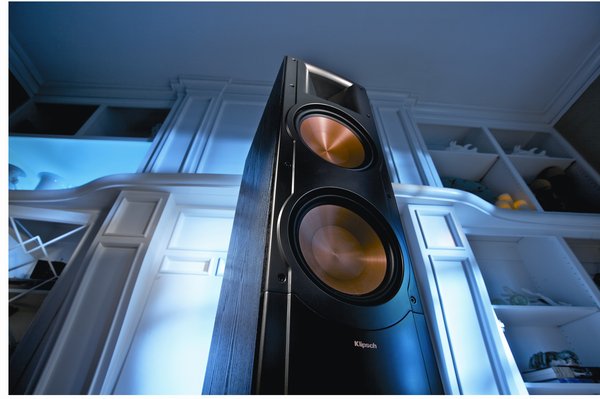 With optimal positioning established, the RF-82 II is a well-balanced speaker that does indeed have fantastic dynamic range, better than expected upper-frequency detail retrieval, and a rather full bass response. If you really crave that sensation of air being moved and of being swept up by the sheer physicality of large-scale music and don’t have some serious money for both speakers and amplification, the RF-82 would be a good place to start. The bass is not as deep or defined as it could be, but it is robust and lively enough to give a lot of music some welcome drive and momentum. Everything from Joni Mitchell’s “Turbulent Indigo” [Reprise] to Stravinsky’s Firebird Suite [Oue/Minnesota, RR] came through with that feeling of authority and foundation that helps bring gravitas to the listening experience. Thankfully, the RF-82 did not sound stilted in an obvious horn-like way—perhaps because frequencies below 1400Hz are mostly reproduced by conventional drivers. While I could never quite shake the impression that the parts of the music handled by the compression driver and horn were just a hair faster and better defined than those handled by the two mid/woofers, the resulting sound was still musically valid and rewarding—especially when one considers the Klipsch’s $1200 price and the wide variety of amplification options that such an easy-to-drive speaker allows.

While its strengths favor pop, rock, and soundtracks, the RF-82 II is not just a “play loud” act. Lara St. John’s recording of the stunningly beautiful Ciaccona movement of the Partita No. 2 in D minor [Bach Works for Violin Solo, Well Tempered Productions], for example, took on a soaring quality as she tore into the more exhilarating passages and made them just as passionate and raw—in the best sense—as great electric guitar solos from the likes of Jeff Beck, John McLaughlin, Steve Howe, and Carlos Santana. (Am I dating myself?) Does the RF-82 II approach the delicacy, refinement, and general resolution of more accomplished and more expensive speakers like the B&W 805 Diamond ($5000, Issue 210) or the Dynaudio Excite X32 ($2800, Issue 205)? No, but we are talking about a nearly-full-range, easy-to-drive $1200 speaker, here.

I enjoyed my time with the Klipsch RF-82 II speaker. It pairs up nicely with a wide range of amplifiers, and serves as a perfectly worthy entry point to those who are interested in a speaker that will get up and boogie with a variety of music. Klipsch is obviously alive and well.

I’ve been singing the praises of the Aesthetix Mimas ever […]