Kimber Kable is a touchstone company for me, and I suspect for many other veteran audiophiles. Kimber was there at the beginning of my high-end education. The distinctive braiding of models like 4TC/8TC or 4VS/8VS made them instantly recognizable throughout the industry. Their warm, ripe sonics were a balm for budget systems. In fact, as I see it, it might be easier to ask who hasn’t owned a set of Kimbers than who has. But that was then. Kimber’s new mid-priced Carbon series represents a serious twist on the old braid.

The Carbon speaker cables come in three variations, the Carbon 8, the Carbon 16, and the Carbon 18XL. Carbon 8 (13 AWG) is intended for desktop and small monitor-sized speakers. Carbon 16 (9 AWG) was designed with full-range floor-standing speakers and larger stand-mounted monitors in mind. The flagship of the series, the heavily jacketed Carbon 18XL (8 AWG), is engineered for high-current, wide-bandwidth applications. In construction, Kimber uses a classic braided geometry geared to optimize the reactance profile, but unique to the Carbon 18XL is a “central, non-twisted parallel straight run (shortest distance between two points) to minimize DCR (DC resistance) for wide bandwidth and optimal amplifier damping.” Carbon also features a low-loss fluorocarbon dielectric, VariStrand copper conductors, hand-soldered, nitrogen-assisted terminations with the always excellent WBT spades and bananas. The Carbon interconnect is available in a single configuration—an eight-wire, counter-opposed helix with RCA connectors. So, where does the carbon element figure in? A carbon polymer is literally extruded over the copper conductors, increasing conductivity. (Check out the sidebar for details.)

For this review I listened to Carbon 16 and 18XL and Carbon interconnects. Reference sources included the Lumin S1 network player, a dCS Puccini, and my Sota Cosmos Eclipse turntable. The superb Aesthetix Mimas integrated with phonostage and newly installed DAC board provided effortless power to my ATC SCM20SL loudspeakers. On occasion, dual REL T7i subwoofers were added. A quick listening note: I listen to all kinds of music from Fauré to Fogerty. However, when I want to hear what cables are really capable of doing, I need to go acoustic and get back to my purist roots as an audiophile. It’s all well and good to rock out with studio pop (I don’t mean to be sounding like I’m on my high horse here), but to take the fullest measure of any new component you must test it with the widest spectra of frequencies, timbres, and dynamics—in short, with acoustic music recorded in reverberant spaces. 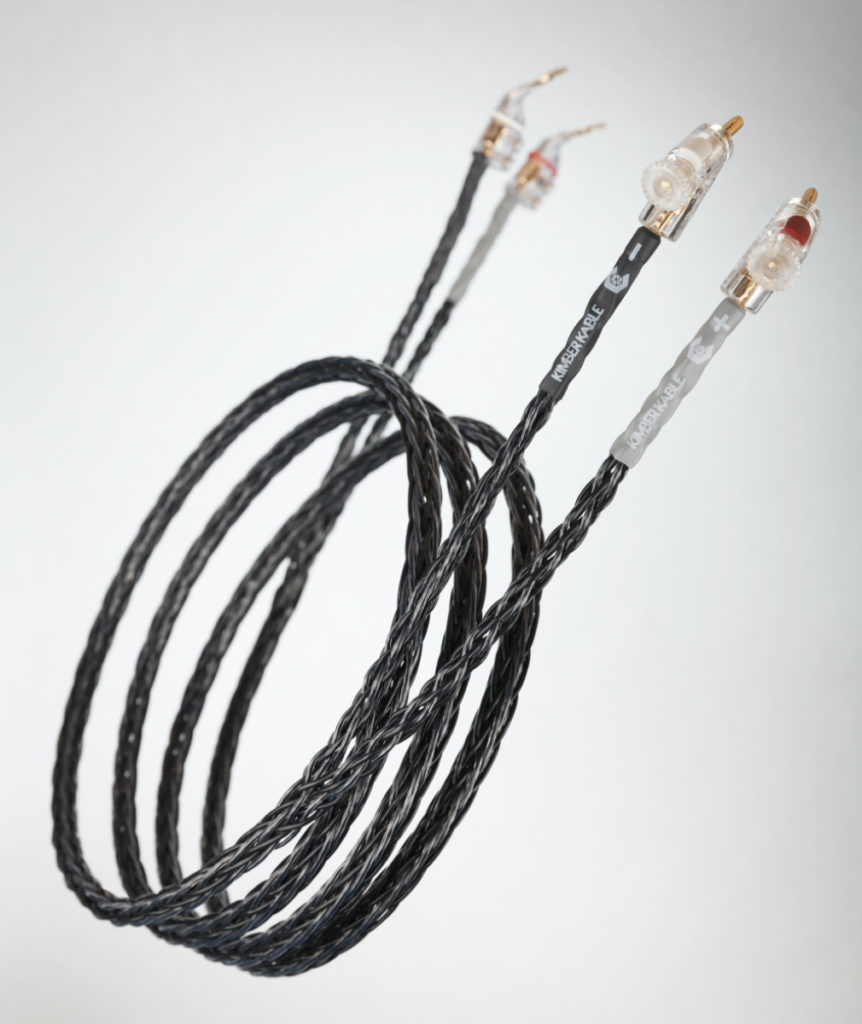 Sonically, Carbon 16 and 18XL had a clean, lively, bold midrange character—something I’ve come to expect from Kimber. Octave-to-octave tonal balance was smooth and natural. There were no out-of-left-field frequency bumps or dips; nor were the Kimbers laid-back or openly aggressive. Rather, they had a very slightly forward midband push—a sonic signature that flattered vocals in my system.

Carbon’s balance and midrange muscle couldn’t be better exemplified than on Patricia Barber’s recent SACD recording Clique! [Impex], particularly on the classic track “The In Crowd,” with a first verse featuring Barber’s vocal ensconced in a halo of reverb and accompanied only by some brilliant acoustic bass. This music perfectly illustrated the cable’s ability to capture the tuneful pitch, timbre, and resonances of artists and venues, including the slap of the tensioned strings of the stand-up bass. The neutrality of Carbon’s tonal balance was also on full display in the “Pie Jesu” of Rutter’s Requiem, where ominous organ pedal points flooded out like dark waters beneath Nancy Keith’s rich soprano voice (and the voices of the chorale), filling every corner of the Meyerson Symphony Center [Reference Recordings]. Equally impressive was the ability of Carbon to convey the vast acoustic of the Troy Savings Bank venue during Laurel Massé’s a capella performances on Feather & Bone.

As for the frequency extremes, bass response was nicely extended, combining pitch and impact in equal measure. Treble response was fairly open and extended, but in the case of Carbon 16 there were moments when orchestral strings grew a bit drier, losing some air and buoyancy. The sibilance range struck me as natural, conveying a proper mix of articulation and attack from a wide range of instruments, most notably the human voice.

Carbon’s key strength was its unshakable image stability—a centeredness to vocal and instrumental images that couldn’t be knocked off track. This quality first showed itself on Harry Connick’s “A Nightingale Sang in Berkeley Square,” where the saxophone and acoustic bass duet was projected centerstage right and centerstage left with just the proper weight and scale. Rather than being depicted as paper-thin cutouts, the sax and bass had a dimensional component, a physical presence, that suggested they were actually displacing the air in the room.

For me, no two instruments better illustrate how a cable is performing than piano and cello. Their voices are obviously very different, but each has an expansive range of expressiveness with lush sustain and decay. For example, Evgeny Kissin’s performance of Pictures at an Exhibition revealed rippling soundboard resonances, while upper-octave arpeggios sang with clarity and speed. Even more instructive was Yo-Yo Ma’s rendering of Bach’s six cello suites. The almost human voice that he summoned from his instrument ran the gamut of expression and intensity from a somber chesty male rumble to a soaring open-throated feminine alto. In all cases, Carbon elicited the resolution and transparency I’ve come to expect from the finer cables I’ve heard.

Which brings me to Carbon 18XL, the pinnacle of the Carbon series. Basically, everything the Carbon 16 did Carbon 18XL did just a little bit better and a little more convincingly. They were not carbon copies, so to speak, of one another. Carbon 18XL took the strengths of the Carbon 16 and further honed its performance. Most noticeable was the slightly warmer glow 18XL seemed to cast and the more vivid presentation of color and contrast. It had a relaxed, even character that never drew attention to itself with frequency histrionics or dynamic pyrotechnics. Percussion had more grip and mass. The top end was airier and more open. The sound became more immersive, the portrayal of images more substantive and palpable, and the system was more likely to vanish from the listening room. On a recording like Sheffield Lab’s direct-to-disc Classical Guitarist with Michael Newman, with the lights low and the volume turned just so I often had the unnerving feeling of listening to a musician in the room. The short answer? Carbon 18XL is in a different league.

These are not easy cables to find fault with, but if I were pressed I’d point to a couple small subtractions. Orchestral layering could be more specific, and the stage could extend farther to the back of the hall. There was also a slight tapering of top-octave air, and tiny hints of veiling around vocals and piano. And specific to the Carbon 16, the sensation of immersion and that eerie illusion of the musicians’ physical presence in the room, so notable with the Carbon 18XL, were slightly reduced.

Naturally, I couldn’t resist a “way-back machine” moment, so I hooked up my trusty 4VS (now part of Kimber’s Base Series) and listened in on one of my acoustic favorites, the Rutter Requiem. There’s a reason why these cables were and are so popular. Their rich smooth midrange and general tonal honesty are hard to beat. Nonetheless, in comparison to Carbon, the 4VS’s had a mildly subtractive sound, with a narrower soundstage, a bit less top-end air, and lighter and less well-defined bass. Transients were also not as quick.

That said, what struck me most was the consistency of the Kimber’s voicing. There was nothing embarrassing about the performance of these 20-year old cables, which show a closer kinship to Carbon 8 than you might expect. (And here’s a little unsolicited advice: Don’t ever get rid of that 20-year-old 4TC wire—you’ll regret it.) Overall, which Carbon did I prefer? If price isn’t an impediment, then it would be 18XL by a nose (okay a couple of noses).

You don’t need a crystal ball to see where this is going. If you still believe that wires don’t make a difference, then you’re in the wrong hobby, baby. Still, wire selection is also about managing expectations and budgets. No one I know builds a system around cables, but no one can afford to ignore them either. It’s all about fine-tuning—the process of mining, honing, and refining in order to recover that last bit of resolution and transparency. That’s what Kimber Carbon does so well. It only serves one master—the music itself.