JR Transrotor of Germany produces a vast array of analog playback components. They run the gamut from a stable of turntables—from noble to immodest—to motors, tonearms, and various and sundry accessories. For example, there’s the Tourbillon 07 turntable, a majestic, acrylic-and-aluminum construction with magnetic drive and three-motor/triple-tonearm capability. For those with epic aspirations and deep-water pocketbooks there is also the Artus, an intimidating $160k, five-hundred-plus pound masterpiece that in terms of sheer outlandish bravado calls to mind the similarly priced Clearaudio Statement. But in spite of these reality-bending designs JR Transrotor does not look askance at those of us who still have to work. The $5000 Dark Star turntable featured in this review is prime evidence of this.

The Dark Star may be more approachably down-to-earth but it doesn’t convey much of a sense of compromise. It’s an open-air, suspension-less design that’s belt-driven via an outboard fully decoupled AC-synchronous motor. The all-matte black surfaces give it a quintessentially stealthy look. The thick heavy platter rises above the plinth, which, in turn, is stabilized at three points by adjustable towers rising at the two front corners and a center-rear footer. At first glance the plinth appears mounted like a traditional four-poster but it’s a clever illusion. The motor tower and the tonearm mounting tower may appear to be supporting the table, but they aren’t weight-bearing—the former is attached to the plinth and elevated slightly to permit a tonearm cable to exit while the motor is actually free-standing. Power and speed stability are controlled via the Transrotor Konstant Studio. This outboard box is equipped with a robust power supply and is selectable for 33/45-rpm speeds. It uses a six-pin connector to drive and regulate the Dark Star’s motor/pulley assembly. Speed variations up to ±5% are adjustable via a pair of inset slotted screws in the front panel. A chunky record clamp is also included.

With no suspension—spring, oil, or air—to dampen footfalls or dissipate resonances the Dark Star (actually the entire Transrotor lineup) relies on mass and materials technology to address those issues. The chassis and the platter are constructed of POM—that’s polyoxymethylene for all the chemists out there. Most of us will be more familiar with its Dupont registered trademark name, Delrin. Known as “the world’s first acetal resin,” this substance combines many of the desirable properties of metal and plastics, including strength, rigidity, and resistance to impact, moisture, and temperature. Its damping abilities, notes Transrotor are similar to acrylic. To further the cause Transrotor applies its own anti-resonant tweaks to the underside of the platter, which boasts a unique series of clefts and channels. JR Transrotor describes its bearing as a “classic” bronze-sleeve design with a steel shaft and a ceramic ball-bearing. 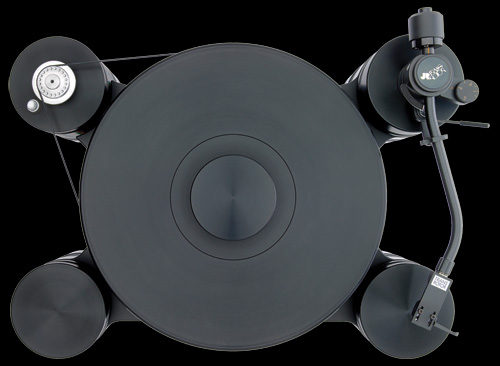 Setup is a paradigm of simplicity. Position the plinth and compensate for level using the adjustable front towers. The motor rests near but not in contact with the plinth in the curvature of the back left corner. The platter then slides onto the main bearing shaft and the drive belt, as thin as a whip of black licorice slips around the edge of the platter and around the pulley of the motor. All the leveling is handled via the front columnar corner struts. The Dark Star has mounting rings to accept Transrotor tonearms, as well as Jelco and SME arms. For many turntables, setup is an intimidating task, but the Dark Star really couldn’t be any easier.

Reduced to its bare essentials a turntable serves a dual purpose—it’s a staging area to accurately spin the record while providing a small island of real estate for a tonearm to track a record’s grooves. The rubber meets the road where the turntable is required to do those things in isolation from spurious airborne and mechanical resonances in order to allow a cartridge/tonearm to achieve its fullest expression. In rejection of physical vibrations—common taps or footfalls—the Dark Star scored high marks. Even with the preamp volume ramped up there was little-to-no noise or rumble registering from the chassis or out of the loudspeaker. And stylus tracking was relatively unaffected by all but the clumsiest movements in the table’s proximity.

The Dark Star is available as a stand-alone turntable or, for an additional five hundred dollars, JR Transrotor distributor Axiss Audio, offers its own Dark Star bundle. This includes the Jelco SA-750D tonearm and a Shelter 201 moving-magnet cartridge. The Jelco uses an S-shaped arm tube with oil damping; it’s highly adjustable and comes with a detachable headshell. If it looks a little familiar, it’s because Jelco is well known for the arms it produced for Pro-ject, Linn, Koetsu, and Audioquest. Most famous was the Sumiko MMT/FT series, which the SA-750D most resembles.

This is a sensible package for a couple reasons. First the Jelco is an easy-to-set-up tonearm. With a detachable headshell it is especially so for the novice. Purists may bristle that the arm lacks the superior rigidity of a one-piece arm tube, but the Jelco’s quick-release headshell offers not only the advantage of an easy installation when changing cartridges, but the possibility of buying a second headshell with another cartridge always at the ready—a mono perhaps. My one gripe with the Jelco was that it lacks damped cueing, meaning extra care should be applied when lowering the needle into the groove. The other reason to appreciate this bundle is that the Shelter 201 is high-output design (4mV), which will not force the buyer into purchasing a high-gain phono preamp. However, Arturo Manzano, who heads Axiss Audio, understands there are many avenues of upgrades available, and since I was already in possession of the JR Transrotor Phono II phono preamp (Issue 172) he supplied an Air Tight PC-3, a .55mV low output (low, but not that low) moving coil that emulates much of the innovation and performance of AT’s superb PC-1 (Issue 173).

As I put the Dark Star through its paces I found its sonics ran humorously counter to the heavy, ominous look it projects. There’s nothing sluggish about the Dark Star. It picks up transient cues instantly, as if it were anticipating the record groove before the stylus began tracking. And its low-level focus was resolute. In a word, the table loves pace. I heard it immediately from the distinctive drone of the dulcimer during Joni Mitchell’s “A Case of You” [Blue: Reprise/Rhino]. The sound of the plectrum sweeping across the strings and the slightly percussive, rattling attack were beautifully portrayed. It captured the sense of scale from the small-bodied instrument—its containment. Timbral distinctions were wide-ranging. The drums during “Far More Drums” on Time Further Out with the Dave Brubeck Quartet [Columbia/Impex] were not just heard as beats or pulses; they were more accurately conveyed as musical instruments each with their own voice and pitch and colorful personality. 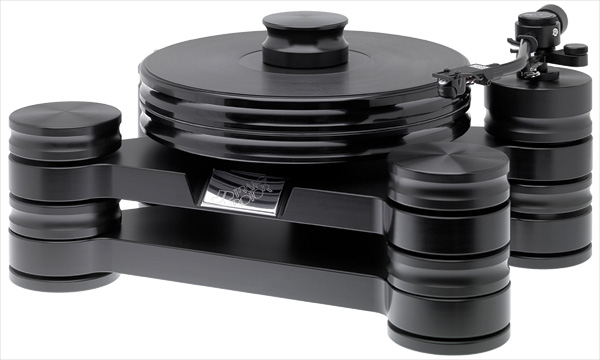 Well-executed turntables share an overriding and recognizable sonic trait—one that intuitively reminds me of why analog, for all its knotty inconveniences—sacrosanct rituals to many, I know—simply hasn’t been surpassed. It begins with the finer micro-dynamic gradations that yield up discrete details of space and time. It’s as if the sonic picture snaps into a listenable form sooner, the music’s contours and boundaries captured by the ear earlier in the event. And thus a sort of domino effect ensues. Images assemble and stake out a more coherent place on the soundstage rather than sloppily overlapping one another. It becomes apparent that one player is standing slightly in front of another and perhaps even slightly to one side. Analog seems to establish this continuing line of interlocking activity where one thing leads to another. I could hear this even on the most prosaic pop recordings. Kenny Loggin’s “Keep The Fire” from the eponymous album uses an early voice synthesizer called a Vocoder, which produces a robotic emulation of Loggins voice and was used to double his performance during the tune’s chorus. I’ve heard this “duet” sound congealed and defocused in some settings but the Dark Star rig restored a strict division between these images—the voices blending smoothly, but neither overpowering the other.

It also provides a world of insight into the studio machinations of the prog- rock band Yes and their blockbuster 90125 [Atco]. The sound is saturated with a bazillion tracks. I can imagine that whoever was manning the faders while mixing this disc must’ve had a steely set of nerves each time the tape rolled. Guitar cues, voice echoes, strange ambient shifts come whipping in and out of the deep, galactic blackness during a song like “It Can Happen” with the speed and sharpness of light momentarily glinting off the facets of a diamond.

Recorded piano makes demands on a playback system like no other single instrument, ruthlessly exposing limitations and strengths. Its range of dynamic and harmonic expression is huge and its ability to play single-note lines and dovetail those with complex chordal passages is evidence enough why the piano is known as the orchestra of instruments. In the hands of a talented player there’s little it cannot express. On the stellar Reference Recording of Nojima Plays Liszt, the Dark Star conveys the artist’s warp-speed arpeggios and left-handed dynamics with equanimity. Background noise is minimal and there’s hardly a moment when even the quietest individually struck notes sound less than pristine and harmonically enriched and sustained. If I have any criticism it’s that the soft bloom beneath the initial expression of the note seems slightly subsumed by the quick, prominent attack. The Dark Star adds a stark coolness and more arid dimension to the piano’s character—an element that I find less convincing.

In comparison to my own reference, an SME V-equipped Sota Cosmos, a suspension table equipped with vacuum hold-down, the differences were quite interesting. On balance, the Dark Star was a bit lighter and quicker in character, yet slightly less succinct and dynamic in the bass. The Sota is known for its ability to expound on the rich, resonant information of the lower octaves, and in this comparison its reputation was deserved. As I listened to the trombone/doublebass “Duetto” from Stravinsky’s Pulcinella [Argo], I had to recalibrate my expectations to reflect the greater weight and bloom that these instruments communicated.

The Dark Star makes an elegant package and is an operational and sonic delight. I have no trouble recommending the Dark Star without reservation. At the same time it’s also worth noting that options abound in the current analog renaissance, many of which compete head-to-head with the Dark Star. They represent differing philosophies and features but plainly illustrate the wide array of choices that put the discriminating audiophile in the driver’s seat like never before. In the market for LP playback? Don’t miss taking the Dark Star out for a spin.

The Best System I’ve Ever Heard in a Studio (or perhaps anywhere!)