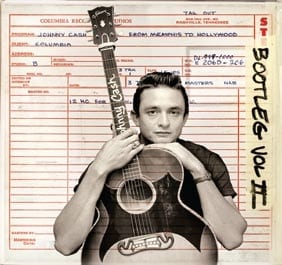 Not quite as stunning as the first volume of the Johnny Cash bootleg series (2006’s Personal File, 49 tracks of the Man in Black alone with his guitar and his memories), this second collection of Cash rarities still has much to recommend it, especially on the first, Sun-centric disc. Its first 15 minutes contain a complete 1955 KWEM (Memphis) radio show starring Cash and the Tennessee Two in all their youthful striving and humility, but the real find is twelve tracks of rare early demos of undetermined origin, featuring Cash solo acoustic in fairly polished renditions of songs that became classics—notably “I Walk the Line” and “Get Rhythm”—and some, such as “Rock and Roll Ruby,” that became hits for others. Disc two aggregates twenty-five 60s-vintage studio tracks heretofore unissued in the U.S. along with some familiar fare from that decade. The clean, remastered sound, especially on the 50s demos, makes the years fall away and delivers a young, vibrant Johnny en route to legendary status.