I’ve been a fan of JL Audio’s subwoofers since their debut at a CEDIA show about ten years ago. At that time this company, which had already redefined bass performance in high-end car audio, was making its first foray into the home-audio market. I went into the demo a skeptic: a car-stereo company introducing home-theater subwoofers? What could possibly go right? My trepidation was magnified when on the way into the demo room I was handed a pair of earplugs. I braced myself for a blast of rap at 110dB and chest-crushing, one-note bass. And then the demo began—with Bill Evans’ lilting Waltz For Debby.

JL’s Fathom f113—the product being demonstrated—didn’t sound like a subwoofer at all. Instead, it gently reinforced the bottom end, reproducing Scott LeFaro’s exquisite bass work with astonishing nuance and delicacy. The Fathom’s prodigious bone-shaking capabilities were demonstrated later on, but JL Audio had made its point about the company’s aesthetic and about the sub’s musical prowess. I ended up reviewing a pair of Fathom f113s, and found that they offered stunning performance in a stereo music system as well as in a serious home theater.

JL Audio recently introduced its much-lower-priced E-Sub line, the $1500 e110 (reviewed by Jonathan Valin in Issue 244) and the $1900 e112 reviewed here. The differences between the two units are driver size (10″ vs. 12″) and amplifier power (1200W vs. 1500W). The e112 includes an integral, fourth-order, line-level crossover (unlike the crossoverless Fathom), with controls on the top panel—a welcome change from difficult-to-reach rear-mounted controls. Once the adjustments are set, the knobs and switches disappear behind a magnetically attached cover. The whole package is very elegant.

The metal front baffle is essentially an extended mounting flange of the 12″ woofer, bolted to the MDF enclosure. JL Audio made its name by developing advanced proprietary woofer technologies (it holds 24 patents on raw-woofer design plus 12 more in enclosures, amplification, etc.), and those technologies have been distilled down into the e112’s woofer. The 12″ driver features a cast-aluminum frame, dual spiders, a large voice coil, and is capable of a whopping 3″ excursion. 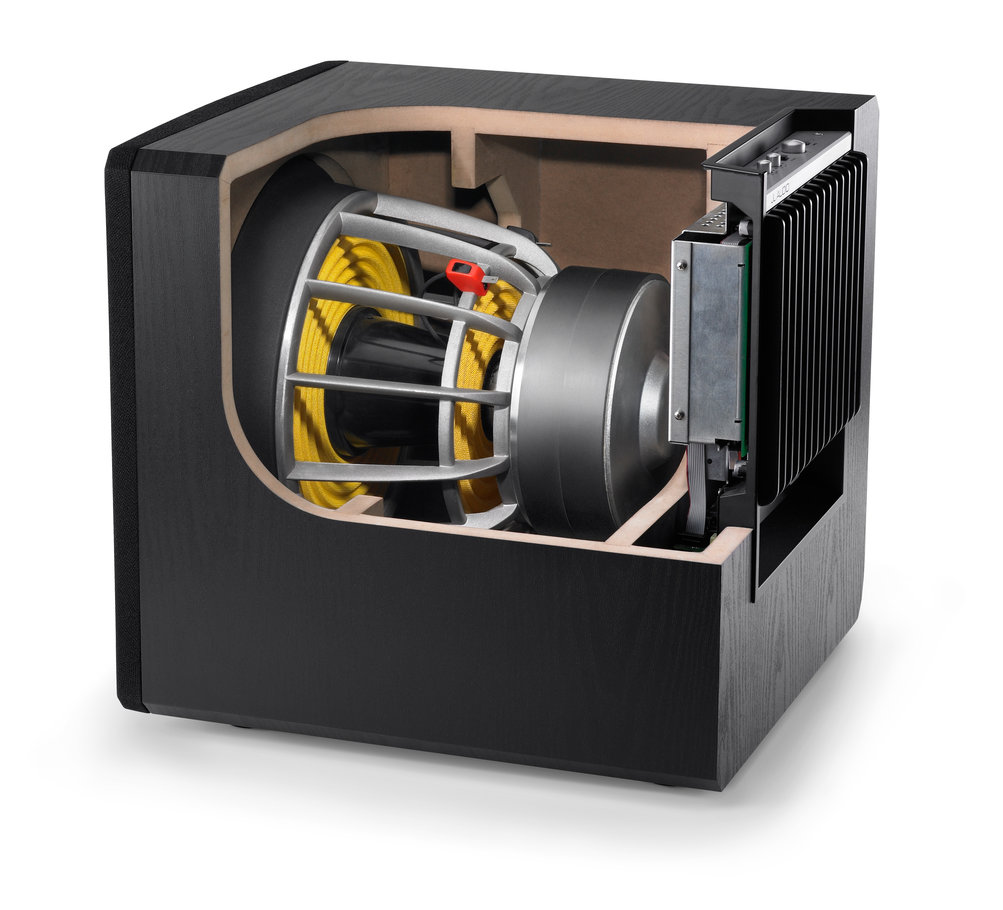 I wanted to hear a pair of e112s with the Raidho X-1, thinking that this combination could be a giant-killer, delivering JL’s bass performance with the Raidho’s spectacular midrange and treble. I had recently set up a pair of JL’s e110 subwoofers for a friend, mating them to the Joseph Audio Pearls. (He had bought both products on my recommendation.) The combination proved to be exceptional, with excellent integration between the two subwoofers and the Pearls.

The first thing I did after adding the e112s to my system was to evaluate the subwoofer’s crossover. I listened carefully for audible artifacts overlaying the midrange and treble with the e112’s crossover in the X-1’s signal path. If the JL sub introduced the kinds of distortions common to many crossovers, the system would be a non-starter. These distortions typically include added grain, treble hardness, a flattening of the soundstage, compression of dynamic contrasts, coloration of instrumental timbres, loss of fine detail, and a reduction in transparency. When you think about it, an active crossover should be designed and built to the same standards as a high-end preamp. Most are not.

The qualities that have made previous JL Audio’s subwoofers exceptional—lack of bloat and overhang, coupled with tremendous power and authority—were evident in the new, more affordable e112. The pair of e112s was quick and agile, reproducing transient information with no smearing of leading-edge attacks, plus very fast decays. As a result, the subs didn’t dilute pace and rhythm, as many subs do. Ray Brown’s bass playing, on everything from his Soular Energy, to Duke Ellington’s Duke’s Big 4, to Bill Evans’ Quintessence, was reproduced with its driving swing intact.

Kickdrum was startling in its impact and depth, and organ pedal points pressurized the room in the way that only subwoofers can. The e112 goes low, plays loudly, and does both at the same time without any sense of strain or compression of dynamic peaks. Adding the subs also made the soundstage bigger and more expansive (many spatial cues are carried by very low frequency information).

As you’ll read in the sidebar, filtering bass from the X-1s also conferred big gains in dynamic contrasts, midrange clarity, and the ability to play loudly without congestion in the midbass.

Finally, if you’re thinking of adding a subwoofer to your system, I highly recommend that you buy two or more. Two subwoofers drive the room more uniformly than one. Moreover, each subwoofer works only half as hard for a given sound-pressure level, increasing dynamic headroom and lowering distortion.

Conclusion
The JL Audio e112 seems to have sworn the Hippocratic Oath: First, do no harm. The e112 follows this dictum in two ways. First, its integral crossover is extremely clean and transparent. Second, this sub doesn’t call attention to itself by weighing down the music with a bloated rendering of the bottom end. These qualities alone would make the e112 a standout. But this subwoofer takes excellent performance up several notches, reproducing the dynamic, textural, and tonal nuances in acoustic or electric bass playing. Despite “light on its feet” agility, the e112 also delivers tremendous bottom-end authority. It’s this combination of finesse and impact that makes the e112 such a stand-out in a crowded field—and at an eminently affordable price.