Jimmy Scott: A Story About Hoping and Dreaming

A Story About Hoping and Dreaming 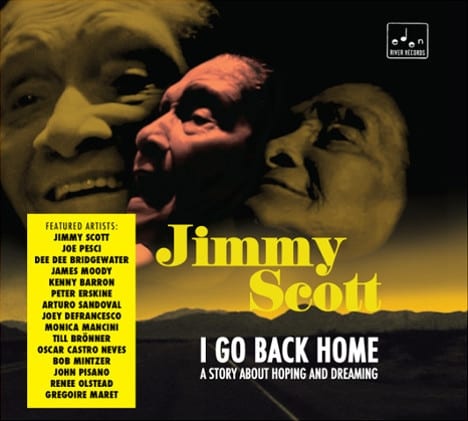 Time was rarely on singer Jimmy Scott’s side. He launched a promising career in the early 1950s but saw it go dormant in the 60s. He experienced a comeback in the early 90s but was on death’s door by the time he recorded these collaborations. And he died in 2014, before the release of the documentary I Go Back Home, which yielded these 12 stirring tracks. Scott was in failing health when producer Ralf Kemper paired him with Joey DeFrancesco, Kenny Barron, Oscar Castro-Neves, James Moody, Dee Dee Bridgewater, the HDR Studio Symphony Orchestra, and others. But frailty was something Scott transcended all his life to wrench almost unbearable emotions from just about any song. He somehow rose to the occasion ten times here (two performances are tributes by other singers), bringing fathomless vulnerability, wisdom, and beauty to lushly arranged versions of such staples as “Motherless Child,” “Someone to Watch Over Me,” “For Once in My Life,” and “Everybody Is Somebody’s Fool.” His idiosyncratic vibrato, note bending, and beat dragging may not be to everyone’s taste, but open your ears the way he opened his heart, and Scott will own you like he does these songs.