Insider with Robert Harley — The Six Rules of Loudspeaker Placement: 1-2

Rule #1: The listener and loudspeakers should form a triangle; without this basic setup, you’ll never hear good soundstaging and imaging. 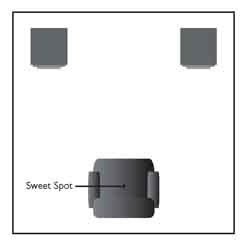 Fig. 1 shows how your loudspeaker and listening positions should be arranged. The listening positionâequidistant from the speakers, and slightly farther from each speaker than the speakers are from each otherâis called the “sweet spot.” This is roughly the listening position where the music will snap into focus and sound the best. If you sit to the side of the sweet spot, the soundstage will tend to bunch up around one speaker. This bunching-up effect will vary with the loudspeaker; some loudspeakers produce a wider sweet spot than others. When you sit exactly between the speakers, a “phantom” center image is created; you hear a vocalist, for example, as coming from a position between the speakers. When you move off to the side, the vocalist’s image moves toward the speaker you are closer to.

The ideal speaker separation will produce a strong center image and a wide soundstage. There will likely be a position where the center image snaps into focus, appearing as a stable, pinpoint spot exactly between the loudspeakers. A musical selection with a singer and sparse accompaniment is ideal for setting loudspeaker spacing and ensuring a strong center image. With the loudspeakers fairly close together, listen for a tightly focused image exactly between the two loudspeakers. Move the loudspeakers a little farther apart and listen again. Repeat this move/listen procedure until you start to hear the central image become larger, more diffuse, and less focused, indicating that you’ve gone slightly beyond the maximum distance your loudspeakers should be from each other for a given listening position.

Rule #2: The nearer the loudspeakers are to walls and corners, the louder the bass.

Loudspeakers placed close to walls will exhibit a reinforcement in the bass (called “room gain”), making the musical presentation sound weightier. When a loudspeaker is placed near a wall, its bass energy is reflected from those walls back into the room essentially in phase with the loudspeaker’s output. This means the direct and reflected waves reinforce each other at low frequencies, producing louder bass. The closer to the corners the loudspeakers are placed, the more bass you’ll hear. A simple fix for boomy bass is to move the speakers out into the room farther from the rear and side walls.

The loudspeaker’s position in relation to the rear and side walls will also affect which frequencies are boosted. Correct placement can not only extend a loudspeaker’s bass response by complementing its natural rolloff, but also avoid peaks and dips in the response. Improper placement can cause frequency-response irregularities that color the bass. That is, some frequencies are boosted relative to others, making the bass reproduction less accurate. For this reason, the loudspeakers should be positioned at different distances from the rear and side walls. A rule of thumb: the two distances should not be within 33% of each other. For example, if the loudspeaker is 3′ from the side wall, it should also be at least 4′ from the rear wall.

Insider with Robert Harley — The Six Rules of Loudspeaker Placement: 3-4