In high-end audio, context can be everything. Directly following this review, I have also prepared a review of iFi Audio’s Nano iDSD portable DAC/headphone amplifier, in which I observe that the iDSD can be a very fine-sounding headphone amplifier if—and this is a big ‘if’—it is used with the sorts of high-sensitivity headphones and earphones that it is capable of driving well. But this observation naturally invites a question? What happens if you want to listen through not-so-easy-to-drive headphones? The simple answer is that the iDSD runs out of sonic steam in such contexts, meaning you might want to consider using a more powerful auxiliary headphone amplifier such as iFi’s portable Nano iCAN amp (£149), so as to have more sonic ‘muscle’ at your disposal. 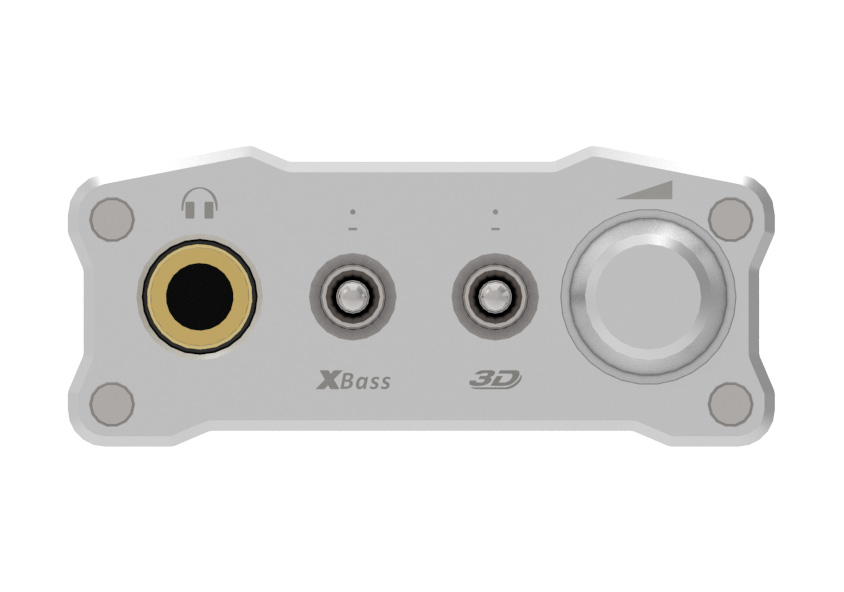 “But hold on a second,” I can hear the diehard specifications readers interjecting, “iFi says the Nano iDSD makes almost as much power as the Nano iCAN does, so what good will adding an iCAN do?” It’s a fair question because iFi’s published technical specifications claim the Nano iDSD’s amp puts out about 130mW of power (at 16 Ohms), while the Nano iCAN’s amp produces 150mW of power (at 32 Ohms). So, the iCAN is nominally the more powerful product, but not by so large a margin as to lead us to expect significant sonic differences, or so it might seem at first glance. However, in practice the Nano iCAN sounds demonstrably and substantially more powerful than the iDSD does, which is why I think it makes a terrific add-on—or a fine choice for those who need a good, versatile, low-cost portable headphone amp, whether they use portable DACs such as the iDSD or not. 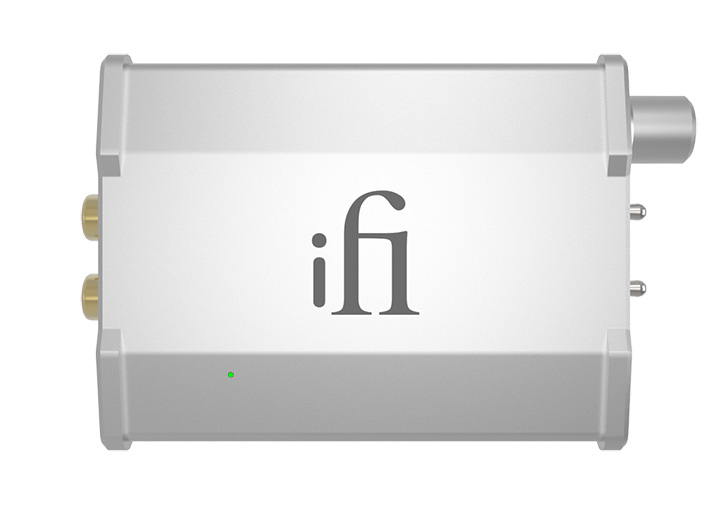 Perhaps the easiest way to understand the Nano iCAN is to picture it as a portable model roughly half the size and less than half the price of iFi’s bigger and more potent (but non-portable) Micro iCAN headphone amp. And, though the Nano iCAN offers less power output, it preserves many (perhaps even most?) of its bigger brother’s sonic virtues. If you’ve read our Hi-Fi+ review of the Micro iCAN (from issue 97), then you know we regard it very highly and consider it a benchmark in its price class.

The prospect of achieving very similar sound quality from a unit that’s smaller, less expensive, and portable to boot can only be considered a good thing.

What is more, the iFi folks somehow managed to endow the Nano iCAN with almost all of the features of the bigger amp (albeit in a more streamlined form). For example, the Micro iCAN sported a two-position ‘Xbass’ low-frequency boost switch, which in the Nano iCAN has been simplified single-position ‘Xbass’ switch. Similarly, the Micro iCAN offered a two-setting ‘3D’ enhancement circuit that has been distilled down to a single-setting ‘3D’ switch for the Nano iCAN. But, given that less is often more in high performance audio components, one might argue that the Nano iCAN’s simpler control circuits work even more intuitively and actually sound better than the more complicated versions found in the bigger Micro iCAN.

Before delving into sonic qualities, let’s do a quick tour of the Nano iCAN’s features and functions. The little amp provides two stereo analogue inputs (one via RCA jacks, the other via a 3.5mm mini-jack), and a single 6.35mm TRS headphone jack. There are two tiny toggle switches for the aforementioned Xbass and 3D controls, plus a combination on/off switch and rotary volume control. A tiny, recessed, green LED serves as a pilot light, while on the bottom of the unit we find a pair of recessed DIP switches that allow users to select either +6dB or +18dB of master gain (the former setting is for high sensitivity earphones, IEMs, and headphones, while the latter is for more difficult-to-drive and/or power-hungry headphones). Interestingly, iFi documentation indicates that, once the Nano iCAN’s 1400mAh battery is fully charged, playing time is a stonking 70 hours, which means that—depending upon your listening habits—you might conceivably charge up the Nano iCAN before going on a long-ish trip and not really need to charge it up again until you got home. Pretty cool idea, no? 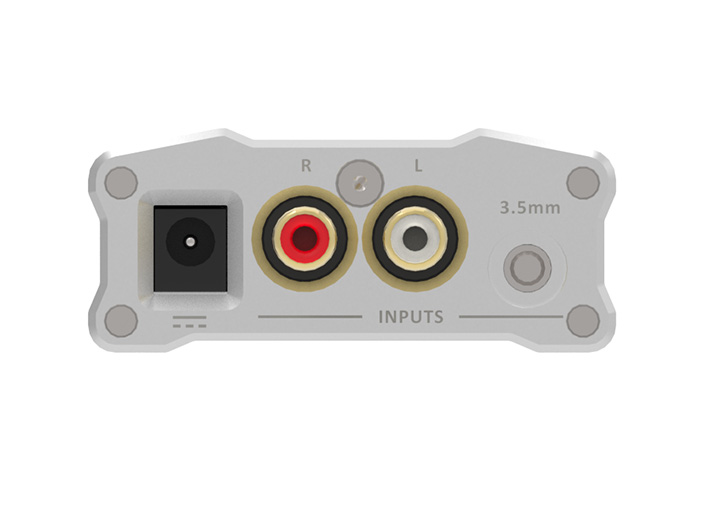 But now, let’s shift our attention to the Nano iCAN’s sound. To appreciate the qualities the Nano iCAN brings to the party I found it instructive to connect my reference Audeze LCD-3 planar magnetic headphones first (and directly) to the Nano iDSD DAC/amp and then to add in the Nano iCAN as an auxiliary amp for use with the iDSD. As you would expect, the iDSD was indeed able to drive the fairly demanding LCD-3s to a point, though without—to be honest—coming even remotely close to eliciting all the performance the LCD-3s have to give. When the Audezes were driven straight from the iDSD they sounded reasonably clear and articulate, but lacking in body, three dimensionality, natural warmth, and especially bass weight. In short, I was hearing all of the expected warning signs that the LCD-3 was simply ‘too much headphone’ for the iDSD to handle on its own. 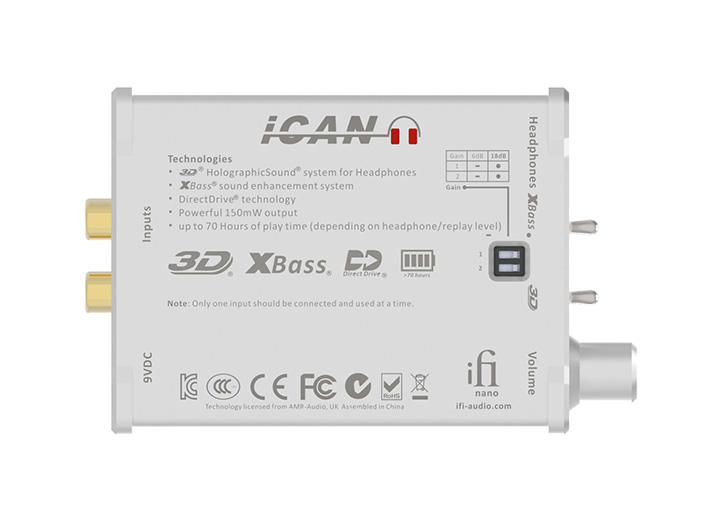 But, the minute I added the Nano iCAN to the signal path, everything got better in a big, big way. Suddenly, the presentation sounded appropriately full-bodied, full of natural and organic weight and warmth, while dynamics became markedly more expressive and, when the music warranted, downright powerful. Candidly, the before/after difference was so great that the LCD-3 almost sounded like a different headphone with the Nano iCAN in play. Does this mean the iDSD has an inadequate or ‘weak’ amplifier? No, not at all. But it does mean the iDSD is fairly particular about the loads it can and can’t drive well. The Nano iCAN’s role, however, is to open up the playing field to help the iDSD (or any other portable source component) drive a much broader spectrum of headphones and earphones. This it does wonderfully well and with such good-natured grace and exuberance, refinement, and sophistication, that you may find yourself wondering how iFi managed to pack so much goodness into such a small case for just £149. Trust us: It’s money well spent.

Putting Some English on Jazz