So many of today’s digital-to-analog converters are simply variations on a theme. Wildly disparate models from wildly disparate companies are built around the same basic building blocks of integrated circuits—DACs, USB input receivers, digital filters, etc. Although the implementation of these parts varies from primitive to sophisticated, and from budget to costly, many DACs are designed with this “paint-by-numbers” approach.

But a few companies eschew this path, instead contributing proprietary engineering innovations to the product. Greece’s Ideon Audio is a good example. The Athens-based firm has developed its own technologies that replace standard off-the-shelf parts or has developed software and ancillary hardware to extract higher performance from standard components.

The company’s flagship products, the Absolute Epsilon DAC, Absolute Stream music server, and Absolute Time Master Clock reviewed here exemplify this custom approach. But before I delve into these products, you may be wondering who Ideon Audio is. About eight years ago an Athens-based audiophile and information-management professional named George Ligerakis bought an inexpensive DAC kit from another Greek, engineer Vasilis Tounas. After hearing how much better this inexpensive DAC sounded than his highly regarded four-figure model, George challenged Vasilis to create a more ambitious converter. After hearing the superb result, George proposed that they go into business to build and market Vasilis’ designs. Launching with the affordable Ayazi DAC, the company grew, necessitating bringing in Angelos Gallis with Novatron SA to handle logistics and import-export. Since the company’s founding in 2016, Ideon Audio’s line has expanded to eight products, and the brand is now sold in 12 countries. 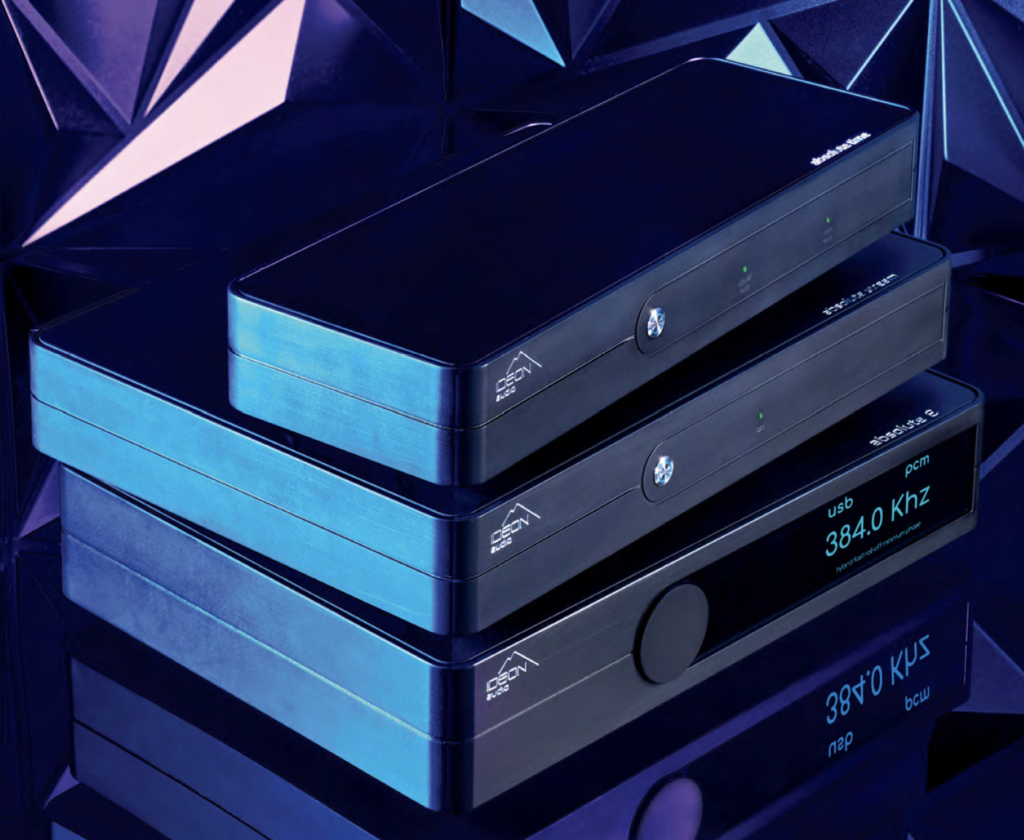 The Absolute Epsilon DAC will decode any PCM signal up to 384kHz/32-bit and DSD up to DSD1024. It doesn’t offer MQA decoding, but it is a Roon-certified endpoint. Digital inputs include USB, SPDIF on an RCA jack, and AES/EBU on XLR. Both balanced and unbalanced analog outputs are provided. The front panel is dominated by a large display and multi-function knob. The knob allows you to select one of seven digital filters and well as perform many control functions. One of these functions is choosing a fixed or variable output level. When in variable output-level mode, the knob acts as a volume control. Although you can drive a power amplifier directly from the Absolute Epsilon’s variable-level analog output, Ideon strongly recommends using the DAC in fixed-level mode and feeding the DAC’s output to a preamplifier. There are two good reasons for using a preamplifier in the system rather than driving a power amplifier directly from the DAC. The first is that the preamp acts as a buffer between the DAC output and the power-amplifier input. The preamp relieves the DAC of the burden of driving the cables to the power amplifier, as well as driving the amplifier’s input stage. Secondly, the Absolute Epsilon’s volume control is realized in the digital domain rather than with an analog attenuator. Consequently, reducing the volume from full scale results in a loss of resolution, specifically one bit for every 6dB of attenuation. The take-home message is that although the Absolute Epsilon will functionally drive a power amplifier directly, you won’t realize the product’s performance potential unless you use a preamp. In my experience, driving a power amplifier directly with a DAC’s output can result in a more transparent sound and greater detail (particularly with lower-quality preamps), but this often comes at the price of somewhat muted dynamic contrasts and a reduction in bass weight and impact.

The Absolute Stream connects to your home network via Ethernet and outputs digital audio on one of its two USB ports. These ports can drive any DAC directly, but in the review system the Stream’s USB output fed the Absolute Time USB reclocking unit, which in turn drove the DAC’s USB input. The Absolute Stream has two USB ports for connecting external USB drives. Ideon supplies its own web-based music-management app, or you can use Roon if you have Roon Core running on a computer that is connected to the network. The customer can specify no internal music-storage memory in the Absolute Stream, or between 1TB and 4TB. This default option of no storage lowers the entry price for those listeners who will stream music exclusively, or who will connect to an external NAS drive. Finally, the Absolute Time Master Clock operates a little differently from many master clocks. Rather than output a clock signal to which the other digital components lock, the Absolute Time takes in USB from the server and outputs USB to the DAC. The Absolute Time isolates the DAC from any noise from the server, as well as reclocks the signal for greater fidelity. It is housed in a chassis the same width as the DAC and server, but the chassis is only seven inches deep. The Absolute Time can, however, be ordered in a full-depth chassis for a more uniform look between the three products.

The review samples were black anodized, although silver is also available. The products can also be ordered in custom finishes.

I’ve broken out some of the products’ design details in the sidebar, but the short description is that these components are built to a very high standard. All are housed in massive chassis machined from solid aluminum billets. The power supplies are large and elaborate, with multiple stages of cascaded regulation. The Absolute Epsilon DAC is built around the popular ESS Sabre 9038PRO chip, but it is implemented in an entirely innovative and unique way, which required Ideon to write 4000 lines of code to extract the most performance from the device. The USB input is a custom design rather than an off-the-shelf solution, and the analog stage features a unique quad-architecture that is fully balanced throughout. The products carry a seven-year warranty. (See the sidebar for a more in-depth description of the technology.)

The first thing that struck me about the Ideon trio was its extremely lively and dynamic presentation. The first four words in my listening notes are “very fast, dynamic, punchy.” The Ideon trio is no shrinking violet, but rather offers an up-front and incisive sound thanks to its very wide dynamics, powerful transient impact, and sheer speed in rendering music’s dynamic nature. I don’t think that I’ve heard any digital front end that has this level of transient speed and “jump factor.” That’s not to say the sound was etched or hyped—such a presentation would soon lead to listening fatigue. Rather, the Ideon trio was simply sensationally lifelike in the way it portrayed music’s dynamic structure. Music with a strong beat and a big snare sound—”Cousin Dupree” from Steely Dan’s Two Against Nature, for example—had grab-you-by-the-throat impact. Even subtle drumming was brought to the fore by virtue of the Ideon’s transient fidelity—Jack DeJohnette’s delicate expression on the Keith Jarrett album My Foolish Heart, for example. Overall, music’s rhythm had a sense of tight precision. Even instruments that don’t have the steep leading edges of percussion instruments, such as brass, were reproduced with a sense of dynamic verve and life. Trumpet entrances, for example, were vivid and alive, the instrument seemingly appearing from nowhere with that initial leading-edge “blatt” that one hears from trumpets in life. The Ideon stack reminded me of a horn loudspeaker, with its effortless reproduction of dynamics and feeling the physical presence of the sound.

Another salient characteristic was the Ideon’s warm, rich, and generous bottom end. The bass was big and powerful, with plenty of weight and extension. On a superbly recorded acoustic bass, such as the solo track “Blue Bossa” from Brian Bromberg’s Wood II, the Ideon conveyed the convincing illusion of a big round wooden instrument resonating between the loudspeakers. Or try Ray Brown’s incomparable swinging on Soular Energy or Duke’s Big 4. The Ideon stack favored weight and warmth rather than a lean and tight rendering. There was a bit of extra bloom in the bottom end which gave the presentation a big, powerful, and weighty quality, much like the way a ported speaker sounds compared with a sealed-box design. Overall, the Ideon’s bass extension and fullness created a warm and rich tonal foundation for the music. 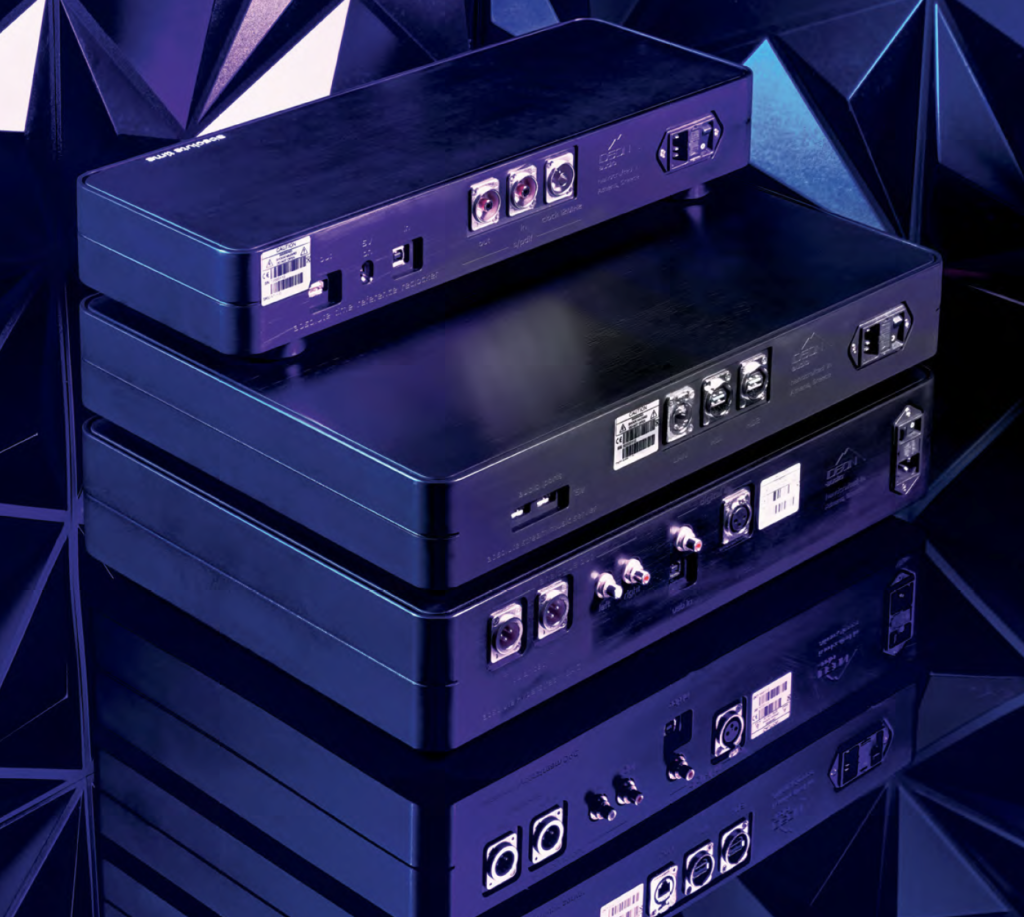 With its immediate and extroverted personality, the Ideon had a palpable sense of presence, particularly with vocals. They seemed to project a bit forward in the soundstage, sometimes with startling immediacy. Vocals had superb intelligibility; I heard nuances of pronunciation and expression on familiar recordings that I’d never heard before. The Ideon’s expressiveness on vocals ranged from the most quiet and tender passages from Norah Jones (Come Away with Me) to the raw, Janis-like belting of the great blues singer Beth Hart on her album Don’t Explain. The Ideon engendered a visceral sense of nothing between me and the singer. I heard this quality throughout the listening on a variety of instruments, not just vocals. Trumpet solos seemed to soar, untethered to the speakers and separate from the mix. Try “Backrow Politics” from the album Act Your Age from Gordon Goodwin’s Big Phat Band, with its fabulous dueling trumpet exchanges.

Soundstage transparency and overall clarity were outstanding. The Ideon’s sound conjures an analogy with a perfect crystal—a complete absence of haze, murkiness, or thickness. A newfound favorite recording that immediately reveals a digital front end’s veiling is the spectacularly recorded (by Keith Johnson) John Williams at the Movies on Reference Recordings, available at 176.4kHz/24-bit on Qobuz or download. Played back on the best digital source components, the depth and layering of the instruments of the Dallas Winds Band is breathtaking. The Ideon trio did a superb job in presenting a believable illusion of the large wind band in the hall, with precise image placement, plenty of air around individual instruments, and an expansive sense of depth. Moreover, well-recorded orchestral music was spectacular in its sense of size and scale. In fact, the scale was big and expansive in every dimension—spatially dynamically, and tonally.

I listened to the seven different filters and thought that the “Apodizing Fast-Rolloff Minimum-Phase” filter sounded the best in my system. With this filter, the treble was a little smoother and more relaxed. Although the Ideon trio’s fundamental sonic character as I’ve described it remained constant, small variations could be realized by changing digital filters.

The Absolute Epsilon DAC, Absolute Stream music server, and Absolute Time master clock are in the upper echelon of today’s best digital playback. The trio has some remarkable musical attributes, including stunningly lifelike reproduction of music’s dynamics. The sense of immediacy and presence—the impression of nothing between you and the music—was equally impressive. The Ideon trio’s vivid palpability brought to mind an analogy with a big horn speaker, with its verve and life. Commendably, the Ideon stack sounded superb with standard-resolution files, not just with hi-res. This is an important consideration when choosing a DAC, because most of our sources are standard-res. If you prefer a soft, rounded, laid-back presentation, audition the Ideon carefully to be sure it matches your system and listening tastes.

Although you can use Ideon’s music-management app to control the Absolute Stream, I found, not surprisingly, that Roon was a more friendly interface (although I’m very familiar with Roon and was new to the Ideon app). Finally, the design and build-quality of these Ideon products was superb, from the extensive power supplies to the custom software, to the chassis machined from aluminum billet.

If you are in the market for a top-quality digital front-end, the Ideon Absolute Epsilon DAC, Absolute Stream server, and Absolute Time clock should be on your short list of products to audition.