The world of digital streaming is one that I admittedly am not as comfortable with as other formats. I still cling to my analog roots and treasure the ritual and spirit of vinyl LP playback–with all its eccentricities. However, even if I find the streaming universe somewhat less than warm and fuzzy the Meridian Explorer I’ve been listening to is an awfully compelling little device. Add to that list the HRT microStreamer. And micro is right–this aluminum encased USB/DAC is as tiny as a Zippo (see picture below for perspective) and priced at a modest $189. It’s 24-bit/96kHz resolution is a step down from the Explorer’s 192kHz sampling rate.  But strongly in its favor for the entry-level audiophile is a retail price that undercuts both the $300 Explorer and segment-leading $249 AudioQuest Dragonfly, all the while sacrificing little in sonic achievement to either.

Pricing Note: Keep in mind that the microStreamer requires a USB mini cable (included) the Dragonfly is a thumbdrive-style unit eliminating the need for that interconnect (somewhat ironic, since AudioQuest is a wire company, but never mind). Some have suggested that the thumbdrive makes it and the computer more vulnerable to damage from accidents. Could be but in its favor is the elimination of an interconnect from the audio chain which is never a bad thing in my view. And while the HRT’s stock wire works just fine, the microStreamer (especially in higher resolution systems) does benefit from a wire upgrade as I experienced with the AudioQuest Coffee USB Mini Cable, $279 (.75M). It improved overall focus, tightened the bass slightly and restored a stronger sense of dimension and ambience. Even more impressive was this wire during high resolution playback. ( I’ll have more to say about that in another upcoming blog.) 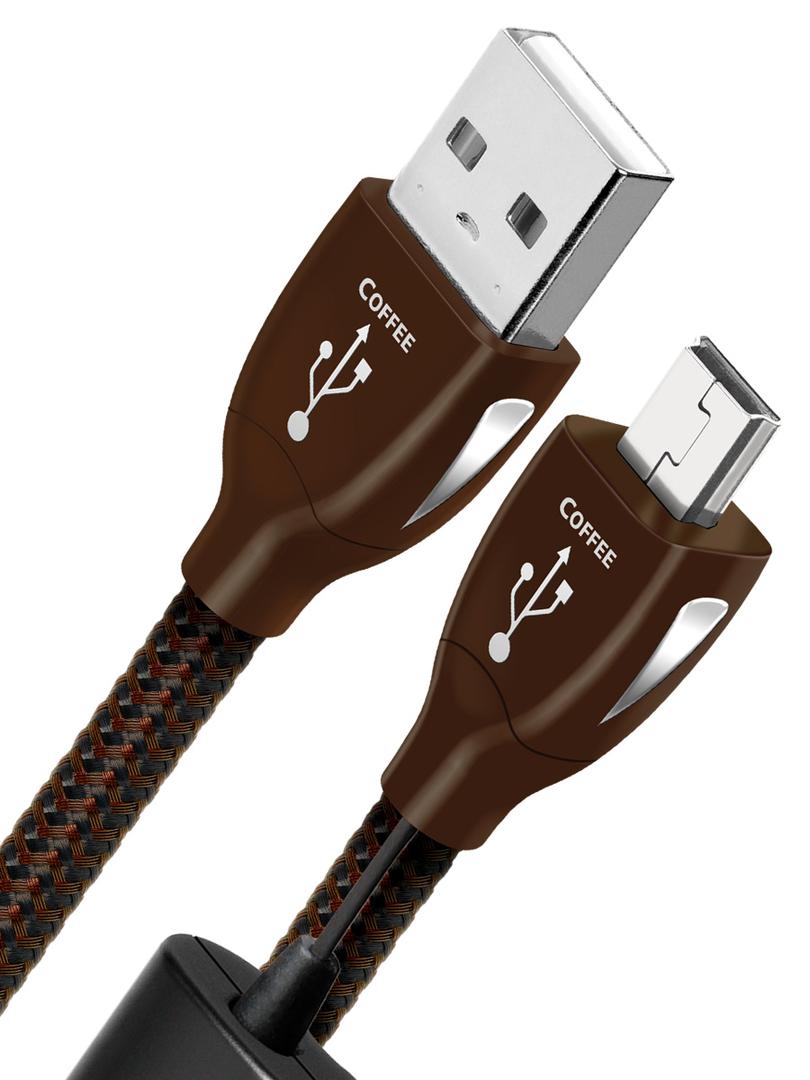 Just to summarize; The USB powered microStreamer runs in asynchronous mode thus eliminating computer borne jitter (timing errors). Operation is 24-bit and the microStreamer supports 32, 44.1, 48, 88.2 & 96 kHz sample rates indicated by tiny LED lights along the side of the unit. It has both a line level 1/8th inch stereo output and a 1/8th inch variable output headphone jack controlled by a digitally activated analog volume control of the headphone output. Finally its designed and manufactured in Southern California. As a local, I have to admit, I like that! 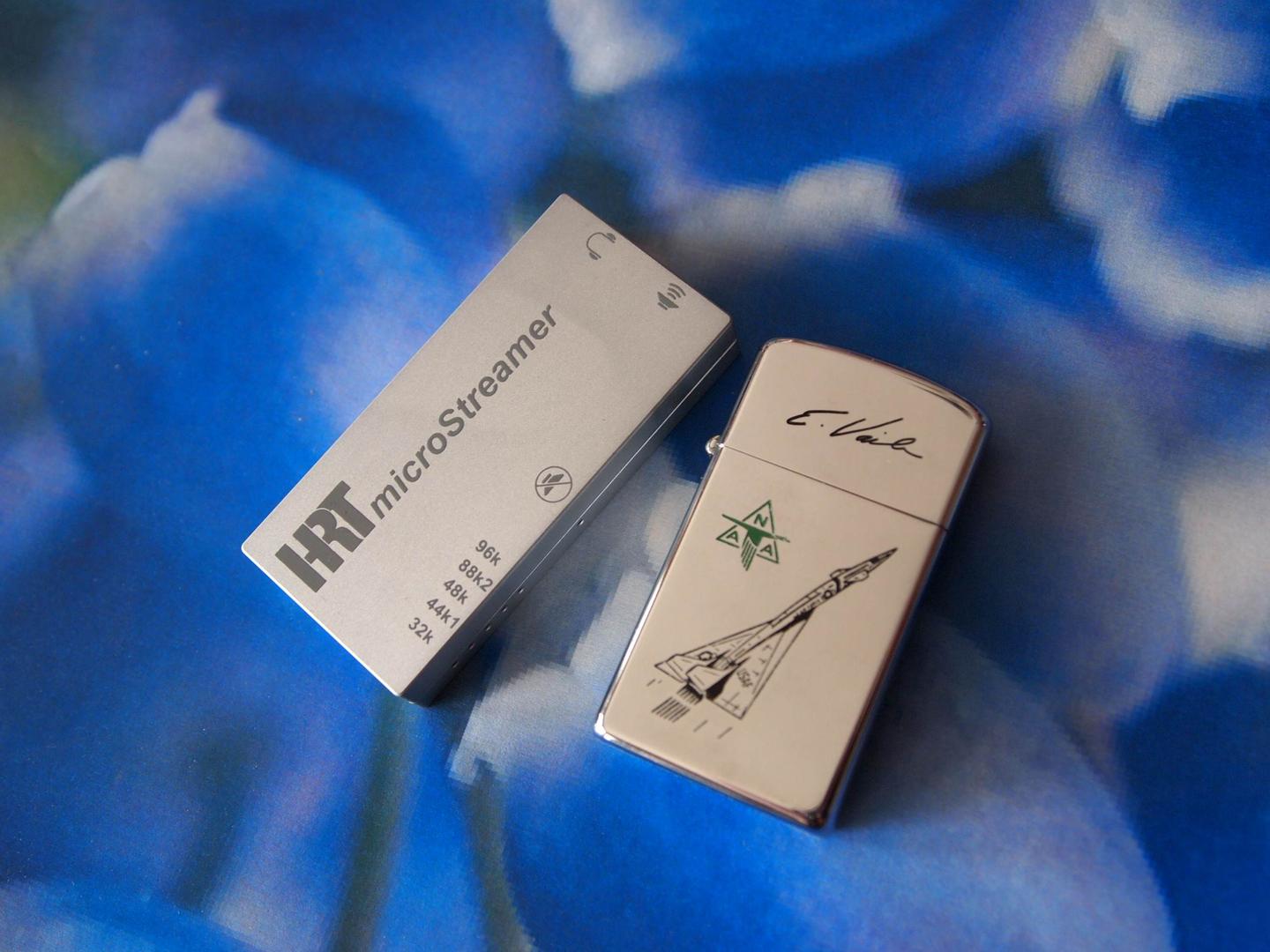 Sonically the pocket-sized USB/DAC segment is improving by leaps and bounds. My preliminary seat of the pants impressions of the microStreamer were nothing less than hugely positive. From the get-go it compelled me to keep listening with an addicting liveliness quotient, a potent sense of pace, dynamic energy and solid image placement. Gone is the narrowed, crowded soundstaging and ephemeral imaging and sloppy bass reproduction that dogged earlier USBs that I’ve  experienced in the last couple of years. During Copeland’s Fanfare for the Common Man the microStreamer describes the dimensions of a venue thoroughly from the wings to the back wall upstage. Bass dynamics, both micro and macro gradations and timbral detailing were suitably majestic and unrumpled [Reference Recordings].

During a track like Mary Gauthier’s “Camelot Motel” the sibilance range, tended to settle in comfortably with all other criteria of the performance rather than sticking it to the listener like a porcupine quill. For Alison Krauss’ “Slumber My Darling” from Appalachian Journey, the microStreamer conveyed terrific image focus and smoothly traced the contours of her voice, eliminating any sense of a harmonic disconnect between her body resonances and angelic head voice.  As I listened to “Air” from the Hans Zimmer soundtrack to The Thin Red Line, bass potency, goes from the lean cuisine of earlier budget DACs to full bore prime impact. And then there’s the timbral and resonant components that accompany each drum impact as they fade into the darkness– they sustain longer, encountering more ambient space as they do. They are more tactile allowing me to hear more of the drum’s “skin” in the game. the backgrounds also grow “quieter”, the music emerging from a deeper place on the stage.

Perspective is everything in this price range so it probably goes without saying that the USB/DAC stage of the mbl C31 transport ($9200) bests the efforts of the HRT, AudioQuest and Meridian. Strings are sweeter, ambient information is more deftly defined and acoustics & low level resolution are more thoroughly explored but this is in the context of a more costly audio chain–one that completely ignores portability and convenience. Such criteria are critical especially for headphone wearers on-the-go.

I’ll probably have more impressions down the road but in the meanwhile HRT has produced a terrific piece in the microStreamer that further intensifies the stiff competition in this segment. It doesn’t necessarily knock the Audioquest Dragonfly off its perch but convincingly elbows its way into the picture with a combination of price, features and sonics that are hard to beat. Price: $189. highresolutiontechnologies.com