Mike Latvis, the chief engineer of Harmonic Resolution Systems, based in Buffalo, New York, doesn’t like to talk about isolating audio products. He loves it. Over a year ago, at an evening demo at an audio store called JS Audio in Washington, DC, I saw him field one question after another as a group of audiophiles huddled around him listening with rapt attention. It sounded like he was delivering a scholarly disquisition as he held forth on various theories of isolating audio gear. Suffice it to say that Latvis, who before starting HRS in 1999 worked on hundreds of vibration-isolation and mechanical noise-reduction projects for companies such as Lockheed Martin, Boeing, Sikorsky Aircraft, and Airbus, knows his craft. So, when I needed a custom reference stand for my new TechDAS Air Force Zero turntable, I figured he was the guy to build it.

After months of research, Latvis modified his reference VXR stand, which can be ordered in various finishes, to accommodate the formidably sized Zero. He came up with an ingenious design that has four pods that extend slightly beyond the frame of the stand on which to seat the legs of the Zero. When he whipped out a diagram of his proposed model, the complexity of the internal bolting system almost took my breath away. So did the aesthetics. The upside of his design was that he managed to minimize the bulk of the frame itself, while successfully supporting the massive turntable.

HRS has the ability to completely ground or isolate its VXR stand. Does it sound better grounded or isolated? The customer can listen to a turntable both ways at a dealership and decide which approach he prefers. In my case, the four air bladders on the Zero dictated that it was best not to attempt to isolate the top four pods. Instead, they are directly grounded to the floor, with the turntable providing its own isolation. Given the jet-black backgrounds produced by the TechDAS Zero, the stand seems to be working quite efficaciously in tandem with it. 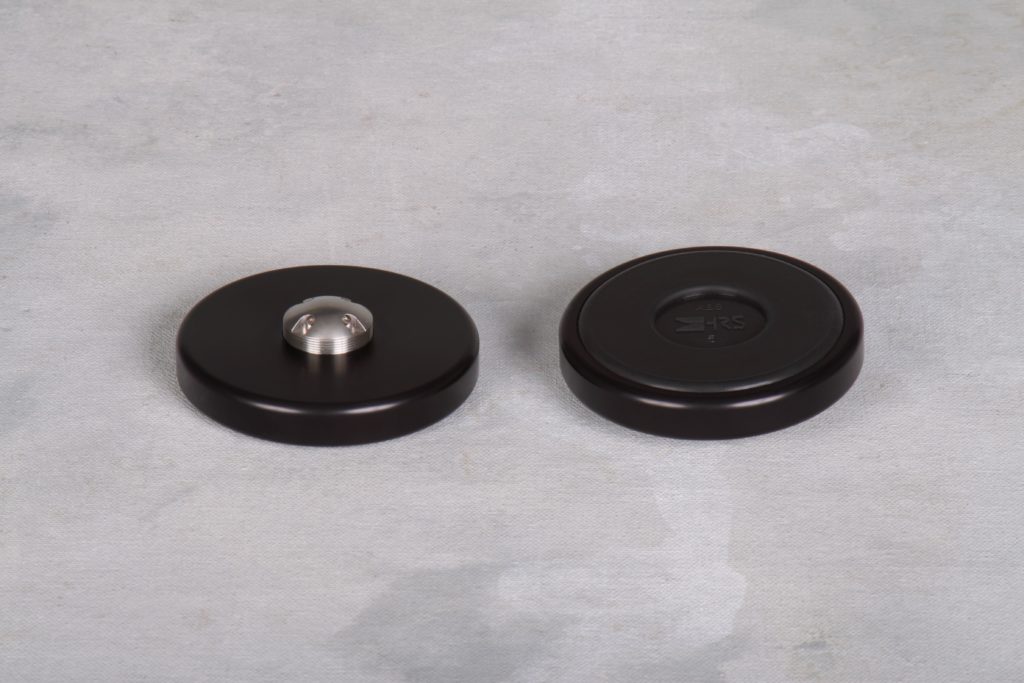 But this isn’t where matters rest. The VXR stand also has two isolation bases that are loaded into it (in my case, to house a phonostage and preamplifier), each optimized for the weight range of the products they’re supporting. My distinct impression upon placing the phonostage and preamp on the stand was that the isolation bases were providing several musical benefits. There was a plusher, silkier feel to the music. I also discerned smoother highs and more controlled bass.

Overall, the VXR stand and isolation bases significantly improved the performance of my stereo system. I could have let matters rest here. But Latvis was eager for me to try several other isolation devices that he developed to complement his stand. One is called Vortex. It’s a stainless-steel puck with a dark rubber coupler that you place underneath the chassis of a piece of equipment to help isolate it from the stand itself. According to Latvis, “When you do isolation, you have to deal with chassis noise. You cannot hear what the isolation base is doing unless the chassis noise is being rapidly dissipated out of the unit.” He adds that “you can’t count on adding stiffness to a chassis that’s already stiff. We don’t think a traditional footer is ideal. We want something that works rapidly. I played around with a lot of different configurations, and any time we used a metal-to-metal interface, we would get rapid transfer, but we would also add an edge to the sound—a ringing effect.”

So, Latvis didn’t want to create a direct-transfer path. Instead, his goal was not just to transfer energy away from the chassis but to dissipate it and to prevent its return to the chassis. The result was the new HRS Vortex footer system for stiff-chassis noise reduction. To provide this rapid dissipation, he adds a custom-made HRS Damping Plate in the form of a black-anodized, machined, aircraft-aluminum-billet top joined to a proprietary soft-polymer base. The effect of creating this sandwich is something you not only instantly hear, but also feel. The chassis of the Ypsilon preamplifier is stiff, but does resonate a bit if you knuckle-rap it. With the sandwich beneath it, a dull thud replaced the resonance. When I placed the dampers by themselves on top of a pump box, any residual hum was banished. From that standpoint alone, the dampers proved extremely effective.

Mark Levinson No 5101 Network Streaming SACD Player and DAC, No 5206 Preamplifier, and No 5302 Power Amplifier

Use the descriptor “lifestyle product” in the the wrong crowd—that […]