There is no product category with a wider range of available price options than music streamers. I have reviewed under-$100 streaming solutions, such as the Muzo Cobblestone ($59), and premium options, such as the Aurender ACS10 ($6000–$8000), but these were all “turnkey” products that came completely assembled and ready to install. There is another way—Do It Yourself (DIY). Welcome to the wonderful world of Raspberry Pi streaming solutions. This option isn’t new—computer hobbyists have been using Raspberry Pi’s for years. And even some turnkey items, such as the Bryston 3.14 streamer/DAC I reviewed in Issue 309, use a Raspberry Pi internally as the basis of their own proprietary streamer.

This article will introduce you to Raspberry Pi, and some of the many options for assembly and use. The goal is to encourage you to consider and maybe even try a Raspberry Pi project yourself. For slightly under $100 you can have a Roon-compliant streaming endpoint capable of supporting high-resolution PCM, FLAC, DSD, and even MQA files (if supported by your DAC). How good can it sound? That depends more on your DAC’s capabilities and sonics than on the Pi itself. And if you want to go “ultra-fi” there are power supply and SPDIF upgrades for the Pi that claim an even higher level of performance.

At this point, I have to give credit to Neil Small, administrator of the Facebook group “Roon Users” (facebook.com/groups/297515554867194), who assembled what could best be described as an Idiot’s Guide (I was able to do it , so…) to assembling and setting up a Raspberry Pi with Diet Pi software, as well as some useful performance tweaks. He also gave me several very necessary tips on how to install a “Sleep” extension in the Roon core (now no longer needed as Roon finally added a built-in sleep function). I was also aided in the project by David C. Snyder, who patiently answered my more clueless questions. These two are experts. I’m a journalist.

Goals—Don’t Make It Into Another Hobby

My own goals in assembling a Raspberry Pi streaming endpoint were simple. I wanted a way to stream and use external DACs without an integrated turnkey solution, and I wanted something that I had complete control over, with no surprise software updates, that would be Roon-recognized and compliant with standard streaming protocols. And, yes, I wanted something that even a 21st-century retiree could still readily afford. Finally, while I know of many audiophiles who have morphed their audio hobby into a computer hobby, I wanted to remain primarily an audiophile, not a computerphile, so I wanted something that was simple enough that could be made to sing and dance to my requirements without resorting to hours of programming. A Pi Streamer setup can accomplish all these goals. If you want, you can get as obsessive about computer audio as you like.

Advantages Of A Pi System

And what is a Pi? It is nothing more than a relatively simple computer that can run a stripped-down operating system. Some of the available OS’s, such as Diet-Pi, were created specifically for the Pi. Many are Linux-based. I have two Pi’s, each with a different OS. One has RoPieee XL, while the other has Diet-Pi. Both operate flawlessly as Roon endpoints. Are there reasons for choosing one OS over another? Yes. Some are easier to set up, while others offer more apps and options. Depending on your own requirements, you may well find one that is better than the others, but there is no universally accepted “best” OS or set-up configuration. However, just as with analog turntables, the final tweaking of the operating environment can make a big difference in the outcome.

As I just noted, I currently have two Raspberry Pi’s in my home. My Pi3b is Ro-     Pieee-based with an Allo hat. What does that mean? Currently you can purchase either a Raspberry Pi3B ($40) or Pi4 ($40). A Pi3B is an earlier model than the Pi4, and it has the disadvantage of a USB buss sharing throughput with the Ethernet buss. The way around this USB issue for optimal fidelity is to add a second accessory board on top, called, appropriately, a hat. Allo (allo.com) currently offers two “hat” accessory boards for the Pi that give you a SPDIF output, the DigiOne ($99) and DigiOne Signature ($239). I have the DigiOne hat, which unlike the signature version, does not require an additional dedicated power supply to operate. The DigiOne has a jitter specification of only 0.6ps via its SPDIF output, which rivals the better turnkey streamer specifications. My second Pi is a Pi4 running with a Diet-Pi OS and no hat. With these two Pis in my arsenal I can use any DAC in my possession for streaming. I use the Pi3 for SPDIF DACs and the Pi 4 for USB DACs. 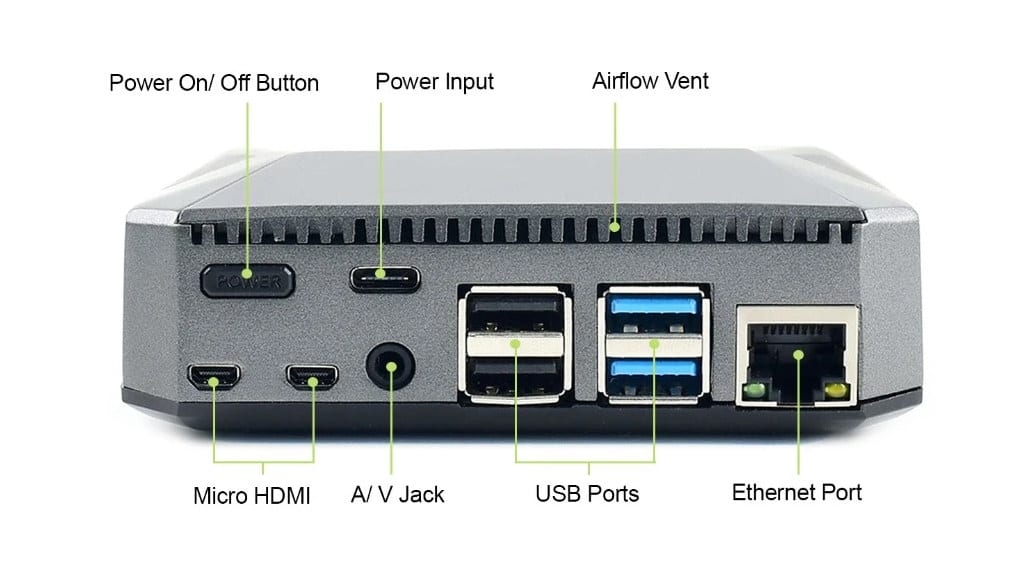 Tweaks for a Pi system come in two varieties—software set-up refinements and power-supply options. As I mentioned earlier, there is no single, universally recognized optimal OS or bunch of settings for best sonics, since that will depend on multiple individual factors in your system. But improving the Pi’s power supply is an almost universally accepted means of improving a Pi’s performance. I have used a number of different power supplies with my Pi’s, including Canakit 3.5A ($9.99), Aragon One ($11.99), and IFI 5V ($49). Once by accident, I used a different power supply that provided slightly less juice than the Pi’s minimum requirements. It powered up and seemed to work, but it could not produce sound. Replacing it with an adequate power supply made things right again. If you opt for a USB DAC configuration for your Pi, the power-supply specifications are even more important since many USB DACs get their power from the USB. Some DACs with rigorous power-supply demands may require an external powered USB hub to operate successfully with a Pi. To avoid problems I bought a little tool called a USB digital tester that you, too, may want to acquire. It lets me see the voltage and amperage draw of any externally attached USB device. The “Eversame” brand of tester set me back a whopping $16.29 via Amazon. An AudioQuest Dragonfly Red gets 5.13 volts and 0.04 amps from my MacBook Pro 2015 according to the Eversame.

You have many options for cases to house a Raspberry Pi board. Some are transparent or smoked plastic; others are heat-finned metal; some have fans; others utilize convection cooling only. I have my P3 in a clear plastic case with metal pillars. It allows for good ventilation, but all the internal LEDs can be awfully bright in a darkened room. My Pi4 is in the Aragon One case ($25 via Amazon), which has a fan, turn-on button, and an additional board that moves all the connections to the same side, making for a much neater setup. Also, it has a single, dim-red LED to show it’s on (instead of a lightshow).

For an article that’s not about Roon, I’ve mentioned it a lot. My apologies to those in the know, but let me bring readers for whom the term is new up to speed. Roon is a player/library application that allows you to integrate into one player app Qobuz and Tidal (as well as Dropbox) and your home music library or libraries. Roon uses its own proprietary format, RAAT, for device interface, which Roon claims offers better insulation from noise and interrupts. Roon also has well-above-average search and metadata integration compared to any manufacturer-supplied/created playback app. On top of these features Roon has extensive DSP options, and it will perform the first unfold of an MQA file for use with any DAC. One final feature of Roon, which makes a Pi streamer a much more attractive option, is that Roon’s user interface and available features are the same with a Raspberry Pi as with any other Roon-compliant DAC or streamer, regardless of price. Using a tablet or phone for Roon control means that, for an end user, there is no difference between using Roon on a Pi and using it on any other Roon-recognized device. I’ve heard prospective purchasers grumble about yearly payment for Roon, but if tethered to a Pi system, the Pi’s low hardware costs still make Roon an attractive and affordable part of a complete streaming solution.

Audiophiles who’ve been using digital files for a while remember that at one time AES/EBU and SPDIF digital connections were the primary interfaces for DACs. With computer-based audio, USB became the main audio interface, and now that streaming has become the dominant music source, Ethernet and Wi-Fi are increasingly becoming the dominant interfaces. During all this time many fine DACs have been left to collect dust because they had the wrong interface. If you go with a Raspberry Pi streaming solution, you can, depending on whether you have a USB or SPDIF DAC, make it part of a new streaming solution. If the DAC is capable of 192/24 and DSD, it can be used to stream virtually anything and everything when connected to a Pi, even MQA if you use Roon or Audirvana as your player app.

Could A Pi Be In Your Future?

While I could, at this point give you a rough “assembler’s guide” for assembling a Pi streamer, I don’t feel I can add anything to Neil Small’s excellent tutorial on the Facebook Roon User’s group page that I mentioned at the beginning of this article. The hardest part is waiting on all the parts to arrive. Also, while you could opt, right from the get-go, to tweak and upgrade your Pi, I’ve found a good part of the audiophile fun with a Pi system is gradual upgrades based on actual listening. Do power supplies have an audible effect on a Pi system? Some do; some don’t. Whether a particular change makes an audible difference depends on your system’s electronic and physical environment. Just like old-school audio, some things never change, and some things can change a lot. You only find out your own truth through listening.

Tags: BUILD YOUR OWN DIY STREAMER