All three of the gentlemen I’m going to introduce you to are master craftsmen of the highest reputation in Japan. With the possible exception of Mr. Ikeda, whose Fidelity Research products were very well known (and well regarded) worldwide in the eighties, none of them is a household name in the U.S. (at least in high-end-audio households). Judging from what I heard, each of them should be.

My first stop (with Yujean and Yvonne Kang of Tangram Audio [www.tangramaudio.com/content.htm], importers and distributors of all Audio Tekne, Technical Brain, and Ikeda products) was the Audio Tekne shop in Hachioji (a suburb of Tokyo), where I met Mr. Kiyoaki Imai, the extraordinarily gifted designer of all Audio Tekne products, Mr. Imai’s son Hironobu, his wife Tomiko, and, as I was soon to discover, an extended family of Mr. Imai’s friends and clients who own and swear by Audio Tekne equipment.

Like William Zane Johnson of Audio Research here in the U.S.,  Mr. Imai is a doyen of handcrafted tube amplifier and preamplifier designers in Japan. Indeed, one of the many enticements for going on this trip was the chance to hear Mr. Imai’s now-$150k TEA-9501 dual-mono phonostage preamplifier (first picture to the left below), his top-of-the-line one-hundred-and-twenty-pound $60k TFA-9501 linestage preamplifier (second picture to the left below), and his $75k eleven-watt-per-channel TM-9502 monoblock power amp, which uses Mr. Imai’s favorite output tube, the 6AS7G dual-triode (also favored by Ralph Karsten in his Atma-Sphere OTLs) run push-pull in Class A1. (Mr. Imai also makes other 6AS7G and 300B-based integrated, stereo, and monoblock power amps.) 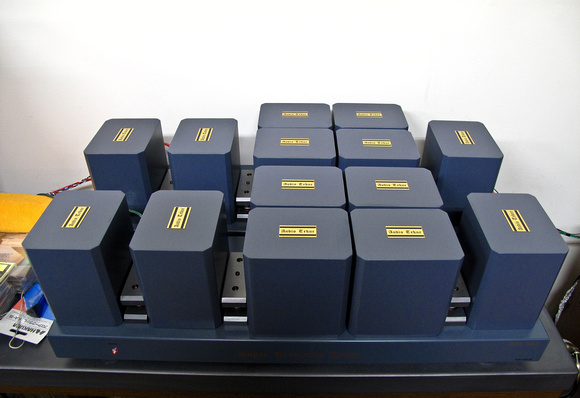 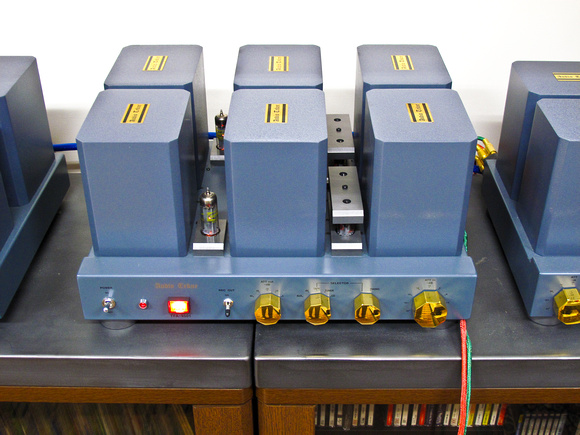 Naturally I brought records and CDs with me, so I got the chance to hear the phonostage, the preamp, and the monoblocks with music I was very familiar with. As an added bonus, I also got to hear my LPs played back on Mr. Imai’s record-playing system, the $52k ACP-8801 with air-bearing turntable, pivoted arm, and Audio Tekne MC-6310 phono cartridge (third picture to the left below)—a device so immune to vibration that I actually watched, in some horror (since it was one of my discs on the platter), Mr. Imai slam a heavy rubber-coated mallet onto the tonearm standard, the plinth, and—with my heart in my throat!—the record clamp while the record was playing! I heard nothing through the speakers (and these were, as you will soon find out, horn loudspeakers), save for a very-low-level “thunk.” The tonearm never skipped a beat! I’ve seen ’tables and arms that I thought were relatively vibration-proof before but never anything like this! 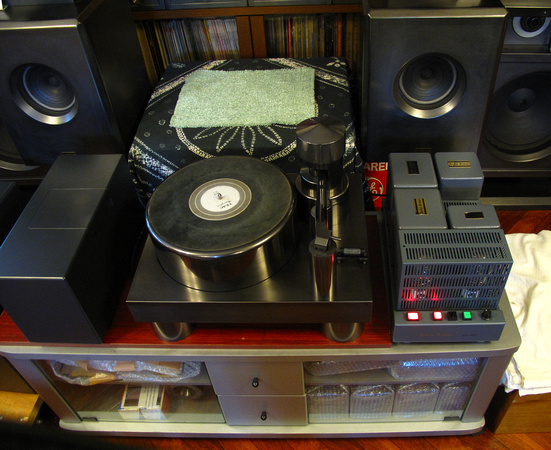 Of course, none of this would matter if the sound hadn’t been superb. But, of course, it was superb—on LP and CD. And in no small part because I was also listening through Mr. Imai’s loudspeakers.

Although I knew about the electronics and the turntable, I didn’t know that Mr. Imai also made speakers. But this Renaissance man doesn’t just make discrete parts; he makes entire systems—from the copper-Litz cables and interconnects I blogged about (see http://www.avguide.com/blog/affordable-cable-thats-good-the-high-priced-stuff) to a super moving coil phono cartridge to record mats and clamps to carbon-graphite support mechanism.  Perhaps I should have guessed about the loudspeakers, since Audio Tekne’s motto (and Mr. Imai’s gear certainly lives up to it) is: “[When you stop] listening to sound you will listen to music.”

Although I later heard all of these items at Mr. Imai’s delightfully crowded shop, I first heard his entire top-of-the-line system—from ‘table to speakers—in the listening room of Isamu Fukumoto. 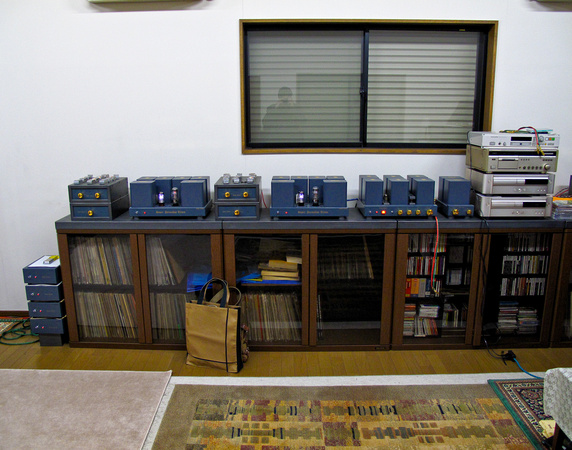 The room was simple and beautiful, as the rooms in all Japanese homes are, but unlike most Japanese rooms it was quite large with a vaulted ceiling. Mr. Fukumoto had all of the top-line Audio Tekne electronics (including the TEA-9501 dual-mono phonostage!) arrayed on a record/CD cabinet along the long wall.

On the front wall were his speakers—and what speakers!

Mr. Imai builds different kinds of loudspeakers (and various levels of each), from a full-range single-driver bookshelf model to the horn-loaded, four-way,  $150k SP-9301S that Mr. Fukumoto uses.

All of Mr. Imai’s horns and cabinets are made of carbon-graphite; he uses only the best drivers—from the Japanese ultra-high-end manufacturing firm Ale—the owners of which, being close friends of Mr. Imai, design to his specifications. (Alon Wolf also uses Ale drivers in his Ultimate loudspeaker.) Ales are incredibly good and incredibly expensive drivers (the pair of midrange compression-drivers pictured to the left below, which in the SP-9301S cover the octaves from 200Hz to 3kHz, cost $65k as raw parts!).

In addition to the Ale midrange, Mr. Imai uses an Ale horn-loaded compression-driver tweeter for the octaves from 3kHz to 10kHz, an Ale horn-loaded compression-driver supertweeter for the octaves from 10kHz to well above 20kHz, and a fifteen-inch Ale woofer in a large, ported carbon-graphite enclosure for the bass octaves below 200Hz (second picture to the left below). In the third picture to the left below you get a side/rear view of the large midrange horn and the two smaller high-frequency horns. 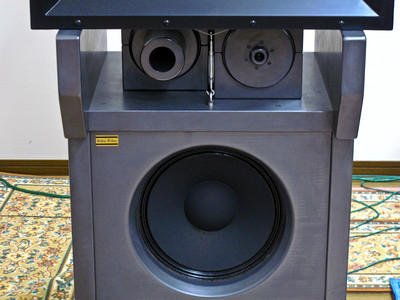 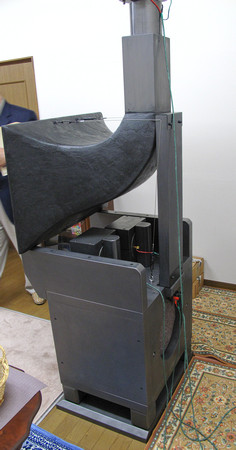 I could go through my listening notes for Mr. Fukumoto’s system, but they would all read the same: The sound was sweet, coherent, dynamic, tremendously detailed, and less like a horn speaker than any horn speaker I’ve ever heard (and I’ve heard a few). On a torture-test like Bozay’s “Improvisations for Zither”—which is like the zither-version of Jimi Hendrix’s “Star-Spangled Banner”—timbre, attack, sustain, and decay were wondrously realistic, as was the reproduction of space and air. Having heard the SP-9301S reproduce Dean Martin’s voice on CD (in Mr. Imai’s own system) with greater presence and in-the-room-with-you realism than I’ve heard from this disc, I have the distinct impression that this is a genuinely great speaker—one I would love to review. Having recently written up the best ‘stat I’ve ever heard (the MartinLogan CLX), the best ribbon I’ve ever heard (the Symposium Acoustics Panoramas), the best omni I’ve ever heard (the MBL 101 X-Treme), and (soon) the best dynamic (and, perhaps, best overall) speaker I’ve ever heard (the Magico M5), getting a shot at the best horn system I’ve ever heard would square the circle—and the Audio Tekne SP-9301S (sourced, driven, and harnessed by Audio Tekne) is the best I’ve heard. 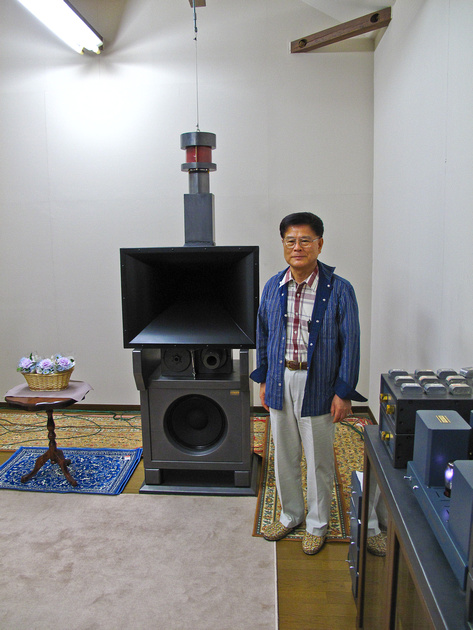 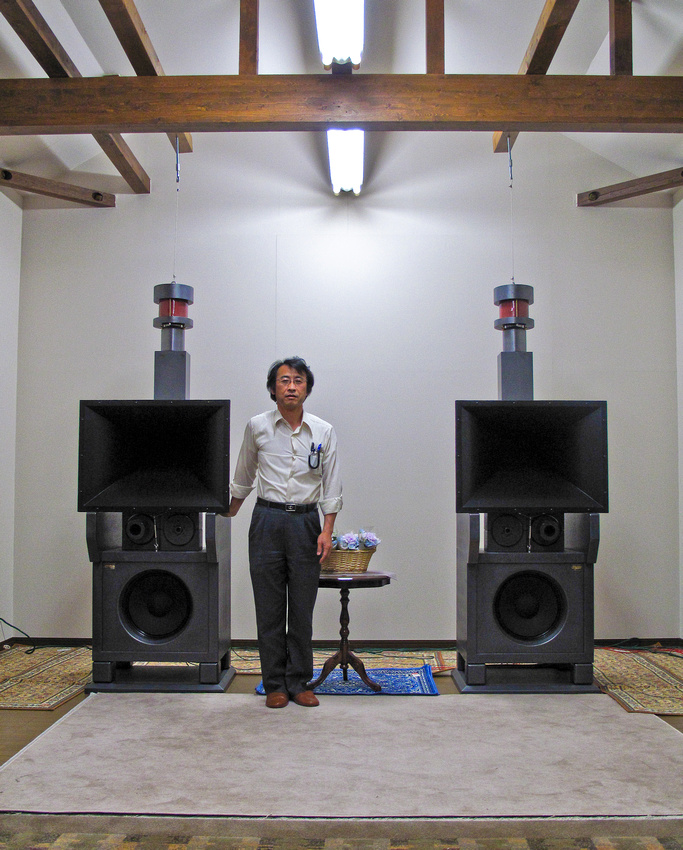