Not all of Mr. Imai’s Audio Tekne systems cost small fortunes, although, outside of his tweaks and incredibly reasonably priced cables and interconnects, they do tend to be pricey, as handcrafted works of applied art always are). In Taro Hirayama’s exquisite mountainside home about forty minutes outside of Hachioji I got the chance to hear a somewhat more modest Imai system. (Just as an aside, the Japanese countryside is every bit as beautiful as the American West, although its mountains, being older and lower, generally aren’t snow-capped—save for Fuji. Distinctively spearhead-shaped and densely timbered all the way to their tops, they seem—like everything else in Japan—somehow more formal and artistic than our rugged inverted-V-shaped mountains, more like the ink-drawn mountains of a Japanese print.

Like so many of Mr. Imai’s clients and friends, Mr. Hirayama (pictured to the left below) is intensely musical. Indeed, he spent his working life as a jazz bassist and a glowing doublebass and upright piano decorate his exquisite listening room, with its music stand looking out on a gorgeous sun-drenched Japanese garden. 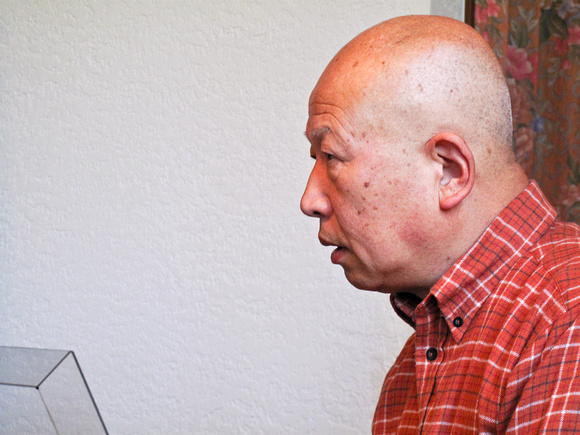 Like so many Japanese music lovers, Mr. Hirayama uses horn loudspeakers—in his case Altec 311 sectoral horns atop an Altec bass horn. Both Altec drivers have been heavily modified by Mr. Imai and one of Mr. Imai’s Ale compression-driver tweeters has been added to the duo (see photo to the left below). Like Mr. Fukumoto (and all of Mr. Imai’s clients, for that matter) Mr. Hirayama uses a turntable in addition to a CD player—a Micro Seiki, which seems to be the favorite of those who don’t own Mr. Imai’s air-bearing record player and which, in passing, is also the favorite ’table of the world-famous tonearm and cartridge-builder Mr. Ikeda. (It is a genuine pity that these much-celebrated Micro Seiki ’tables are no longer being made.) 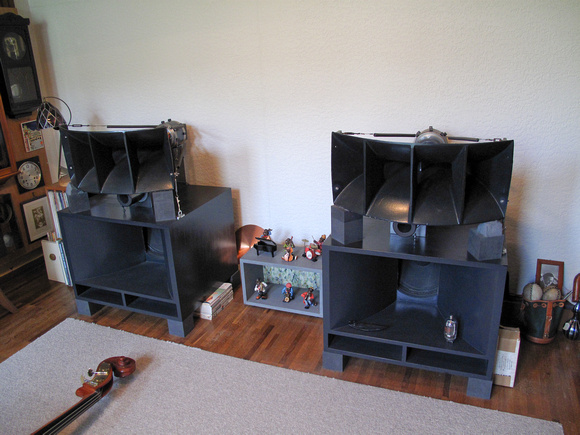 Mr. Hirayama’s Audio Tekne electronics are housed in a record cabinet on the wall to the right of the speakers. To drive his Imai-modified Altecs, Mr. Hirayama uses a quartet of $40k/pair, 15Wpc Audio Tekne TM-8801 300B-based push-pull monoblocks, run in Class A1 (see photo to the left below). 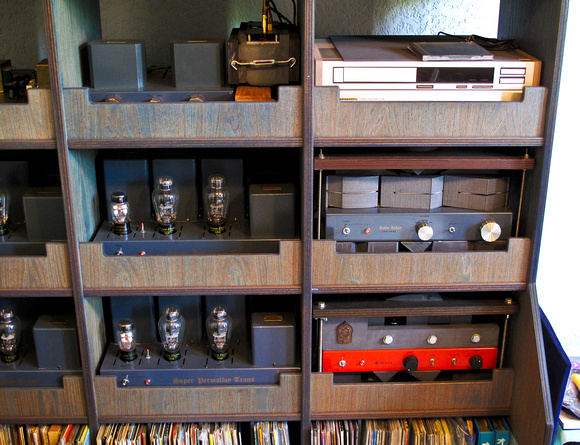 As for sonics, I can honestly report (a bit to my surprise given past experience with Altec horn-loaded loudspeakers) that on small-scale music like the Prokofiev First Violin Sonata (with Nadia Salerno-Sonnenberg and Sandra Rivers), the system was truly gorgeous—rich, warm, diaphanous, detailed, far and away the most lifelike and beautiful I’ve heard any “Altec speakers” sound. Though overall these modified Altecs were a bit more like horns than Mr. Imai’s four-way SP9301S’s on larger-scale music (where a bit of “cupped hands” coloration crept in), they were simply superb on intimate stuff. I could live with ’em, but then I could probably live with any speaker in Mr. Hirayama’s beautiful little house.

After we left Mr. Hirayama, we stopped a few houses up the hillside to visit Mr. Matsuzaki (pictured in the photo to the left, below). Mr. Matsuzaki is a world-class cabinet-maker who builds all of the enclosures for Mr. Imai’s speakers and for many TAD products, among others. (He also still makes enclosures for JBL Paragons!) 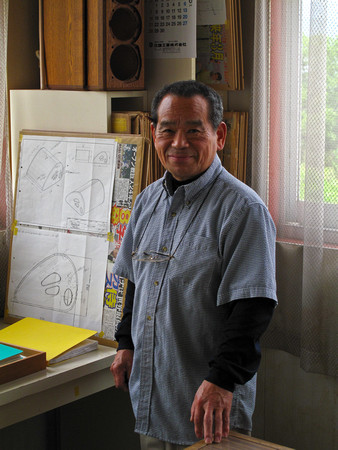 Mr. Matsuzaki’s workshop, where he handcrafts his enclosures, is in the back of his home. Like everything in Japanese high end, his creations look as much like art as appliances. (See the second photo to the left, below.) 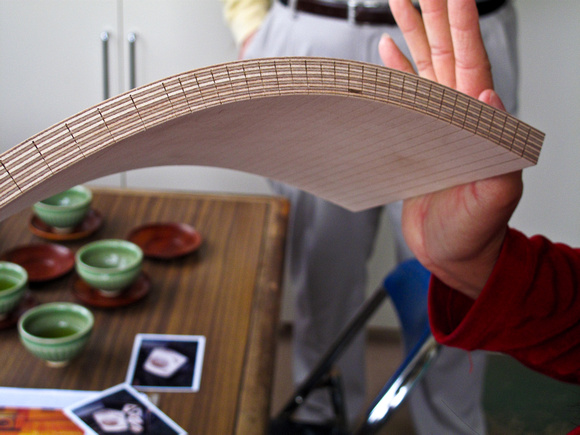 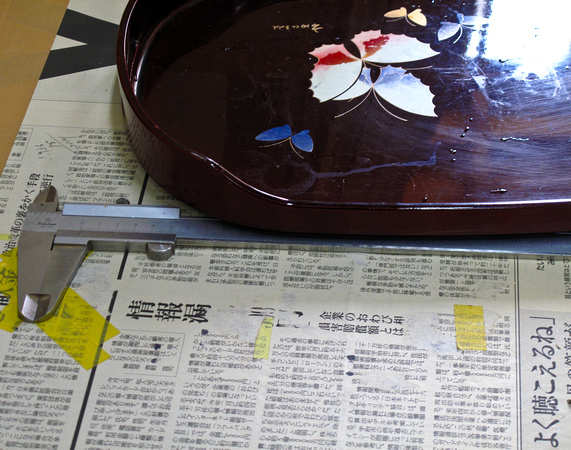 From Mr. Matsuzaki’s house, we traveled back toward Hachioji to visit Mr. Takashi Nemoto and listen to his $23k Audio Tekne SP-8716 loudspeakers, full-range, pedestal-mounted, single-driver loudspeakers housed in one of Mr. Matsuzaki’s carbon-graphite enclosures with 6.5-inch Ale mid/woofs and, in this case, what Mr. Imai calls his “middle class” Ale compression-driver tweeters mounted on top. (Below and to the left you should see a photo of these speakers, with Mr. Nemoto standing between them.) 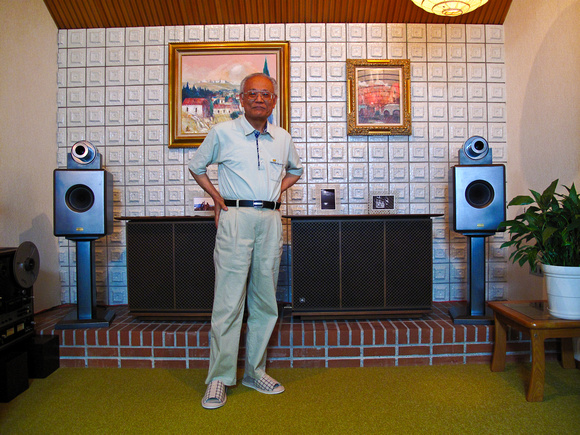 Mr. Nemoto had an excellent room, paneled in wood and acoustic tile, which clearly helped make the 8716s topped with their Ale tweeters sound fabulous. The tweeters integrated beautifully with the full-range Ale drivers. On everything from my old standby “Rainy Night in Georgia,” to Dean, Frank, and Bing harmonizing on “Style,” to the Rach 3, the presentation was clear, sweet, and lifelike. The low bass lacked a little punch, but then what can you expect from a 6.5-inch driver? Outside of that there wasn’t much to take issue with.

Mr. Nemoto was using the same Audio Tekne phonostage that I’ve extolled in TAS—the $12k TEA-2000—along with Audio Tekne’s $20k LT-9501 CD line transformer (which does wonders with any DAC) and Mr. Imai’s $28.5k TFM-9412, an 8Wpc 300B-based integrated amp. I heard a 6AS7G version of this same integrated sound flawlessly great in Mr. Imai’s shop with his four-way SP-9301S speakers. Indeed, it was my final listen in Mr. Imai’s store that confirmed for me that the SP-9301s are something extraordinary. But by then I was pretty well convinced that everything that Mr. Imai makes is extraordinary—speakers, amps, integrateds, linestages, phonostages, turntables, and everything else.

Before moving on to Mr. Naoto Kurosawa and Technical Brain’s equally extraordinary solid-state products, let me close this section with a photo I will cherish of all of us—Yujean Kang, me, Hironobu Imai, Tomiko Imai, Yvonne Kang, my wife Kathy, and Kiyoaki Imai—inside the beautiful Ohtejan restaurant. More than the audio gear, it is the hospitality of these wonderful gifted people I will remember most fondly. 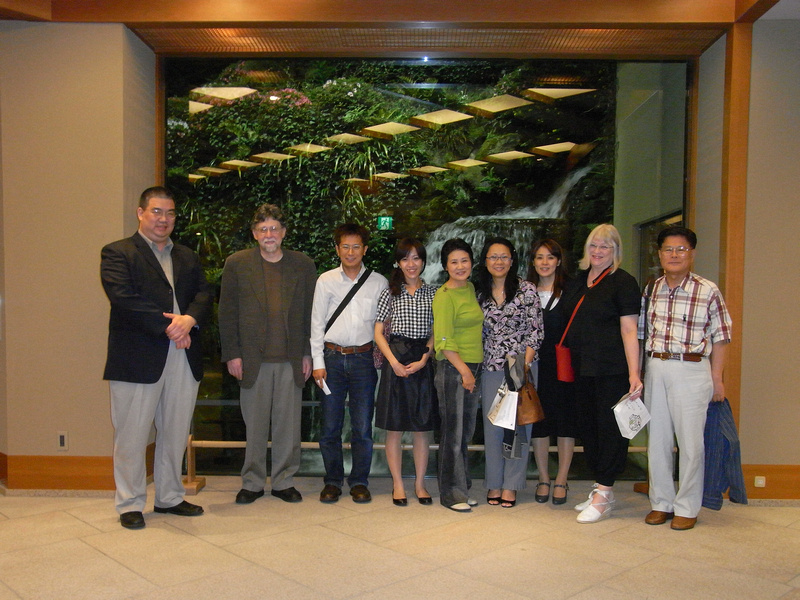