Before I left for Japan I knew that Audio Tekne products would prove to be extraordinary; after all, I’ve been living with Mr. Imai’s $12k TEA-2000 phonostage, his $3k ALT-8905 AC line transformer (into which the TEA-2000 plugs), his $550 ARA-500 RCA interconnects, and his $575 ARSP-500 speaker cables for more than a year. But Technical Brain? A company with the name of a villain out of a Batman comic book? That I knew nothing about, save that its reputation for sonic excellence was extraordinarily high in Japan (like Mr. Imai, Technical Brain’s Naoto Kurosawa has won highest honors from every major Japanese audio magazine).

From the outside Mr. Kurosawa’s shop didn’t tell me much, either. Indeed, its log-cabin-like build and its quaint sign that reads “Audio and Coffee” did little to mitigate the vaguely comic book feeling I got from the company’s name. But, as it turned out (and probably always turns out in Japan), everything had its reason. The giant logs used to construct the building were imported Canadian timber which Mr. Kurosawa chose specifically because it sounds good; the coffee, served in a little shop to the left of the audio store, was great and added just the right touch of relaxation, as if to say that this high-end audio business is to be experienced as one of life’s enjoyments and not as something separate and sacrosanct. Even the company’s name, Technical Brain, had its point, for Mr. Kurosawa is a genuine technical whiz and his $58k TBP-Zero ver.2 monoblock power amplifiers (pictured above in a beautiful genuine piano-black Urushi lacquer finish that’ll put you out an extra 10,000 semolias over the stock brushed aluminum finish) and TBC-Zero preamplifier use unique patented circuits that eliminate emitter resistors and any mechanical contacts, relays, or line fuses. 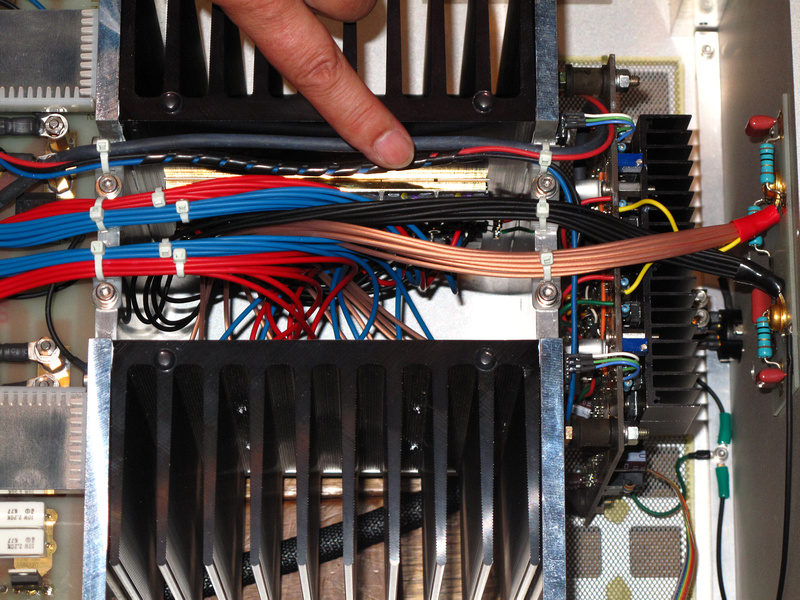 With special hand-wound flat-coil fifty-pound transformers (see photo below) that have very low magnetic flux density and meticulously matched bipolar transistors in a chassis in which all wiring and components are painstakingly laid out to eliminate noise and vibration (see photo above), the fully-balanced, non-servo TBP-Zero ver.2 achieves megahertz bandwidth with no group delay from DC to 500kHz, a rated output of 350W into 8 ohms (700W into 4 ohms, and 1400W into 2 ohms), peak current of over 100 amps, a damping factor of over 550, and distortion less than 0.02% maximum into 8 ohms at full rated power from 20Hz to 20kHz. (Mr. Kurosawa also makes a superb stereo amp, the $29k TBP-Zero/S, that boasts similar specs and sonics.) 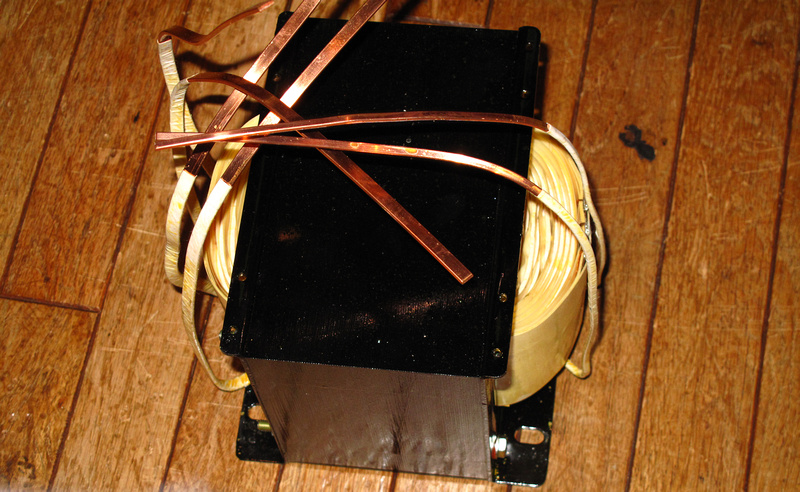 The $33k Technical Brain zero-feedback TBC-Zero preamp—which also uses Mr. Kurosawa’s patented circuitry that eliminates emitter resistors, any mechanical contacts, relays, or lines fuses—is just as impressive, technically and sonically. With a bandwidth of DC to 500kHz, no feedback, distortion of less than 0.02% maximum from 20Hz to 20kHz at 5V RMS output, the TBC-Zero, like the TBP-Zero ver.2, lives precisely up to Mr. Kurosawa’s motto: “Exceptionally high in transparency, low in coloration…a truly natural sound. 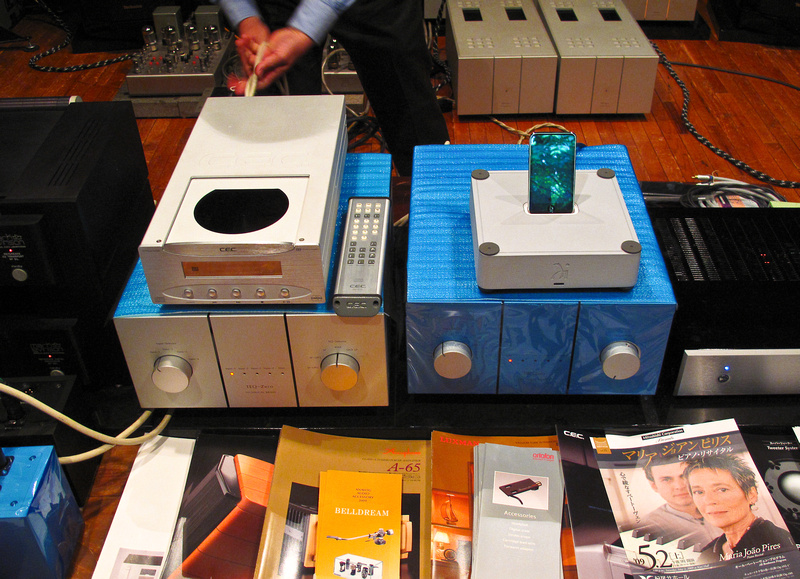 Build-quality and craftsmanship on both amp and preamp are phenomenal. And the sound…well, if there was a scoop on this trip it was the sound of the Technical Brain amps and preamp, which was phenomenally good—along with Soulution, quite possibly as good as I’ve ever heard from solid-state: transparent without a touch of the antiseptic, neutral without a hint of chill or darkness or excess warmth, incredibly finely detailed, incredibly dynamic, incredibly lifelike from top to bottom. A light, poise, and balance, for all the world, like Audio Research in transistor garb.

Shrewdly, Mr. Kurosawa has equipped his listening room with a wide variety of speakers of every kind—from dynamics to ‘stats to ribbons to horns—so I got a chance to listen to his electronics on just about every kind of transducer extant (with both LP and CD sources). Clearly the Technical Brain products are anything but picky when it comes to what they drive. In fact, the very best sound I heard in Japan (right alongside that of the all-tube Audio Tekne electronics driving Mr. Imai’s SP-9301S four-way horns) came from the Technical Brain solid-state amp and preamp driving what is, famously, one of the most difficult loads on earth: Apogee Duettas. One forgets how great Jason Bloom’s ribbon speakers were, and I’ve never heard them sound more realistic, more like the absolute sound than I did in Mr. Kurosawa’s Canadian-timber listening room. Reproduced sound may get different but it doesn’t get better than this. 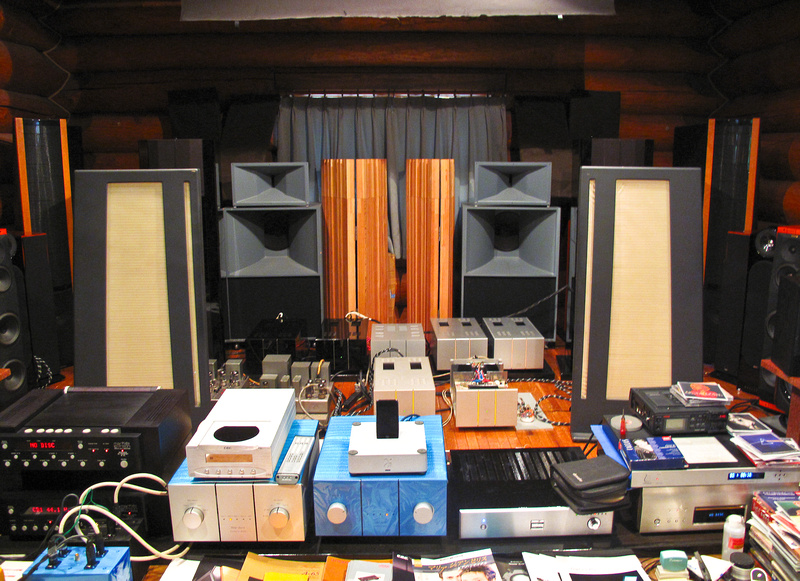 Like Mr. Imai’s all-tube Audio Tekne products, Naoto Kurosawa’s all-solid-state Technical Brain line represents the very best that Japanese high-end audio is capable of. And I am here to tell you that this best competes fully with the best I’ve heard from any company anywhere in the world. Mr. Kurosawa looks happy in the picture below, in which he shows me for the first time his TBP-Zero ver.2 power amp. He has every reason to be happy—and proud. If my luck holds, I will be reviewing his electronics in the not-too-distant future. Frankly, I can’t wait. 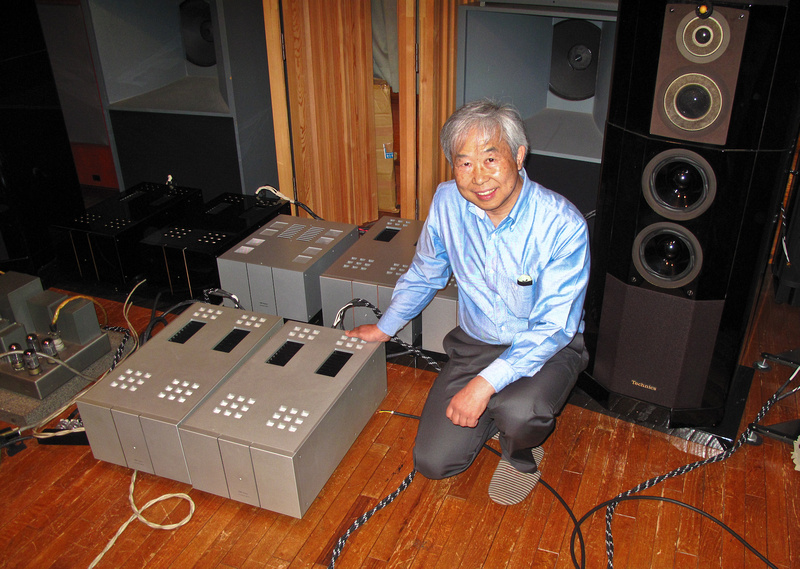