One of the first things Osamu Ikeda asked me when we met—and it wasn’t the first time that the question of age, mine or theirs, was brought up by these Japanese craftsmen—was, “How old do you think I am?”

Being from the United States, where aging is viewed with something like shame, I answered tentatively. “Seventy?” I said, even though I knew he was considerably older than that.

“Eighty-three,” he replied with pride. “I have been making cartridges for sixty years.”

Ever since the end of the Second World War, Mr. Ikeda has been making phonographic equipment. The moving-coil cartridge in Japan can almost be said to be his invention—and virtually every one of the great Japanese cartridge-makers apprenticed under him.

From the mid-sixties through the early eighties, cartridges like the FR 1 and MC 201 and tonearms like the FR 12, FR 14, FR 64, and FR 66 from Mr. Ikeda’s company Fidelity Research achieved international acclaim. He pioneered the use of silver wire, featherweight styli, yoke construction, higher-efficiency magnets which allow for coils with fewer windings, air-core coils.

Then, as we all know, came CD, and Fidelity Research (like so many other LP-playback companies) went under.

But that was not the end of the story. The ending, I am happy to say, is yet to be written. Mr. Ikeda founded his own company, Ikeda Sound Lab, were he has continued to perfect the moving-coil cartridge—an entire line of them, every one of which he himself still makes by hand.

He also continues to design tonearms: the $7200 IT-407CR1 “long” (twelve-inch) arm pictured below, which he prefers because of its lower tangency error, and the $6500 IT-345CR1 “short” (nine-and-a-half-inch) arm, both of which are built to his specifications (in Germany, I believe). Each uses a unique circular iron-bearing system. (When I asked Mr. Ikeda, who, sixty years down the road, has strong opinions on most analog subjects, why he didn’t use ruby bearings, he scoffed: “Rubies wouldn’t last more than couple of weeks. Bad material for bearings.”) 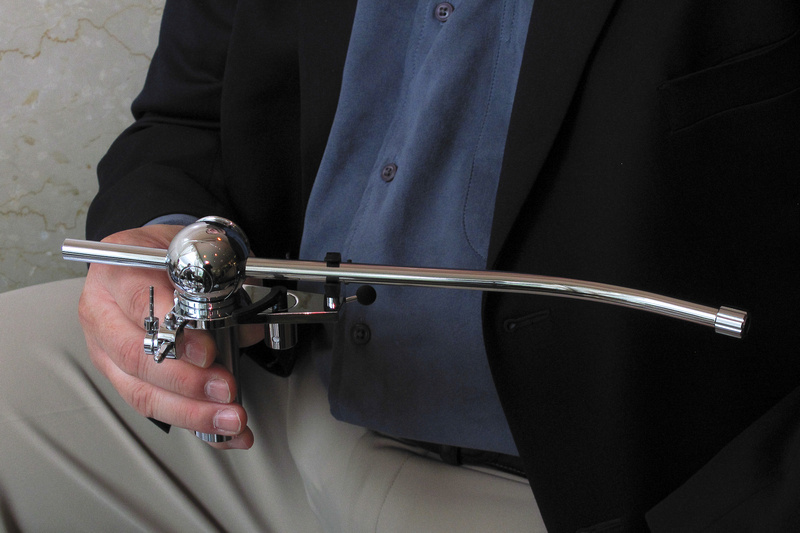 As for his cartridges…well, take a look for yourself. Pictured below is Mr. Ikeda’s top-of-the-line $7500 Ikeda Musa9 in its integral wooden headshell. 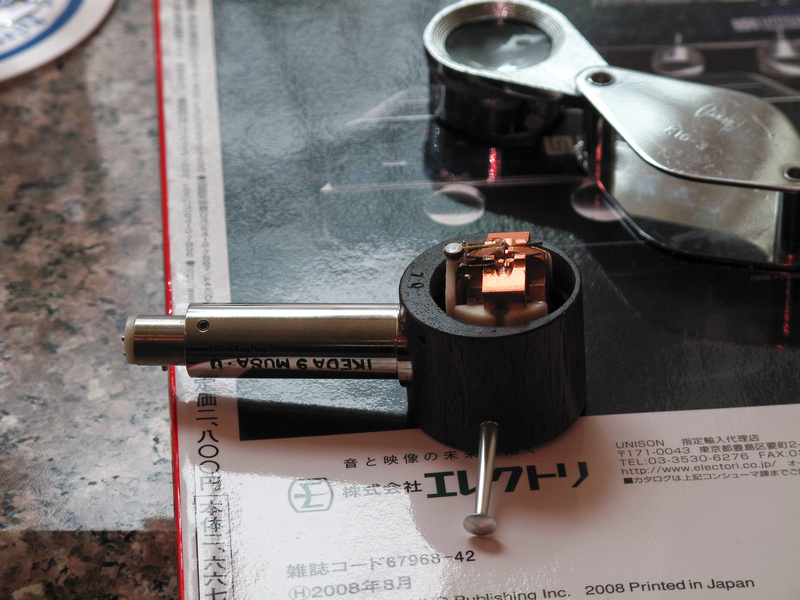 Notice anything unusual? This may be hard to see because of the magnification, but there is no cantilever on this cartridge! The stylus sits atop a tiny hemispherical yoke, like the capstone of an arch. To make this clearer I’ll print a schematic of Mr. Ikeda’s truly novel design, which he modeled on the cutter heads of mastering lathes (which also don’t use styli). 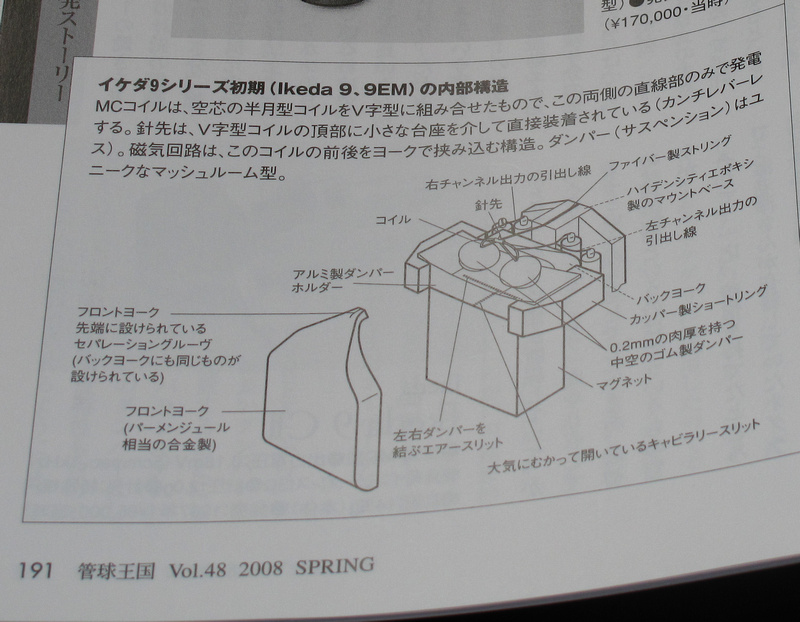 As with the London Decca cartridges, the absence of a stylus means the absence of “stylus haze”—only in this case, extraordinarily low moving mass is being harnessed to a moving-coil magnetic engine, which should guarantee exceptional resolution and dynamic life.

As you can well imagine, I was eager to hear Mr. Ikeda’s unique creation, but time constraints and previous commitments made that impossible. However, I hope to get my chance to hear a Musa9 when Yujean and Yvonne Kang of Tangram Audio import the cartridge into the country. I’m sure this return to the States will be sweet for Mr. Ikeda, who has weathered a lot of misfortune in this country.

After sixty years of hard groundbreaking work—which continues to this day—he deserves some attention paid. All of the extraordinary artisans I met and reported on while I was in Japan do. For them, high-end audio is not just work—it is life’s work. It is precisely what made my visit to Japan so enjoyable, so broadening—and so renewing.