On the weekend of 4-5 February 2017, Hi-Fi+ was pleased to attend the first ever CanJam event held in New York City, and what an event it proved to be. Held in the Marriott Marquis hotel in the heart of Times Square, CanJam NYC was one of the best-attended CanJam events to date, meaning it was an unqualified success both from the standpoint of exhibitors and of show attendees.

Importantly, the show featured a number of press events, one from the sponsoring parent organisation Head Fi.org to provide an overview and context for the event, several from manufacturers and technologists with new products or product concepts to introduce, and several from the music industry and other content creators.

During the show, I split my time between (some of) the press events and the exhibit floor. I was able to visit most though not all of the exhibitors on hand and in this report I will present a three-part photo-essay to show some of the many new products I saw and heard.

As always, I offer apologies in advance to any manufacturers I was unable to visit during the show.

The Chinese firm 1More has earned widespread accolades for its excellent and remarkably low-priced Triple-Driver earphone, which sells for just $99, but for CanJam NYC the company rolled out its brand new Quad-Driver earphone, which offers even higher levels of performance at the still modest price of $199. Like all of 1More’s top models, the Quad-Driver was voiced by studio ace Luca Bignardi. 1More’s Quad-Driver earphone sports one dynamic bass driver with DLC diaphragm, plus three balanced armature-type drivers that handle the midrange and treble workload, with one driver serving as a super-tweeter. Completing the package are OFC cables with internal Kevlar reinforcement, plus a very broad array of useful accessories. 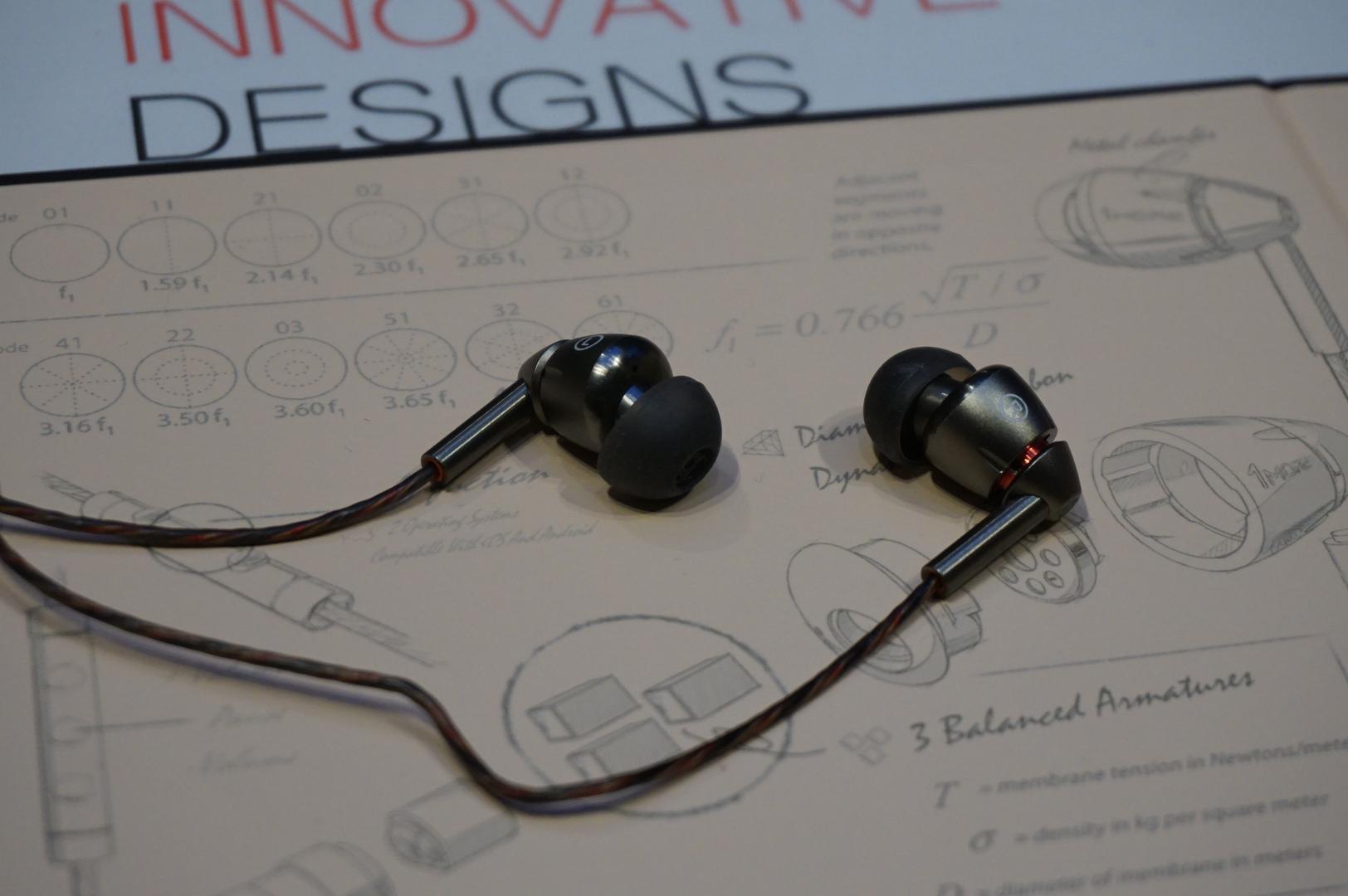 The Quad-Driver is arguably the least expensive quad-driver earphone on the market (by a considerable margin), in keeping with the firm’s stated policy of offering “disruptive pricing”. Watch for an upcoming Hi-Fi+ review of the 1 More Quad-Driver earphone. 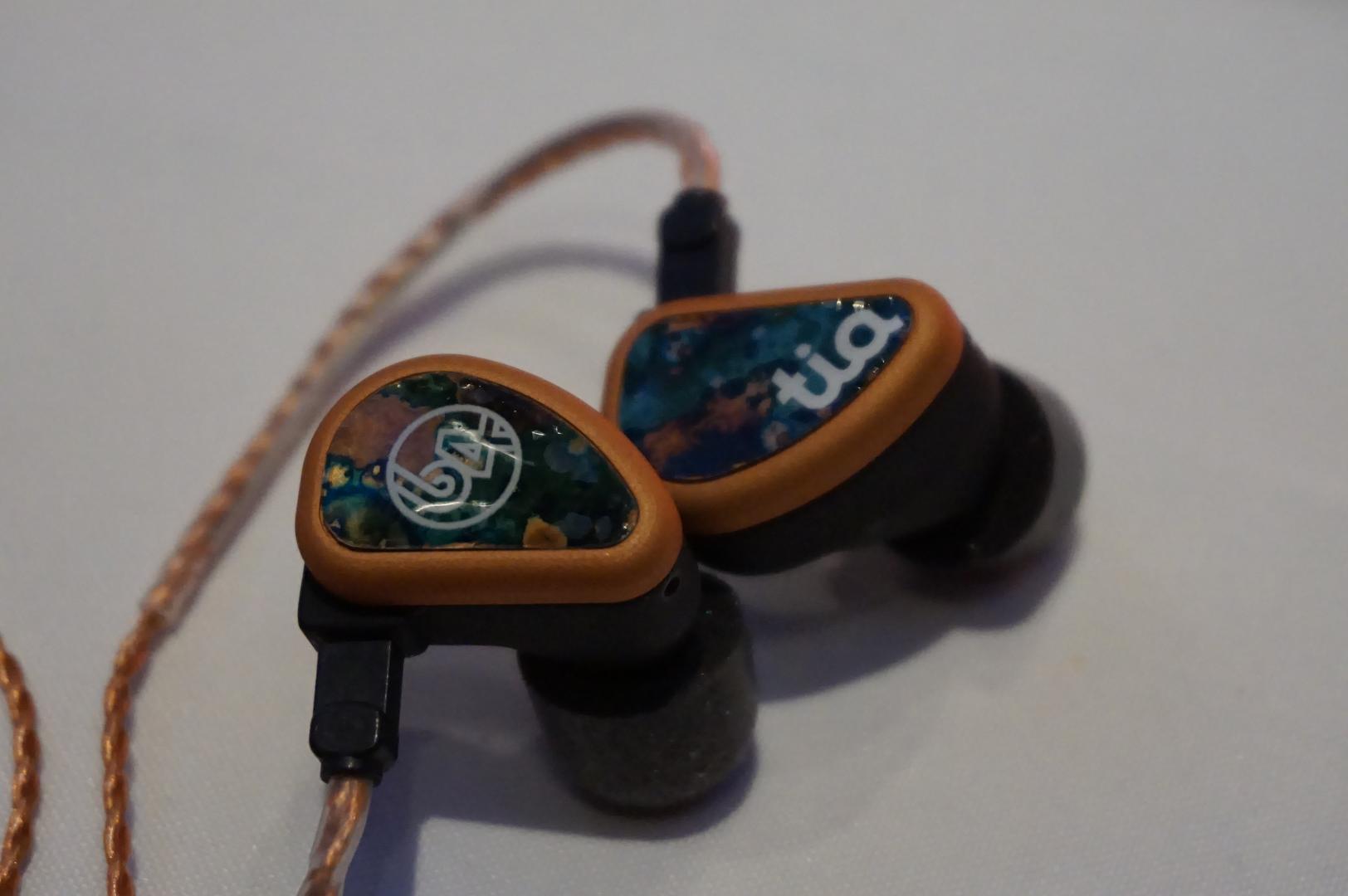 The tia Fourté features four tia-type drivers with an internal passive radiator plus an internal ‘apex’ (air pressure exchange) system, with each drive housed in an appropriately tuned chamber within earphone’s aluminium enclosure system. The result is an uncommonly natural and open-sounding earphone. 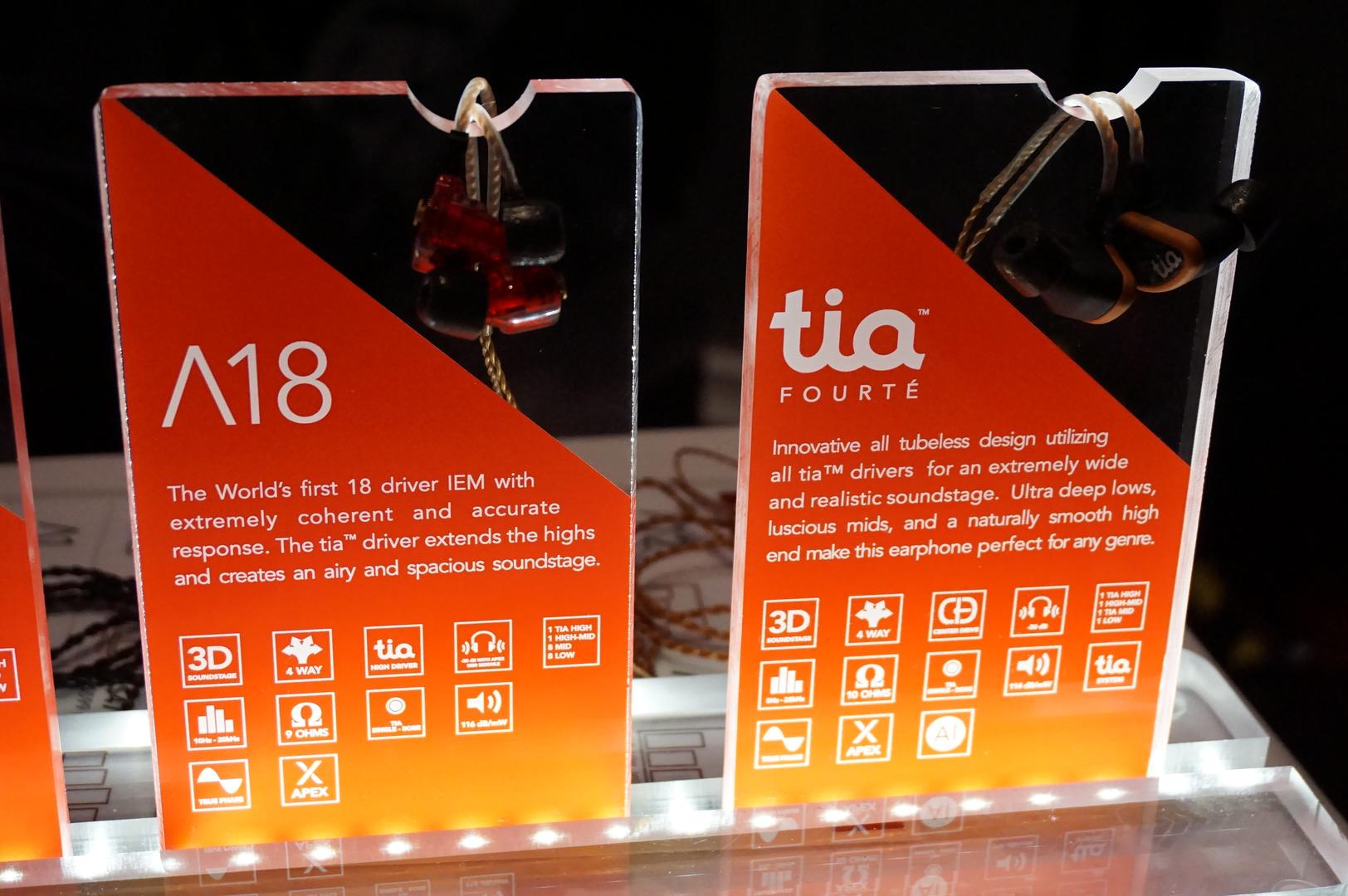 The A18 Tzar is more of a hybrid design featuring one tia-type high frequency driver, one tia-type high/mid driver, eight balanced armature-type mid drivers, and eight balanced armature-type low-frequency drivers. Like the tia Fourté, the A18 uses 64 Audio’s ‘apex’ technology, which in this instance is implemented via a capsule type module built in to outer wall of the CIEM earpiece. Apex technology is said to relieve excess pneumatic air pressure in the wearer’s ear canals, while also improving soundstaging and minimising ear fatigue. 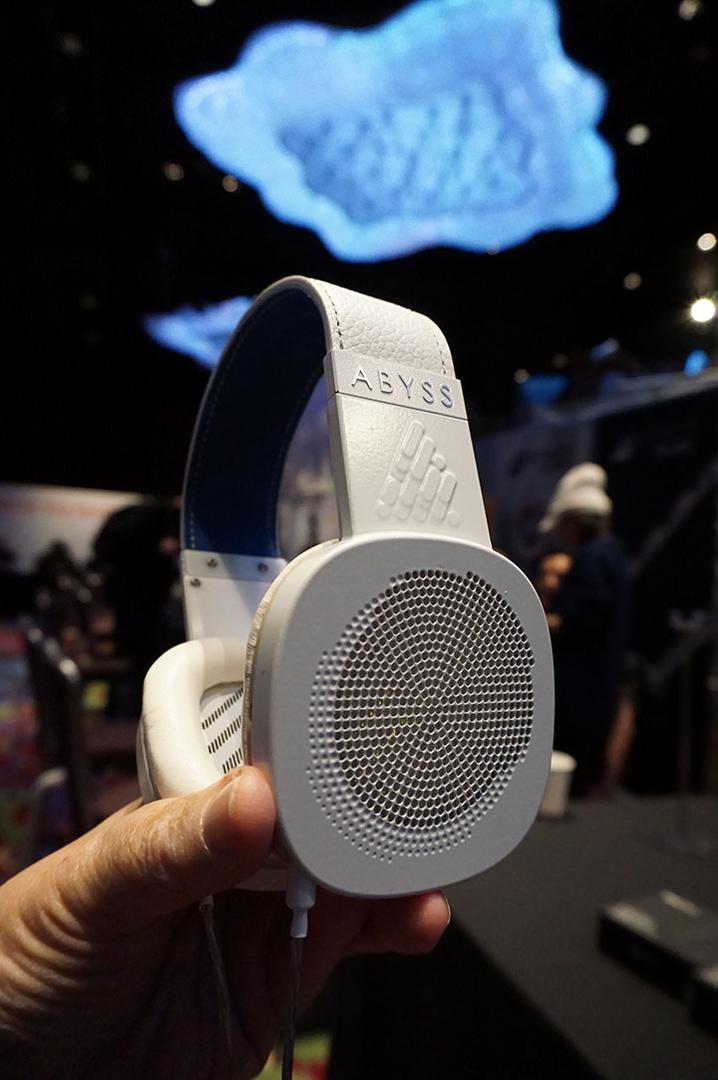 Abyss is best know for its exclusive, premium-priced AB-1266 planar magnetic headphone, but there is a new Abyss model coming: namely, the new Diana model which was on static display at CanJam NYC and that can be characterised as a ‘thin-line planar magnetic’ headphone (~$3,000). In a talk with Abyss president Joe Skubinski Hi-Fi+ learned that Abyss has only recently acquired some of the new machine tools that will be required for efficient production of the new Diana, so that it make take a while to optimise production processes and procedure for best results. We eagerly await the Diana’s arrival later this year.

In a CanJam press event, Audeze co-founder Sankar Thiagosamamudrun gave an overview of his company’s products, while discussing new directions Audeze will be taking in terms of producing a Virtual Reality-specific version of iSine planar magnetic in-ear headphone, called the iSine VR. 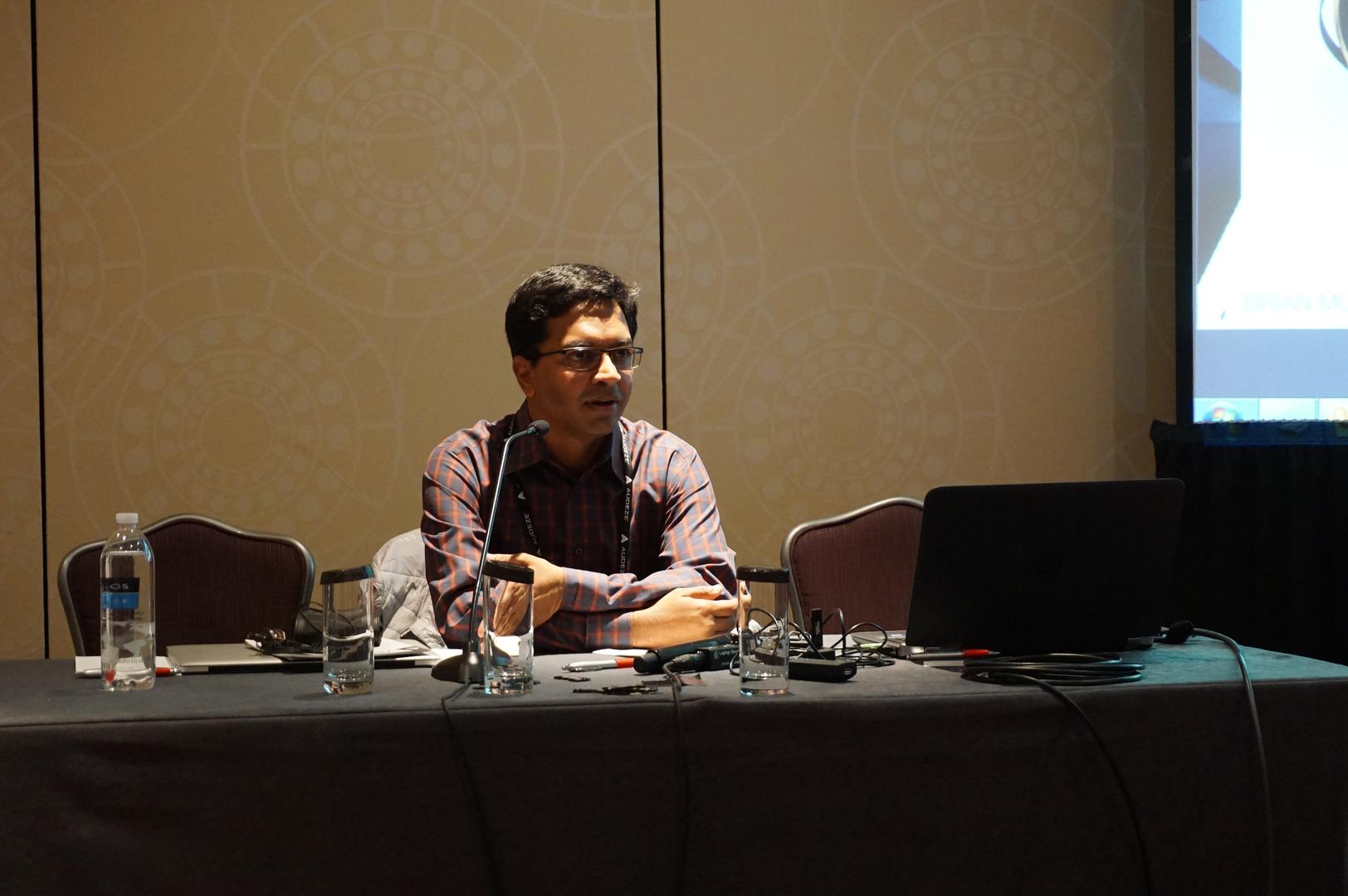 On the show floor, most of Audeze’s models were on demonstration, but the ones that most caught my eyes and ears were the iSine 20 planar magnetic in-ear (on-ear?) earphones ($599), which typically ship with the firm’s Apple-device-ready Cipher Cable—a powered cable that incorporates a built-in 24/48 DAC, a mic/ADC module, and a DSP-controlled amplifier wrapped up in one nice, neat package. 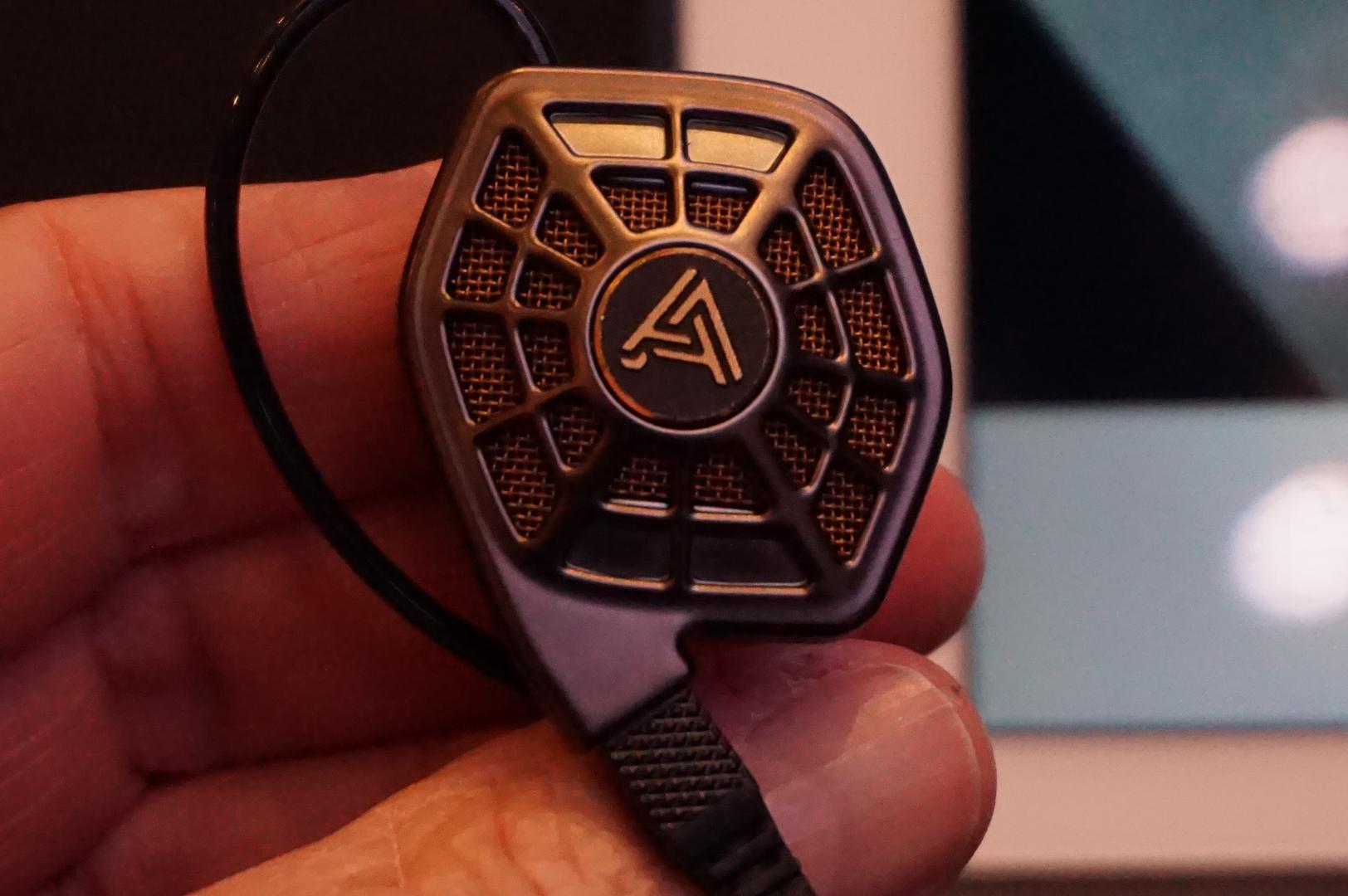 Interestingly, the iSine models are the lightest, smallest, and most affordable of all Audeze headphones, but they also claim the lowest distortion levels. Further listening is definitely indicated. 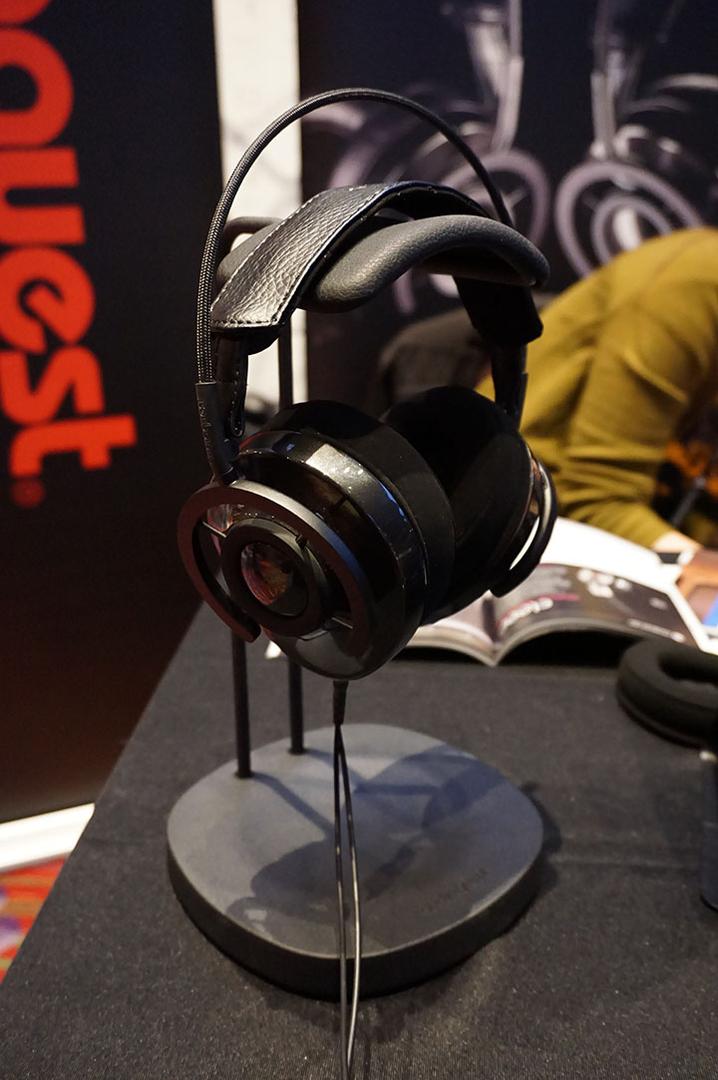 AudioQuest’s CanJam NYC demonstrations were focused on the firm’s popular DragonFly Black and Red compact headphone amp/USB DACs (priced at $99.99 and $199.99, respectively) and on the NightOwl closed back headphone, priced at $699.95. But one important though perhaps easy-to-overlook piece of hardware on display was AQ’s clever new Perch headphone stand, which makes a perfect place to store you favourite headphones when they are not in use. (Unlike many stand designs the Perch provides a large and gently curved top surface that will not put creases in the headband straps of your favourite ‘phones.) 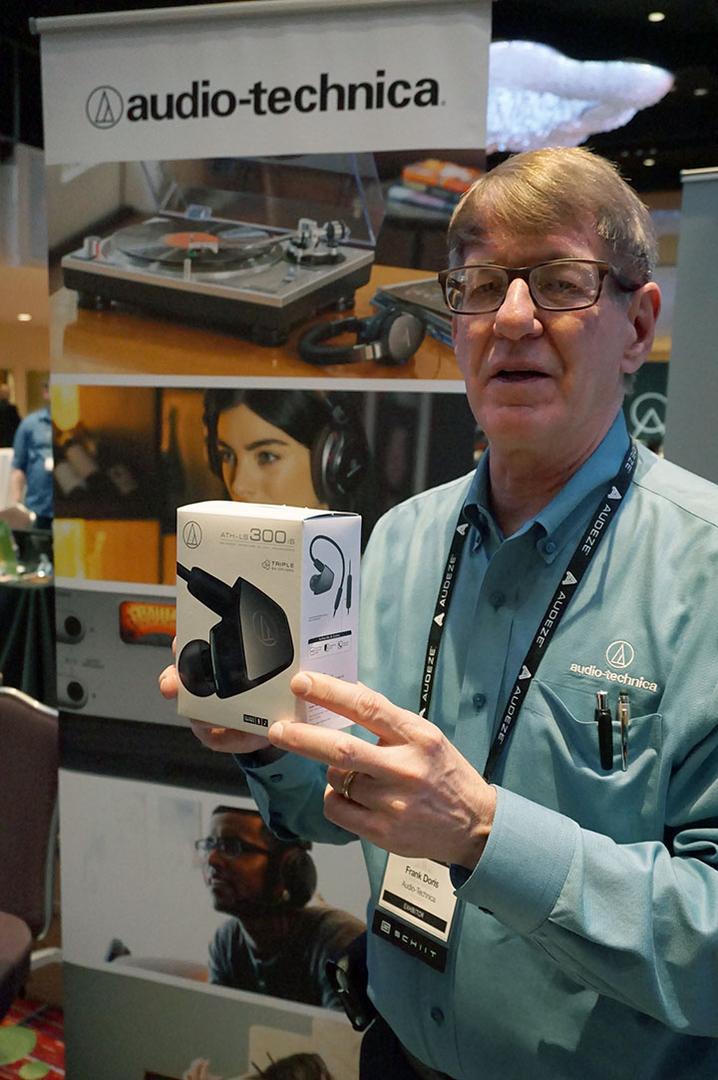 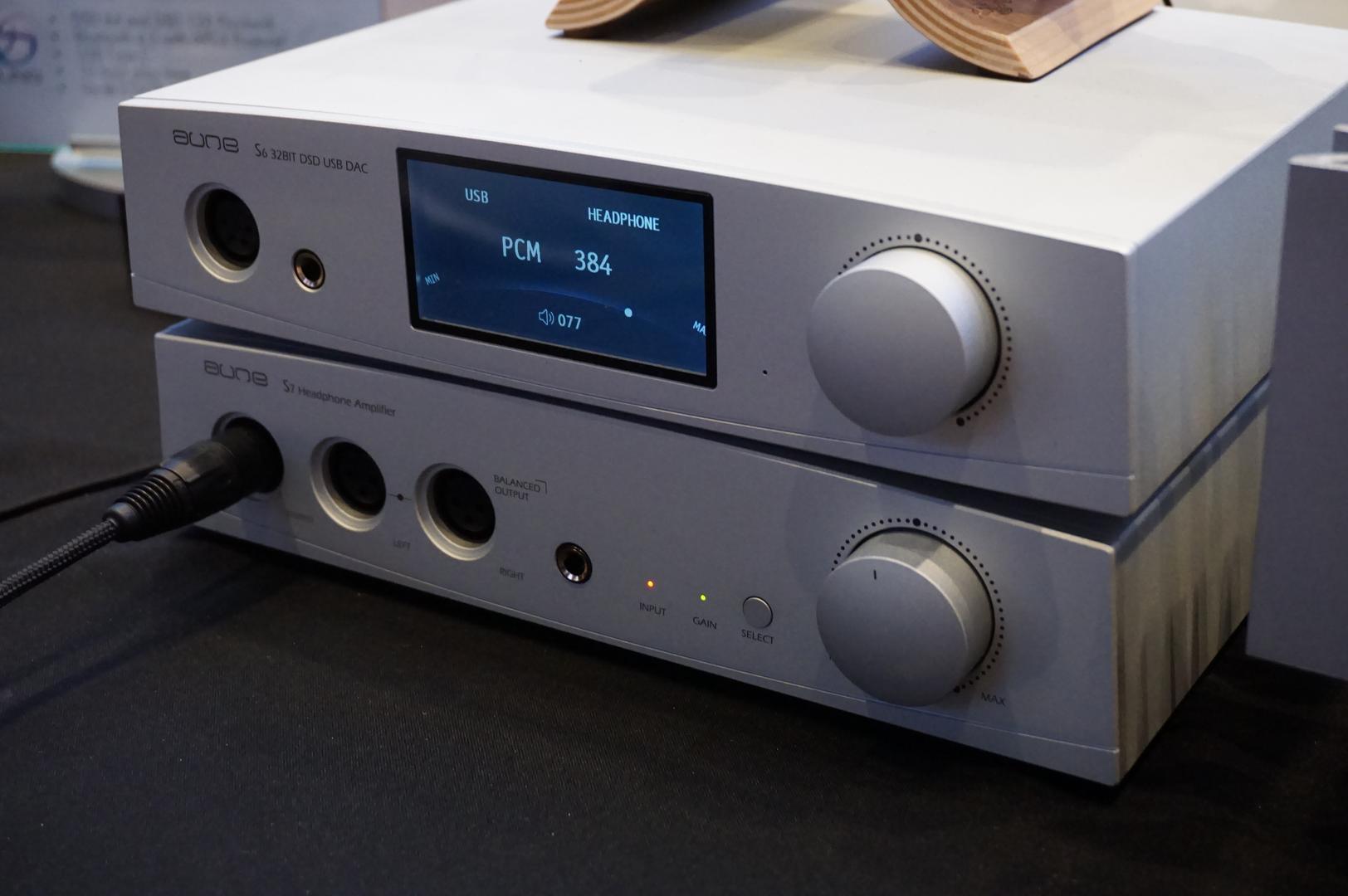 Aune (roughly pronounced “on”) is a Chinese firm dedicated to building attractive, personal audio-orientated, compact electronics components that offer huge value for money. Two good examples, as seen at CanJam NYC, were the 32/384-capable, DSD64/128 capable S6 headphone amp/DAC ($599) and the fully balanced S7 headphone amp (also $599). The key concept behind these and all other Aune models I have seen thus far is to leave customers feeling—quite rightly—that the products give more features and better performance than one has any right to expect for the money.

The clever team at Bluewave recognized that many earphone enthusiasts purchased superb earphones well before the modern-day Bluetooth audio movement gained the momentum it now enjoys today. As a result, many users want an easy-to-use and decidedly high-quality Bluetooth solution that will allow them to continue to use the earphones they already know and love. And this is where the beautiful little Bluewave Get (yep, that’s its name) portable Bluetooth receiver/DAC/amplifier comes in, and at the eminently reasonable price of $99.  The Get features a support for Bluetooth 4.2 and provides a 24/48-capable DAC supported via a CSR QualComm 8675 device. Suddenly, any earphone (or CIEM) can become Bluetooth capable at the flick of a switch. And did we mention that the Get sounds quite good, too? 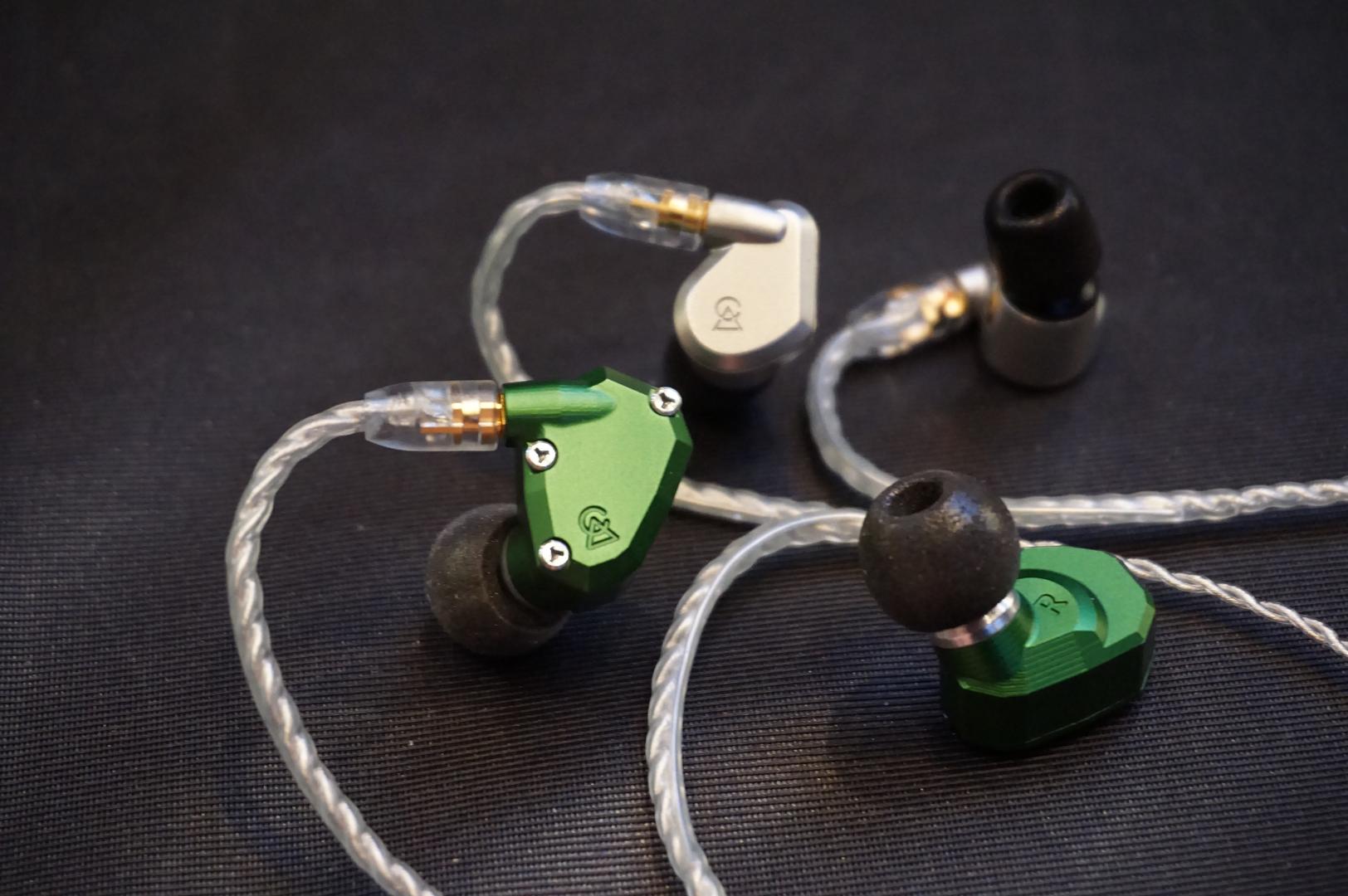 Campfire Audio, which is a spin-off of ALO Audio (see above), has steadily earned a reputation as a manufacturer of some of the world’s finest universal fit earphones. Two relatively new Campfire models seemed to be garnering the lion’s share of attention at CanJam NYC: the five-driver Andromeda universal-fit earphone ($1,099) and the all-new Vega ($1,299), which uses a single dynamic driver featuring a DLC (diamond-like carbon) coated diaphragm. I felt both models showed great promise, but the Vega in particular caught my ear with its exceptional transparency and tonal purity. 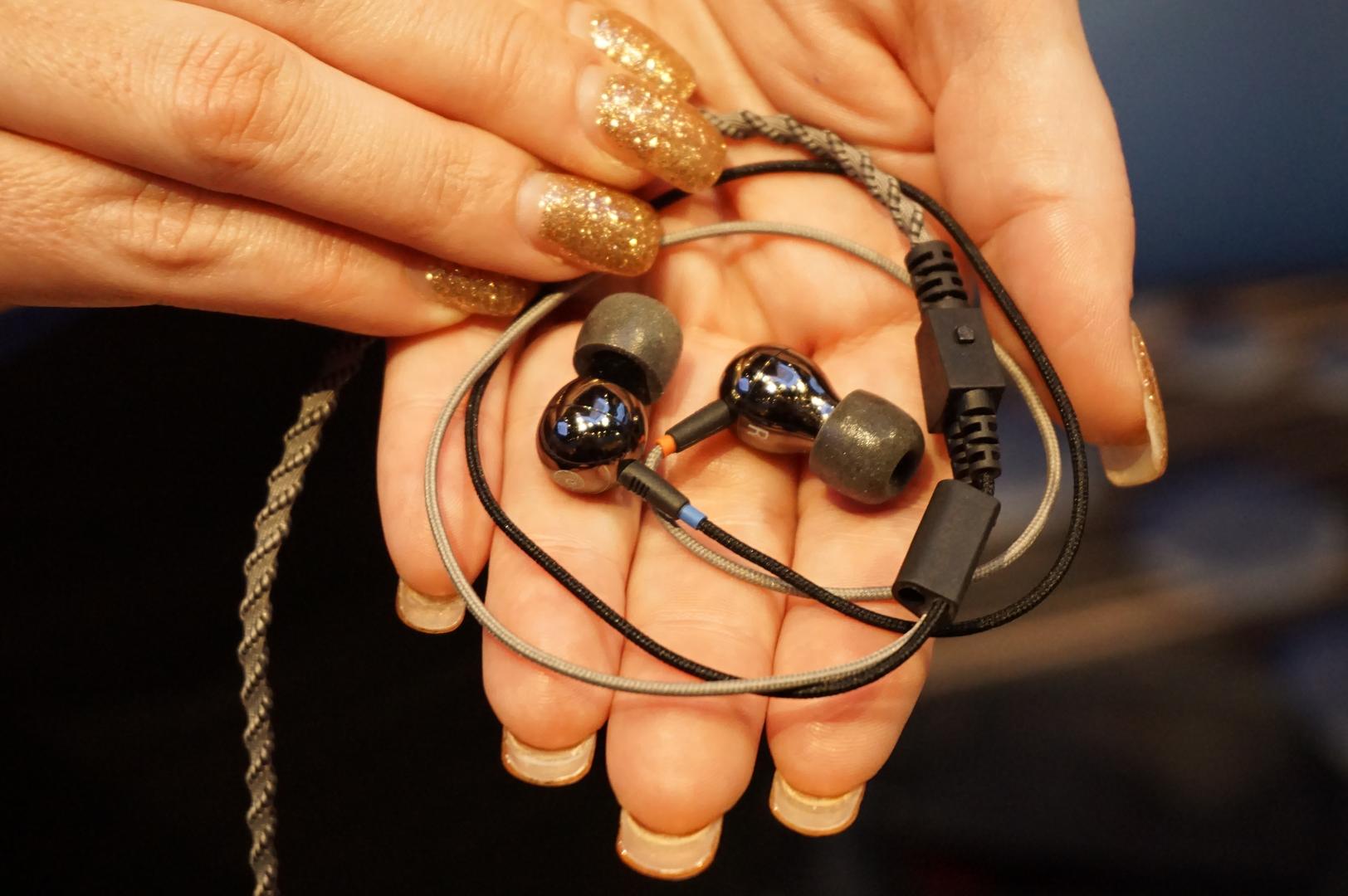 Cardas showed a new 30th Anniversary Edition of its A8 universal fit earphone ($349), where the 30th Anniversary model sports a new black chrome finish instead of the matt, rubberised blue finish of the original A8. So, users will enjoy a new look, with the time proven sound of the A8.

The Chinese firm Cayin enjoys a strong reputation for building audio components that offered great sound at a fair price. In keeping with that ethos, the firm showed its upscale IDAC6 DAC/headphone amp, which is a 32/192-capable, DSD64/128-compatible DAC that provides a valve-powered output stage and that sells for $999. In fairness, though, the IDAC6 focuses on being a fine DAC that just happens to have a serviceable headphone amp on-board. 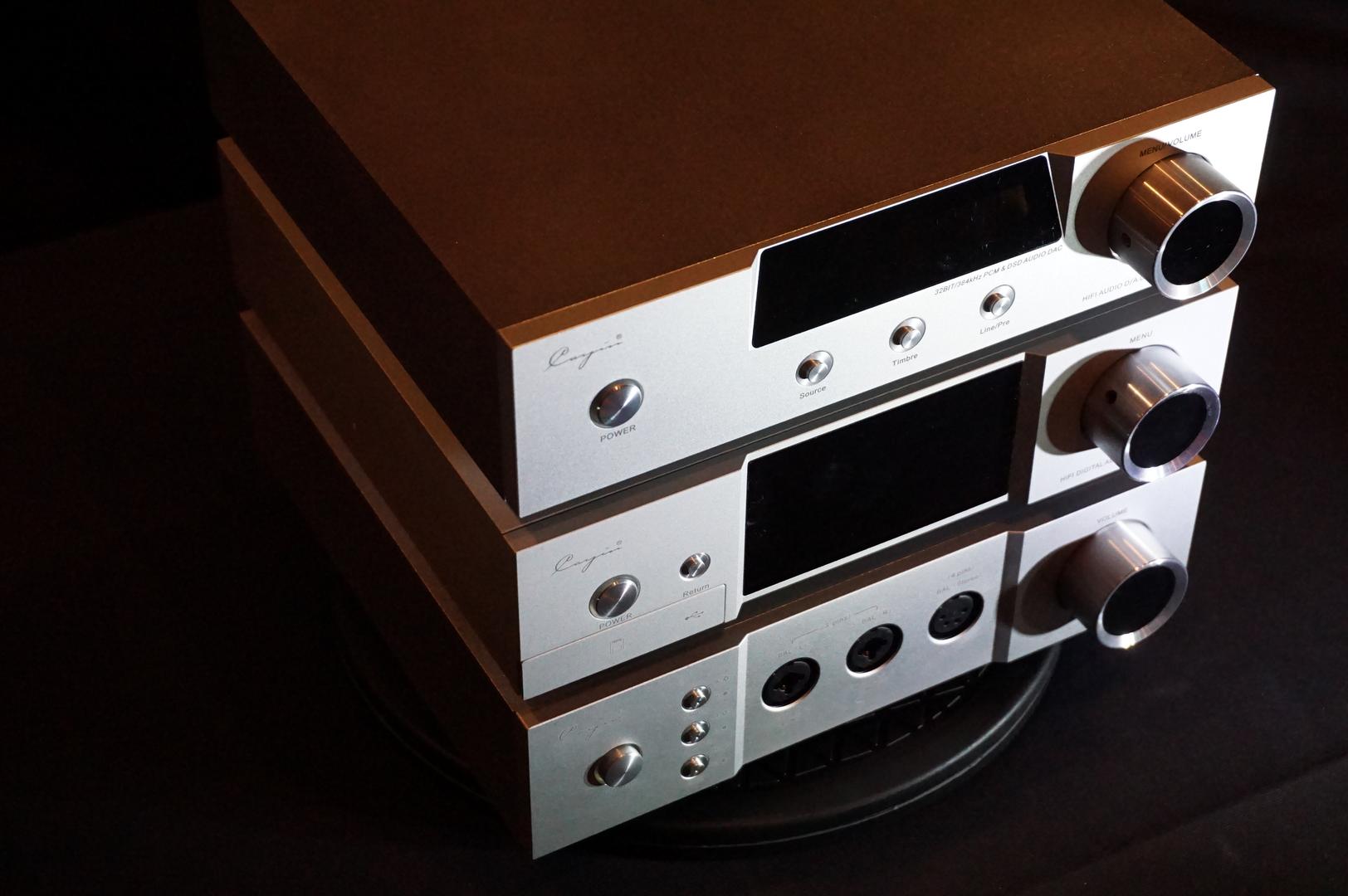 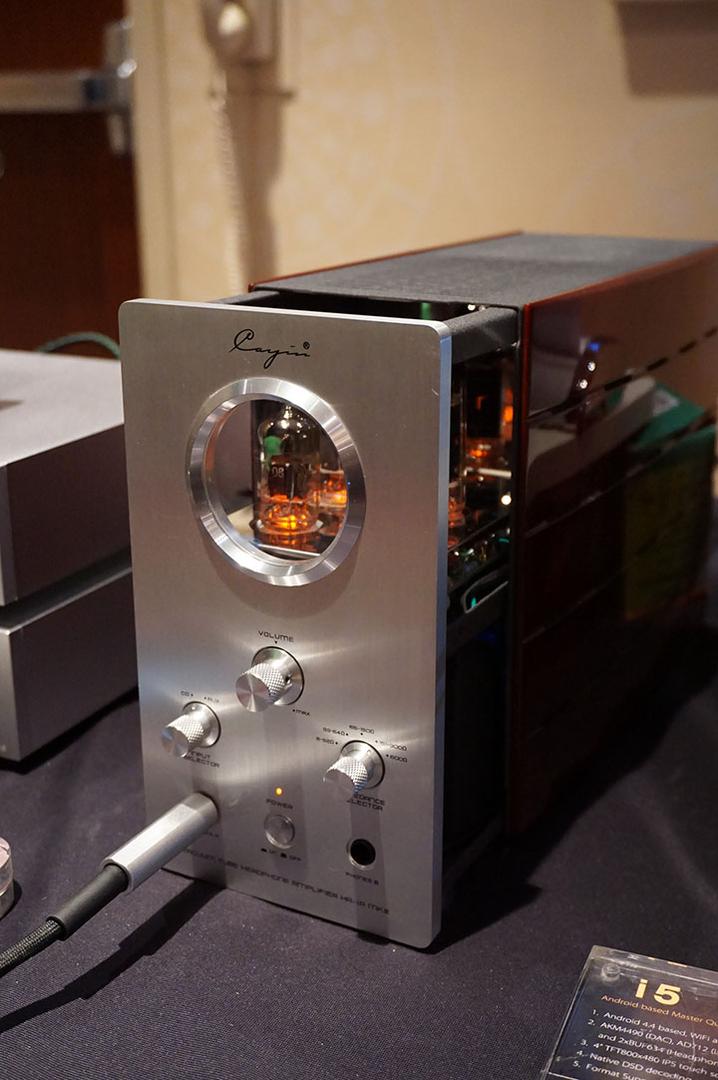 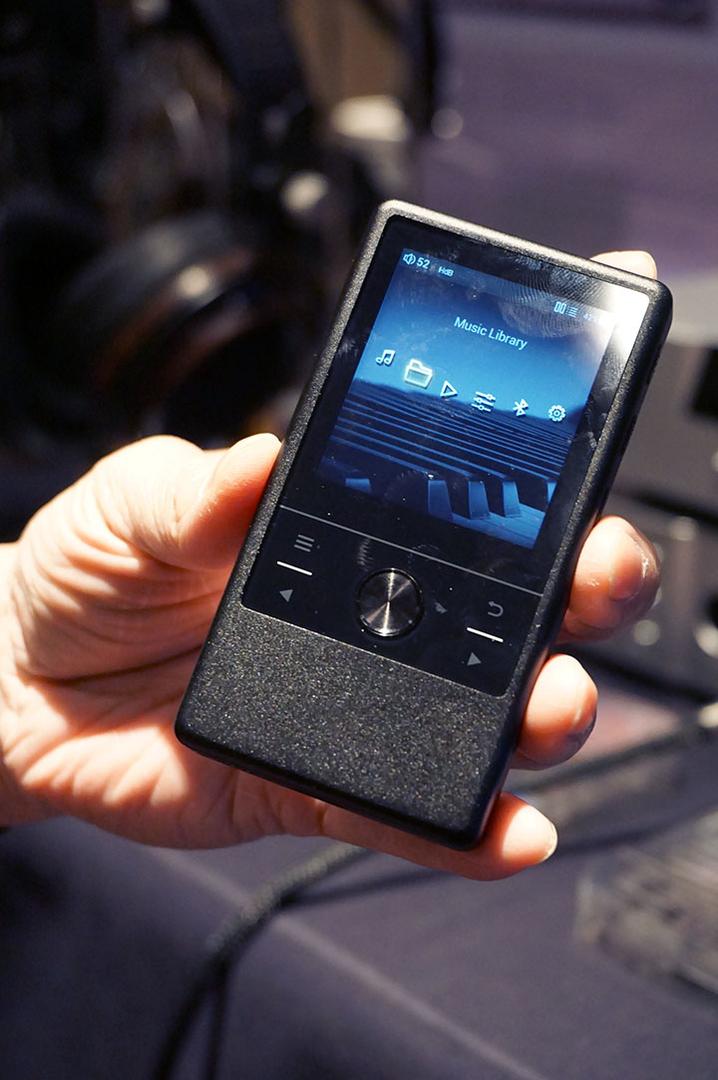 Cayin also showed its larger and more capable, Android 4.4-based I5 DAP ($499), whose DAC section provides 32/384 decoding for PCM files and native decoding of DSD files, with WiFi, Bluetooth, and USB connectivity options, plus 32 GB of built-in storage plus space for a micro SD card with capacity up to 200GB. Completing the picture is the standard HiBy Music Player app. 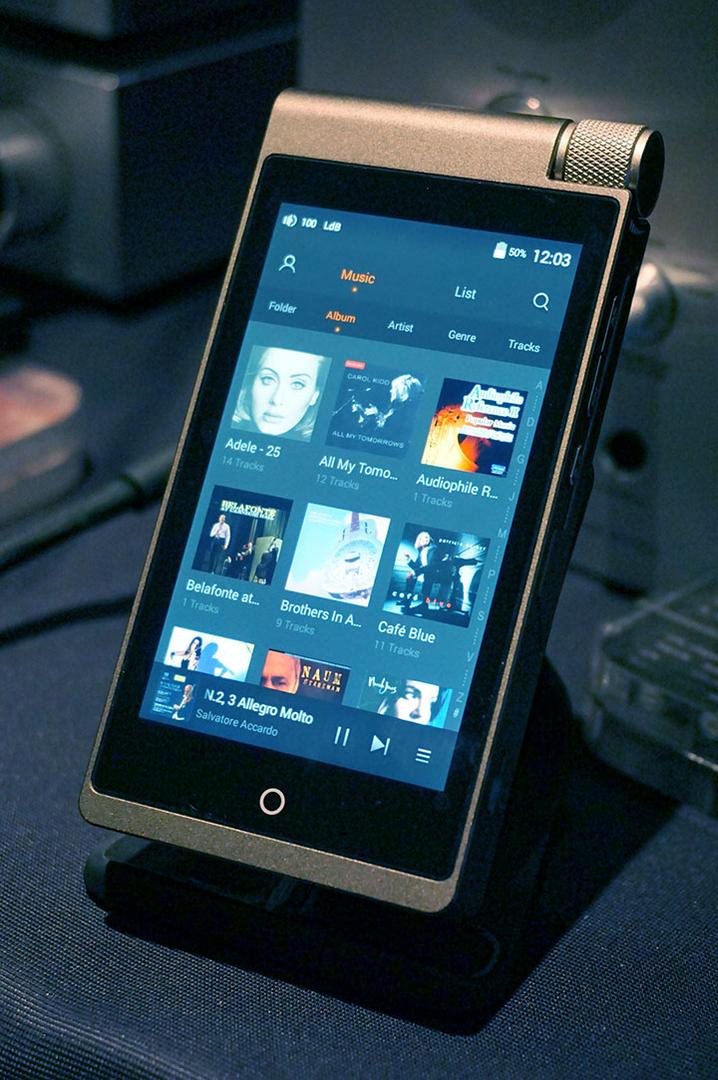 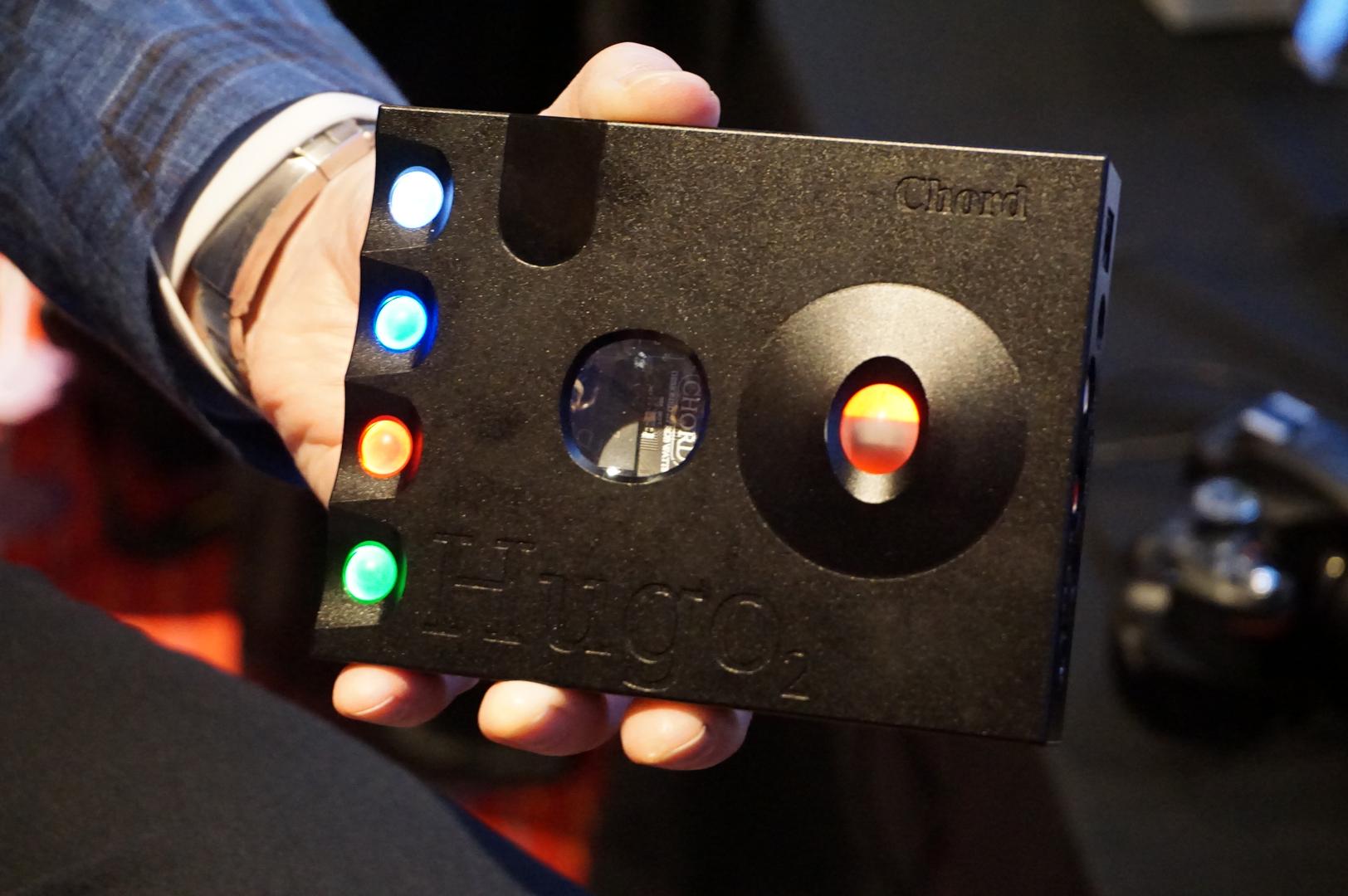 The Hugo 2 and Mojo/Poly combo were both big hits at CanJam NYC, with queues of listeners waiting for a turn to try them. I predict both products will be a commercial success, with the Poly, in particular, giving the Mojo a kind of go-anywhere/play-anything flexibility that no portable amp of the Mojo’s stature has ever had before.

Cleer is a new-to-me headphone manufacturer that took CanJam NYC as an opportunity to gather user feedback on the three full-size headphone designs it has created thus far: the entry-level DU ($130), the DU wireless ($199), and upcoming NEXT, which is a semi-open-back headphone fitted with dual 40mm MG drivers (projected price, ~$699). I felt the NEXT showed promise (plus a few rough edges that still need to be worked out), so that it will be interesting to follow the development of the model as it makes its way to the marketplace. 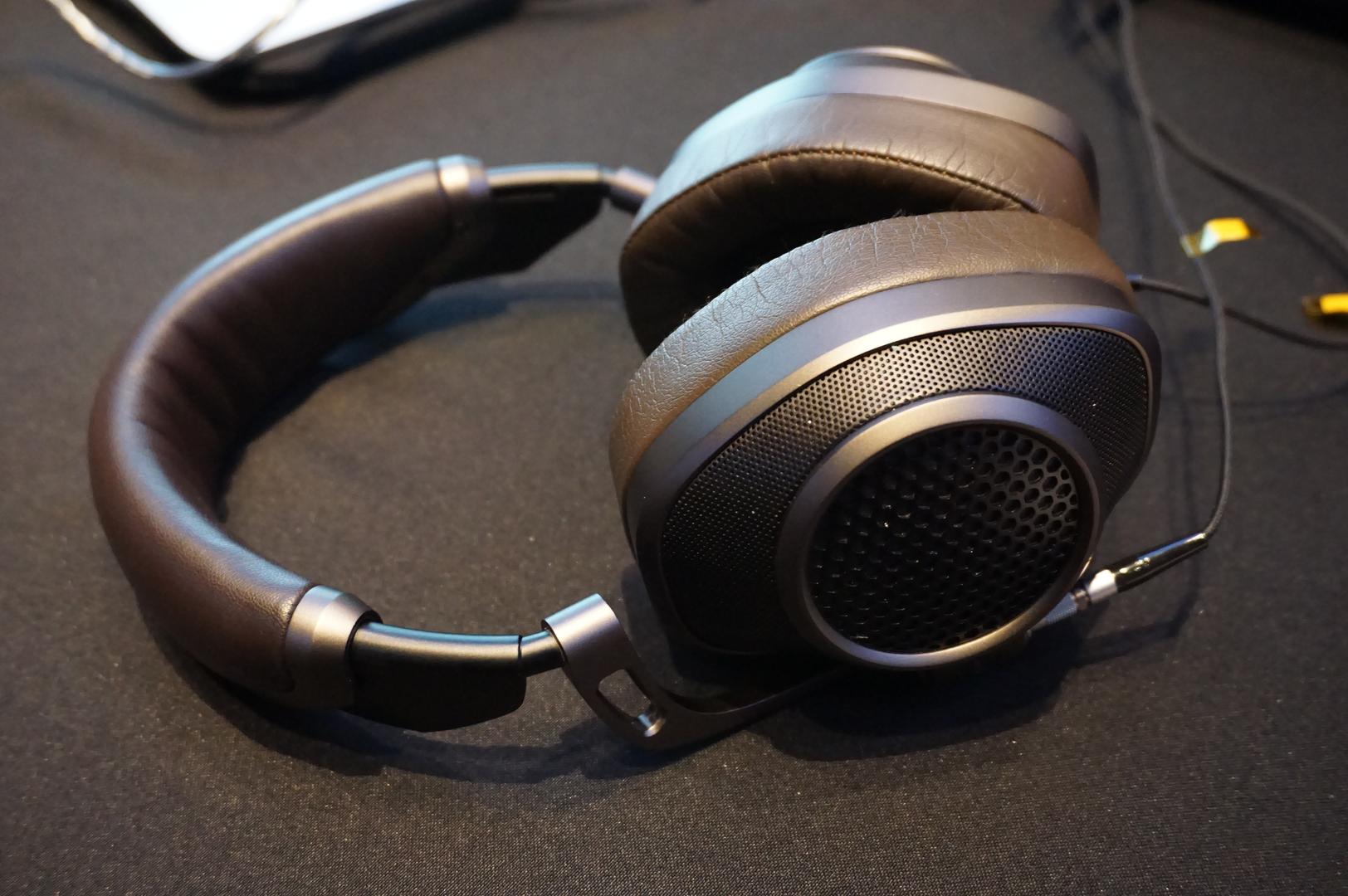 Many manufacturers and earphone enthusiasts look to Comply for memory foam ear tips that absolutely, positively will provide a comfortable and airtight seal—even in circumstances where traditional silicone-type ear tips just don’t seem to work. Keeping pace with changing times, Comply took the opportunity to release its new True Wireless ear tips ($20), which feature a deliberately reduced tip length that makes for a better fit on many of today’s more popular Bluetooth earphones. 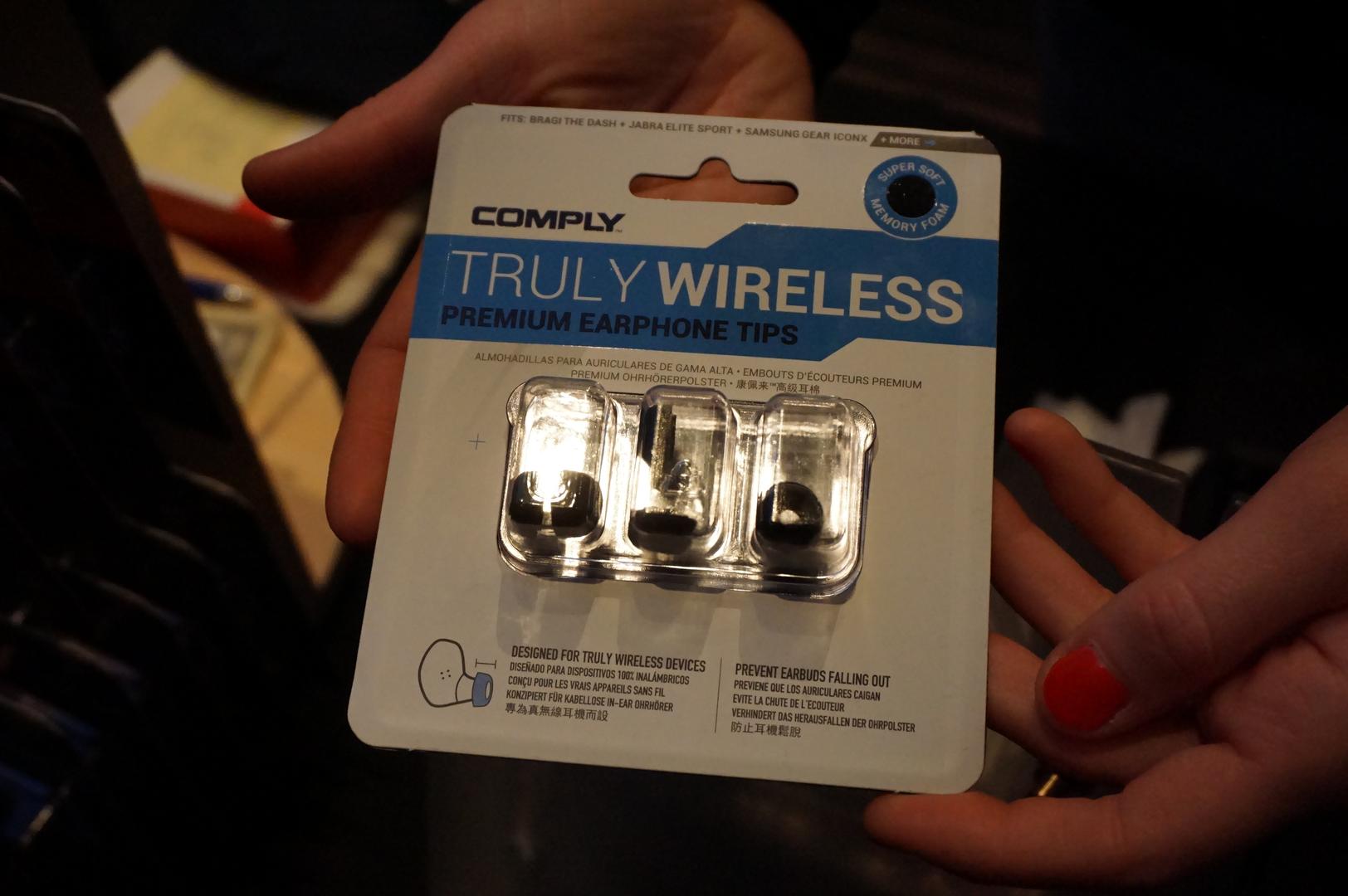