Hegel Music Systems has been on a roll. Since my review of the H100 integrated amplifier in September 2010, the Norwegian company has released three DACs, a preamp, a headphone amp/DAC, a power amp, and two integrateds, as well as updating a power amp already in the line. Hegel strikes me as a company driven by original engineering aimed at offering the highest possible sound quality at reasonable prices. The company’s $15,000 H30 may raise some eyebrows on that score. It is worth noting, though, that given the H30’s high performance level, Editor-in-Chief Robert Harley said in his Issue 223 review, “The Hegel H30 is not just a great-sounding amplifier; it’s also a tremendous bargain.” Elsewhere in TAS, Associate Editor Neil Gader had some very nice things to say about the 250Wpc H300 integrated in Issue 233. Hegel’s H200 integrated amp, which I reviewed in 2011, won Product of the Year, and the H300 received two Golden Ear Awards in 2013. Hegel has been busy indeed, and its efforts have been well received by consumers and the audio press.

In general, Hegel products are user-friendly, offer good value, and hew toward understated cosmetics, as if to say, “We let the music do the talking.” The 75Wpc, solid-state H80 integrated amplifier with onboard DAC is a case in point; it allows a lot more of the music to “do the talking” than I thought possible for $2000. On the nuts-and-bolts side, it has three analog inputs (one balanced, two unbalanced—one of which can be configured as a home-theater bypass), and five digital inputs (two coax, two optical—both types supporting 24/192—and one 24/96 USB. The small supplied plastic remote operates normal preamp functions and also includes buttons to skip, go back, play, and pause through the attached computer’s playlist—with most media players and only via the USB port. A much nicer metal remote is available as an upgrade for $180. I recommend it.

In a way, the H80 is a perfectly ordinary-looking, average-sized, minimalist integrated amp. Closer inspection reveals a nicely finished product, weighing about 24 pounds with a gently curved, glass-blasted faceplate and control knobs—input and volume. In a departure from other Hegel integrateds, the H80’s power switch is located on the bottom of the chassis in the front left corner instead of in the center of the faceplate just below the display. This makes more room on the H80’s faceplate for a larger display which, by the way, can be easily read from across a fairly large listening room. 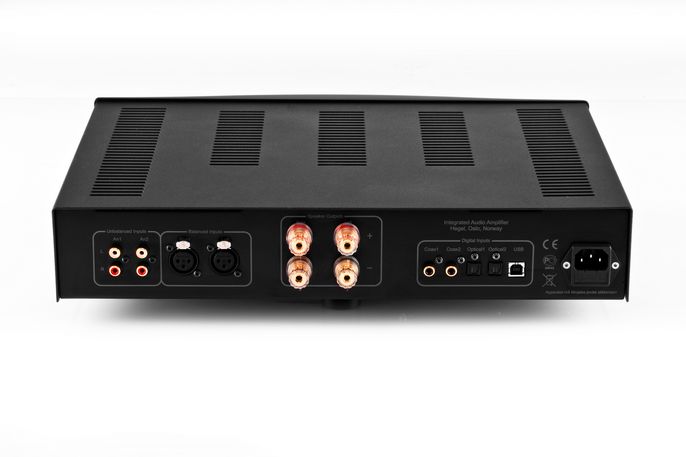 The sound of the H80 is not ordinary at all, though. It delivers a nice measure of musical verve, accompanied by a lack of listener fatigue that one rarely encounters in $3000 integrateds—let alone in one priced at $2000. Conversely, many integrated amps near its price with a low listener-fatigue factor too often also sound overly polite or reserved. The H80 is musically involving, well balanced, and surprisingly powerful for its power rating. While I realize that an amp’s nominal output figure doesn’t necessary tell the whole story when it comes to its ability to drive real-world speakers, I really wasn’t quite prepared for the sense of power the H80 can deliver—even while driving the 85dB-sensitivity, 4-ohm Dynaudio C1 II. In a word, it sounded more “commanding” than I expected. It imparted commendable bass extension and control, maintained its baseline tonal balance during difficult music passages, and served up plenty of rhythmic drive. Some of my sense of its outsized power delivery may be the result of a greater-than-1000 damping factor. (Damping factor represents a measure of an amplifier’s ability to control a connected woofer and is related to the amp’s output impedance.) When pushed beyond its output power envelope—and at fairly loud volume levels, mind you—the bass-heavy synth lines in Bjork’s Greatest Hits version of “All is Full of Love” [Elecktra] or the dense climaxes in various movements of Stravinsky’s Rite of Spring [RR] could become grainy and unstable. Even so, the H80 sounded considerably more composed than I had a right to expect from a 75Wpc, solid-state integrated amp.

The overall tonal balance of the H80 is very similar to all the other Hegel amplifiers I have used in my own system: H100, H200, H300 integrateds, and H30 power amp. That is to say, the H80 sounds neutral without glare, harshness, or graininess—unless, as already noted, the amp is pushed beyond its over-achieving power limit. In general, Hegel amps have a marvelously clear and smooth quality but do not realize that smoothness by sounding rolled-off or veiled. The H80 is no exception. It sounds tonally even-handed and texturally smooth while transmitting enough resolution to allow a wide selection of musical nuances to come through with their “essence” intact. Predictably, you will notice better resolution, refinement, power output, and soundstaging— especially the rendering of depth—as you move up the Hegel amplifier line. As such, the H80 still offers a commendable level of the company’s characteristic neutrality and smoothness at a relatively low price.

I omitted the H100 in the above comparison because I no longer had one on hand, but I recall the H100 I reviewed in Issue 206 as sounding very smooth and beautiful but also noted some “reticence” in its delivery, as if it were a bit hampered in rhythmic timing. Happily, I can report the H80 is not at all reserved or reticent. In fact, I consider its agility and deftness of timing to be among its greatest strengths. The H80 is just plain fun to listen to. It ably communicates much of the natural liveliness in music and does so without any associated leanness or “presence region” emphasis, which wear poorly over time. For example, Alanis Morissette’s “That Particular time” on Under Rug Swept [Maverick] retained the recording’s forward emphasis of Morissette’s upper register but without veering into piercing territory, as some amps do. The forward momentum of the next cut “A Man” was also well served as drummer Gary Novak switches from hi-hat to ride cymbal at about the 3:24 mark. The clangy sheen of Novak’s ride cymbal came through but did not become strident. Essentially, what you forgo by opting for the H80 over a H200, H300, or one of Hegel’s pre/power combos amounts to some omissions of overall resolution, power reserves, and rendering of depth rather than intruding sins of commission like an unnatural tonal emphasis, a fatigue-inducing glare, or some other characteristic that registers as anti-musical.

The H80 creates a soundstage of respectable width and depth for an amp of its power rating and price. In my setup, its listener perspective was roughly in the front section or mid-hall, and the soundstage started just behind the speakers and filled in rearward from there. I mentioned a perception of depth-foreshortening compared to Hegel’s more expensive offerings more to illustrate what you get when you move up the product line, rather than to draw attention to a shortcoming in the H80 per se. I consider the H80’s depth portrayal to be better than most other solid-state integrated amps in its price category. I believe it is unrealistic to expect truly fleshed-out depth presentation from a solid-state integrated amp that includes a DAC for $2000.

Speaking of the DAC, it’s a really good performer. I compared it to Hegel’s stand-alone HD20 ($2000) and could not discern appreciable differences. The HD20 may have a bit more body and weight, but my impression could be influenced by cabling differences just as much has anything else. This is truly impressive performance from the H80’s DAC, apparently a scaled-down version of the DAC found in the H300 integrated amp reviewed by Neil Gader in Issue 233. I tried both the USB and SPDIF input on all three DAC sections (H80, H300, and HD20) and preferred SPDIF, in all cases, for its greater liquidity and clarity. The H80’s USB input supports 24/96 files and, as mentioned, allows the remote to control most media-player functions like play, skip, back, and pause. The two coax/SPDIF and two optical inputs support 24/192 resolution files but do not allow the remote to control any playlist functions. (I kept all playback set to 24/96 to maintain the same resolution as that of the USB port for my comparisons of USB vs. SPDIF). I didn’t try the optical inputs. Hegel DACs are about as easy to set up as they come; “plug and play” really does sum it up. My PC recognized whichever DAC I plugged into within a second or two, and I could then resume music playback for fairly quick side-by-side comparisons. 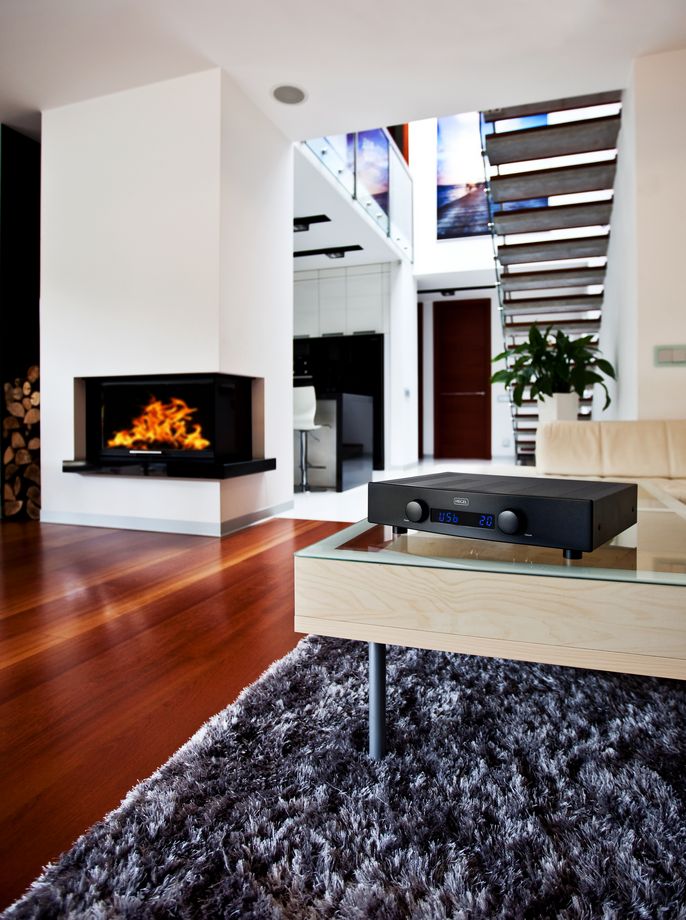 Hegel has leveraged some new technology derived from its P20 preamp into the H80 and employed a price-scaled implementation of Hegel’s patented SoundEngine technology in the power amp section. SoundEngine uses a feed-forward technique (instead of feedback) to reduced distortion as the signal passes from one amplifier stage to another, and, apparently, also greatly reduces crossover distortion (as the positive and negative halves of the signal switch over to each other). The isolated voltage input gain stage and output current gain stage have their own power supplies, and Hegel uses a rigorous parts-sorting protocol to make sure complementary device pairs are closely matched. Chief designer Bent Holter told me at CES 2014 that Hegel is taking a relatively low profit margin on the H80 to keep the price at $2000. Judging by the H80’s build and sound (and Holter’s straightforward manner), I have no reason to doubt him.

The H80 represents much of what is right in the high-end-audio scene. Those who are (sometimes justifiably) frustrated with escalating prices, take heart; the Hegel H80 answers the call for high-performing audio kit at a very reasonable price. No, it does not have the seamless liquidity, high resolution, and fundamental solidity of the more expensive stuff, but it gets you enough of the high-end essence to be more than a great place to start. I hope more people will participate in the deeper enjoyment of music in their homes because products like the H80 make it more accessible. The H80 is the real deal…and a sweet deal, too.