In Arthur Conan Doyle’s short story “A Scandal in Bohemia,” Sherlock Holmes receives a note explaining that a gentleman wishes to visit that evening to consult him about an urgent matter. “This is indeed a mystery,” Dr. Watson says. “What do you imagine that it means?” Holmes responds, “I have no data yet. It is a capital mistake to theorise before one has data. Insensibly one begins to twist facts to suit theories, instead of theories to suit facts.”

It’s an observation whose force came home to me as I listened to the Hegel H160 integrated amplifier. At $3500 (about the same price as some of the power cables in my system), it would be easy to assume that the Hegel H160 would badly compromise the sound of my pricey Wilson Alexandria XLF loudspeakers. But it didn’t. The Hegel, like a lot of reasonably price gear on the market, provides a potent reminder that nothing can be a bigger mistake than to theorize before you’ve actually heard a piece of gear, allowing your presuppositions to, as Holmes quite rightly put it, fit the facts to your theory, rather than approaching new audio gear in a spirit of impartial inquiry.

Much as with the remarkable Jadis DA88S integrated amplifier—whose price, by the way, was recently reduced, perhaps as a result of the strong U.S. dollar—I recently reviewed in TAS, I was quite smitten by the Hegel, but in a very different way. Where the Jadis floored me with its superb dynamics and color saturation of timbres, the Hegel brings a different set of strengths to the table, and at an even lower price point. I couldn’t help thinking as I listened to it that the Hegel H160 had no business sounding this pristine, neutral, commanding, and, above all else, unobtrusive. Auditioning it helped me to appreciate why earlier Hegel units have regularly received such positive notices in TAS, particularly from my esteemed colleague Kirk Midtskog. I’m almost tempted to say that, in the true Hegelian spirit, it achieves an enticing synthesis of sound, combining precise imaging with an extremely relaxed and byssine sound.

Hegel itself places a premium on the technology that it calls SoundEngine to reduce distortion in its equipment. It’s not clear to me exactly what “SoundEngine” means, and Hegel itself is rather coy about the technology, though the company does emphasize that SoundEngine doesn’t employ any global negative feedback. Instead, Hegel talks about a “local error”-cancelling system in the audio stages that is supposed to produce a purer sound. [See RH’s interview with Hegel founder Bent Holter in Issue 223 for details on Sound-Engine.—Ed.] 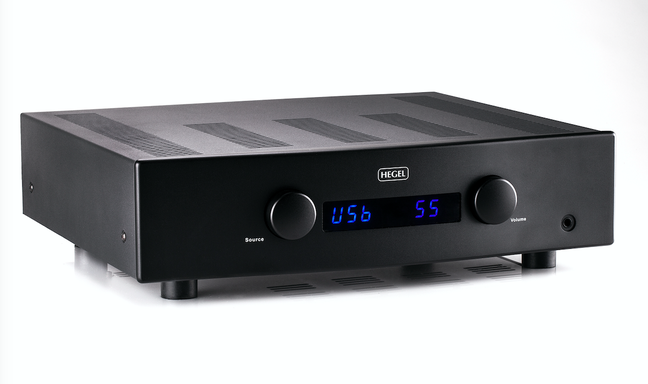 Certainly, the company has kept the unit itself pretty simple. On the front panel there are two knobs, one on the left side to select the source, the other on the right to control the volume. Most of the action takes place on the rear of the unit, where you’ll find a variety of digital and analog inputs—as well a set of balanced inputs. The H160 also has the ability to stream music wirelessly.

Why did I use the word “unobtrusive” to describe the Hegel? This might sound like a case of damning with faint praise, but it isn’t. The overall presentation was unobtrusive in the sense that, while there was plenty of grip, there was also a relaxed sense of musical flow. Nothing sounded etched, forced, compressed, or grainy—this last a trait I strongly associate with gear at this price point from an earlier age. Believe me: If there were some nasties this integrated amplifier produced, they would’ve come through loud and clear with the likes of the dCS Vivaldi at the front end and the Wilsons at the back (with Nordost Odin speaker cables in between). Now you might say the rest of this system constituted overkill, but it also allowed me to hear, to the fullest extent possible, what the Hegel was capable of. Which is a lot.

On a disc that’s been in frequent rotation in my system, the inimitable Leonard Cohen’s Popular Problems, I was instantly and favorably impressed by the capacious size of the soundstage that the Hegel produced. Cohen’s gravelly voice was accurately rendered, with each syllable clearly enunciated even as cymbal hits clearly resonated in the background. There was no foreshortening of the soundstage here. There was no smearing, no blurring, pretty much no nothing to disturb the illusion that Cohen had decided to pop by for an afternoon in my listening room.

Another thing that has to be said is that, while the Hegel likes to play music, it isn’t playing around. Which is to say that its bass definition is stellar. On the Cohen cut “You Got Me Singin’,” for example, the thump and precision of the bass lines were emphatic and linear, as they should have been.

At the same time, the Hegel skillfully unraveled more complicated musical passages with aplomb. In this regard, it performed very well indeed on the SACD From the Imperial Court, which consists of Renaissance music composed by Spanish and Flemish polyphonists for the House of Hapsburg. This Harmonia Mundi disc is exceedingly well-recorded (no surprise there!); still, there was no doubting that the Hegel did a marvelous job of separating individual voices as well as capturing dynamic distinctions with great fidelity. I was particularly impressed by the luminously reproduced pianissimos in the treble on the song “Magnificat primi toni,” composed by Nicolas Gombert. The Hegel offered a sense that the sound was ascending into the ether with ease and delicacy.

That sense of delicacy also came through on one of my favorites, Doc Cheatham and Nicholas Payton [Verve]. On the cut “How Deep Is The Ocean?” many of the virtues of the Hegel were immediately on display. The trumpets never became pinched or abrasive; rather, their blat was lifelike, and the articulation, particularly the way Cheatham likes to slur, bend, and twist notes, was very apparent. Nor was there any wiggle room on pitch definition. At the outset of “Jeepers Creepers,” for example, the Hegel 160 nailed the opening trumpet flourish, which emerged with a bang.

The clarity of the Hegel also meant that it captured the rhythmic drive of the Cheatham/Payton ensemble with estimable fidelity. There was a jaunty quality to the music, an ability to clearly reproduce the interplay among the instrumentalists, that endowed the entire album with a real sense of drama. You could clearly sense the emotional buildup on the song “Stardust,” (which the liner notes indicate Cheatham liked to call “Stardust Rhapsody”). On “Save It Pretty Mama,” the sonority of Jack Meheu’s clarinet was hauntingly plangent.

What all this suggests is that the Hegel was getting superlative microdynamics that create the illusion—for that, after all, is what we’re talking about—of a live performance, where you’re drawn emotionally into the music enough to suspend disbelief. That is what the Hegel H160 did for me. As a trumpet player myself, I became engrossed by each trumpeter’s technique, tone, and, at bottom, imagination. 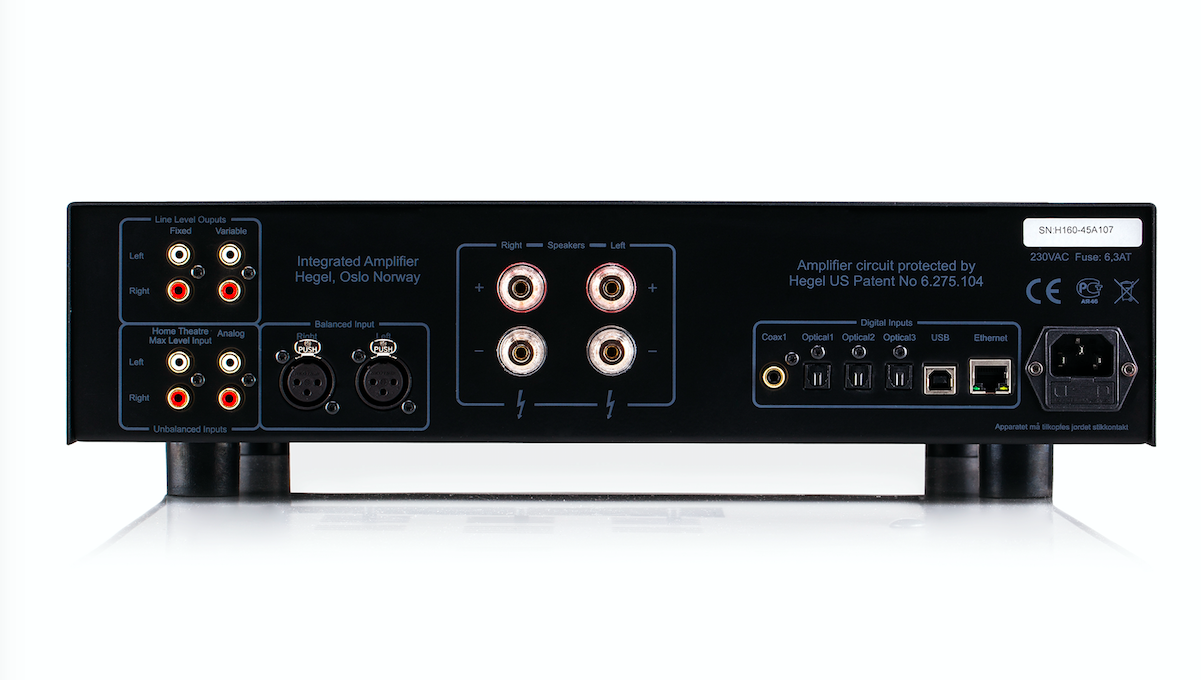 Let me say clearly that I’m not suggesting that this beauty offers performance on par with the big boys at five or ten times its price. The Ypsilon SET 100 Ultimate amplifiers, particularly after extensive upgrades performed by Demetris Baklavas in March, ascend into the empyrean sphere of musical reproduction. The Boulder 2050 amplifiers, which clock in at close to $100,000, are also in a different sphere.

What I am saying, however, is that it’s not like I was discombobulated by the sound upon inserting the Hegel. Quite the contrary. The quality of the Hegel’s reproduction of music was most impressive, particularly when you take into account that it is, by high-end standards, a real value.

If you’re looking for an integrated amplifier that doesn’t reside in the Himalayan region of audio pricing, then the Hegel fully deserves an audition. To be sure, tube-lovers would be better advised to consider something like the Jadis. But the Hegel offers superbly linear, coherent, and engrossing musical playback. It doesn’t take a Sherlock Holmes to detect that this is a very special piece of equipment.

Be your own Vinyl Guru