I don’t know Alan Shaw personally, but on the basis of Harbeth, the company he has owned for many years, and the speakers he has authored, I’d guess that one of his missions in life is to preserve and perfect the BBC school of speaker design.

As early as the 1940s, the British Broadcasting Corporation engaged in systematic research of loudspeaker performance with the eventual aim of designing and manufacturing speakers for monitoring broadcasts and recordings. Flat frequency response, natural tonal balance, low coloration and distortion, and unit-to-unit consistency were the design parameters, with the goal to accurately reproduce voice and music in professional and domestic (as opposed to anechoic) settings. From the mid?fifties through the seventies, most well?regarded British speakers, among them Quads, KEFs, and B&Ws (and those of the so?called “New England” school in America, such as Acoustic Research and KLH), basically subscribed to the BBC philosophy, and several classic products were direct offspring of its research, including the Spendor BC-1, BC-3, and SP1/2, and the Rogers LS3/5a. Many audiophiles would also put Alan Shaw’s Compact 7 in this group. 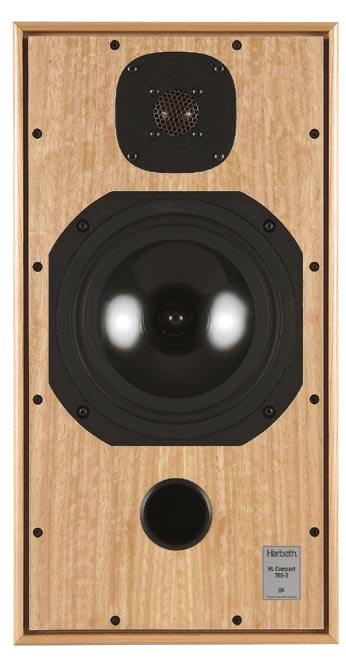 Introduced in 1988, the original HL Compact 7 was the first model to use Harbeth’s Radial, a patented, propriety synthetic compound—now widely used in the company’s woofers and midrange drivers—that Shaw considers far superior in resolution and low coloration to the polypropylene that Harbeth’s founder, Dudley Harwood, pioneered at the BCC. Shaw introduced a revised Compact 7 in 1999, with incremental improvements. When he turned his attention to it yet again last year, the result was to advance an already excellent design to an even higher level. How much higher? I’ll make a naked grab for your attention: between about 80Hz and 10kHz there is nearly nothing wrong with the frequency response of the 7ES-3. A couple of absolutely miniscule glitches and anomalies remain, but they do not matter, as they are scarcely audible even with critical listening. Indeed, for sheer neutrality the 7ES-3 rivals the Harbeth Monitor 40 (my colleague Robert Greene’s reference), and in the 2kHz– 4kHz range even trumps my reference Quads—by a very tiny margin to be sure, but a deuce trump is still a trump.

Pulling out every source by which I judge neutrality and tonal accuracy, I was soon scratching my head for adverse characteristics on which to pin adjectives. As with Quads, each and every recording sounds unto itself, not like any other. John Langstaff ’s Christmas Revels [Music Sales Corp.]—I am writing this during the holidays—is as raucously joyous a celebration of the season as you’ll hear anywhere, with the most motley collection of olde instruments since David Munrow in his prime, with sticks, swords, a sackbut, a rebec, a serpent, a lyzarden, a hurdy-gurdy, something suspiciously reminiscent of P.D.Q. Bach’s notorious windbreaker, and a tubby tympanum that really should sound a little tubby. At the outset a lonely recorder wanders forward from deep in stage left, then crosses to disappear stage right, his mournful tune reminding us that this festive season is also darkened by the shortest days, the longest, coldest nights. But soon other revelers appear, called to attention by Room (the first character of the Mummers’ play Saint George and the Dragon), who bangs on a can, exhorting all to make merry with song and dance, his voice ricocheting off the side and rear walls. The 7ES-3s present this spectacle so vividly as to recall the original meaning of stereo, i.e., solid, the positions and movements of the players practically diagrammable, if, that is, you can even think about such things faced with so intoxicating an entertainment.

Equally infectious is Joel Cohen’s Nonesuch classic Sing We Noel: The several voices that perform solos, duets, trios, or in small groups are clearly distinguishable one from another. On one extraordinary track (5), a speaker is firmly in the left channel, reading the Annunciation, while in the right he is answered by a soprano singing a related 13th-century carol. The antiphony is easy to reproduce; what isn’t, but which the 7E-3 reproduces perfectly, is the rich church?like ambience, which is clearly audible across the soundstage. Eventually instrumentalists and other singers join in to fill the space, yet they should never obliterate our sense of that enveloping acoustic.

It’s recordings like these that make me question the priorities of audiophiles who relegate accuracy of timbre to secondary status. How are the richness and color of instruments, voices, ensembles, and textures to be reproduced in all their infinite variety and beauty if a loudspeaker has less than accurate reproduction of timbre? What do dynamics, imaging, detail, transparency, and the like matter if voices and instruments don’t sound like themselves?

No more beautiful violin sound has ever been recorded than the Sitkovetsky Goldberg Variations or Beethoven’s Pastoral in Bernstein’s Vienna recording—the one clean, transparent, slightly astringent; the other brilliant yet sweet and meltingly lyrical. I’ve heard some highly praised speakers make damned travesties of these recordings. Not the Harbeths, which reproduce them with the beauty of truthful timbre.

Familiar instrumentalists like Sonny Rollins on Way Out West [Contemporary] are rendered lifelike, lively, and nearly life-size, with every whispered, grunted vocalism of the players instantly audible. Familiar singers—Frank Sinatra, Ella Fitzgerald, Mel Tormé, Rosemary Clooney, Harry Belafonte—emerge in all their storied individuality, their distinctiveness experienced anew. And the 7ES-3 lets you hear how artificial a big?time pop production like Tony Bennett’s Duets is; but it also lets you enjoy what a really good piece of artifice it is. And, wow, do the singers ever come across with heart, vitality, and conviction: “Lullaby of Broadway,” with the Dixie Chicks, is alone worth the price of admission, and Natalie Maines’ honeyed voice, projected to perfection, should allay any worries the 7ES-3 can’t boogey with the best— that first staccato note of the trumpet erupting like a whip crack. On the SACD transfer of Pink Floyd’s The Dark Side of the Moon [Capitol] the reverb in the second cut is plainly synthetic, yet how vast its spaciousness; once the voices enter, they seem actually surrounded by the created atmosphere, not artificially mixed into it. I cannot overstate how fantastically these speakers reproduce ambience, whether real or synthesized, large spaces or small.

If it’s transparency, coherence, and reach?out?and?touch?it immediacy that you’re after, I won’t pretend the 7ES-3 is the equal of my three generations of Quad electrostatics, but it comes breathtakingly close, which puts it streets ahead of most of the competition. Cue up Martha Argerich’s death?defying journey through Ravel’s Gaspard de la nuit [DG], and you may find yourself wondering what all that low-level clicking and ticking is: It’s Argerich’s fingernails, which she refused to trim, coming into contact with the keys. There is such detail here that when she lifts her hands off the keys you can hear the release of the mechanism connecting the hammers to the keyboard. Pianistically, musically, she performs miracles of nuance, shading, and touch, all of which demonstrate the 7ES-3s’ easy mastery of microdynamics—also macrodynamics when she unleashes her explosive, fiery fortissimos.

Problems? None to speak of, but there are two issues of limitations and one of tonal balance that require some talk. The 7ES-3 is by design a compact monitor, so its bass response and its ultimate loudness are perforce limited (a very different thing from flawed). It plays plenty loud and clean in my 22′ x 15′ x 8′ room, but like the Quads it resembles it’s not for headbanging. Shaw specs the 3dB point at 46Hz, which sounds about right and enables it to handle symphonic music superlatively. But on large-scale works buttressed with organ, such as Zarathustra, Mahler’s Eighth, the Organ symphony, etc., you may find yourself wanting more sheer bottom?end power and foundation than this eight-inch driver, fabulous in almost every other way, can deliver. But as the bass is otherwise so very smooth and well behaved, it responds nicely to judicious application of tone controls or other equalization. And you could always add a subwoofer (a REL or HSU should make a dandy match).

The tonal balance issue is best approached by way of previous Compact 7s. I was unprepared for how different they sound. Among major changes, the 7ES-3 has an updated tweeter, a new surround for the woofer, and a substantially redesigned crossover at a slightly lower frequency. The previous versions are a little recessed above the crossover, the effect being to push back the presence range and emphasize the midrange and lower midrange; the old tweeter is also brighter. This translates into a rather warm, even darkish sound, with a slightly edgy top, once response comes back up from the recessed presence range. This makes, for example, Sinatra’s voice sound darker and heavier. The 7ES-3 gets it right—preserving the baritone but restoring what upper-range lightness it has—because the presence region is now truly flat. Likewise so is the tweeter all the way out (okay, to be very picky, it’s got a little spice around 10kHz, but I do mean barely a pinch). The evolved Compact 7 can no longer be called either warm or bright. Not that it’s in any way lean, thin, or cool—I am slack?jawed that Shaw has achieved such high resolution and tonal neutrality without the 7s sounding in the least clinical, analytical, or edgy; merely that it suggests no bogus warmth (but see sidebar).

Previous Compact 7s remain excellent speakers, but this new one is a really great speaker. How great? Well, I’m not about to give up my Quads any time soon, but if forced to, I doubt I’d feel terribly deprived if 7ES-3s replaced them. Indeed, with respect to its class and design type— compact two?way in a box—this speaker sets, in my experience, a new benchmark in neutrality and natural tonal balance over its usable range, regardless of price. TAS