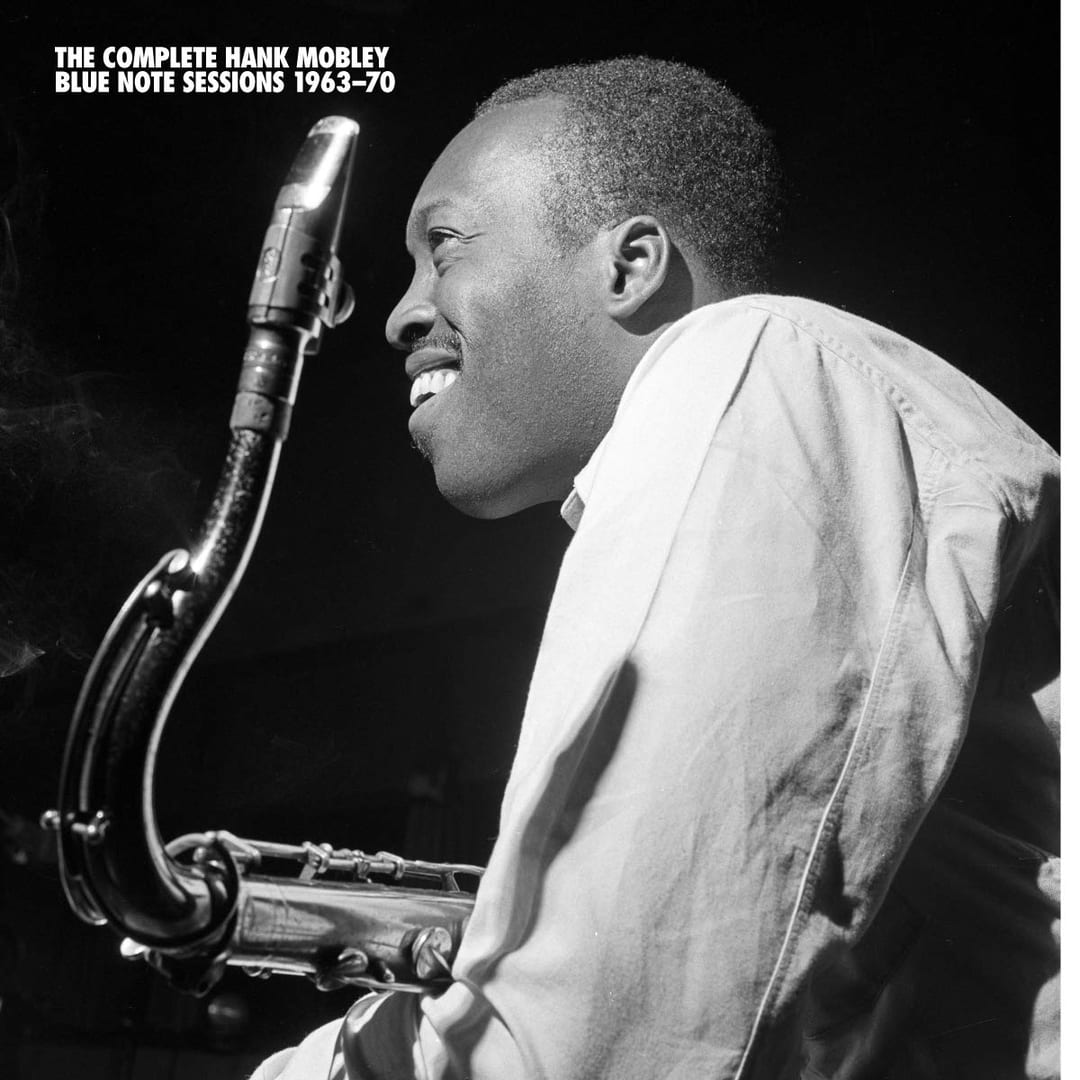 Although he never achieved the popular celebrity of such peers on the same instrument as John Coltrane, Sonny Rollins, or even Joe Henderson, tenor saxophonist Hank Mobley was indisputably one of the most valuable players of the hard bop era. Consider some of groups of which he was a member—Art Blakey’s Jazz Messengers, the Max Roach Quartet, the bands of Horace Silver and Miles Davis—and the many albums he headed on the Blue Note label. As writer Bob Blumenthal reiterates in his notes for The Complete Hank Mobley Blue Note Sessions 1963–70, Mobley became known as “the middleweight champion of the tenor saxophone.” Blumenthal posits that the phrase, coined by critic Leonard Feather, applies even more accurately to the fluent force of his playing than to his status in the ranks of jazz giants. And he rightly directs attention to the “lyrical sound, sophisticated harmonic and rhythmic ideas, melodically rich and structurally subtle original compositions” abundantly represented throughout these sessions from the second half of Mobley’s 16-year tenure with the Blue Note label. Until 1970, when he recorded Thinking of Home, the saxophonist was a pillar—perhaps the epitome—of the Blue Note sound and the hard bop aesthetic in general.

Mosaic’s 8-CD set picks up after Mobley had recorded three of his greatest albums, Soul Station, Roll Call, and Workout. Blumenthal argues that this new box set’s 1963 sessions for The Feelin’s Good (not released until 2012) and No Room for Squares should be considered part of Mobley’s “middle period” along with that prior grouping of LPs, and that Mobley’s “late period” is identified with his longtime association with drummer Billy Higgins, whose “spry yet dense beat” so adeptly supported Mobley’s “divergent moods.”

However you parse the continuum, what you get in these 74 marvelous-sounding tracks, mastered with 24-bit technology from hi-res files of the original analog masters, is a sumptuous survey of hard bop proving its staying power as modern jazz hurtled through the revolutionary changes of the 60s. Mobley didn’t so much build bridges between bebop and newly emerging styles of modal improvisation, free jazz, Latin jazz, and fusion as he did forge affiliations with many of the most important instrumentalists of his day. These sessions, which yielded No Room for Squares, The Turnaround, Dippin’, A Caddy for Daddy, Hi Voltage, Reach Out, The Flip, Far Away Lands, Straight No Filter, A Slice of the Top, Thinking of Home, and Third Season are studded with stars, including trumpeters Donald Byrd, Lee Morgan, Freddie Hubbard, Blue Mitchell, and Woody Shaw; pianists Herbie Hancock, Andrew Hill, Barry Harris, Harold Mabern, McCoy Tyner, and Cedar Walton; bassists Butch Warren, Paul Chambers, Bob Cranshaw, and Ron Carter; drummers Higgins and Philly Joe Jones. Only occasionally did Mobley veer from the standard quintet format. Of the notable departures, the ambitious octets of A Slice of the Top are far more successful than the pop tracks from the Reach Out session.

In the company of so many unique stylists, improvisers with their own ideas, and in the shifting textural contexts, there are two consistent through lines—Mobley’s crafty, catchy writing and his confident, vigorous, and tonally robust playing, elements of a voice still demanding and deserving to be heard after all these years.

Like most TAS readers, I first heard Patricia Barber, whose […]

Lowell Liebermann is one of the most widely admired, and […]