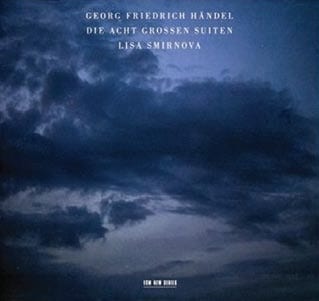 Handel isn’t known these days as a keyboard composer, but far more copies of his keyboard works were in circulation during his life than copies of Bach’s or Scarlatti’s. These suites are in fact similar to Bach’s, and nearly their equal. They’re generally a little lighter in tone, somewhat less introspective. The sunny fugue in Suite 2 has a few syncopations and sly moves put in almost jokingly—blink, and they’re gone; some melodies, like that in the Sarabande from Suite 4, are aching and gorgeous. The Prelude to Suite 5 is an elegant fantasia, and the “Harmonious Blacksmith” that ends it is charming yet assured; the arpeggiated opening to Suite 3 is dramatic but not heavy handed. There’s enough variety here that you can listen to a whole disc (there are two) at a time without getting tired of it. Smirnova has an enviably smooth touch when she wants it, and her articulation is tasteful; some people’s staccatos at the end of phrases sound like hiccups—hers, never. She plays a modern piano, and the sound is terrific. It’s easy at times to tell that the sessions were spread over two years because of the noticeable differences between suites; I think this gives them more individuality.