Audio components come and go over the years, but a few designs are so fundamentally correct from their inception that the product’s basic architecture cannot be improved upon. A prime example is the Antileon power amplifier from Gryphon Audio Systems of Denmark. Introduced in 1995, the amplifier is now in a third iteration—the Antileon EVO, reviewed here. Although it features upgraded parts and a few new design tweaks, the Antileon EVO’s fundamental DNA remains the same

That DNA is like a blueprint for creating a no-compromise stereo power amplifier: pure Class A operation, an absolutely unflappable power supply, an overkill output stage, and massive heatsinks. Add completely independent left and right channels (including transformers and power cords), very little negative feedback, balanced circuitry, fully discrete components throughout with no coupling capacitors, and lavish execution with spectacular metalwork and industrial design, and you have the foundation of an amplifier with potentially reference-class performance. All the basic design elements of the original Antileon are here in the EVO, but taken to the next level of execution.

The Antileon EVO is the very definition of a dreadnought—one look and you know that this amplifier means business. Although rated at 150Wpc into 8 ohms, the Antileon’s size, weight, and construction suggest an amplifier of five times that power output. But as we’ll see, such large hardware is required to ensure that the amplifier delivers its rated power in Class A operation. 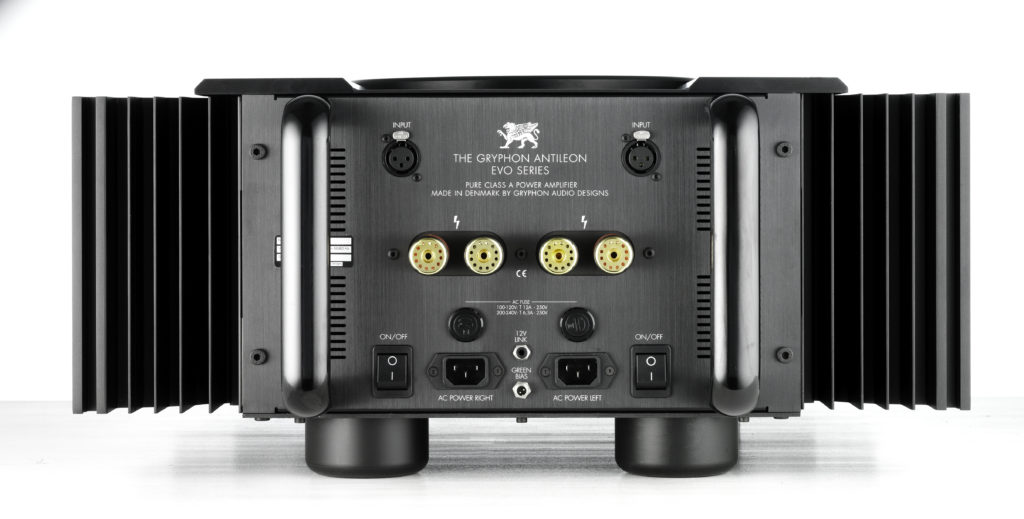 Before delving into the Antileon EVO, a little history is in order. Gryphon Audio Systems was founded in 1985 by Flemming Rasmussen, in the same way that many of the best high-end companies started—with the founder building a one-off, no-compromise component for his own use. In Rasmussen’s case, he created a phono preamplifier so that he could better hear exactly how the various phono cartridges he distributed sounded. When a Japanese distributor heard this phono- stage in a CES demo, he immediately asked Rasmussen to build a second unit for him. Unbeknownst to Rasmussen, the distributor loaned the phonostage to Japan’s prestigious Stereo Sound magazine, which promptly awarded the Headamp, as it was called, its highest honor. Gryphon Audio Designs was in business.

Thirty-six years later, Gryphon is a major manufacturer of a full line of electronics, sources, loudspeakers, and cables. Yet the mindset with which the company was started—building components without commercial constraint—is still alive and well. Although not that renowned in North America, the marque is revered in Europe and Asia. My only previous experience with Gryphon (other than at shows) was an exceptional one. In 2012, I visited Andy Payor of Rockport Technologies to learn more about how he designs and builds speakers (see my review of Rockport’s Altair in Issue 214). In his spectacular custom listening room, Payor played for me his flagship Arakkis loudspeaker, actively tri-amped with all-Gryphon amplification. The sound was transcendent. I wrote a blog about that experience, titled “The Best Stereo System I’ve Ever Heard,” which is exactly what it was at that time. Andy Payor is among a small, very elite group of the world’s top speaker designers who scour the planet for the best-sounding amplification. That he would choose Gryphon to demonstrate his flagship speaks volumes.

The Antileon EVO makes quite a visual statement apart from its sheer muscular bulk. The front panel eschews the typical flat faceplate in favor of polished black-acrylic panels flanking a hemispherical ribbed column. The polished acrylic adds a touch of elegance. A large sub-panel, partially recessed into the acrylic side panels, contains a row of buttons and a display. The left-most button turns the amplifier on and off. Turning the amplifier on automatically launches an elaborate test routine that checks the amplifier’s operating conditions before full power-up. This procedure is accompanied by flashing red indicators in the subpanel. After a few seconds, the test indicators go dark and the amplifier is ready for action. You can also manually run the diagnostic program by pressing a front-panel button.

In the near future, both SpaceX and Blue Origin are […]

Since its inception in January 2017, Fyne Audio has continued […]