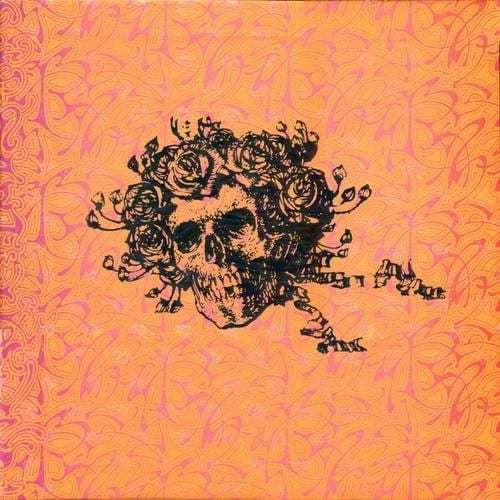 The Grateful Dead released five studio albums in a three-and-a-half-year span from March 1967 through November 1970. During that time the band morphed from a folk- and blues-based covers band into a highly experimental outfit known for long jams—as well as poster-children for San Francisco’s psychedelic scene—and then again into highly skilled songwriters and a surprisingly tight ensemble that, if not exactly like their friends Crosby, Still, and Nash, could even harmonize. The culmination of this period saw them release two beloved LPs that circled back to their folksy roots—one of them good, the other a masterwork.

It’s quite a musical legacy as well as one recorded diary of the band (the other, of course, is found in the Dead’s many live recordings). To coincide with the 40th Anniversary of the end of that stretch Rhino has packaged these records— The Grateful Dead, Anthem Of The Sun, Aoxomoxoa, Workingman’s Dead, and American Beauty—into a handsome box- set. Each LP’s cover has been meticulously reproduced, the 180-gram vinyl pressed at RTI from freshly-cut lacquers mastered from the original analog tapes by Chris Bellman at Bernie Grundman Studios, and a full-size booklet with a few never- before-published photos with brief but informative liner notes by Blair Jackson included. Also in the box are a poster and a 7″-single reissue of “Dark Star”/“Born Cross-eyed.”

The sound of this set of course varies from record to record, but it’s excellent overall, and at times a revelation. Alas, I don’t own original issues of all of these for direct comparison, only The Grateful Dead and Workingman’s Dead. My copy of American Beauty is MoFi’s very fine, remarkably rich sounding 1978 release. Anthem and Aoxomoxoa appear to be from the late-70s; and I also have on hand Rhino’s fine- sounding CD box-set, The Golden Road. (Also note that for the first time since shortly after their initial release, Anthem Of The Sun and Aoxomoxoa are presented again on vinyl in their original mixes.)

The Grateful Dead, though almost quaint at times, and not representative of the Dead live at this period, has a newfound energy and drive. Anthem, with its deeply layered mix of live and studio tracks— all penned by the band—captures the Dead’s on-stage presence, but goes beyond with a swirling, off-kilter vibe that succeeds in conveying a dizzying, psychedelic experience. Aoxomoxoa reflects the band’s increasing songwriting skills, and its flowering collaboration with lyricist Robert Hunter. Side One alone is mini-masterpiece, and only the bizarre “What’s Become Of The Baby” falls flat. Workingman’s Dead does an about-face: goodbye psychedelia, hello country-roots (and cocaine). American Beauty speaks for itself.

As one might guess, the initial releases of the first album and Workingman’s Dead sound closest to these new pressings. That said, close is no cigar. Especially when it comes to focus, overall clarity, balance, dynamic punch, and bottom-end weight, which are hallmarks of Rhino’s reissues. As to Phil Lesh’s marvelous and important bass playing—the clarity of line, and his round, almost creamy tone—is one of the great joys of this new set. These new LPs knock the others, including the CD box, right off my shelf.